Only Andal Can Decide Who She Is, Not Vairamuthu or the BJP

Is Andal a devadasi? Why, pray, is that Mr Vairamuthu's call to make?

Is Andal a devadasi? Why, pray, is that Mr Vairamuthu’s call to make? 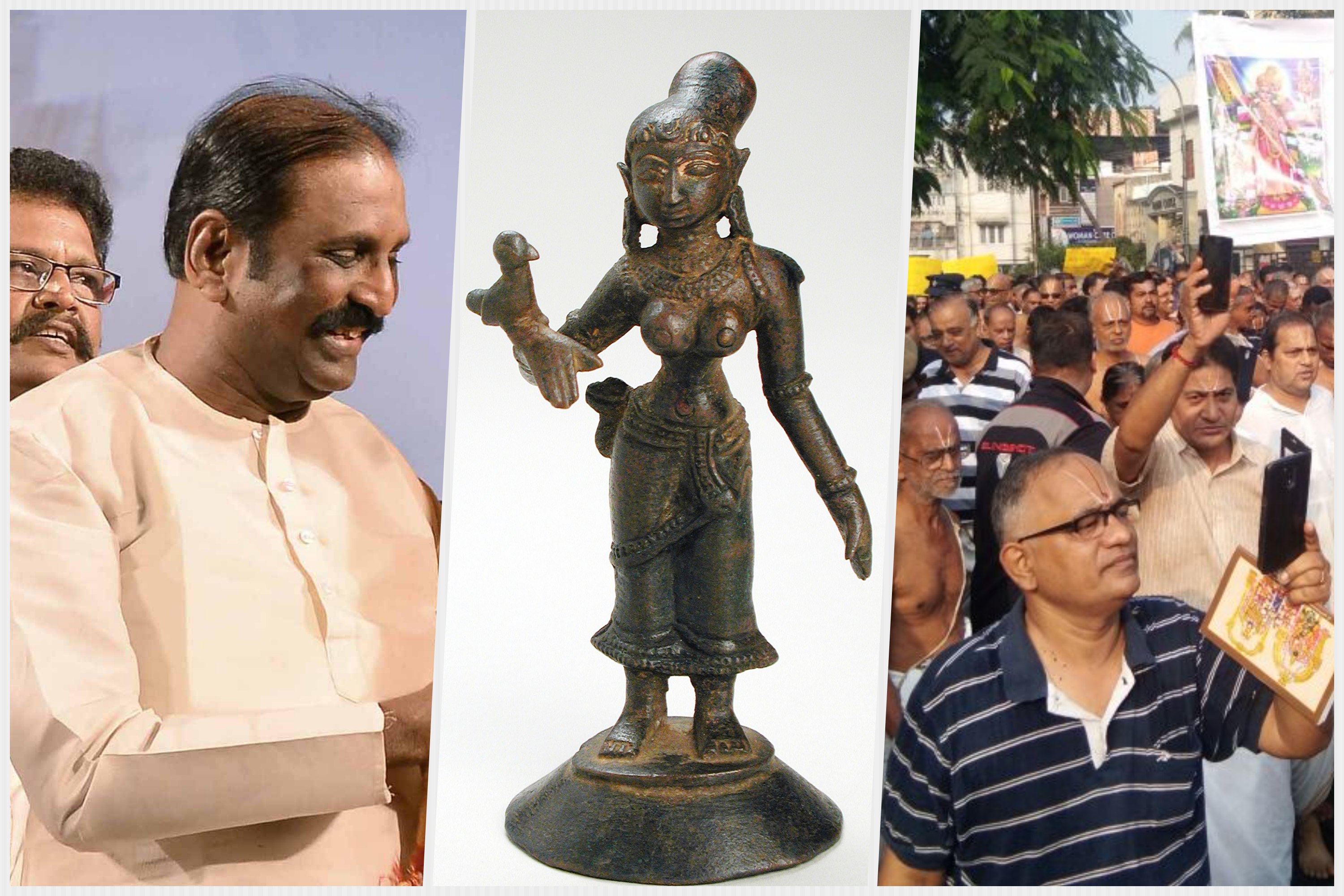 From left to right: Tamil poet Vairamuthu; sculpture of Andal; picture of protests in Tamil Nadu the past week over Vaiaramuthu writing that Andal may have been a devadasi. Credit: Wikimedia/Los Angeles Museum/Twitter

Some divine personas inhabit the realm where myth and history overlap. In that respect, Andal is different from divinities such as Rama. Hence, whenever anyone expounds on matters related to Andal’s provenance in the public sphere, he or she must present at least minimal evidence in support of their claim. This evidence could even be cited from oral histories. But the citing of such supporting evidence is essential.

Next, when we speak of a specific category such as the “devadasi,” we should have a broad understanding about the meanings that have been conferred on this category in diverse locations and during different time periods in the vast annals of history. The local traditions related to devadasis and the socio-cultural position accorded to them were not uniform across different locations in the subcontinent. Speaking of them as temple dancers, and thereby relating their socio-cultural presence solely to religion, betrays a narrow understanding.

The notion that the varied functions performed and contributions made in public spaces like temples and royal courts by the viraliyar of the Sangam period, women like Paravaiyar of the Bhakti period and the taliccheri courtesans of the Chola period all merged into the identity of devadasi-courtesans of the later Naicker period has gained currency in recent historical and anthropological studies. In addition, the discourses of civilisation advanced in the course of colonial modernity, perceptions on sexual mores, and debates on social reforms have all contributed to and influenced the formation of the devadasi identity as we understand it today. While speaking of devadasis, it would be pertinent to bear all this in mind.

What good is a passing remark?

The poet Vairamuthu has every right to present the views on Andal that he has shared. The violent threats against him issued by Bharatiya Janata Party supporters are to be strongly condemned. I want to say this loudly and clearly before proceeding further.

In his essay, Vairamuthu has declared that Andal could be a devadasi, citing the work of an academic scholar. Debates over the national identity of the researcher – whether he is American or Indian – are not important to me. Not only is Vairamuthu’s citation incorrect, but it is also unbecoming of a learned person to declare the identity of a great poet in a few lines, almost in passing. In her verse, Andal introduces herself as Kothai of Pattarpiran (meaning daughter of Periyazhvar). Can a lyricist or academic scholar advance a different assumption on Andal’s provenance, without taking cognisance of this self-introductory remark embedded in the text? If he can, what validity could such an assumption have in any discourse on Andal, spiritual or otherwise?

Moreover, the women identified as devadasis have been without equal in fostering the arts, including music, dance and painting, thereby preserving the cultural realm of the Tamil country. Given such pre-eminence, if Andal saw herself as part of the devadasi tradition, it would only add to her glory. But it is problematic when others presume and bestow such an identity on her.

Vairamuthu has stated: “Since we know nothing about her birth, since a caste-bound society might have hesitated to accept a woman of unknown provenance as a kulamagal (meaning a woman of “proper” clan/lineage) even though she had been brought up by a Brahmin, since she had passionately actualized in her verse the sexual liberation denied to her by society, and since the dedication of a woman to a temple had been sanctioned by society and state, some researches are bound to arrive at such a culturally shocking conclusion.”

Note the emphasis given to Andal being brought up by a Brahmin. This emphasis betrays his being hostage to the social structure, including caste. Next, kulamagal – the term used by Vairamathu – has an inherent cultural meaning and value. Right from Cilappatikaram and Veriverkai to the present, anyone familiar with Tamil culture would know the kind of woman who is usually posited against the idea of kulamagal. Not only overt expressions but also pointed silences are meaningfully embedded within the literary and cultural histories. Therefore, in my view, Vairamuthu’s assumption is male-centric and needs to be critiqued.

There must be no scope for ambiguity

If Andal had in fact been a Devadasi, would I not respect her? Most certainly, I would. But in a male centric society such as ours, a woman calling herself a Devadasi or, in a different sense, a sex worker is completely different from a man identifying her in a manner that conflates both senses. It is not proper for a man – who lives in and valorizes a male-centric society, while also enjoying the privileges and hegemonic power derived from it – to identify a woman, even one who is not a poet or goddess, in this ambiguous manner.

There is also another related gender-discriminatory notion in Vairamuthu’s discourse that needs to be firmly refuted: the location of Andal’s identity as other than kulamagal because she speaks of sexual liberation through her verse. Its overt meaning is that a woman who writes on sex cannot be a kulamagal. This is an orthodox discourse that seeks to derive a woman’s clan identity from the text. It is one thing for a woman to articulate her sexuality and sexual liberation in a celebratory mode; for a man to assume the provenance of a woman in this way from her writing is something else. What Vairamuthu has done based on a socially regressive mindset is the latter. Such a presumption would only remain as aimless gossip and empty rapture, and would contribute nothing towards the liberation of women in the sexual realm.

Only the woman can decide

A long time ago, a male friend asked me: women should consider sexual violence they are subject to as something akin to a broken nose, but why don’t they see it that way? I told him that it is up to the woman to decide how to see it, and it is wrong to suggest, from a male subject position, that she should take it lightly.

The discourse on women’s identity as discussed above is no different. A gender category that has been subject to much cultural intervention like devadasi should be broached with circumspection and responsibility. After having spoken of such a category in a few sentences in a careless and ambiguous manner, it is patently unfair to declare that the devadasi identity is a matter of pride. When a man makes a statement on gender-related issues in this manner without due circumspection and responsibility, it entails the risk of reinforcing existing gender-discriminatory perceptions and practices.

I am writing this short essay because Andal is a woman poet. Even though I don’t like to be known as a woman poet, there are certain moments where I experience the solidarity of sisterhood with other female poets.

I am also recording my dismay that Vairamuthu has needlessly given an opportunity to the BJP and its supporters, who have been waiting for a pretext to further their agenda of bigotry and violence.

(Perundevi is a poet. She has published six poetry collections and numerous essays)

Translated by N. Kalyan Raman and Kavitha Muralidharan from the Tamil original, as published in minnambalam.com