Given the UP chief minister's regressive views on women, his views on triple talaq are guided more by anti-Muslim sentiment than concern for women's rights, say activists and opposition parties. 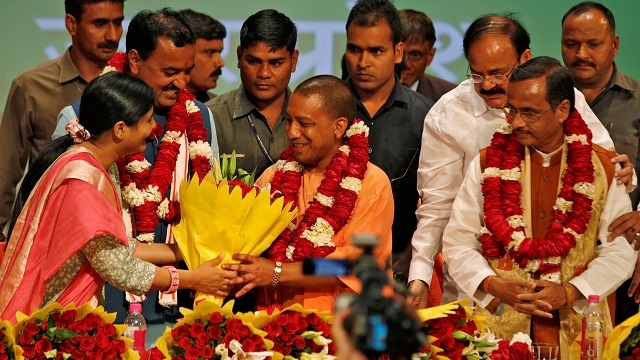 New Delhi: With Uttar Pradesh chief minister Adityanath joining the BJP’s strident campaign against triple talaq in the name of women’s rights, a 2014 essay by him on the role of women in Indian culture has come back to haunt him.

On April 17, Adityanath attacked the opposition for keeping mum on the triple talaq issue and said they were also responsible for the injustice meted out to Muslim women.

“Everyone stood silent when Draupadi was being disrobed. Those who stayed silent were as guilty and at fault as those who disrobed her. Similarly, the people who are silent on the issue of triple talaq are equally guilty,” he said.

Fine words in defence of womanhood, one might think, except that they stood in marked contrast to the misogynist prescriptions that an article he wrote is littered with.

Reading out portions of the essay that Adityanath published on his eponymous website in 2014  – ‘Matrushakti Bharatiya Sanskriti Ke Sandharbh Mein (Power of the Mother Figure in the Context of Indian Culture)’ – at a press conference in Delhi, Congress spokesperson Randeep S. Surjewala came down heavily on the UP chief minister for what he said were “disparaging, dishonourable and distasteful” remarks against women.

The Congress singled out a few arguments that Adityanath made in the essay in trying to expose the BJP’s double standards on the question of women’s rights.

Adityanath made a case in the essay that women required protection and should not be allowed independence, as “it may lead to wastefulness or destruction of women”.

“Shastras have talked about giving protection to women. Just like urja (energy) left free and unchecked causes destruction, women also don’t need independence, they need protection. Their energy should be channelised to be used productively,” Adityanath said in the article.

Further, he added, “Stree shakti (women’s power) is protected by the father when a child, by the husband when an adult and by the son in old age.”

He attributed certain qualities to both sexes that were exclusive to them and could not be exchanged. “If a man was to ever get the same attributes as women – that of humility, love and compassion – then he is equivalent to god. But if a woman adopts the qualities of men – that of bravery (shaurya) or masculinity (purusharth) – then she becomes a devil (rakshasa).”

Surjewala went on to allege that Adityanath’s statements showed the BJP’s true views on gender justice. “Yogi does not take into account the countless women who have sacrificed their lives for India. Has the BJP forgotten about the valour of Rani Laxmibai, Razia Sultan, freedom fighter Laxmi Sehgal and goddesses like Durga, Kali and many others? What Yogi has said reflects the BJP mindset. It does not think women have the right to decide for themselves or right to fair treatment,” he told the media.

Responding to the allegation that the opposition has been silent on triple talaq, he said that it was completely untrue. He said that the issue needs to be sorted out after talking to various stakeholders, building confidence and pushing them to accept progressive ideals in their religious practices.

He added that his colleague and Congress national spokesperson Manish Tiwari is representing the women’s groups who are fighting the practice in court.

“The BJP is using the issue as a tactic not only to target Muslims but to divide Indian society on religious lines. That is why we have questioned their intent and larger vision about women’s role in society as is reflected in Adityanath ji’s essay,” he said.

“As far as the issue of triple talaq is concerned, we completely concur that women of India irrespective of caste, creed, colour, religion or region demand our respect, equality and fair treatment. They deserve all of it, not as a matter of benefit being conferred upon them but as equal citizens of India,” he added.

The Congress demanded that if the BJP and Adityanath are serious about addressing the concerns of women, Adityanath should first apologise and take the article off his website. Surjewala also said that Prime Minister Narendra Modi and BJP president Amit Shah should immediately issue an advisory note to the UP chief minister to refrain from such “insulting remarks against women” in the future.

The BJP in the last few months has been specifically criticising the practice of triple talaq, while leaving aside various other concerns that relate to women’s rights as a whole. The matter shot to the limelight last week when Modi, in the BJP’s national executive meet at Bhubaneswar, urged party activists to reach out to backward sections of the Muslim community and make efforts to provide justice to Muslim women affected by the practice. Many other leaders, including Adityanath, followed suit and criticised the issue.

In response, the clergy-driven All India Muslim Personal Law Board, which has been on the back foot over the issue, said that the practice is “wrong” but is still a valid way to end a marriage. It, however, added that those who “misuse” the law would face “social boycott” from the community.

The BJP has managed to exploit the issue to its political advantage over the last few months. While it advocated justice for Muslim women instead of offering a holistic vision on women’s rights, leaders in the opposition have pointed out its historical opposition to women’s freedom and constitutional rights.

Surjewala pointed out a few instances of what he saw as the Hindu right’s double standards.

Amidst this political battle, most women’s rights activists believe that while the saffron party is deliberately being selective about which issues to pick up, the opposition too has refrained from taking a clear stand.

Zakia Soman, a founding member of the Bharatiya Muslim Mahila Andolan,told The Wire, “Even after 70 years of independence, if triple talaq is still being practiced, then we have to accept that it is a collective failure of our political class. I will give full credit to the struggles and campaigns of Muslim women which foregrounded the issue and forced the political class to debate the issue.”

She added that the affidavit that the Union government has filed at the Supreme Court in support of the demand to abolish the practice is in keeping with all constitutional obligations. “It is the constitutional duty of any government to uphold gender justice. Both the BJP and Congress are opposing each other without taking principled stands. The central concern is that of the Muslim woman. If the opposition is quite rightfully opposing ban on beef or condemning several murders in the name of gau raksha, then what prevents it from criticising triple talaq. Our political class need not behave like prisoners of the clergy. We are opposing what has happened in Alwar (Pehlu Khan’s murder) or Dadri (Mohammed Akhlaq’s murder) in the name of cow protection but we welcome the government’s effort towards abolishing triple talaq.”

Jagmati Sangwan, a long-time crusader against khap panchayats in Haryana, said that the central idea that Adityanath raised in his essay is that women need “protection” instead of “freedom” and it is an idea which is not isolated from the larger vision that the BJP propagates.

“A woman under the protection of man will not claim her property rights and her to right to independently choose her relationships. To prevent the patriarchal set up from disintegrating, votaries of patriarchy need to control women, protect them as as subordinates. This is Adityanath’s fundamental vision. If women are free, they will choose their relationships, they will claim their property rights. The hegemonic section of our society who are controlling the socio-economic order and have control over resources will lose its power if women are free,” Sangwan told The Wire.

“Women’s freedom,” she said, “opens up a way towards an egalitarian society and they fear that.”

She said that patriarchy and manuvaad (the caste system prescribed in the Hindu text Manusmriti) are the crux of BJP’s politics. She added that if the BJP had been that serious about injustices against women, they would have taken up the issue of ‘honour’ killings long before.

“Some of us, as a delegation, went to meet the BJP’s Union law minister and demanded a law against ‘honour’ killings. To this, he said he fears its possible misuse, like in the cases of 498A (dowry prevention law) and the SC and ST (Prevention of Atrocities) Act. Similarly, we have been raising the issue of 33% women’s reservation in parliament for the last 26 years. The Congress left it in a lurch and now the BJP has not shown any intention to pass the law. It does not like to even discuss the matter. All of us know that the Hindu right has always been opposed to Hindu women’s property rights. Its leaders had fiercely opposed Babasaheb Ambedkar when he brought the Hindu Code Bill and Hindu Succession Act in the 1950s. Currently, their opposition to triple talaq is yet another way to target the Muslim community, not women’s equality. Why don’t they implement women’s reservation, which they had promised in their manifesto,” Sangwan asked.

“Yogi Adityanath is an ardent believer of Manusmriti’s inscriptions, a fact that he has himself admitted. It never allows women a position of equality and respect,” she told The Wire.

She attributed a “hidden agenda” to the BJP for singling out the issue of triple talaq. “Even the prime minister is talking about it. This is nothing but using it for political gains. If they are really concerned about injustices meted out to women, they should take it up in a holistic way. Why are they singling out one issue? Do they mean to say that interests of women from other religions have already been safeguarded? It is sad that the government is trying to gain out of the pathetic conditions of women. Women have been discriminated in all the religious personal laws. Why can they not talk about women’s issues, irrespective of their caste and religious loyalties,” she asked.