Gandhi Would Have Resisted Today's Forceful Imposition of Vegetarianism

The recent proposal by the Railway Board to serve only vegetarian food on Gandhi Jayanti is not in line with the Mahatma's principles. 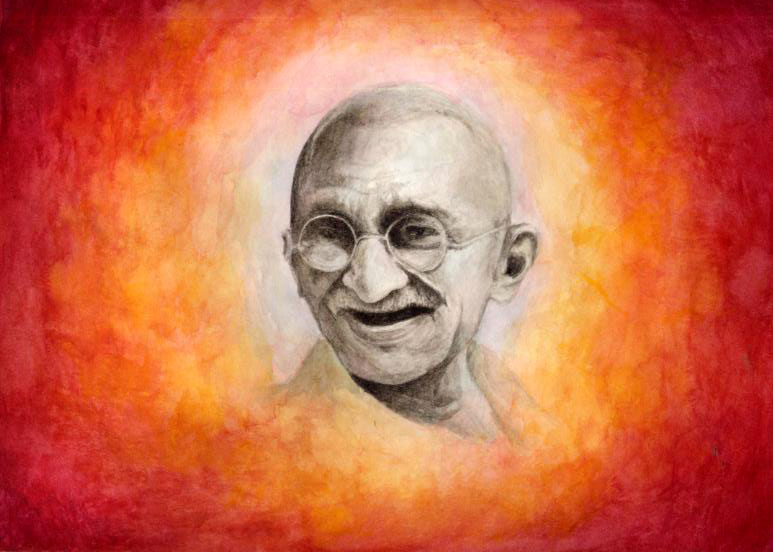 This article was originally published on May 23, 2018. It is being republished on the occasion of Gandhi’s 150th birth anniversary.

With its ascendancy to political power, the Hindu Right has amplified its long-term project of inserting itself into the narrative and legacy of our freedom struggle. One key element of this strategy is the distortion of historical facts. Another consistent tactic is to claim a strong affinity with Gandhi’s values and ideals. Indeed, a recent proposal by the Railway Board to serve only vegetarian food on Gandhi Jayanti for the next three years is in line with this strategy.

Throughout history, rules on diet and commensality have been key sociological markers of differentiation in Indian society. For the Sangh and its ilk, a forceful declaration of their vegetarian credentials is a means of distinguishing themselves from others, especially Dalits, Muslims and Christians. If the perpetual controversies over beef are the overt assertion of political power, public espousal of vegetarianism is the obverse side of the same coin. Indeed, in such a scenario, vegetarianism serves as a form of dog whistle politics for discrimination against many communities that the Hindu Right despises.

For sure, throughout his lifetime Gandhi was a vegetarian and had strong views on food and diet. But, while Gandhi advocated vegetarianism, the basis of his advocacy underwent an evolution. As he admitted in his autobiography, as a young man in England, Gandhi stuck to a vegetarian diet to honour a vow he had made to his mother:

I had all along abstained from meat in the interests of truth and of the vow I had taken, but had wished at the same time that every Indian should be a meat-eater, and had looked forward to being one myself freely and openly some day, and to enlisting others in the cause.

It was later that Gandhi’s vegetarianism evolved from simple adherence to the practices of his family and community to one with an ethical basis and compassion for other living beings.

The seemingly muddle-headed bureaucratic move of the Railway Board is admittedly smart if not a diabolical strategy. It draws on the fact of Gandhi’s vegetarianism and yokes it to a militant assertion of vegetarianism that is repugnant to the values and principles of the Mahatma. For while Gandhi was a vegetarian, he always found the forcible imposition of any norm or value on others an abhorrent idea that ought to be resisted. Here one is reminded of an episode during Gandhi’s time in Noakhali in 1946 that is recounted by the Bengali scholar Nirmal Bose in his memoir My Days with Gandhi. A Christmas gift bag that was sent to Gandhi included a pack of cigarettes. Since Jawaharlal Nehru was to arrive a couple of days later, Gandhi asked for the cigarettes to be reserved for Nehru.

Given the endless rounds of controversy over beef, a more relevant story comes from Jehangir Patel. In May 1944, an ill Gandhi was released from the Aga Khan’s palace and was convalescing at Patel’s Juhu home. One morning, Gandhi’s disciple Mirabehn declaimed that “Bapu won’t be able to eat his breakfast”. Mira had found raw meat placed next to fruit in the fridge. The cook had placed the meat meant for Patel’s dog in the fridge and an upset Mira argued that Patel was being a terrible host to the Mahatma. Upon hearing the fracas, Gandhi took a few grapes from the fridge and ate them. He then chastised Mira for being unreasonable and pointed out that “We are guests in our friend’s house, and it would not be right for us to impose our ideas upon him or upon anyone. People whose custom it is to eat meat should not stop doing so simply because I am present.”

While the two stories related above should suffice to argue against the problematic moves by the Railway Board, we should not let the terms of our engagement with Gandhi’s ideas on food be limited to arguments about beef and vegetarianism alone. Throughout his eventful life, Gandhi had much to say about the role of food in our lives. For sure, these views included an ethical advocacy of vegetarianism and human responsibility in the ethical treatment of all forms of life. But Gandhi’s ideas on food went beyond the terms of such debates to encompass fundamental questions of nutrition, economic justice and an ecological way of living.

In 1934, Gandhi was convinced that the fundamental needs of rural India could not wait any more and needed immediate redressal. He resigned from the Congress and moved to Wardha, eventually settling down in a nearby village that was named Sevagram. Gandhi’s endless experimentation in this period was with the health benefits of a variety of foods. The serving of a chutney of bitter neem leaves and unpalatable dishes made out of soya beans during the course of Gandhi’s experiments has evoked much humour. But the underlying intent was a serious one.

Throughout the 1930s, Gandhi paid enormous attention to the vital question of providing a healthy and nutritious diet for all Indians – including the millions of poor people with limited means. Towards this objective, Gandhi sought to equip the ordinary Indian of his time with the ability to make best use of locally available natural resources coupled with a systematic and scientific understanding of nutrition in the Indian context.

The problem of nutrition was addressed in multiple ways. Gandhian constructive workers under the leadership of J.C. Kumarappa carried out extensive experimentation and analysis to build a systematic body of scientific knowledge that was published as monographs on a variety of foodstuff such as jaggery, rice, oilseeds etc. Written in a simple manner, these monographs were designed to aid the education of Indians on questions of food and nutrition. They also published what is perhaps the first Table of Indian Food Values and Vitamins. The Gandhians also produced a popular volume on dietetics titled What Shall We Eat? In the context of the shrillness of contemporary debates, it is important to note that this Gandhian publication – that included a foreword from the Mahatma – carried a detailed nutrition table of food items including human milk, eggs, fish, sheep liver, mutton, pork, and yes, beef.

Seven decades after our independence, large number of Indians remain hungry and malnourished. If the government truly wishes to honour the Mahatma’s memory, it could make a simple beginning. It could forget about divisive and diversionary steps such as vegetarian meals on Gandhi Jayanti and the denial of nutritious eggs to millions of poor and underfed children through the mid-day meal scheme. Subsequently, it could devote its attention to the fundamental problem of providing a fair compensation for the labours of the Indian farmer while ensuring a healthy diet for all.