An RTI query shows that the mid-day meal allowance for Tripura primary school students is less than Rs 5 a day. New Delhi: The BJP government in Tripura, led by Biplab Kumar Deb, has not provided food to any child under the mid-day meal (MDM) scheme while the schools remained closed during the lockdown, according to documents accessed by The Wire under the Right to Information.

Given that a lack of proper nutrition weakens the immune systems, the Union Ministry of Human Resource Development (MHRD) had asked state governments and the administrators of Union Territories to ensure that children get their meals even though schools were closed due to the COVID-19 threat.

However, in Tripura, the state government did not provide meals to the children, but instead credited the accounts of students or their relatives with a lump sum that is less than the amount prescribed as the cost of cooking under the MDM scheme.

In a letter dated April 6, 2020, the director of the Tripura elementary education department, Saju Vaheed A, asked the inspector of schools to transfer the cost for food grain and cost of cooking as prescribed under the MDM scheme at the directorate level into the accounts of all students or their parents.

Also read: Amidst Lockdown, 1 Out of Every 5 Kids in Uttarakhand Didn’t Get Food Grains Under Mid-Day Meal

However, the amount allocated per student by the state government is much less than even the cooking cost.

According to the letter, the Tripura government asked the inspector of schools to credit Rs 150 at the rate of Rs 5 per day to the accounts of primary school students (Class 1 to V) and Rs 210 at Rs 7 per day to the students at the upper primary level (Class VI-VIII) for a period of 30 days between March 17 and April 17, 2020. 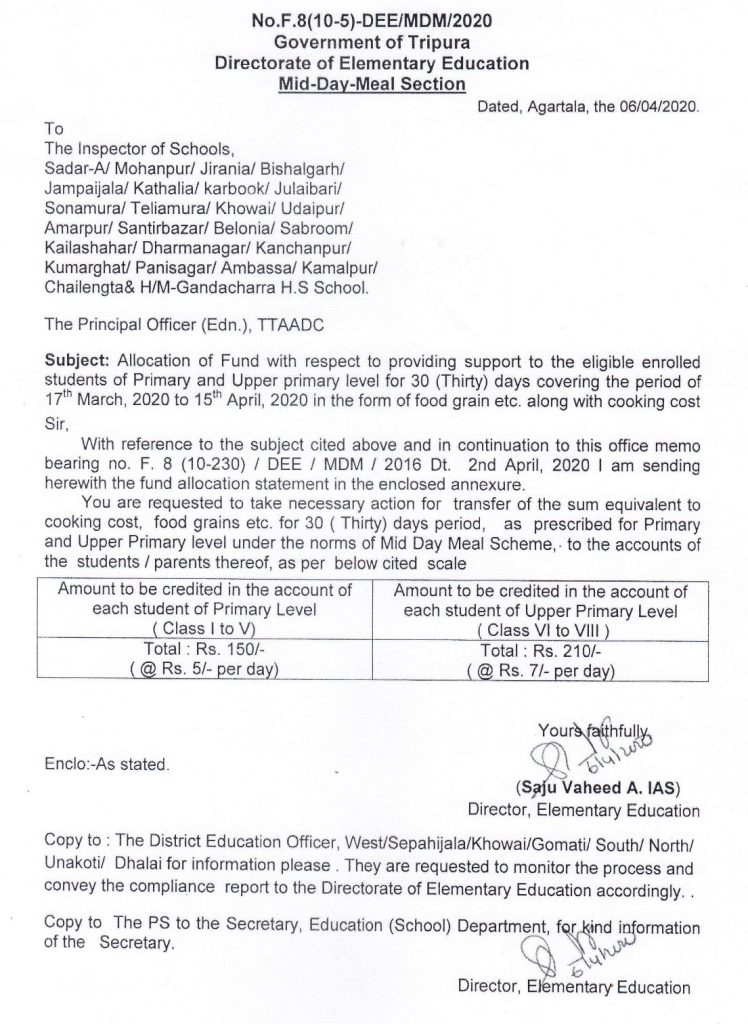 This amount includes both the cost of food grain and the cost of cooking. The director of the elementary education department wrote, “You are requested to take necessary action for transfer of the sum equivalent to cooking cost, food grains, etc. for 30 (thirty) days period, as prescribed for Primary and Upper Primary level under the norms of Mid-Day Meal scheme, to the accounts of the students/ parents thereof.”

However, new norms came into effect on April 1 and since then, only the cooking cost per child per school day has been transferred to the students’ accounts. This works out to Rs 4.97 and Rs 7.45 per day at primary and upper primary levels respectively, which includes the procurement of pulses, vegetables, oil, spices and fuel.

It is therefore clear that the Tripura government failed to provide not only food grains to the children, but even the full cost of cooking. The state government called this a ‘food security allowance,’ even though according to the MDM scheme, such an allowance should include both the cost of food grains and the cooking cost.

According to documents accessed by The Wire, the number of students enrolled at the primary and upper primary levels in the eight districts of Tripura is 2,66,326 and 1,65,953 respectively. In total, 432,379 students enrolled in government schools across Tripura are eligible to receive food under the MDM scheme.

In a letter dated March 20, the MHRD asked all state governments and union territories to ensure that students either get their meals or a commensurate food security allowance as schools remain closed due to the COVID-19 threat.

In the letter, R.C. Meena, joint secretary in the HRD ministry, stated that cooked food must be provided under the mid-day meal scheme to students in government and aided schools as well as government-aided special training centres, madrasas and maktabs under Samagra Shiksha scheme.

Under Section 9 of the 2015 mid-day meal scheme, if the mid-day meal is not provided in school on any school day due to non-availability of food grains, cooking aids, fuel or the absence of a cook-cum-helper or any other reason, the state government shall pay a food security allowance which includes the cost of the quantity of food grains according to the entitlement of the child and the cost of cooking prevailing in the state.

On May 22, Saju Vaheed A wrote another letter to the inspector of schools, regarding the transfer of funds to the students’ or parents’ bank accounts in lieu of food under the mid-day meal scheme for a period of 45 days between April 17 and May 31, 2020.

In this letter, the state government stuck to its earlier calculation of the amount to be credited. The director asked the inspector of schools to credit Rs 225 at the rate of Rs 5 per day and Rs 315 at Rs 7 per day to students enrolled in primary and upper primary level respectively. The amount is even less than the cost of cooking. 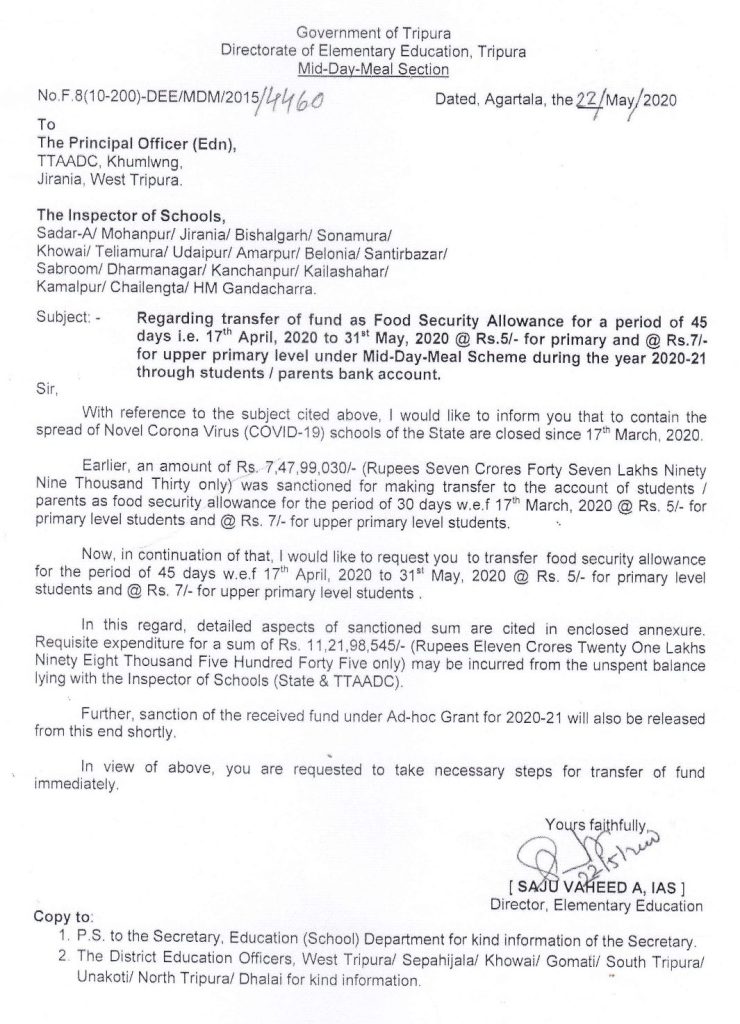 The Tripura government allocated Rs 11.21 crore for the period, which was to be acquired from the unspent balance lying with the inspector of schools.

Because Tripura is a north-eastern state, the Centre bears 90% of the cost of cooking while the state government contributes 10%. The Centre provides food grains to all states free of charge.

On April 27, the Centre had released a special assistance fund of Rs 13.85 crore to the state of Tripura under the mid-day meal scheme. This included Rs 9.81 crore as cooking cost and Rs 73.10 lakh as cost of food grains.

In a meeting with state education ministers on April 28, the HRD minister, Ramesh Pokhriyal, had said that mid-day meals or food security allowance would be provided to students even during school summer vacations in view of the pandemic so that children get adequate and nutritious food to develop immunity.

The Wire had earlier reported that the Uttarakhand government did not provide food to around 1.38 lakh children under the mid-day meal scheme during April and May. Out of 66 school days between March 13 and May 17, 2020, the state government provided rations to children only on 48 days.

On June 3, Sanjay Mishra, OSD for chief minister Biplab Kumar Deb, tweeted, “The Wire’s claim that ‘School students in Tripura were not provided mid-day meals during the lockdown’ is completely misleading and baseless. As per the MHRD guidelines, a lump sum in lieu of cooked food has been deposited in the accounts of children and parents in two phases, keeping in mind the COVID-19 infection.”

However, Mishra highlighted only one part of the information. In fact, the MHRD had issued guidelines to the states asking them to provide food security allowance (FSA) which includes both the cost of food grains as well as cooking cost.

The Wire had already mentioned in the story that the state government has credited the accounts of students or their parents with a lump sum instead of providing cooked food under the mid-day meal scheme. But the amount credited is less than the cooking cost.

As per the new norms of the Centre effective from April 1, the cooking cost per child per school day has been increased to Rs 4.97 and Rs 7.45 at primary and upper primary level respectively. It includes the cost of pulses, vegetables, oil, spices and fuel.

It is clear, therefore, that the amount offered by the state government to students in upper primary classes between April 1 and May 31 in lieu of cooked food under the Mid-Day Meal Scheme is less than the cooking cost. In addition, neither was any food grain provided to any student in the primary or upper primary levels, nor its equivalent amount transferred into their accounts.

Though the state government did credit a little more than the cooking cost, that is, nominal additional sum of Rs 0.52 and Rs 0.29, into the accounts of students or their parents between March 17 and March 31, the amount is nowhere near the cost of food grains.

The additional sum provided by the Tripura government, that is Rs 0.52 and Rs 0.29, for a period of 14 days, is not sufficient to allow purchase of food grains as their market price is much higher.

The Wire had sent an email to the director of the Elementary Education Department and the secretary of the Education Department of Tripura seeking the break-up of the amount dispensed to the children in lieu of food under the mid-day meal scheme but no response was received. The letter sent to the Inspector of Schools by the state government also does not provide the details of the criteria on which they have calculated the amount.

Responding to Sanjay Mishra’s tweet, this reporters sought information from him regarding the matter, but he has not posted a reply yet. In addition, the state government has also not clarified the number of students or their parents into whose accounts the designated amount has been transferred.

The government’s response and The Wire’s response to it were added to this article on June 5.