How Choice and Compulsion Made Delhi a Culinary Capital

The intersectionality of diverse cultures and their equally diverse culinary habits led to the the transformation of Delhi's gastronomical sensibility. 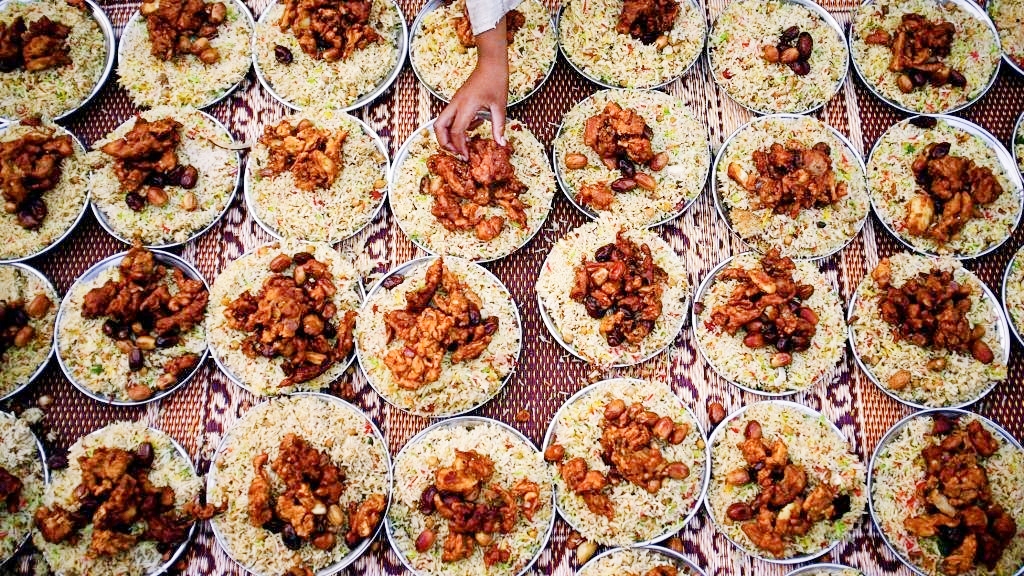 In the last piece of ‘Capital Matters’ we had talked about the linguistic diversity of Delhi and also about the almost overnight transformation – in the aftermath of Partition – of a primarily Urdu speaking city into a city overwhelmed by those who spoke Punjabi. We also spoke about other linguistic groups and of the fact that the ever changing demographics of the city have led to the triumvirate of Awadhi, Bhojpuri and Maithili emerging, in recent years, into the linguistic group with the largest number of speakers.

The city as we knew it in 1947 has also changed fundamentally. Prior to 1947, the city was Shahjahanabad, and the rest was not the city. Now the city has expanded to include vast areas, but this is not the time to talk about these matters, today we will talk about changes in culinary habits.

The exchange of population triggered by the Partition transformed everything about Delhi. The most visible was, of course, the linguistic landscape of Delhi but there was little else that remained as it was and among the most remarkable change was the change in the manner in which food was consumed and the new range of food stuffs that became available.

Ask any old Dilliwallah and you will be told that in the good old days, no one went out to eat. There were hawkers who carried readymade delicacies on their heads placed in large circular trays and they went hawking from street to street. If you fancied their ware, you gave a yell, the hawker came to your doorstep and you bought what you wanted, took it home and ate. You did not go to go sit in a eating joint and eat – if you liked what they had on offer, you carried a vessel from home, bought what you wanted and took it home to eat.

The famous Ghante-Waala Halwai, which shut shop after lasting for almost two and a quarter centuries, initially started as a hawker of sweets. He carried a small bell that he would ring to announce his arrival and it was this bell that eventually became his trademark.

The only exception were the shop keepers who spent their entire day in the markets, but they too bought what they wanted from the hawker and ate it sitting inside their shops. Rare was a Dilliwallah who would be seen eating in the street.

Now if the Dilliwallahs did not patronise these establishments, how did they survive for all these generations?

One must remember that Shahjahanabad was not a mere centre of power, a mere capital like New Delhi or Gandhinagar. It was a city, a major centre of trade and craft and a major centre of pilgrimage to temples like Kalkaji and Yog Maya and numerous Sufi shrines.

Merchants and traders flocked to the city in very large numbers from all over. François Bernier (1620-1688) who spent many years in Shahjahanabad has left detailed accounts about the markets, the merchants and merchandise of the city. Merchants, traders, travellers arrived in such large numbers that when Shahjahan’s daughter Jahanara, was commissioning the main commercial hub of the city, now known as Chandni Chowk, she provided for a Caravansarai right in the heart of the city. The Caravansarai known as Begum ki Sarai stood where the town hall building stands now.

To these casual visitors, whose number had for quite some time been sufficient to sustain these eating establishments, were gradually added a large number of visitors: surveyors, engineers, town planners and others who began flocking to Delhi, first in 1864 with the introduction of regular railway services linking Delhi to Howrah and Kalka, the colonial winter and summer capitals of Calcutta and Simla and later from 1912 with the shifting of the Capital to Delhi and the construction of New Delhi.

Many of those who came to Delhi in connection with work for the new capital had to stay in Shahjahanabad because the sites of the new city were nothing more than wildernesses. And these visitors continued to swell the ranks of those who were looking for eating places that served vegetarian food and also those that had a more eclectic, a more inclusive menu. 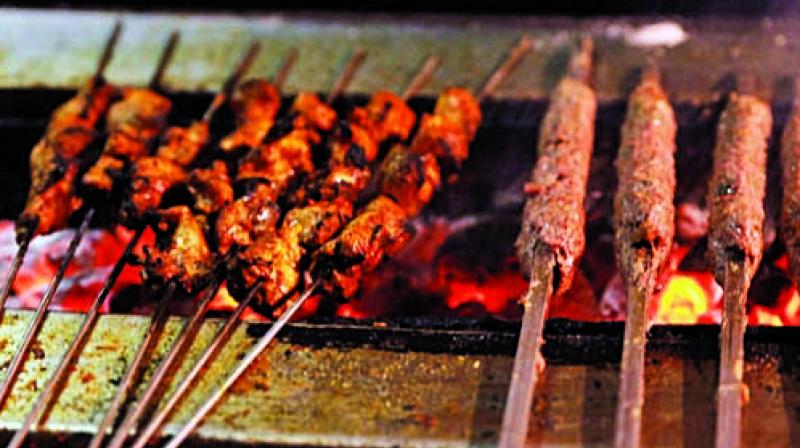 A display of skewered kebabs is a common sight in the Old City. Credit: PTI

So, as far as consuming food was concerned there were two worlds in Delhi, those who lived in the city and ate at home, occasionally picking up some ready-made stuff from the markets and enjoying it in the confines of their home, or inside their shops or workplaces and then there were the travellers, merchants, traders, pilgrims and others who came to Delhi for a short duration and then returned. The second set was those who patronised the large number of eating joints that one could fine all over the city, in every market.

This of course is only about those who could afford two square meals a day, there was another large floating population that lived in the city but had no homes, the beggars, the homeless and the destitute. They relied on the good will of both the resident and the visitor to feed them and clothe them, but these are people who are never mentioned when we make broad sweeping generalisations about a city or about a culture, they are never talked about because no matter how numerous they might be, they do not contribute to production of wealth and so they remain unaccounted for.

This broad division between the two kinds of food consumers, the introvert and the exhibitionist if one may be permitted to use the terms, had begun to slowly unravel with the advancement of modernity, now people were going to work in offices and factories, they were going to teach and to learn, they went to colleges and schools and they were gone for the better part of the day. Most work places had canteens and the practices of eating out, stopping for a cup of tea while going back home gradually began to take hold. This was not happening in Delhi alone this had started in Bombay and Calcutta and Madras even earlier.

This eating in the privacy of your home or in your shop has over the last seven decades gradually admitted, though grudgingly, to the existence of a parallel reality, the reality of eating in the streets. The Dilliwallahs initially commented on this collapse of civic etiquette, a few years later they confined themselves to saying we have never done it and finally gave in and accepted the new normal.

There were two reasons for this drastic change in eating habits. The first was occasioned by compulsion and the second was the result of deliberate choice. 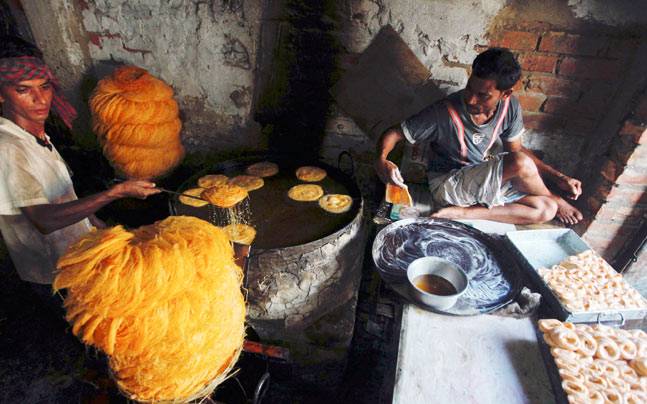 With 1947, hundreds of thousands poured into Delhi from what was then known as Pakistan, just as they poured into Bengal from what was then East Pakistan. Among them was a very large number of the homeless, thousands of families who had no place to go anywhere and who had had no plans of leaving their homes, they had not in their wildest dreams imagined that they will be alienated from their home and hearth and had never made plans to move and so they had no papers showing they owned immovable property. Many had never owned any property, they were landless peasants, share croppers and now suddenly they were on the streets of Delhi.

It is these people who began living where ever they could find an excuse of a shelter. From Kashmiri Gate down Nicholson Road, from Delhi Gate to Ajmeri Gate and from Ajmeri Gate to Kashmiri Gate there were stretches where parts of the city wall had remained and the arched niches in the wall became homes for entire families.  They huddled beneath bridges and moved inside roofless ruins in their effort to find some modicum of privacy.

These were many among these who had no property to call their own in what was now Pakistan and there were others who did not have the luxury to acquire such papers and would have to wait for years to get them from across the newly created borders. The government was duty bound to provide housing to those who could show evidence that they had owned property across the border. Those that could not produce these chits of paper, and their numbers were huge, crammed every available shelter. The daily routine of their existence on public display. It did not matter who was watching, because those who could watch were themselves in the same circumstances.

So Delhi had this set that ate in the streets because they had n0where else to go and then there were those who popularised the practice of eating out – surprisingly they too came from what is now Pakistan, but these were not the ones who had no papers most of these people had all the papers that were needed and sooner or later they had places that they could call home, they had a roof over their heads, the living quarters were a little cramped, may be they had to share bathrooms  but they were not on the streets and there were many others who were even better off.

Many among them came from families where cooking of meats was not permitted at home, but the young men of the family loved the stuff an so they went out in search of such joints and very soon many of the preparations that they had left behind in Lahore, Rawalpindi, Peshawar and elsewhere made an appearance on the streets of Delhi , especially where the well-to-do migrants were settled and thus began the journey not only of tandoori chicken but a whole lot of other things that were to transform the culinary sensibility of the city that Shahjahan had built.