Vaali, an Astute Lyricist Who Excelled in Adversity

From the late 1950s, Vaali had a storied career in Tamil cinema and politics, both of which he helped shape through his lyrics. 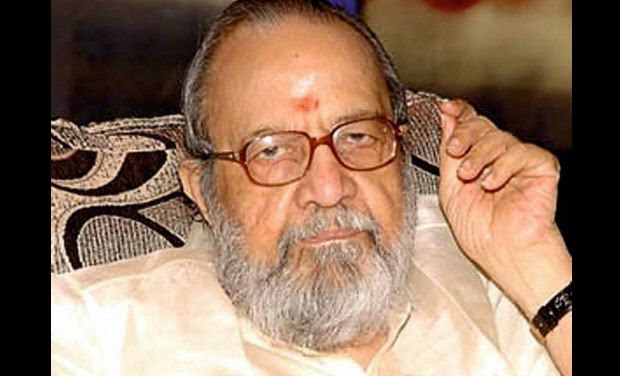 There is never a bad time to remember the renowned Tamil lyricist Vaali, who passed away four years ago this month. He wrote the songs that made M.G. Ramachandran a darling of the masses, that give Sivaji Ganesan some of his political ambitions; in all, he wrote over 15,000 poems that have been memorialised in the annals of Tamil Nadu’s filmographic and political history.

He was born T.S. Rangarajan in 1931 in Srirangam, Tamil Nadu, and had carved out a niche for himself in the state’s film industry during the acting heydays of M.G. Ramachandran (MGR) and Sivaji Ganesan. When he first came to Madras from Srirangam seeking employment in the 1950s, he had found that it wasn’t going to be easy for him to make it, especially since the Tamil film industry in those days had been notorious for its unpredictability, leg-pulling and cut-throat competition. He also had to find a way to cut ahead of stalwarts like Udumalai Narayana Kavi, Pattu Kottai Kalyana Sundaram and, of course, Kannadasan – a predicament exacerbated by the fact that a few producers and directors, like K.S. Gopalakrishnan, were also trying to double up as lyricists.

In a stroke of luck, the actor and comedian Nagesh, who was also just staking it out in the industry, introduced him to director K. Balachander. A chance to write for the silver screen materialised in 1958, for the film Azhagar Malai Kallan. A bigger break followed in three years, for MGR’s 50th film Nallavan Vazhvaan (The Good Man Will Live). However, these years continued to be tough on Vaali because he still wasn’t making enough to get by. While these days it is not unusual to learn that those involved in moviemaking earn many lakhs, or even a few crores, per project, the highest paid sum when Vaali started out had been around Rs 2 lakh, and that too only to MGR and Sivaji.

His fortunes took a turn for the better when a rift emerged between MGR and Kannadasan over their political opinions. And because of the heft that MGR commanded in the industry, he refused to work with Kannadasan and wanted to have him replaced with another ‘preferred’ lyricist. Enter Vaali, who did not have to look back from then. After Nallavan Vazhvaan, Vaali reeled out hit after hit in MGR films from the early 1960s to the late 1970s, a period that also coincided with MGR’s even higher rise to stardom and, after that, into political success. One of these songs also went on to become emblematic of MGR’s social reforms in Tamil Nadu: ‘Naan aanaiyittaal‘ (‘If I promised’) from Enga Veettu Pillai (The Son of Our House; 1965).

If writing politically charged lyrics often brought immediate success, it also sometimes cost Vaali his peace of mind. For example, he recalled the torrid time he faced in 1968 when he was working on Sivaji’s 125th film Uyarndha Manithan (The Noble Man) at almost the same time he was working on MGR’s 100th film Adimai Penn (Enslaved Woman). He wasn’t only expected to satisfy the lyrical needs of the two actors – he also had to split his work between films produced by the two major, and rival, production houses of the time: AVM Studios and Gemini Studios.

In all, he wrote songs for 63 of MGR’s films and, over time, 70 of Sivaji’s as well. The song ‘Indhiya naadu en veedu’ (‘India is my home’), from the Sivaji-starrer Bharatha Vilas (1973), won him a national award. He won state-level accolades for Engal Thangam (Our Gold; 1970), Ivargal Vidhyasamanavargal (They Are Different; 1980), Varusham Padhinaaru (Year Sixteen; 1989), Apoorva Sahodharigal (The Wonderful Sisters; 1983), Keladi Kanmani (Listen, My Dear; 1990) and Dasavatharam (Ten Incarnations; 2008).

However, silver-screen success hasn’t ever been the sole determinant of overall wellbeing in the Tamil film industry. It also required, and still requires, personalities to engage with Tamil Nadu’s politics. Some may choose to immerse themselves in it or while others may stay away altogether – but neither course of action is possible without first acknowledging the hand of politics in their lives. Vaali was no exception.

Also read: The mystique of MGR – a legend who lives on

In 1970, the state government, led by Chief Minister M. Karunanidhi, had been calling for a ban on the film Mohammed Bin Thuglak, directed by the writer and political commentator Cho Ramaswamy. The film was based on a 1968 theatre production of the same name and was a satirical take on the state politics of the time. Karunanidhi did not appreciate it, more so since both the Lok Sabha and state assembly elections were due to be held in 1971. Vaali, who wrote the three songs in the film, said that he had to plead with Cho to wrap up quickly and release it because MGR, who was then still allied with Karunanidhi, was applying mounting pressure on Vaali to leave the project.

A larger tangle followed in the 1980s. When MGR split from Karunanidhi’s Dravida Munnetra Kazhagam (DMK) party in 1972 to float the Anna DMK, he offered Vaali a position in his party, but Vaali refused. After MGR passed away in 1987, R.M. Veerappan, one of the party’s senior leaders and also a film producer, put his weight behind Janaki, MGR’s wife, as the late actor’s political successor. This choice did not go down well with another actor and party member who was vying for the leadership: J. Jayalalithaa. And when Vaali came out in defence of Veerappan, he also fell into the bad books of Jayalalithaa and her admirers. She had already been suspecting that the lyricist was close to her bête noire, Karunanidhi. And when she won the state elections in 1991, Vaali began to fall out of favour among the film industry’s prime movers.

But in spite of his taking sides in the political sphere, Vaali had a reputation of being a fierce loyalist. For example, MGR construed the Balachander film Thanneer… Thanneer… (Water… Water…), which released to widespread critical acclaim in 1981, to be a mockery of his government’s failure to resolve the acute water shortage crisis in rural Tamil Nadu at the time. Unsure of how to respond, he had asked Vaali if Balachander wrote his films’ scripts by himself or had someone else ghost-write them for him. The lyricist was furious, and accused MGR of having been grossly unfair in his judgment.

Over his lifetime, Vaali had been contemptuous of the media, especially when it tried to pry into his marital affairs, and had also criticised the declining quality of song lyrics since the days of Kalyana Sundaram and Kannadasan. Apart from songs, Vaali also wrote film scripts, screenplays and dialogues, as in Kadavul Amaiththa Maedai (A Platform Established by God; 1979) and Orey Oru Graamathile (In A Village; 1987), which was particularly controversial for its depiction of casteism. He also starred in television serials like Kaialavu Manasu (The Heart Is As Long As the Hand), Vikramadhithan, Thangamaana Purushan (Precious Husband) and Amutha Oru Aacharyakuri (Amutha Is An Exclamation).

K.V. Venugopal is a freelance journalist in Chennai.