'Tripoli Cancelled': In Between Time, Temporality and the Temporary

Greek film Tripoli Cancelled, inspired by the experiences of the director’s father trapped without a passport at Athens Ellinikon airport in 1977, explores the blurred lines between freedom and confinement in times of desperate migration. 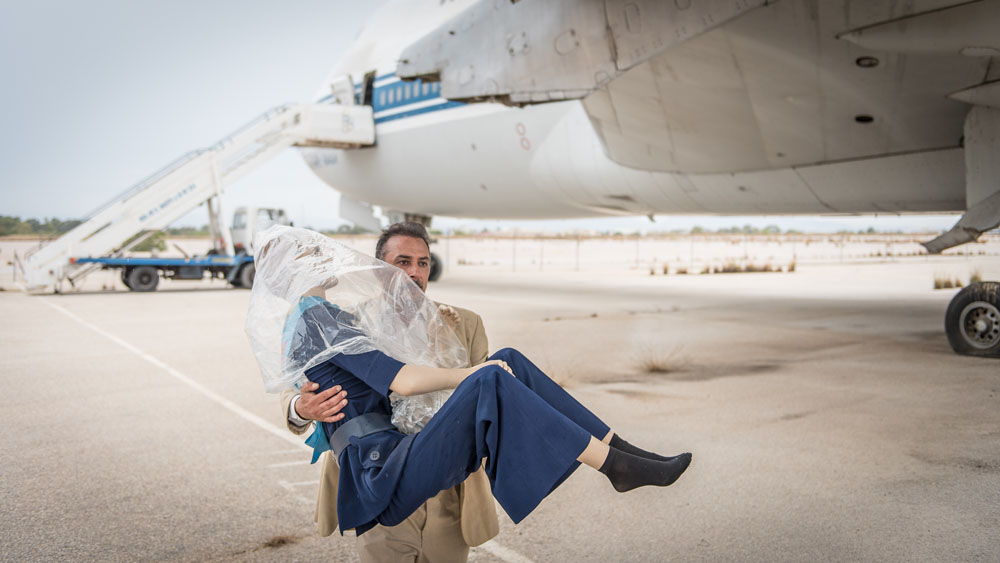 In Naeem Mohaiemen’s film Tripoli Cancelled (2017), the unnamed protagonist lights a cigarette whilst being seated on a broken escalator. Intonated by a sharp sadness, he breaks into singing ‘Never on Sunday’ (the Chordettes classic). The song from a film of the same name, makes a curious reference to the free spirited character of Ilya, a prostitute by profession who lived in the port of Piraeus in Greece. The film also revolves around Homer, an American tourist from Middletown, Connecticut, who is a classical scholar enamoured by all things Greek. Homer believes that Ilya’s corrupt way of life illustrates the degradation of Greek classical culture. He takes it upon himself to try and manoeuvre her onto the path of morality.

The disposition of Greece as the set, setting and reference for Mohaiemen’s film is operating on many levels, often letting references slip by you. That the work was to open in Athens for a German show was already forming a critical cartography along the movement of the many in search of opportunity, safety and asylum. I went back to think about the beginning, where I was introduced to a man in the pursuit of grooming himself, shaving and brushing his teeth – middle-aged, eventually dressed in a tan suit at his home maybe, perhaps getting ready to go somewhere. The work has absolute disregard for time as a meter, often using it malleably as though his unnamed protagonist and his derelict set were living in an alternate dimension.

And then, in a silent snap, the space expands into a big hall, turning the man into a tiny occupant to the centre-left of the frame – an airport that well lives its twilight. The decentralised frame of the artist’s lens also indulges in the visual othering of his protagonist, or is it distancing from the emotional forbearance of a story so personal to Mohaiemen? That the work stems from a personal story of his father being stranded at the airport in Athens becomes an entry to the many intended and consequent readings of the work, making it a premise (both physical and psychological) to contemplate the urgencies of our time – a lacunae to house the many thousands who seek. This dilemma forms the heart of Tripoli Cancelled, a giving into or letting go for the artist in the re-living of the uncertainty in his father’s ordeal and the fictions the mind makes of fear for the unknown.

The unsettling vaccum is set into motion by the man walking through the vastness, made even more apparent and distant by the lack of other human presence and barely any props to fill the space. Mohaiemen barely lets the camera concentrate on this decay, allowing you to wander your eyes and notice parts of a collapsing ceiling, the weeds breaking through concrete and a constant tint of dust on everything (but his leading man) through his frames. For moments he invests a sense of sovereignty in his protagonist as he navigates and indulges in this kingdom and its ruins. He then in the very next instant, renders him powerless.

A scene from Tripoli Cancelled.

We must return to the crisp tan suit again in its symbolism of the readiness to go home and be presentable to meet people. It is perhaps the only object of care and precious measure to this stranded man. In the neat folding and careful hanging of the suit, he preserves his hope to be home. In a visibly awkward attempt of opening a tin of food and saving his trousers from stains; the coat already hung on the rusted frame of helicopter like it were a coat rack, Mohaiemen continues to keep this readiness intact. The man in transit is also a man in waiting and the wait is qualified in Mohaiemen’s erratic time, making it all the more palpable, anxious and fatigued.

Time is also switched across history, in referencing Hannah Arendt witnessing of  the trial of Adolf Eichmann, an organiser of the holocaust. In writing about Eichmann and in Arendt’s coinage of the now overused phrase “banality of evil,” she continues to make sense of the genocide perpetrated by the Nazis as a crime against humanity. She argued that the displacement and annihilation of certain populations was an attack on humankind, and not only those that it directly affects. This provocation comes back time and again in the film, for example in the protagonist’s mention of the Line of Control, the de-facto border between India and Pakistan since the 1972 Simla Agreement on the contested region of Kashmir or in Agamben’s reading of Primo Levi’s notes on surviving Auschwitz. Building on from Agamben, Mohaiemen’s protagonist contemplates the act of surrendering. In Auschwitz-Birkenau, he notes, to become Der Muselman was to surrender. It was used to refer to a prisoner who had given up.  In Majdanek, the word used was “Gammeln,” meaning to be rotting on the inside. Whilst in Stutthof, they were called “Kruppel,” translating as cripple.

In reading a chapter from Richard Adams’ Watership Down and speaking of warmth, a pot of coffee heats over invisible flame with the protagonist sitting against the cold backdrop of twilight blue. Between narration of letters to his wife and readings from Adams’ book, Mohaiemen offers an incidental  reading of those in-between certainty and speculation, surrendering and hope.

Watership Down, illustrated in the story of brothers Hazel and Fiver and their desperate quest of home is a striking allegory of our current moment. The term desperate is perhaps not enough to demonstrate the seething relationship between longing and the greed to be in the midst of those we love. Like the rabbits, Mohaiemen’s protagonist must conquer his deepest fears time and again in order to endure. Enunciated in the emotive and recurring activity of writing letters, this vulnerability belongs as much to Mohaiemen as it does to his actor – as they continue to make sense and come to terms with time and emotion.

Another scene from Tripoli Cancelled.

Naeem’s 747 awaits its passengers. His unnamed protagonist cosplays a pilot going through the usual drill of inflight announcements and pre-flight prep to a handful dummies. This plane never takes off and here lies the truth about exiles, of state sanctions and the elusivity of hope; for acts of adapting and normalising to occur. Greece at the centre of the refugee crisis with migrants from both east and south, and as country with its own demons, a perennial economic crisis aggravated by imposed austerity, continues to be a site like Mohaiemen’s Airport – an in-between space of uncertainty and waiting.

This brings me back to time. In this 95 minute saga, time becomes space – a site for reflection – for thoughts to permeate the haunting silences of when Mohaiemen’s actor is talking in wet-walled stares. Sometime, the actor brings forth a telephone receiver with a broken cord. With deft certainty, he spells out the country and state code as 88-02, a direct connection to home (and a fragment of the artists’ landline number from the 1980s until sometime around 2000). The call is tried but is sadly missed. He continues to tell the operator that he has it all correct. The call is tried again and is sadly missed again, the apparatus that never come together and fails the protagonist as they fail so many others.

Here I’d like to give into temptation and name actor Vassilis Koukalani, Mohaiemen’s protagonist, who essays the many who are in-between home and asylum – with a upsetting sequence where he breaks down into measures of frustration, fear and fatigue. In between his baritone voice led episodes stand haunting silences, allowing us to stray, gather ourselves and move on.

In a scene of heartbreaking humour, he plays a pilot flying a chopper lifted by the sound of his spitting mouth-mimicked motor. The chopper is stuck in turbulence and Koukalani takes control of the craft – one of those few moments where he exudes certainty and the will to pass the rough.

The film ends where I begin this piece.

Mario D‘Souza is a writer and curator based between Delhi, Baroda and Goa.

Tripoli Cancelled was filmed in Ellinikon Airport, designed by Finnish architect Eero Saarinen between 1960 and 1969. It was closed in 2001 and was later used for housing refugees. It has since been sold off for real-estate development as a part of the European Debt negotiations.