'The Prom' Is Breezy, Peppy and Tells Us a Gloomy Story Doesn't Have to Be Dreary Itself

The Netflix film is impressive when it tackles and resolves individual stories. But it occasionally falters at processing the big picture. 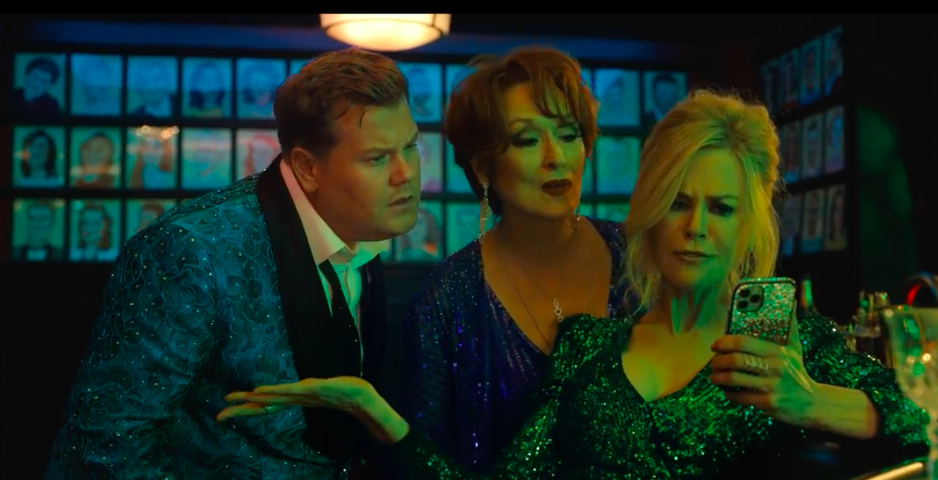 A still from 'Prom'.

The American musical The Prom, streaming on Netflix, dances around a simple question: Will Edgewater High School, in Indiana, hold the annual prom?

The head of the Parent-Teacher Association, Mrs. Greene (Kerry Washington), has cancelled it, because Emma Nolan (Jo Ellen Pellman), a high school senior, wanted to attend it with her girlfriend, a Black girl named Alyssa (Ariana DeBose), the daughter of the PTA head. Edgewater is a small conservative town, and same-sex dates flout communal values.

The other part of the film revolves around Broadway performers Dee Dee Allen (Meryl Streep) and Barry Glickman (James Corden) whose recent musical has been panned by many outlets, including The New York Times, for being narcissistic. Accompanied by Trent Oliver (Andrew Rannells), a bartender and a Juilliard graduate, and Angie Dickinson (Nicole Kidman), a chorus girl who recently quit her job on the musical Chicago, the Broadway duo travels to Edgewater to champion a cause to appear ‘selfless’ and ‘empathetic’.

Directed by Ryan Murphy — and adapted from a 2018 Broadway musical — The Prom lifts a heavy subject with a feather-light touch. There’s a lot going on here: the self-absorption of New York elites, the clash between the liberal and conservative Americas, a hidebound town crushing personal freedom, familial discord, erasure of identities, and teenagers paying the price for who they are — a cost that includes social exclusion and ridicule. But The Prom has the mind of an adult and the body of a teenager: it is breezy, peppy, and funny. The film’s songs — more than one-and-a-half dozen, with two originals, including a Streep rap — sustain the warm, playful mood.

The Prom is always up for some song and dance, like a restless teenager who can’t be sad for long, even if she tried.

The best example of that is an early song, Just Breathe, where Emma is relaying her frustration of growing up in Indiana:

Such pieces don’t let us pity the protagonist and remind us that a gloomy story doesn’t have to be gloomy itself. Most numbers, like Just Breathe, are cheeky, buoyant, self-aware, and waft out in lilting waves. It also helps that they advance the story and reveal character, thereby not padding or overwhelming the film.

Beyond Emma, The Prom also bares the hollow celebrity culture. Dee Dee, a performer past her prime, believes this initiative can lead her to another Tony Award (her third), that the “liberals from Broadway” are being “great people” who will “save” and liberate people like Emma from small-town parochialism. The people of Edgewater, on the other hand, see this as a political intrusion, likening it to “big government” snatching their “freedom of choice”. Dee Dee is also battling a personal crisis — the realisation that her divorced husband never loved her — and so, in a sense, she’s a true embodiment of star: twinkle and shine from afar, but at the core, a big exploding ball of gas. This new ‘mission’ then edges her towards a personal surprising realisation.

Ditto Barry, Trent, and Angie, who are dealing with their own troubles. The trajectory of Barry, who was thrown out of his house at the age of 16 for being gay, thrums with a wounding betrayal that is both personal and universal. Trent and Angie, performers who craved spotlight but got anonymity, complete the ensemble and reflect the story of Emma: scarred individuals looking for balms.

The film is impressive when it tackles and resolves individual stories. But it occasionally falters at processing the big picture, appearing superfluous and simplistic. The theme of Broadway saviours, for instance, is quite obvious, yet it’s repeated again and again by Dee Dee. Same is true for the collision between the two Americas.

Screenwriters Bob Martin and Chad Beguelin are smart enough to see through the phoniness of celebrities, but not sharp enough to realise that they themselves, at times, are stereotyping and flattening the nuances of small-town America.

Apart from the school principal Tom Hawkins (Keegan-Michael Key), almost everyone in Edgewater is callous and indifferent, needing sermons on inclusivity by the evolved city slickers.

Even the conception of the female lead, a casual figure — or a “butchy duck” as Barry calls Emma — lacks imagination. The Prom, for these reasons, sporadically leans on the crutches of truism, becoming literal and obvious, dimming its own luminosity.

The redeeming part about the musical is that it’s always alive at the level of form, mitigating its flaws. The camerawork, mimicking the songs, is animated and agile, heightening the joyous mood. The lighting changes deftly, from cold to warm, as the dialogues segue into songs.

The acting, too, is adequately compelling. Streep brings to her role a mix of insecurity, narcissism, humour, and occasional vulnerability — it’s the kind of performance that doesn’t challenge the Hollywood veteran, helping her sail through it. Pellman, the film’s moral centre, acts her age — a hesitant, diffident teenager trying to find acceptance yet someone not afraid of rebelling. Kidman shines in a relatively small role — an enigmatic presence at first whose burning ambition and disappointment are slowly revealed through the course of the film. But Glickman’s performance and story are by far the most entertaining and melancholic, replete with silly humour, searing realisations, and an uplifting coda.

The Prom is an enjoyable, standard Hollywood fare, an earnest, simple, and heart-warming musical. It’s the kind of film where an oft-heard, soft sound prepares you for a poignant scene.

A jaded, cynical heart may scoff at its simplicity, but that’s the point: in today’s times of incessant gloom, The Prom is a bright, cheery sound — it’s the kind of escape that doesn’t feel cheap.