Movie Review: 'The Accidental Prime Minister' Is Made to Confirm Your Bias

Anupam Kher is off-kilter in a film stripped of nuances, meant only to amplify the facile public imagination. 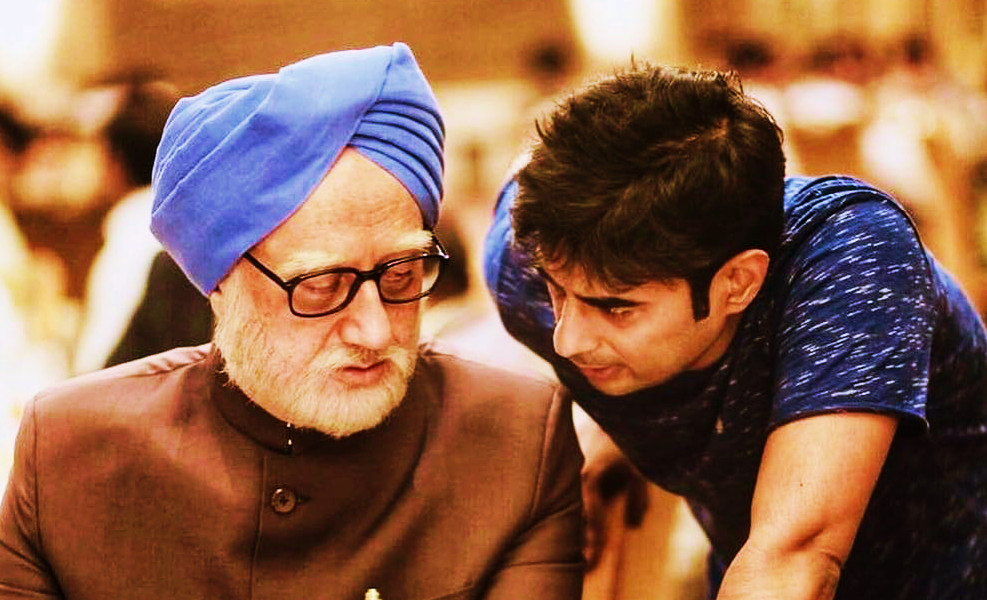 Vijay Ratnakar Gutte’s The Accidental Prime Minister opens to a booming background score. Behind the opening credits, the visuals are of monuments: Hawa Mahal, Qutub Minar, Taj Mahal – you wonder how these are relevant in a film about Manmohan Singh (Anupam Kher) – and then, Red Fort and Rashtrapati Bhavan.

If the visual aesthetics seem odd, then so are the loud aural flourishes, in a film about a man criticised for being silent. Before its first scene, The Accidental Prime Minister reveals a stark disconnect between the man and the story.

Maybe that was the intention: that much like the book, The Accidental Prime Minister, a memoir by Singh’s media advisor Sanjaya Baru (played by Akshaye Khanna), the film is a story told by an outsider from the inside.

The film presents Baru as hyper-charming and suave: he frequently breaks the fourth wall, smokes cigars in his office, helps Singh in testing times and brushes aside the underlings of Sonia Gandhi as if flicking lint from his jacket. Quite predictably, the film doesn’t grant Singh the same respect.

Despite his love for political posturing, Kher remains a fine actor. But his portrayal of Singh is a ludicrous caricature: from the way he tries to ape his voice (so ill-suited on Kher that you’re always reminded of the actor, not the character), and his gait (a bizarre glide, his wrists disconnected from his shoulders), to his reticence (expressed as Singh standing silently in a corner, like a child denied his daily quota of candy).

Any film with such a simplistic and banal interpretation of the central character can only go as far. Some films want to tell a story, others want to stoke a feeling – The Accidental Prime Minister is the latter. It exists to confirm your bias – over and over again – in the laziest ways possible. In the world of this movie, people are a collection of adjectives broadcasted by the media. Sonia Gandhi, for instance, is shown as shrewd and controlling; her son, Rahul, as ignorant and arrogant; and Singh as servile, hesitant and timid.

The entire film looks reverse-engineered — its creators already know where to arrive; the film, then, is just a collection of milestones. The makers almost look scared that the audiences will start thinking on their own, so they keep dropping signage about where to go and how to feel about the journey.

We’re told about the characters’ traits, their goals, their ulterior motives, depriving the film of intrigue or audience participation. Besides, given that we already know the larger picture – the trailer was plenty – there’s little scope to enter this movie.

The Accidental Prime Minister claims to be sympathetic towards Singh – Baru calls him a “genius”; he’s seen as the right man in the wrong party – but there’s scant evidence that the makers even superficially care for him. They’re more interested in reinforcing a certain image and, while doing so, simplifying a complex, gifted man and robbing him of agency: spotlighting the persona and sidelining the person.

The film sees the prime minister as infallible, but it exemplifies his flaws through scenes that are comedic to the point of mockery – him practising and bungling his speech, looking confused and clueless, lacking control. Singh is reduced to a craven stereotype who relies on his advisor to run the nation.

The Accidental Prime Minister wants to elicit just one emotion: pity. It drowns out every other possibility.

But even in this uni-dimensional apologia, some actors have fun. Khanna, slaying with a smile, plays Baru with wicked aplomb – a smile here, a nod there, a funny-acerbic mould throughout – which, despite being divorced from reality, makes for compelling drama. The same is true for Vipin Sharma, as Sonia Gandhi’s secretary Ahmed Patel, who revels in the theatrics of his role: issuing diktats, deflating Singh.

The other two characters – Sonia and Rahul Gandhi (played by Suzanne Bernert and Arjun Mathur) – are a humourless regurgitation of their public images, adding nothing new. Which holds true for this political drama as well: a story stripped of nuance, amplifying the facile public imagination, ultimately sinking the man it purports to rescue.