With the 2019 general elections as the driving force, the past few months have seen a spate of biographical movies lined up for release. The latest among them, PM Narendra Modi, has run afoul of the Model Code of Conduct and its release has been stayed by the Election Commission. Another film, Lakshmi’s NTR, directed by Ram Gopal Varma has been allowed to be screened in Telangana but not in Andhra Pradesh till the completion of elections. Lakshmi’s NTR is based on former AP chief minister N.T. Rama Rao. However three other films, Yatra, NTR Kathanayakudu and NTR Mahanayakudu were released as they were deemed not to fall within the purview of the model code of conduct (MCC).

In May 2018, the film Mahanati, directed by Nag Ashwin, was released. A biographical film based on popular Telugu actress Savitri, the film was a blockbuster and drew huge audiences. It was able to withstand competition from even big-budgeted films boasting star power.

Also Read: ‘C/O Kancharapalem’ and the Politics of Unspeakability of Caste

After the tremendous success of Mahanati, NTR’s son Nandamuri Balakrishna announced two biopics: NTR Kathanayakudu and NTR Mahanayakudu. The former was released on January 9, 2019 and the sequel was released in February 14, 2019.

Ram Gopal Varma’s Lakshmi’s NTR is also based on NTR, but focuses on him after Lakshmi Parvathy (his second wife) enters his life. The movie was meant to be released on March 22, 2019, but the Election Commission and Central Board of Film Certification (CBFC) did not clear it. After RGV petitioned the Telangana high court, the film was released on March 29, 2019.

Writing biographies or making a biopic is an intricate process of presenting the complexities of human lives. However, the politics of biography/autobiography signifies a careful selection of life events to present them from a particular viewpoint. Almost all contemporary biographical films portray a unilateral dimension of the lives of celebrities. Yatra, a film based on the life of Y.S Rajasekhar Reddy, portrays his padayatra which played a crucial role in bringing him to power in May 2004.

While the film makes implicit remarks about the factionist past of Rajasekhar Reddy’s political career, it explicitly deifies him. It highlights his attempts to understand the grassroots issues and struggles of the rural masses.

Mahanati captured various dimensions of Savitri’s life and struggles to establish herself as a leading actress. However, the film highlights the polygamous and promiscuous husband Gemini Ganesan as the core reason for her tragic death at the age of 49.

While honesty, bravery, patriotism and heroism are projected as the personal qualities of NTR in both NTR Kathanayakudu and NTR Mahanayakudu, the films do not explore the complex process of caste consolidation of Kammas during the 1970s and 80s. The film highlights the failure of the Congress against the backdrop of Emergency from 1975 to 1977. While the Emergency created unrest among the people, it also helped the process of caste consolidation. Both the films unsurprisingly, make deliberate attempts to glorify NTR as chief minister of AP, but also deflect responsibility for some decisions.

A controversial decision to reduce the age of retirement of state government employees from 58 to 55 years in 1983 led to strong resistance from employees. It is depicted as a decision taken by NTR after being misguided by Bhaskar Rao (his close associate).

The family planning programme introduced by the Indian state in 1951 has been disseminated using various media in the 1970s. For example, school textbooks praised it as “benefits of a small family”. Distribution of condoms and incentivising tubectomy and vasectomy by the state led middle classes denigrating the lower castes (SC/STs) and Muslims, who were believed to not practice birth control.

NTR had twelve children. However, the film NTR Kathanayakudu avoids any reference to his children. But NTR Mahanayakudu tries to explain the rationale behind his choice. In the film, the political question is relocated to the heterosexual conjugal space. NTR, while his wife is on her deathbed, explains that because their first died to small pox, his wife wanted to give birth to as many children as she could, so the first born might take rebirth in her womb one day.

Lakshmi’s NTR narrates the the actor-politician from the day Lakshmi, a school teacher enters his life. Though the film tries to bring respectability to man-woman relationships outside the realm of marital conjugality, it also presents NTR’s daughters, sons and sons-in-law consistently in a negative light. The film doesn’t explain the reason behind their negative response towards widower NTR’s second marriage. The property question that generally arises in the context of a second marriage has been downplayed.

However, it condemns the various allegations and character assassinations that Lakshmi endures from NTR’s children and sons-in-law. The character of Lakshmi is elevated through a portrayal of a platonic and imperceptible relationship with NTR. NTR’s son-in-law N. Chandrababu Naidu is projected as an important conspirator who overthrows him from the position of CM.

It’s important to understand the ideological gap between the contemporary audience and the period in which these films are set. For instance, in Mahanati, Savitri is supposedly the third wife of Gemini Ganesan. The film does not portray the relationship between Gemini Ganesan and Pushpavalli, whose daughter Rekha is a famous Bollywood actress.

Gemini Ganesan’s character says he married his first wife Alamelu, the daughter of his affluent uncle, out of helplessness. He says his family was broke after his father’s death. Therefore, it was a loveless marriage with social and economic commitments. But he also says that he has no love for Pushpavalli (citing no reason) with whom Ganeshan must have had a consensual relationship/marriage. Other than the cursory reference, Pushpavalli is totally absent in the narration. Savitri is portrayed as the second wife and not as the third wife.

However, if the film depicts Savitri as the third wife as she chooses to enter conjugality with Ganeshan who already had two other wives, it might make her appear to be complicit in the “injustice” meted out to those women. This might have put at risk the empathy of the contemporary middle class audience for Savitri.

The contemporary middle class ideology of monogamy constructs “any form of polygamy as injustice to women”. The collective memory of polygamy among Hindu middle classes has been erased in contemporary times with the rise of Hindu nationalism after the 1990s. Thus, the quintessential middle class Hindu is ‘monogamous’ as against the constitutive “other”, the polygamous Muslim male.

Also Read: In Tollywood, the Bottom of the Pyramid Is Leading the #MeToo Movement

However, historically the Hindu middle class man has been known to be polygamous and had access to women through second/third (finite number of) marriages, concubinage, Devdasis, sex workers and lower caste/Dalit women. Historically, monogamy has only been enforced on Brahmin, upper-caste women in order to protect the caste purity. Mahanati is set in the 1950s, a period in which Hindu men could marry any number of women.

The Hindu Marriage Act (1955) prohibits marriage of Hindus whose spouse is alive, thus making polygamy illegal in India since 1956. Even after ruling out polygamy, the cases of second wife or concubinage were so large in number that most of them were dealt at the level of caste panchayats to pronounce “justice” to women in polygamous relations in absence of protection from the law of the state.

The film Ankur directed by Shyam Benegal captures such transformation of traditional society that accommodates the ‘concubine’ in the conjugal life of Hindu male, to the modernity in which Hindu middle class male is ashamed of any public acknowledgement of polygamy and his access of lower-caste women as sanctioned by the caste system.

In contemporary society, any woman who accesses a married man or is accessed by a married man is constructed as being “unjust” to the man’s first wife. The question is not simply being “immoral” or “sexually impure”, but also being complicit in the process of injustice done to the first wife from caste endogamous “arranged marriage”.

This contemporary ideology led to various cases of violence and lynching of ‘second wife’ or ‘concubine’ in past two decades. Though the privileges of social, legal and economic protections are available to the first wife, she is often constructed as the “victim” of polygamy in the modern context, despite the fact that the “second wife” or “concubine” is actually left with no social and economic securities.

Since the contemporary middle classes cannot empathise with a woman who chooses to be the third wife of a man and stigmatises her as being “unjust”, Mahanati chooses to avoid the explicit portrayal of Pushpavalli. Moreover, the film cites the husband’s promiscuity as the reason for Savitri’s death. 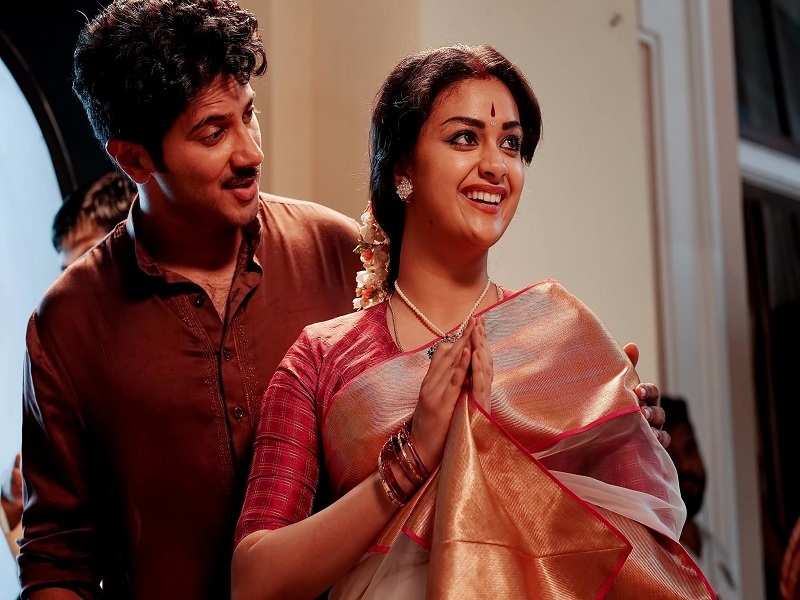 A still from the movie Mahanati.

NTR Kathanayakudu and NTR Mahanayakudu, both portrayed the relationship between NTR and his first wife Tarakam (played by Vidya Balan) as the ideal “love”, placed within the heterosexual, caste-endogamous marital conjugality. Both the films depict an unflinching loyalty of both the husband and wife. The film ends with the death of NTR’s first wife Tarakam in 1984, avoiding the portrayal of the second wife, as depicted in RGV’s Lakshmi’s NTR.

Lakshmi’s NTR is a relief from the ideology of middle class monogamy. A young married woman Lakshmi, is fascinated by the Telugu film star and politician NTR. She deifies him as a god. Her love for NTR is constructed beyond the social boundaries of marital conjugality, wifely devotion, monogamy and the empirical boundaries of the village from where she travels to the city to meet NTR.

Lakshmi loves NTR yet has warm feelings for her husband too. There is no melodrama about her firm decision to legally separate from her first husband to marry NTR. She shows no signs of mental conflict during her decision of remarriage. The film intrigues the middle class audience, who find it difficult to escape from the binaries such as morality/immorality and good woman/bad woman. Lakshmi is a compassionate wife, mother, as well as a devotee of NTR who follows her passion and heart’s desire breaking the boundaries of marriage and motherhood.

Reminiscence of feudalism and caste consolidation

Reddys and Kammas, the landowning castes, have consolidated their caste groups to negotiate their space in electoral politics of the modern democratic state. This forms the backdrop of films like Yatra, NTR Kathanayakudu and NTR Mahanayakudu. They reimagine the hegemonic power of a particular caste group through to justify nepotism for the “protection and welfare of the larger masses”. On the one hand, leaders like NTR and YSR implicitly consolidate their respective caste groups, in the films. But there is an explicit portrayal of how they are empathetic to marginalised sections.

Also the ‘period film’, as a genre, enables the collective space for audience to cherish memories of feudalism unapologetically. The period film transports the audience into another socio-cultural milieu where there is validity for the ideals that may be unacceptable in contemporary times.

Therefore, hero-worship, fanaticism, aggrandising certain caste identities seem acceptable for the contemporary audience, as it is set in a different time period. Portrayal of NTR’s so called flawless leadership, uncorrupt public face and highly monogamous personal life enables the audience to accept hegemonic feudal figure as the leader and savior of the masses.

These biopics provide a collective momentum for the ideals of consolidation of castes while the larger audience are provided with vindication of lives and achievements of these “heroes” and iconic political figures.