'Stree' Presents a World Unknown to Us: One Where Men Are Threatened

The Amar Kaushik-directed film uses the template of horror to examine and question our prejudices. 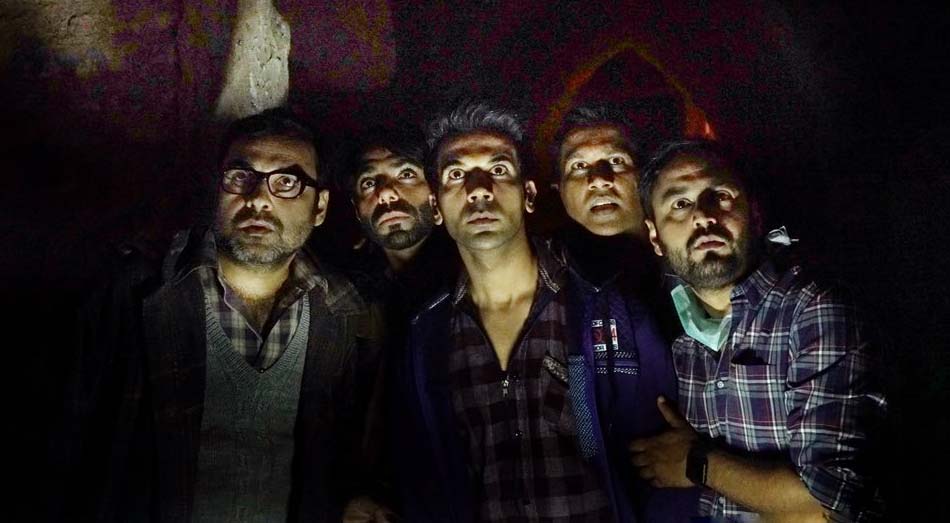 A still from 'Stree'.

Stree, directed by Amar Kaushik, opens to a sleeping village, Chanderi, in Madhya Pradesh. It is late in the night – nothing can be heard; nobody can be seen. As the camera glides through the lanes of Chanderi, we see a one-line message painted on its walls: “O Stree kal aana [come tomorrow, woman].” That, we soon find out, is meant to ward off a witch who abducts men during the night after stripping off their clothes. Stree presents a world not known to us: one where men are threatened.

The main protagonist here, Vicky (Rajkummar Rao), is the son of a famous tailor. Unlike others, Vicky isn’t superstitious. He also doesn’t want to join his father’s business. But Vicky can weave magic. When he’s in the shop, numerous women (even the ones from nearby villages) line up to get their dresses made. He doesn’t even need to take their measurements; he takes a look at them, asks them to turn around, and he’s done. This information is given to us via snatches of dialogues and two songs intercut with each other – small inventive techniques that render this portion hilarious. This style, in fact, recurs throughout the film. Even though Stree is horror, its heart beats for humour.

Spread over four nights, Stree revolves around the relationship between Vicky and a mysterious woman (Shraddha Kapoor) who is new to the village. She approaches him to design a lehenga in two days – an almost impossible task – and Vicky is about to turn her down, but then she touches his hand and requests him (“Bicky please!” gets stuck to his memory), and this sewing machine incarnate becomes a gooey mess.

Besides his new obsession, Vicky spends time with his two old friends, Bittu (Aparshakti Khurana) and Jana (Abhishek Banerjee). The former is cynical and distrustful, the latter naïve and gullible. The banter among them is easy going and constant, unfolding like a pleasant mini-movie in itself. Kaushik, at the same time, is able to build intrigue about the movie’s main questions: Who is Stree and what does she want – and who is this woman whom Vicky has fallen for? These questions constantly elude us, causing us to be with the film at all times.

Kaushik is also able to do that because he’s ably supported by his cast. Khurana, as was clear in Dangal, gets the oddities of Indian life, using that to good effect to turn even the regular situations humorous. Banerjee, as the straight-laced member of the group, complements Khurana well, alternating between slipping in the background and driving – and owning – scenes. Vicky’s cheerfulness and innocence elevate this mix, making it more compelling and funny. Rao is an excellent actor, and Kaushik recognises and respects his hunger, giving him a role – of a young man transformed by the power of love – that may look formulaic on the surface, but one that, under his control, undergoes sly reinvention and overt subversion. (There’s a spooky scene in the climax made hilarious by Rao’s impersonation of Shahrukh Khan.)

And then there’s Pankaj Tripathi acting the hell out of a small role – in the most Tripathian way possible – by (seemingly) not acting at all. Playing the role of Rudra, a man deeply interested in the mechanics of the paranormal, Tripathi is the film’s moral pivot and funnyman, delivering side-splitting lines with a deadpan face. This acting style, especially used to elicit laughs, isn’t particularly novel, but Tripathi makes it his own by always being alert to his character and his world, bringing to his part credible and unique specificity. To watch Tripathi act like this – in film after film after film – is not just a pleasure; it feels like a gift.

Written by Raj Nidimoru and Krishna D.K., Stree is consistently funny, indicating that the director duo – known for their initial impressive films (Flavors, 99, Shor in the City) but later devolving into mediocrity – has regained their elements. More importantly, Stree’s humour serves a larger purpose: it is critiquing the genre of horror itself. The payoffs in several scenes come not in the form of horror but humour. This is both a smart cinematic subversion and an accurate way of interpreting life and its many vagaries – a messy kaleidoscope that cannot be contained to, or defined by, one particular mood.

What’s also striking about the film is its politics. As it gets closer to revealing Stree’s identity, we find out its true concerns. Earlier in the movie, a big group of people in a party is horrified by the presence of Stree. The light goes off, and she takes away one of their friends. Flashlights waving and huddled together, they feel paranoid and cornered – a standard scene in a horror film. That is one way to look at it. The other is this: a group of men terrified by a woman. Where have we seen that before? As Stree begins terrorising the village, her targets, men, begin changing to protect themselves. They start wearing sarees; they tell their wives to come home early because being alone is scary; they take out processions demanding their freedoms.

The notion of emasculation is at the heart of Stree. Being feminine is no longer an insult in Chanderi; on the contrary, it becomes a marker of safety. In the light of #MeToo movement and 2017 Women’s March, these scenes acquire an unlikely poignancy – a case of art dignifying life. It’s all the more gratifying that these motifs aren’t a result of moral posturing or hand-wringing; they belong to this film.

What doesn’t belong here is an item song – imposed on the movie early on. But what’s more worrying is the arc of Kapoor’s character, which, part of some narrative sleight of hand, doesn’t add up. This could have potentially derailed the film, given that it is borne out of convenience and a desire for a twist ending, but with so much else going for the film, it only feels like a minor annoyance.

Like Ghoul, Stree uses the template of horror to examine and question our prejudices. It is worth noting that horror films, of late, don’t feel unreal anymore. That says as much about these films as it says about our times – and us. Films, after all, don’t exist in a vacuum.