In all his literary works, Ray was an unequivocal champion of the underdog. 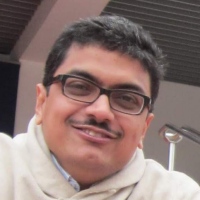 A dog chuckled when its master fell off a broken chair. A ventriloquist’s puppet turned grey and died of a heart attack. An android grew a conscience and then outgrew it to commit murder, and a giant orchid knew malice and cunning, and had blood for sap in its veins.

Commenting on his literary works in an interview, Satyajit Ray said, “Actually, I’ve written all types of stories, but I usually like to write about lonely people and things happening to them.”

There were men like Badan Babu, who spent their evenings in a desolate corner of Curzon Park, weaving a new story for an invalid son at home, and Bonku Babu, who from their small nest in mofussil towns dreamed of the Aurora Borealis. There were men like Ratan Babu, scouring railway timetables to quench their modest but irresistible wanderlust at the first hint of vacation, and men like Patol Babu, confusing chilli pepper for black cumin at the bazaar, euphoric and befuddled at the slightest possibility of satisfying their undying passion for acting.

They were men happily reconciled to their ordinary prosaic lives in a world deeply rooted in Bengali middle-class ethos and traditions. From the bachelors’ mess in Mirzapur Street to the serpentine alleys of Shibthakur Lane, from lofty office buildings in Dalhousie Square to the theatre halls on Bertram Street – this world is very real. Bustling flea markets, tranquil riversides, enticing eateries, iconic auction houses and aroma of old books – there is an element of snug intimacy and we soak in all that this enchanting world has to offer.

Ray effortlessly extends its realm beyond the metropolis but it is always within the conservative middle-class limits – from the New Mahamaya Hotel in an obscure little town in erstwhile Bihar, to the secluded forest retreat in Bharatpur, we never feel alien or out of place; from the Evergreen Lodge in Fraser Town to the haunted mansion in Raghunathpur – the lucid language, fluent storyline and thorough portrayals, make it all so vividly familiar.

Ray does this to bring us closer to these men and their milieu, and doles out empathy. He also does it to heighten the sense of anomaly of the events and revelations that follow.

Perhaps the most astounding aspect of Ray’s short stories is that on the surface it looks trivial and tempting in equal measure. Our indulgence draws us deeper into this world, defined by middle-class hopes, whims and fancies on the one hand, while on the other, everyday reality coexists with the disturbing and the diabolical in perfect harmony. A world where bashful men are teased to the brink of tears but men still pause to gaze at double rainbows in the sky. A world where dogs laugh, dead woods cry and men turn into snakes.

In the abundance of details Ray treat us with, we overlook many trivia as ostensible trifles. While all of it adorns the narrative most beautifully, some of it makes us wonder, while some of the others, as the plot unfolds, assume serious proportions and even explodes to critical limits.

Who could have gauged the enormity of Imli Baba’s prophecy concerning the resurrection of Balkishen? What made Kanti Babu shudder during the course of a perfectly normal conversation? What was it about Anath Babu’s boots or Tulsi Babu’s refusal to be lured, even by the kebabs at Mansur’s? And so many other conundrums, which are revealed only at the final denouement.

By his own admission, Ray enjoyed writing stories for its own sake. But delving deeper into his literature, we discover that somewhere beneath its slight surface, lies a deeper vein, exemplifying the essence of his life in art. It is also perhaps where the key to the comprehension of his humanist sense and sensibilities lies. It is epitomised by a profound interest in and observation of life. It is deep set in open-minded pragmatism with firm reins on emotions. It shines in the triumph of human values – simplicity, morality, friendship and above all, justice.

Beyond the encounters with the uncanny and the unexpected, the realities of middle-class life in Ray’s world oftentimes include denial and deprivation. In most cases however, we finally find a fulfilling closure, upholding honest innocent predilections, noble righteous principles and shunning the materialistic and the bourgeois.

Also read: Today, We Need Satyajit Ray’s Vision of Politics More Than Ever

Regardless of his daily struggle to make ends meet, Asamanja Babu flatly declined the obscenely enormous offer, revolted by the suggestion of forsaking his priceless canine comrade. Despite being swindled of his meagre means of monthly livelihood entirely, Badan Babu felt evenly compensated for by the fantastic suspension of disbelief meted out by the swindler himself. And, for all his pain and pathos, what gives us some semblance of solace is that at the end of his tryst with the ruthless world of commercial entertainment, Patol Babu at least was supremely contended with himself and the finesse with which he rendered even the piddling to perfection.

Ray reminds us that there is evil under the sun, but assures us that eventually a sense of rightness, prevails. The resolution may not always be holy, but it is always fair, with solemn regard for the settled order of nature and the fullest faith in its restoration and balance.

Notwithstanding the plethora of mitigating circumstances and our wholehearted sympathy, Ratan Babu, after all, could not get away with manslaughter; Dhurjati Babu became the cobra he killed without provocation overnight, while Shibu and Phatik showed immense restraint in not using the lethal antidote on Janardan Babu, but rather granting him time to abandon his demonic instincts naturally.

Apropos morality, Ray shows us how guilt is a compelling moral compass in the middle-class code of conduct and how the stricken seeks redemption to find peace. But isn’t their compunction in itself a telling testimony to the innate goodness and simplicity of these suffering souls? Perhaps it is, and that is what Ray implies. Otherwise, what could have prodded the recovered kleptomaniac to admit to a deed done in the far past, at the height of his disorder, years later – overcoming all embarrassment and awkwardness? What prompted the psychic collector of curiosities wistfully give up his walking stick? What persuaded the young, ambitious illusionist dedicate his magnum opus to his unsung unknown mentor?

The delicate care with which Ray outlines the bond between man and animals is also remarkable. Asamanja Babu’s initial motive for keeping a dog as pet may have had been to gratify his subtle anti-colonial sentiments to some extent. But then, as Brownie comes of age, we witness the blooming of an everlasting friendship, which takes solidarity to such an exalted height that when the millionaire offers Asamanja Babu a fortune to buy Brownie out, it is Brownie who bursts out into a derisive laughter amused by the silliness of the proposition.

Tulsi Babu’s nonchalant apathy masks his deep affection for Chanchu. While he is painfully aware of the conflict between the instincts of a terror bird from the age of dinosaurs and contemporary social customs, and tries his best to shield its shortcomings, Chanchu too for all his natural predatory predispositions never disobeys his master. Tulsi Babu eventually had to return Chanchu to the forest where he found him, but could never really let him go. Perturbed by the news of Chanchu’s savagery and worried by the warrant issued to gun him down, Tulsi Babu returns to the forest with Prodyot Babu to make a last ditch effort to rescue Chanchu. There is an undercurrent of nervous anxiety when Chanchu rushes to greet his master, but it vanishes as soon as Prodyot Babu lowers his gun. Tulsi Babu offers Chanchu food, implores him not to embarrass him further – like a weary father admonishing his errant son – and as he bids him farewell for one last time, a poignant chord is struck.

In all his literary works, Ray was an unequivocal champion of the underdog. He makes us grieve at their dejection and despair. He makes us rejoice in their jubilation and triumph. He never solicits pity, never endorses charity, but rather seeks salvation for the helpless, browbeaten, persecuted mutes with dignity, grace and a little bit of inspiration.

After all, why did the alien concern itself with Bonku Babu’s plight at all? What made it fulfil his dreams and deepest desires?

Satyajit Ray wrote primarily for teenagers and young adults. The thematic influence of his own youthful fantasies are abundantly revealed in his stories. His fascination with magic for instance, his penchant for the fantastic and the supernatural are plentifully evident. His narrative style though, bears the signature of a master storyteller. One who is totally acquainted with the harmonious space-time-identity balance of his subjects and in complete command of what he wants to tell us, when and how.

Stepping out of the train on the platform, Ratan Babu heaved a sigh of relief. The place seemed quite inviting. A shirish tree and its head from behind the station house, and there was a spot of red in its green leaves where a kite was caught in a branch. The few people around seemed relaxed and there was a pleasant earthy smell in the air… As he had only a small holdall and a leather suitcase, he didn’t need a coolie. He lifted his luggage with both hands and made for the exit.

Subtle, sparing, unremarkable details and yet they instantly bring out the essential elements of Ratan Babu so eloquently.

In all his stories, Ray does this with an easy flair and this indeed is the hallmark of a keen conscious observer, who is exceptionally smart and fiercely articulate as well.

Writing about his father’s legacy, Ray observes that while other masters of the nonsense genre deliberately kept the figments of their imagination at a deferential distance from our familiar world, Sukumar did the exact opposite. He brought his creations, with all their quirks and caprices, close to us by suggesting that they inhabit the very same world as ours. This, Ray asserts, is Sukumar’s finest achievement.

Ray emulates something similar in his own literary works as well. He too brings his subjects home by setting them in a world that we are most familiar and comfortable with. And since his dramatis personae are far less exotic than his father’s, in a familiar setting they become even more concrete and palpable.

As for myself, while I admire his astute sleuth and have the most earnest regards for the illustrious inventor, I identify more intimately with the various men in this world, sharing their sentiments – joys and griefs, and somewhere deep down silently regret that this delightfully nostalgic world, that is so charming and glorious in its own hue, is fast vanishing.

The most enduring image of Ray in my mind is embedded in this evocative old world charm, in his imposing study – the large cavernous room with lofty high ceilings and wide louvered windows, busy book shelves and writing desk, brushes, pens, inks, paints and above all, books. We find him seated at his piano, setting a song to music or composing the most felicitous background score, or ensconced in his favourite chair, engrossed in the pursuit of perfection – breathing life into a screenplay or enriching a children’s magazine with meticulous illustrations, contemplating the next great adventure of the sleuth or the inventor or perhaps just writing about lonely men and things happening to them.

Dipanjan Sengupta lives in Calcutta and works in a multinational software company. He is an engineer with interests in films of the thriller genre, the art of old European masters, Western classical music, Indian epics, and sinful food from all over the world.