Rustom Wallows in its Own Mediocrity

The characters in Rustom are little more than cut outs and caricatures; it is difficult to take the film seriously. 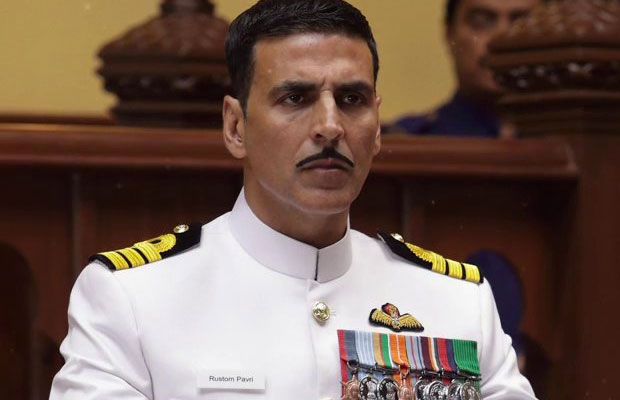 Akshay Kumar in and as Rustom

Most Bollywood directors, especially makers of mainstream productions, have a childlike fascination with realism. They like the idea of it because, they probably erroneously assume, it lends gravitas to their films; sets them apart from other releases, which are primarily an exercise in escapism; it gives them a goal worth pursuing and fighting for. But, as evidenced by a few latest films, those filmmakers just like the idea of realism, not what makes it, like kids standing at the shore of a cold lake, dipping their feet into it, too scared to take the plunge. But they’ve to take the plunge, how can they not, for reality is not something that can be appropriated to suit the conveniences of a filmmaker, to help sell a film.

Consider the movies, inspired by real life stories, to have released in the last few months: Azhar, Sarbjit, Budhia Singh — Born to Run. Each of these films had a fascinating story to tell, and each one of their directors not only wasted that opportunity but also insulted it. (In fact, Azhar and Sarbjit were so shoddy that Budhia Singh looked like some sort of a masterpiece compared to them.) And this week, in Rustom, starring Akshay Kumar and Ileana D’Cruz, we have yet another film that derives its dramatic mileage from a real-life incident, the K. M. Nanavati v State of Maharashtra court case.

Few court cases have been able to stir the consciousness of an entire city, touch its raw nerve, as effectively as the Nanavati case did for Bombay, a city whose saffronisation hadn’t begun yet (the Shiv Sena would be formed more than seven years later), and a state that had not yet been formed by linguistic borders (Maharashtra would come into being a few months later). But Rustom isn’t interested in the city (though it recreates the Bombay of 1959 fairly well); it’s too busy finding a hero for its story. And given that it features a Bollywood star, Kumar, the film has to find its hero at any cost—even at the cost of telling a credible story and respecting the nuances of realism.

An Indian naval officer, Rustom Pavri (Kumar) turns himself in to the police for killing a man, Vikram Makhija (Arjan Bajwa), who was having an affair with his wife. But instead of seeing a man caught in the knots of right and wrong, Tinu Suresh Desai, Rustom’s director, chooses to see someone devoid of any flaws. In fact, that’s how Desai begins his case: Rustom’s officers promise him naval custody, but he declines the offer; he doesn’t want to hire a lawyer, either, choosing to fight his own case; yes, he’s aware of the consequences, and assures the judge that, on losing the case, he won’t appeal to a higher court; he also doesn’t want to cross examine a female witness, because he can’t bear to publicly humiliate a woman. Rustom is a man so noble that his righteousness can be bottled and sold. It’s like Desai has already decided the fate of the case, and whose side he’s on, in the first ten minutes of Rustom; in such a case, why even make this film? If you’re not letting your story to surprise you, then why write it in the first place?

Moreover, nearly every character has been brought to life with such lazy writing that the film loses credibility early and easily. Take Erach Billimoria (Kumud Mishra), for instance, the owner of a tabloid that champions Rustom’s case. Erach, loosely based on maverick Russi Karanjia, the founder and editor of the tabloid Blitz, is shown as a buffoon in the film, someone who’s solely used for comic relief. Then there’s Vikram, the Villain of this drama, whose scenes are often underlined by a faux-ominous background score, in case we didn’t already know that he’s the Bad Guy. Then there’s Vikram’s sister, Preeti (Esha Gupta), who glares, smokes, and sighs throughout the film. Then there’s Cynthia (D’Cruz), Rustom’s wife, who cries in nearly every scene she’s in, trying her best to convince her husband and the audience that she deserves to be forgiven, through one contrived dialogue after another. Then there’s the public prosecutor, played by Sachin Khedekar, who plays the Bad Guy 2.0 in the film (as the original Bad Guy is dead). Here, Khedekar—who keeps moving his head back and forth, between the judge and the witnesses, as if watching a game of tennis; and raising his voice without a good enough reason—has been saddled with a part so juvenile and brain-dead that you can only pity him. And then finally, the audience in the courtroom scenes, which reacts so audibly to the case’s proceedings that it ends up becoming a character by the film’s end, frequently dispensing pearls of wisdom such as “He’s right”, “Isne toh kamaal kar diya!”, “yeh toh sahi hai.”

A film like Rustom, with such a poor understanding of people and their complex circumstances, cannot be taken seriously, and, it consistently becomes worse after the interval, regressing to a shoddier version of itself with every passing scene. There’s nothing valuable that this film has to add or say. There’s nothing remarkable about its mediocrity either.