Director Shankar Barua claims that his new film Rongeen, which harnesses local rap, is the first political musical in the country. 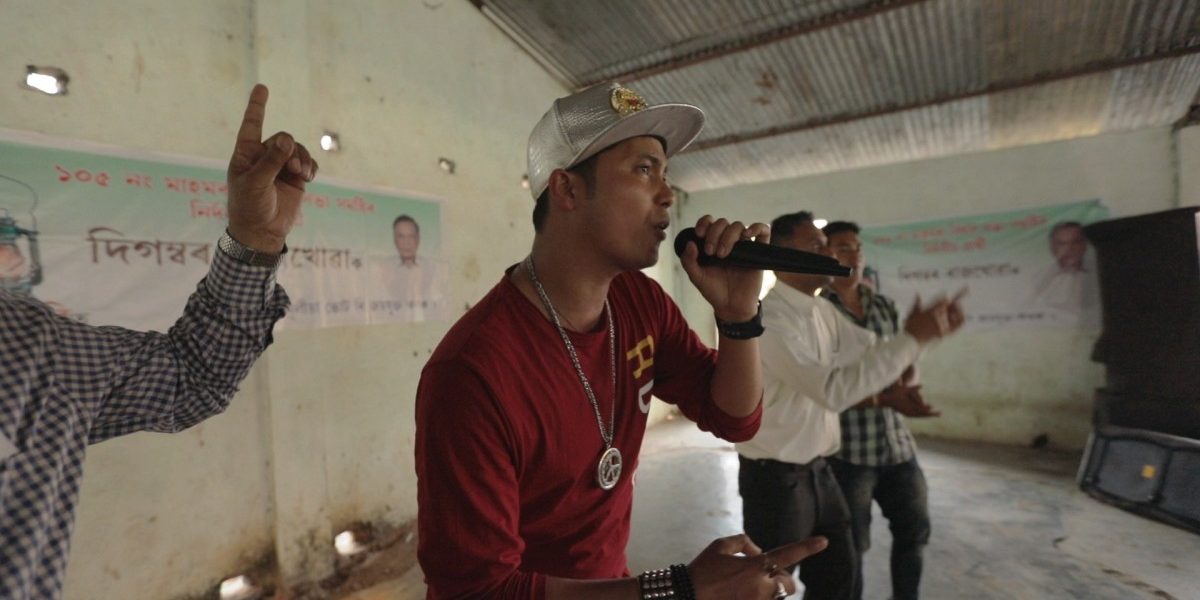 A still from the movie.

Broadly set on the banks of river Dihing, Rongeen is much-awaited in Assam. The film is the brainchild of Shankar Barua (screen name: Upamanyu Boruwa), who formerly directed critically-acclaimed films like Curiosity Shop and Grief on a Sunday Morning.

Having spent his childhood near the Mahmara constituency in upper Assam, he is familiar with much of Assam’s turmoil since the 1970s. Rongeen, Barua claims, is the first political musical in the country, using local rap. Shot with a 5D camera, non-actors and a tight budget, the film has required patience. It aims to ask some uncomfortable questions in the election season. Rongeen is not your aspiration-filled Gully Boy. In fact, Barua feels it is quite unfair to compare the two.

Excerpts from an interview:

Why did you choose the form of a musical?

The musical is a fantastic way of reaching out to the masses. Like Marshall Mcluhan had said, “Medium is the message.” I too wanted to explore something similar with my craft. I cannot emphasise enough how important the medium can be in engaging and driving people. It is the interplay of form and content in a motion picture which excites me.

So, in Rongeen, I haven’t evoked the river water in the same ancient way. Instead, I decided to use rap music to tell my story. The narrative runs through the songs in the film – it’s a carefully-crafted political musical.

What drove you to use rap and why?

I love rap – there’s no two ways about it.  However, I’m not a professional rap artist. If you think deeper, the region already has diverse traditions of oral poetry (kotha kobita). I say rap is fast kotha kobita. It has the ability to bombard a strong message with its rhythm and beats. One of my friends had introduced me to Kusum Koilash, whose rural rap was most amusing.

So, I decided to bring my political narrative to him and break him out of his comfort zone. If rap has the platform to talk about police brutality and racism in America, why can’t we focus on issues of local urgency here? It was quite tricky – convincing him of political rap and sticking to its authenticity. 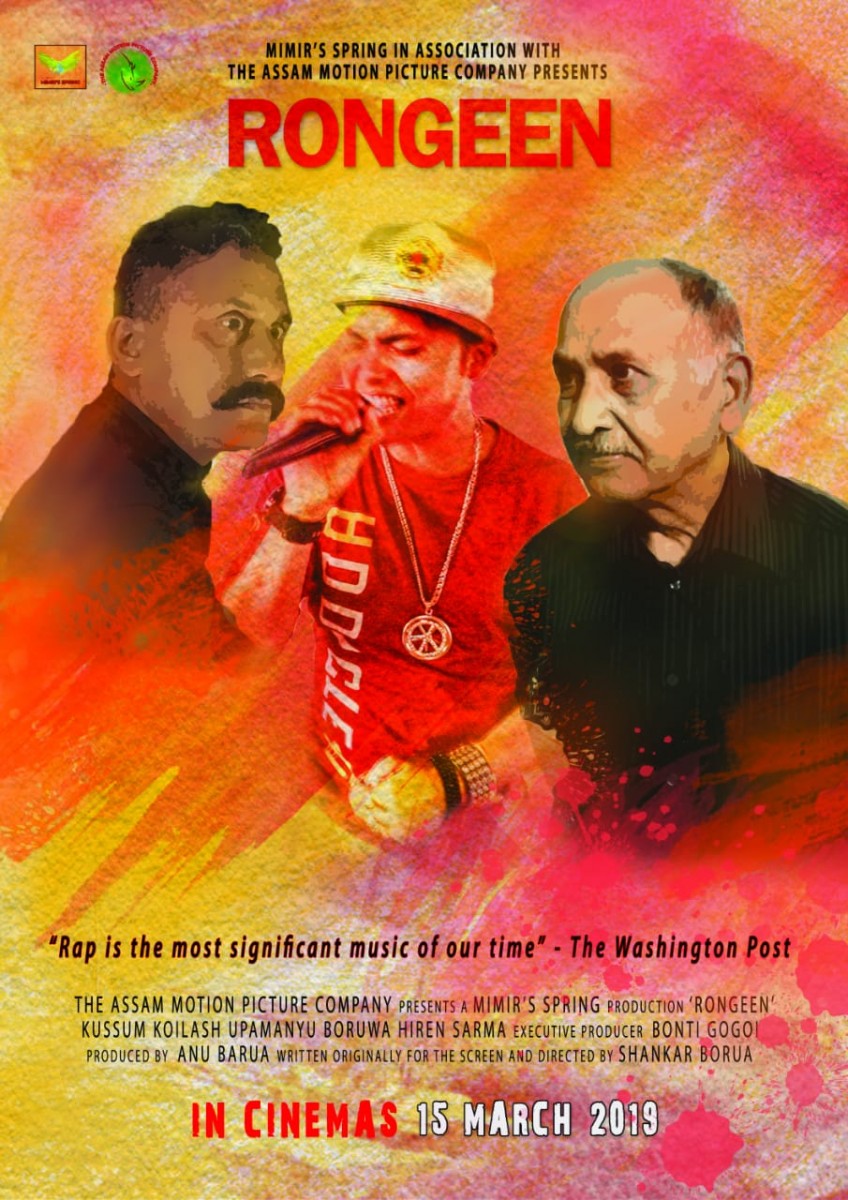 The poster for the film.

Eventually, we connected, hailing from neighbouring towns – Kusumari and Duliajan. Eight of his songs have been used in the film; they critique the electoral campaign, among other social problems.

How long did it take to shoot this film?

Rongeen took about 28 days to shoot, on a completely independent budget. I play Dambaro Borbora, and I am myself a non-actor amidst many non-actors that I have worked with. It is a rag-tag team – not very professional at the moment.  But I make do with the belief that even if I fall short on the technical front, the content may be aced. Content is king for me. Besides, non-actors carry no acting baggage. I think that has its own benefits.

What are the perils of working with this genre?

I’d say enormous. We cannot predict the reception, even in Assam. It may very well backfire due to its unusual storyline. Initially, many thought we were crazy to shoot an election using rap music for Rongeen. One of the songs describes how the rapper is interrogated about his lyrics and his art. This is very different from the kind of popularity that Kussum saw as a Youtube sensation.

As a worshipper of pop-art and culture, I feel subversion is crucial to rap music. Rongeen is an attempt to take poetry and rhythm back to its protest roots.

Given the wave of cringe rap in Assamese, do you expect an aversion to this form?

These are the risks one takes, yes. After a long time, rap is treading into serious political territory. To convince movie-goers with protest music would be tough – though it’s not an incomprehensible film. To introduce that to an international crowd is even tougher. Look at the subtitles for instance. “Maanok mati ani borpira parili, nijor manuhore thait ghor nuhua korili” cannot be translated – it needs transcreation and detailed paraphrasing. How should we convey that the Burmese ravaged us to ruins – that too in seven seconds? So rap is relying on these factors as well in this film. There’s also the problem of writing back to the centre of power – most of the local mythology gets lost when words like ‘Konxobodh’ (defeating Kangsha, Krishna’s maternal uncle in a Bhaona tradition) are translated.

Is the vernacular chosen for rapping drawn from parts of Duliajan, your hometown?

It’s an Upper Assam film. Hence, the linguistic flavour will perhaps be authentic upto Bokaghat. Having said that, it won’t be alienating to the rest of the state. Kussum has been rapping for some time in Moran and other parts of Assam. Tongue-twisters are the best part of the colloquial flavour, which I tried my best to retain. Terms like ‘Khai paat phola’, to give you an example. Moreover, it was a rare experiment to insert the song-making process within the song itself.

Do you perceive any dangers to political rap at a time when artists are being hounded?

Luckily, not a single frame was cut for Rongeen. But yes, why is politically-overt cinema in Assam so rare? I believe dissent is one of the prime movers of democracy and art. Recently, a couple of mainstream political films were released. I see that as a positive sign, as the floodgates to all kinds of political narratives have been opened. Cinematic expression must continue to create healthy criticism and scepticism.

Rongeen is in the public domain now. I’m the messenger and I am no longer important. Protest is inbuilt in art and in every frame of the film. Making Rongeen is a political act. It is imperative to create these spaces, I feel, however miniscule.

Rini Barman is a Guwahati-based writer and researcher.