'Rocketry: The Nambi Effect' | A Promising Biopic That Inevitably Becomes a Hagiography

In prioritising the story over the plot, Madhavan's 'Rocketry' slips up. 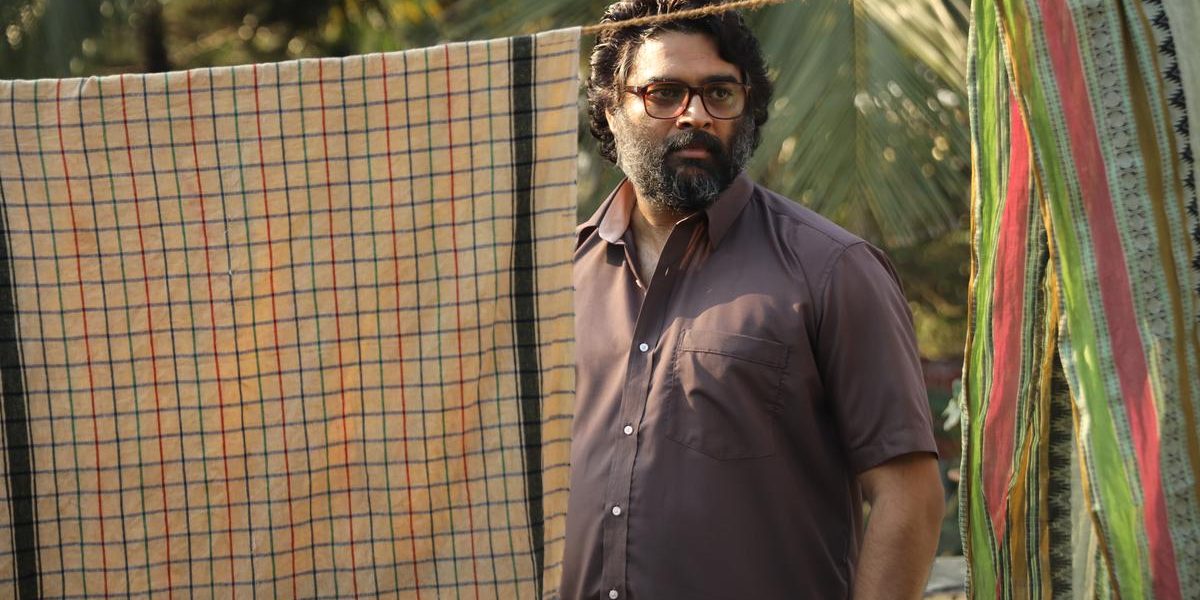 It’s the kind of difference that’s essential to a biopic. Because the one that just tells a story resembles a Wikipedia entry. The one that examines a person’s life – finding grains of causality in the heaps of events – qualifies as a biopic. That, though, is just a basic requirement – causality alone can’t make a biopic good; it needs to have other artistic merits. R. Madhavan’s directorial debut, Rocketry, based on the life of ISRO scientist Nambi Narayanan, is a convincing illustration of the fine line between a plot and a story.

It opens to his family in Trivandrum in November 1994. Its members look happy and content, bantering with each other. The day goes on – like many others, how remarkable can the life of a scientist’s family get? We find out soon. Nambi’s (Madhavan) wife, Meena (Simran), attends a local wedding. The host throws her out. His son is battered, blood oozes from his nose. The daughter’s face is smeared with shit on a public road. Nambi is thrashed, handcuffed and shoved in a police van. The entire segment plays out against the backdrop of a kinetic background score – without a single word of dialogue – and this sharp ‘masala’ moviemaking heightens tension and stokes intrigue.

It then cuts to a TV interview, 19 years later in 2013, when Nambi is interviewed by Shahrukh Khan (playing himself). As they start talking, the scientist recounts his life, beginning from the beginning: ISRO, 1969. We meet a young Nambi, working under Vikram Sarabhai (Rajit Kapur), who gets a scholarship to study at Princeton University. Recent Indian biopics have trained us to look for clues – or inflection points – that reveal the film’s true intent. They pop up in various forms: a disdain for facts (science biopics), an inspirational angle (sports biopics), a patriotic – many times, a jingoistic – lunge (almost all biopics), and so on.

But Rocketry’s initial segment doesn’t play as straight. Apart from a scene in a Princeton class, where Nambi points out the typo in a textbook and then gets derided by the professor (who calls him “Numbi”), the movie doesn’t suffer from pitiable insecurity so common to the subgenre. Even when Nambi proves the professor wrong later (of course), that scene is more funny than bitter.

I kept looking for ‘villains’, too – among Nambi’s renowned supervisor, Luigi Crocco (Vincent Riotta); Princeton peer, Yuri; NASA colleague, Barry Amaldev (Sriram Parthasarathy) — but didn’t find any. On the contrary, these portions have enough humour, some of it self-deprecatory. Crocco, caring for his ailing wife, has no time to take on new students. Nambi says that he can double up as the house’s caretaker: cooking, cleaning, caring (“We Indians are good at that, sir”). Sometimes the opportunity to be ‘patriotic’ appears quite explicitly, such as in the scene where Nambi meets the CEO of Rolls Royce, Colonel Cleaver (Ron Donachie), requesting him to donate technology worth 400 million pounds. Once serving the British Raj in Bombay, Cleaver is wrecked with “imperial guilt”. The entire exchange could have gone wrong in different ways – appearing as patronising or rude or overcompensating – but its tone is perfect.

If Madhavan the screenwriter, navigating uncharted waters, is assured, then Madhavan the actor, enjoying his old terrain, is in fine form. He walks such a thin line: His Nambi is a compelling, at times a seemingly contradictory, mix of stubbornness and charm, ambition and humility. No scene is icy enough that Madhavan’s warm gentle smile can’t melt it. And then you spot the first chink; it comes via the death of his colleague’s three-year-old son. Nambi gets a call about it; he and his colleague Unni (Sam Mohan), and dozens of ISRO scientists, are working to produce India’s first liquid engine in a lab in France. Unni is so important to this project that if he leaves it midway, it won’t materialise. Nambi hides this news from him (rationalising to himself that by the time Unni reaches India, it’d be too late for the last rites anyway). Not just that: Nambi never informs him, even accompanying Unni to buy a teddy bear for his son.

That was the first time I thought, ‘Who is Nambi?’ Did he face any moral dilemma doing something so callous? Or maybe he wasn’t callous – maybe he was just helpless. Regardless, Nambi’s internal tussles are crucial to understand him as a person. But we have no access to his thoughts. The movie simply treats it as just another event, prioritising story over plot. A similar scene happens earlier in the film, when Nambi is offered a plush position at NASA – the pay is so high that his monthly salary is equivalent to his father’s five years’ earnings. The movie leads us to believe that Nambi will accept the offer: He and Meena enjoy the US; the work is challenging; the NASA people respect him. We even get a small interview (all quite dramatic – fairly enjoyable), and then cut to: Nambi in ISRO. Again, absolutely no idea what made him reject the offer. (You can guess – ‘patriotism’ – but Nambi resolving this dilemma would have opened him up for the first time.)

Rocketry settles into this pattern: one event, then another event, and so on. It also suffers from a distinct lack of conflict and a sense of the big picture. The movie details his scientific achievements in heaps: He first moves from studying solid to liquid fuels, then obsesses over the country’s first liquid engine, then a cryogenic engine. It gets quite ‘jargon-ey’ at times – we constantly hear such things as “Viking Engine’s upper stability margin is less”, “Russia is in the violation of MTCR” – and the writing doesn’t convince us enough of Nambi’s ultimate goal as a scientist. To contextualise his importance, it resorts to sloppy exposition in the climax, explaining why this or that achievement elevated the Indian space programme.

Several random subplots appear in the film because they either illuminate Nambi’s feats or look ‘cinematic’. As if that wasn’t enough, one of his colleagues recounts them for our benefit towards the end of the movie. This isn’t filmmaking; this is Wikipediafication – that too not rigorous. Nambi’s arrest on the false charges of espionage, for example, has less information on the police’s modus operandi than the one provided on the scientist’s actual Wikipedia page. And it’s not because Rocketry is a slim slick piece; it runs for 157 minutes with enough ‘first draft’ flab. The film doesn’t even care to answer some of the questions it raises. When Nambi was jailed for 50 days, just one person from ISRO came to visit him. Again, no idea why. It’s all the more bizarre because Nambi did have a few friends, and he continues to be friendly with them after he’s released.

In its last stretch, though, Rocketry simply gives up, becoming a full-blown hagiography: the scientist appears as himself for quite some time; we then (of course) hear the voice of Modi, then we see Him in a medium shot. And that is the main problem: not every story can be a compelling plot. But Indian biopics have escaped such considerations, as they mostly care for their protagonists’ ‘significance’. And the makers think that that significance – extrapolated to a few stale ideas – will sail them through. Rocketry doesn’t just lack causality – it’s also a casual film. If that isn’t disrespect – heightened by the veneer of deification – then I don’t know what is.