Poets often specialise in one genre, but Shailendra’s sheer diversity made him unique. 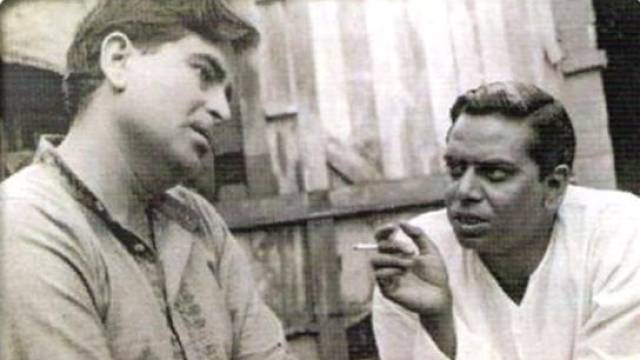 Anyone growing up in India in the 1950s and 1960s, in fact, anyone living in India even today would most certainly have heard one or more of Shailendra’s songs. Writer of numerous hits, many of his songs have become anthems of modern India. ‘Awara hoon’ and ‘Mera jooota hai Japani’ are perhaps the most recognisable Hindi songs of all time, not just in India, but the world over. His name is associated with most of the big hits of the of the ‘50s and the ‘60s.

His easy to understand, catchy and folksy lyrics made Shailendra an instant success in big bad Bollywood, from his very first film song ‘Barsaat mein humse mile tum’. Films and film music were the only pan Indian cultural thread then. Cinema had not reached the interiors of India, but due to the radio’s popularity, millions of people hummed his songs, even if they may not have been aware of the writer’s name.

Shailendra’s forte was his ability to write songs which were easy to sing, but had a hook which led you to a deeper meaning. The finesse with which he could switch from the philosophical to the trivial is extraordinary. His songs talk about nature, childhood, romance, melancholy, pain, love, optimism, spirituality and occasionally with humour and irony – his diversity is unmatched even today. (This makes him, for me, the best film lyricist of all time.)

Many of his contemporaries also have hits that have eternal appeal, but if you were to compile a list of Hindi film song favourites between 1948 and 1966, Shailendra’s songs will perhaps find the most mentions.

Shailendra was born in Rawalpindi (now in Pakistan) to a poor family. He had a tough childhood, which he spent in Mathura, where his family had migrated to. It is not widely known that he was a Dalit (he never ever talked about his caste). He was a good student and started writing poetry at a young age. His familarity with UP folk and mythological traditions and his love for literature aided him throughout his career.

In 1947, he got a job as a welding apprentice in Central Railways and was transferred to Mumbai. While he worked at the Matunga Railway Workshop, he started attending mushairas and kavi sammelans. Around this time, the Indian Peoples Theatre Association(IPTA) became active in the city and Shailendra became a member. It was at the IPTA that he befriended composer Salil Chowdhary, a friendship which would last a lifetime; they collaborated for many films and also recorded a couple of songs for the IPTA.

However, like Sadat Hasan Manto, he was never considered a part of the Progressive Writers Group. Shailendra in his early years had left leanings, and much of his literary output and some of his film songs had a socialist theme that was so popular in post-independent India.

Around the same time, his poem ‘Jalta hai Punjab’ on the Partition had become quite popular in literary circles. Raj Kapoor heard him recite this poem at an IPTA function. Kapoor was planning his first directorial film Aag and thought that the poem would be ideal. He offered to buy the rights from Shailendra for a princely sum of Rs 500. The poet in his idealism refused.

A few months later, in a state of financial emergency, Shailendra remembered Kapoor’s offer. He went to the film maker and said he was willing to write for him. Kapoor, who was shooting Barsaat, asked the poet to write two songs. ‘Barsat mein humse mile tum’ and ‘Tirchi nazar hai’ were the result. The songs and the film were both a hit. An enduring and rewarding relationship developed between Raj Kapoor, Shankar-Jaikishan, Shailendra and another struggling poet, Hasrat Jaipuri. Shailendra would write some of RK Films’s most iconic songs, until his untimely death in 1966. Raj Kapoor would affectionately call him Kaviraj and Pushkin. 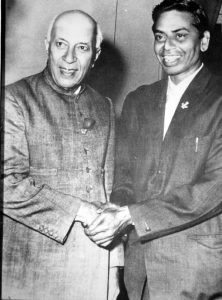 In a career spanning 17 years, Shailendra wrote about 900 songs. He worked the most with Shankar-Jaikishan (over 400 songs in about 70 films), followed by Salil Chowdhary, S.D. Burman and Roshan, though he also collaborated with veterans like Anil Biswas and youngsters like R.D. Burman. He wrote the dialogues for Bimal Roy’s Prem Patra. Many of his contemporaries told me that he had a good grasp over filmmaking, as well as of music, which may have helped him compose his songs.

When you talk of Shailendra, it is impossible to slot him into a genre, a style, a mood or philosophy. On the face of it, Shailendra’s lyrics are simple. You don’t need to dive for the dictionary every now and then to search for the meaning of his words. Simplicity is his hallmark.

But is that all there is to his poetry? Far from it. Those seemingly simple lines are layered with meaning, with purpose and with the deepest thoughts, feelings, emotions memories and dreams.

When I began my professional association with movies in the late sixties, a few of my icons had already passed on: Mehboob Khan, Bimal Roy, Guru Dutt and my favourite lyricist Shailendra among them. It was much later, after writing a couple of hundred songs myself and seriously listening to film music that I realised Shailendra was much more than a mere lyricist – he was a balladeer of Hindi Cinema.

Although other contemporaries like Majrooh, Sahir, Kaifi, Shakeel, Jan Nisar Akhtar were regarded as poets who drifted from literature to film songs, Shailendra was generally thought primarily as a lyricist. Besides, Urdu writers dominated the language of films. A few Hindi poets like Gopal Singh Nepali, Pradeep, Bharat Vyas had ventured into lyric writing, but most of the top writers were Urdu poets (though some of them went on to write some memorable songs in chaste Hindi, such as Sahir Ludhianvi in Chitralekha).

Urdu poetry has a definite structure based on a fixed behar (meter) and kafiya (rhyme) and is limited to 19 such patterns. Hindi (derived from Sanskrit) has a wider range of over sixty rhythmic meters. Shailendra was the first to combine the two distinct patterns.

Shailendra was not a lesser poet than any of his contemporaries either in Hindi or Urdu. However, his film repertoire unfortunately always overshadowed his literary output. Shailendra wrote several outstanding poems. Read this, written in 1945.

Or some of the songs he wrote as a member of IPTA in the forties.

Over the years, everyone I have spoken to about Shaiendra – S.D. Burman, Lata Mangeshkar, Kishore Kumar, Vijay Anand, Majrooh Sutltanpuri, Gulzar or Javed Akhtar – spoke of him with great respect and fondness.

I was told about an incident from 1964, when a Filmfare award for best lyricsist went to Sahir for the song ‘Jo wada kiya wo’ from Taj Mahal. Ludhianvi went up to the stage and announced that the true winner of the award ought to be Shailendra for the song ‘Mat ro mata’ from Bandini, which Sahir termed as the best patriotic song he had ever heard. He called a reticent Shailendra to the stage and handed him his trophy.

Also Read: How the Partition Saga ‘Buniyaad’ Captured the Imagination of the Entire Nation

His son Shaily Shailendra (also a popular lyricist in the 70s and 80s) became a friend of mine in 1972 and I visited the poet’s home, Rim Jhim, in Khar a few times. I met his wife, three sons and two daughters. One could see the values ingrained in them by the late poet – humility and grace. His youngest son Dinesh is a filmmaker now.

Shailendra turned a producer in 1963 and launched Teesri Kasam directed by debutante Basu Bhattacharya, who was Bimal Roy’s assistant and Shailendra’s close friend, starring Raj Kapoor and Waheeda Rehman. The film was inordinately delayed and the poet was suddenly under a cloud of debt. Though the film won a National Award, it was only after he passed away. He was disconsolate at the problems of producing a film. His legacy is immortal – as he said in his famous song from Do Beegha Zameen, ‘Apni kahani chhod ja, kuch toh nishani chod ja’.

Its very difficult to curate a list of my favourite Shailendra songs. It is too long. I present it in no order of preference.

Amit Khanna is a filmmaker, lyricist, poet, writer and journalist. A core member of Dev Anand’s Navketan Films production house, he served as executive producer of seven Hindi movies produced under its banner in the 1970s and 1980s.