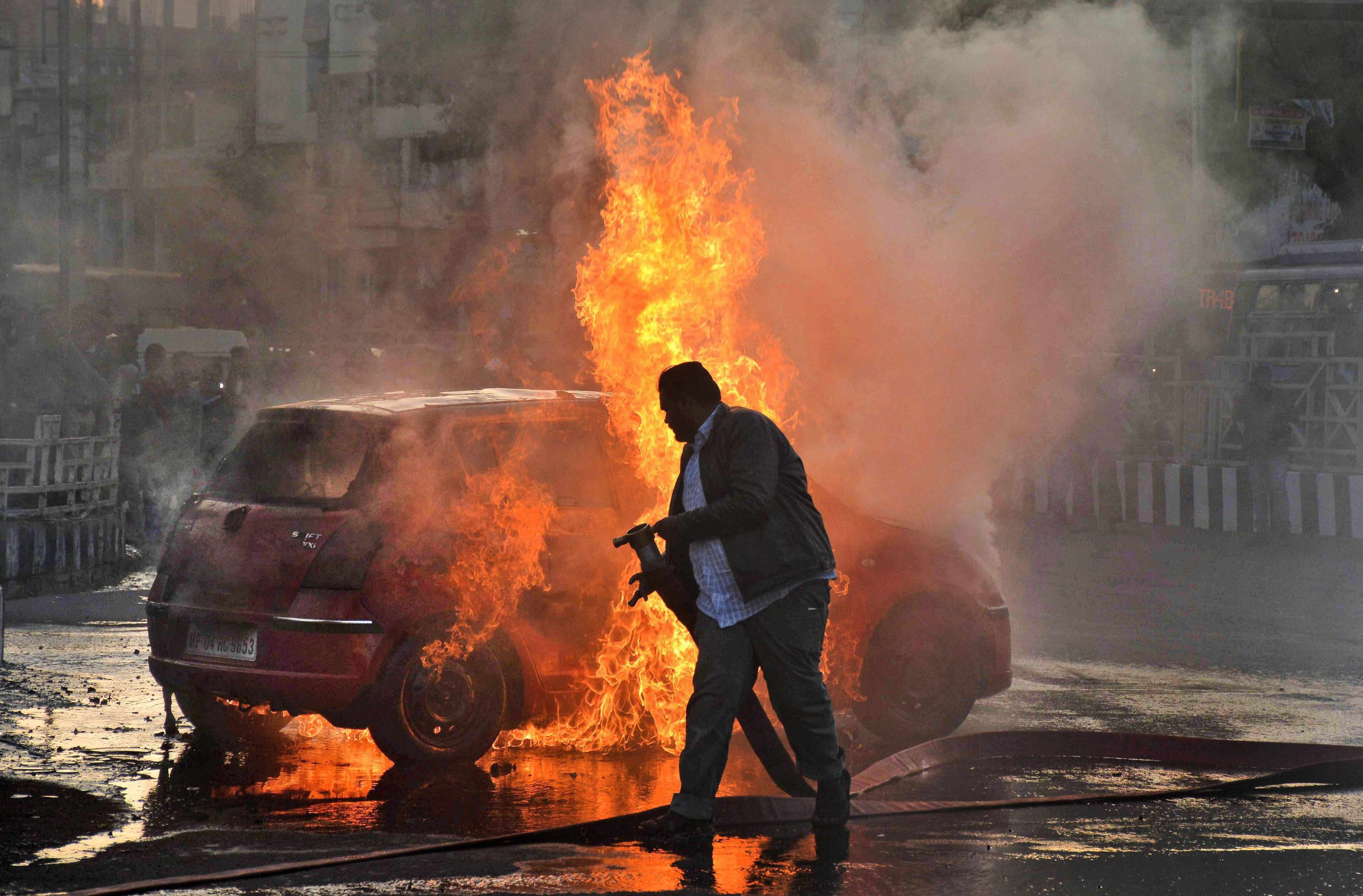 A firefighter tries to douse flames after Karni Sena activists torched a car during a demonstration against the release of 'Padmaavat'. Credit: PTI

If the rule of law prevails over censorship by mob, Sanjay Leela Bhansali’s latest film, renamed Padmaavat at the suggestion of the Central Board of Film Certification (CBFC), will be released as scheduled, at least in some parts of the country, just a couple of days short of a year after the director was attacked and the film set at a fort in Rajasthan vandalised by members of the Shree Rajput Karni Sena.

The manufactured furore over a movie based on a poem about a medieval queen, who may or may not have existed, recalls a far more serious occasion in the past when the Rajput community rose up to aggressively defend and glorify women’s right (or duty?) to kill themselves in the wake of their husbands’ deaths. There are several significant similarities and a few noteworthy differences between the two controversies separated by three decades.

Roop Kanwar was only 18 years old when her husband, Maal Singh, died in September 1987. She had spent just 20 days of her eight-month marriage with him in his village, Deorala – immediately after the wedding and just before his death. She may have preferred to live with her natal family in Jaipur because her husband was suffering from and had been in treatment for depression (his mother was also reportedly afflicted by mental illness).

Despite their brief relationship and separate lives, not to mention the fact that she had studied up to the tenth standard, she is supposed to have independently decided to commit ‘sati’, choosing to burn herself alive on her husband’s funeral pyre. Yet, some accounts of what happened on September 4, 1987, recorded in a report (Trial by Fire) by a team of journalists who went to Deorala later that month to investigate the tragedy, suggest that the decision was not hers, that she cried out for help and that young Rajput men brandishing swords who surrounded her throughout, made escape impossible. It is also significant that Roop Kanwar’s parents, who lived in Jaipur (just two hours away from Deorala), were not informed about Maal Singh’s death or their daughter’s alleged decision to kill herself; the family found out about the ‘sati’ through local newspaper reports the next day. 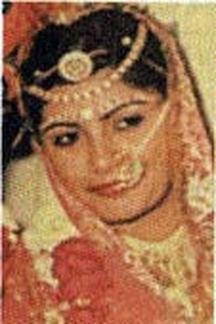 It is probably not a coincidence that the founder leader of the Shree Rajput Karni Sena, which is leading the charge against Bhansali’s film, is Lokendra Singh Kalvi, son of the late Kalyan Singh Kalvi, the most prominent among the several politicians who were members of the Sati Dharam Raksha Samiti. The Samiti was established in the aftermath of Roop Kanwar’s death to resist what was perceived as interference in the cultural identity and religious practices of Rajputs.

It was only in November 1987 – two-and-a-half months after the controversy began – that Kalvi senior, then state president of the Janata Party, finally gave in to pressure and retracted his defence of ‘voluntary sati’ and associated rituals. He went on to become a Union minister in the short-lived Janata Dal (S) government led by Chandra Shekhar. His 62-year-old son has evidently not been as successful in politics; Karni Sena agitations have been his passport to fame (or notoriety).

The relative silence of the political class on the controversy over the movie is reminiscent of the reluctance by politicians across much of the political spectrum to speak out about Roop Kanwar’s gruesome death and attempts by others to glorify and profit from it. The present chief minister, Vasundhara Raje of the Bharatiya Janata Party, may be actively opposing the release of Bhansali’s film, at least in her state; but women activists who met the then chief minister, Harideo Joshi (heading a Congress government), two days after Roop Kanwar’s death found him indifferent and dismissive. Congress leaders at the helm of the then central government were no better, observing an inexcusably long silence before weakly reacting to the furore. In fact, as I observed in a 1991 article on political parties and ‘sati’, most non-Left parties of the time had pro-‘sati’ skeletons in their cupboards.

A firefighter tries to douse flames after Karni Sena activists torched a car during a demonstration against the release of ‘Padmaavat’ in Bhopal on Wednesday. Credit: PTI

It is also a fact that then, as now, Rajputs were quite confident that political parties would not wish to antagonise them, mainly for electoral reasons but also because of the community’s representation in the military. In 1987, a high court advocate in Rajasthan, quoted in Trial by Fire, put it quite bluntly: if the government does so, “they will turn 80 per cent of the country’s armed forces against them”. Recently, a Karni Sena leader urged soldiers of Rajput, Sikh and Jat regiments not to pick up arms for a day in protest against Bhansali’s film.

Both then and now, the judiciary and the media have been strongly criticised by the pro-‘sati’ and anti-Padmaavat brigades for their respective roles in the controversies. But in 1987, the fiercest criticism was reserved for women activists in Rajasthan who led the fight against the revival of ‘sati’.

Making disparaging remarks about women is, of course, par for the course. In 1987, BJP leader in Rajasthan, Om Prakash Gupta, referred to women activists as ‘bazaari auratein’ who were unmarried and would remain so: “How could these women know about ‘pativrata‘ or the desire to commit ‘sati’?” The activists were also described as “women with no respect for the Hindu religion, with Western ideologies and loose morals who frequented clubs, drank,” etc. More recently, a BJP parliamentarian from Madhya Pradesh attracted criticism for asking, “How come filmmakers whose women family members change their husbands every day can understand jauhar?”

Also read: What Gulzar’s ‘Meera’ Has to Say to Those Opposing ‘Padmavati’

Of course, some women too have embraced pro-‘sati’ and anti-Padmaavat positions. At least 200 Rajput women marched with swords in Chittorgarh town for a ‘swabhimaan’ rally, saying that they would be forced to kill themselves en masse if the film was not banned. Members of the fact-finding team of women journalists who went to Deorala in 1987 were gheraoed by some women in the village who were convinced that they seen them on TV participating in demonstrations protesting against Roop Kanwar’s death.

The failure of governance in general and the ineffectiveness of law enforcement in particular comprise another common thread. In 1987, despite a court order stating that “the state government must ensure that no public function is held which may have the effect of glorifying the institution of sati”, the chunri mahotsav was observed two days later on a large and lavish scale, beginning two hours ahead of schedule to pre-empt possible police action. As women activists had then pointed out, the ban order could have been easily implemented by imposing Section 144 of the Criminal Procedure Code in the area and sealing entry and exit points in the village.

A crucial difference is that 30 years ago the militant, sword-wielding putative protectors of Rajput identity, heritage and rights did not engage in mob violence. Times have clearly changed. There have been several instances of such violence by anti-Padmaavat goons over the past year, most recently the torching of dozens of vehicles and the vandalising of theatres and shops in two malls in Ahmedabad, and the stoning of a school bus carrying children. Yet the violence and threats of violence (including death threats against the director and lead female actor of the film) have not been strongly condemned by individuals in positions of power and authority, nor is there evidence of a genuine, effective crackdown on the perpetrators.

Meanwhile, early reviews of Padmaavat suggest that the Shree Rajput Karni Sena got it all wrong: the film appears to be completely in line with their prejudices, values and notions of valour. What a waste of time, energy and resources.

Ammu Joseph is a senior journalist based in Bangalore.