'Raazi' Explores the Struggles of Being a Spy

The period thriller raises an important question: Is national duty bigger – and better – than personal compassion? A still from 'Raazi'.

Meghna Gulzar’s Raazi, a spy thriller starring Alia Bhatt, contains at its core an unlikely comment — perhaps an in-joke even — on marriage. How different is marriage, especially an arranged marriage, from spying? After all, both are new life situations marked by unfamiliar people and milieu. Both demand transformation of identities. Both are united in their pursuits and ends: of uncovering and protecting secrets. The nudge-wink part about Raazi is that, in this thriller, spying and marriage not just mirror each other – thematically – but also complete each other, literally.

Early in the film, 20-year-old Sehmat (Bhatt), a student in Delhi University, is called home and explained the precise ways in which her life has changed – and will continue to change. Her father, Hidayat (Rajit Kapoor), suffering from a malignant tumour, will not live beyond a few months. Hidayat, a Kashmiri, is an informer to the Pakistani army, but he considers himself Indian and is deeply loyal to his country. The year is 1971; India and West Pakistan may soon fight a war. Hidayat wants Sehmat to do what he cannot: be “India’s eyes and ears in Pakistan”. For that, she is to marry Iqbal Syed (Vicky Kaushal), a Pakistani military officer, whose father (Shishir Sharma) is the Pakistani army’s major general. Sehmat hesitates but agrees.

This is the kind of premise that sounds outlandish even for a spy thriller. But Raazi isn’t fictional; it is adapted from the 2008 novel Calling Sehmat, by Lieutenant Commander Harinder Sikka, who based it on the true story of a Kashmiri undercover spy. Life dignifies the melodrama and impossibilities of fiction, and so the same story now speaks to us differently. Gulzar is aware of this. Like most filmmakers adapting a true story, she has earned our trust by default; the challenge is to maintain it.

She does this by digging deep and not wasting our time. Small details enliven a scene, indicating a purpose, but Gulzar never belabours the point. In her first scene, for instance, Sehmat injures her feet while playing with a squirrel. She meets a friend, and the writing quickly establishes two key points: Sehmat can’t stand the sight of blood; she has a great memory. To begin with, this scene feels too neat, an obvious skirting of exposition. But the film soon references her near-photographic memory – fairly quickly in fact, in less than 15 minutes – allowing her to finally gain an upper hand over her domineering, unrelenting boss (Jaideep Ahlawat), in a scene that relishes the small victory of that exchange, showing that Raazi is not above its small pleasures.

Gulzar gets plenty of things right about genre fiction: the slow accumulation of details, the credible transition, the inevitable – but here relatively subdued – payoffs. This is most evident in the scenes where Sehmat is training to be a spy. Bhatt, whose acting wonders don’t cease to stop, turns this portion into a commentary on artistic deception, an actor paying tribute to acting. What makes Bhatt tick here – even though she has played more challenging roles in her earlier films – is her authorial stamp: gravitas and sincerity meeting curious ordinariness.

The writing (screenplay by Gulzar and Bhavani Iyer) is similarly sharp yet light, conveying reams through a line or two, developing complex relationships through seemingly simple set-ups. There’s a wonderful exchange between Sehmat and Iqbal later in the film about their musical preferences. He prefers jazz, she Hindustani classical. This scene doesn’t advance the plot but does tell us the difficulties of being a spy: the struggles of being yourself in a job that demands the complete surrender of your identity.

Given the plot’s stakes and conflict, the writing also does an impressive tightrope walk, both incorporating and reveling in, the tropes of a genre piece. When a longtime loyalist of the Syeds, Abdul (Arif Zakaria), keeps an eye on Sehmat, it initially feels like a contrived plot point, but the movie soon revels in this cat-and-mouse game, replete with a song in the background, displaying quiet confidence in its self-awareness. 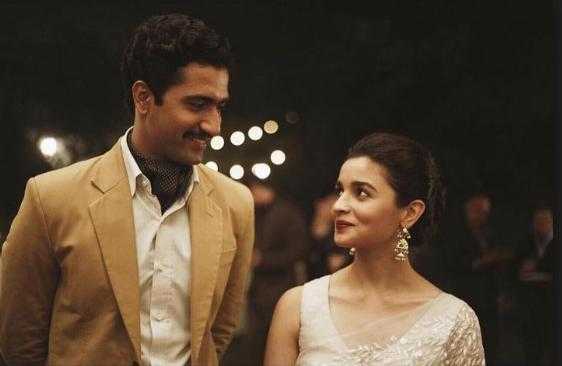 Even though a period thriller, Raazi manages to raise important and relevant questions: Is national duty bigger – and better – than personal compassion? How should we determine victories in wars: by estimating the lives saved or lives killed? Patriotism is central to Raazi. We’re told, more than once, that Sehmat will scale any danger for the sake of her country, just like her father and grandfather. Yet it doesn’t endorse rabid nationalist pride, and prompts us to see people beyond their countries.

The tussle between the two versions of Sehmat – a person trying to resist the ruthlessness of her persona – is the central conflict of Raazi, defining and disorienting her in multiple ways. But Gulzar also overestimates the reach of that motif, which repeats itself after a point.

A film like Raazi should have been bolstered by other thematic underpinnings, making it more grounded, more lasting. Even Sehmat’s loud declarations in the final few minutes seem to belong to a different and a much lesser film. Raazi isn’t aiming for a lot and comfortably crosses its finish line. It could have been more but, with numerous shoddy Bollywood productions this year, you’re thankful that it is at least not less.