'Pad Man' Could Have Been Inspirational, but Ends up Being Patronising Instead

The film needed the fine strokes of a deft artist. But filmmaker R. Balki and actor Akshay Kumar prefer the broad strokes of a novice. 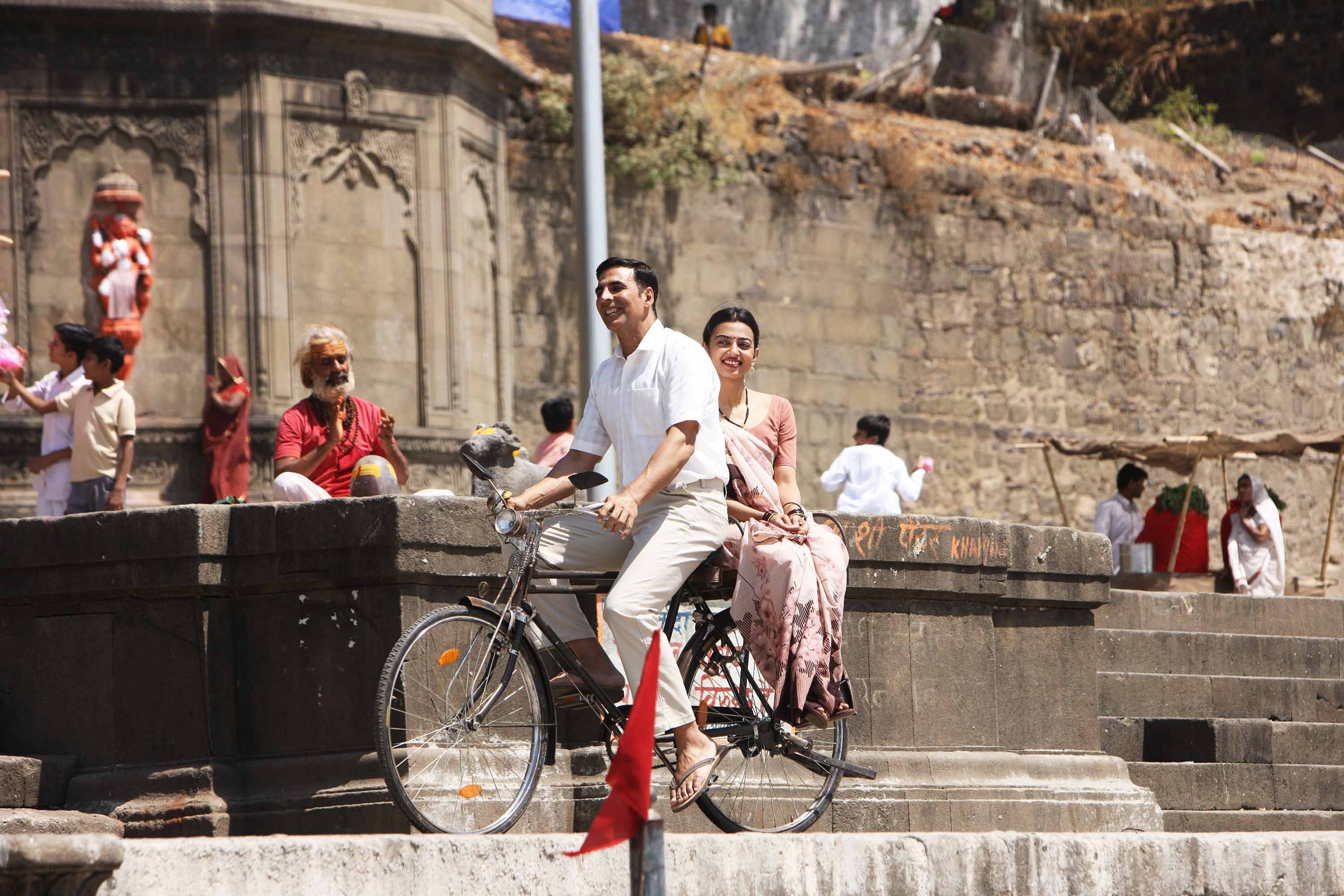 Lakshmikant Chauhan (Akshay Kumar), the protagonist of Pad Man, is a misfit. In a small Madhya Pradesh village, where people revere traditions, he’s repulsed by them. Small ‘normal’ things perplex him: his wife using a rag to wipe out menstrual stains, the exorbitantly priced sanitary pads, the isolation of women during periods.

Lakshmi is a believer, but at the same time skeptical of Hindu priests who, at a local fair, con the villagers into paying Rs 51 for a piece of coconut broken by a statue of Hanuman. Where the villagers see religion – their god opening his mouth, swallowing the coconut and ejecting several broken pieces of it from his left hand – Lakshmi sees science, imagining a small machine, comprising a pulley and a cutter, that makes the mystical real.

Lakshmi’s insights are original and penetrating – but more importantly, they are Indian. They are rooted in his milieu and people. They also don’t kowtow to conventional definitions of intelligence. Consider this: Lakshmi is a school dropout (he studied till eighth grade), can’t speak English and works as a mechanic in a garage. People like him don’t ordinarily stand a chance in this world — or rather they’re not allowed to. Yet Lakshmi spends his hours losing sleep over making an affordable sanitary pad. This would have been ingenious screenwriting had Lakshmi not been based on a real-life character, Arunachalam Muruganantham.

Western imperialism pulled off a sly trick centuries ago: it converted all its ‘a’s to ‘the’s. So, for instance, Western modernity, a form of modernity, became the form. The grip of this cultural colonisation has been so firm and unrelenting that it offers no easy way out. This thought has captivated and haunted many Indian thinkers: is being modern the same as being Western? In such a culture, where our language and definition of success is largely borrowed, Muruganantham’s story is a rare Indian artefact: it is first local, then global.

It is also what Bollywood filmmakers like to call ‘inspirational’. Over the last few years, though, inspirational has become shorthand for ‘patriotic’. And patriotic has largely come to denote one thing: an Akshay Kumar film. This was potentially worrying because Bollywood filmmakers and stars (Kumar in particular) interpret patriotism as jingoism, substituting quiet pride with loud superiority, which is fixated on spreading outwards in a bid to subjugate. But Muruganantham’s is a story of going inwards, of proving things to no one else but one’s own self.

So Pad Man often appears like a shrinking, contracting circle that doesn’t know its centre. Hindi cinema is often known to make the already dramatic overly dramatic. Which is why, early in the film, it’s not enough that Lakshmi is trying to make a sanitary pad by himself, a desire motivated by intellectual inquiry and love for his wife (Radhika Apte); that scene has to also unfold to the sound of a loud wailing flute, milking the pathos to the last drop. Such lack of confidence constantly mars Pad Man.

Then the film struggles to accommodate a star – a larger than life figure – in a village, a setting that isn’t conventionally ‘cinematic’, giving rise to an artificial mofussil: scenes shot in bright fairs, on the riverfront, around imposing temples. A film like Pad Man, where love and science co-exist (and, unlike many Bollywood and Hollywood dramas, where the former doesn’t edge out the latter), is uncommon to Hindi cinema, and it needed the fine strokes of a deft artist. But filmmaker R. Balki and Kumar prefer the broad strokes of a novice.

Yet the film, by virtue of a powerful story and the makers being faithful to it, shines in parts. Pad Man is, to some degree, an examination of obsession. Lakshmi’s fascination for sanitary pads, considered both taboo and feminine, first makes him an object of ridicule and later destroys his marriage and results in his ouster him from his village.

Lakshmi would like his old life back, but he’s also fallen for the seductions of invention, ultimately finding who he is – aware of pain, restless about answers – and there’s no going back. As much as Lakshmi loves his wife, when he calls her years later, after having designed a machine for making cheap pads, he keeps talking about his invention and doesn’t ask about her. She is distraught. But that is how people obsessed with work can express love: through work.

Like Kumar’s Toilet, an ambitious drama that eventually devolved into a quasi-propaganda piece, Pad Man too is devoid of a villain. The implication of this is powerful – that our traditions, or rather a blind devotion to them, are holding us back. Besides, using Muruganantham’s life as a springboard, Pad Man dismantles many key Indian misconceptions, such as a false equivalence between intelligence and education, the insistence on following a strict path to become successful and money being the only yardstick to measure success.

Some motifs are hammered in, but some are just acknowledged through a line or two, such as when Lakshmi says in the film’s climax, at a speech in United Nations, “I not study IIT but IIT study me.” Pad Man also probes the definition of a ‘man’ and how he should act. In the village, Lakshmi’s repeatedly told to “not interfere in the matters of women”, in the town he’s advised to become a “mard (man)” not a “murkh (stupid)”, to get a well-paying job and pay for his wife’s sanitary pads, instead of fixating on creating something – advice that comes naturally to many Indian parents and uncles.

That said, Pad Man, while posturing as a feminist drama, also has the tendency to be paternalistic and patronising. Given that the film unfolds through a man’s point of view, its hero is less of a regular person, trying to devise a method to solve a personal problem, and more of a ‘saviour’, someone who will liberate lakhs of Indian women. Even elsewhere, narcissistic men expect a pat on their backs for merely fulfilling their duties.

At one point, we see Rhea (Sonam Kapoor), a management student who later helps Lakshmi, in her house in Delhi. Her father is cooking lunch for her, while she lounges in the kitchen. It’s a nice sweet scene, and we get the message. Yet a few scenes later, we see that man showing Rhea’s childhood pictures to Lakshmi, telling him how he learnt cooking for her, brought her up all by himself, topping his litany of virtues with a line that makes you want to disappear in your seat: “Mard hone ka mazaa apne andar ki aurat ko jaga ke hi aata hai (You can only enjoy the sense of being a man by invoking the woman in you).” It’s moments like these, and there are plenty throughout the film, that make you suspicious of Pad Man’s intentions.

Besides, the original writing in the film, when taking creative license to veer from Muruganantham’s life, is quite pedestrian. Things happen too easily. Lakshmi battles no self-doubt, faces nothing but trivial obstacles – at any rate, nothing that can’t be solved during the course of an Amit Trivedi song – while designing his machine. The sequences of events overlap a little too neatly (Lakshmi finds out that he can apply for a social development award at IIT Delhi, worth Rs 2 lakh, at the same time a moneylender shows up at his garage demanding Rs 90,000).

The film has absolutely no sense of time, making 18 years look like 18 months. The hyperbole is constant (Lakshmi’s pad is called, more than once, “Aladdin ka chirag”); some elements that try to spice-up the drama are simply silly. Pad Man benefits a lot from Muruganantham; it is unfortunate, but not altogether surprising, that that relationship isn’t symbiotic.