Ninety Years on, Fritz Lang's Dystopic 'Metropolis' Still Has the Power to Unnerve

What do films produced during the run up to Nazi rule say about the mood in Germany at the time? 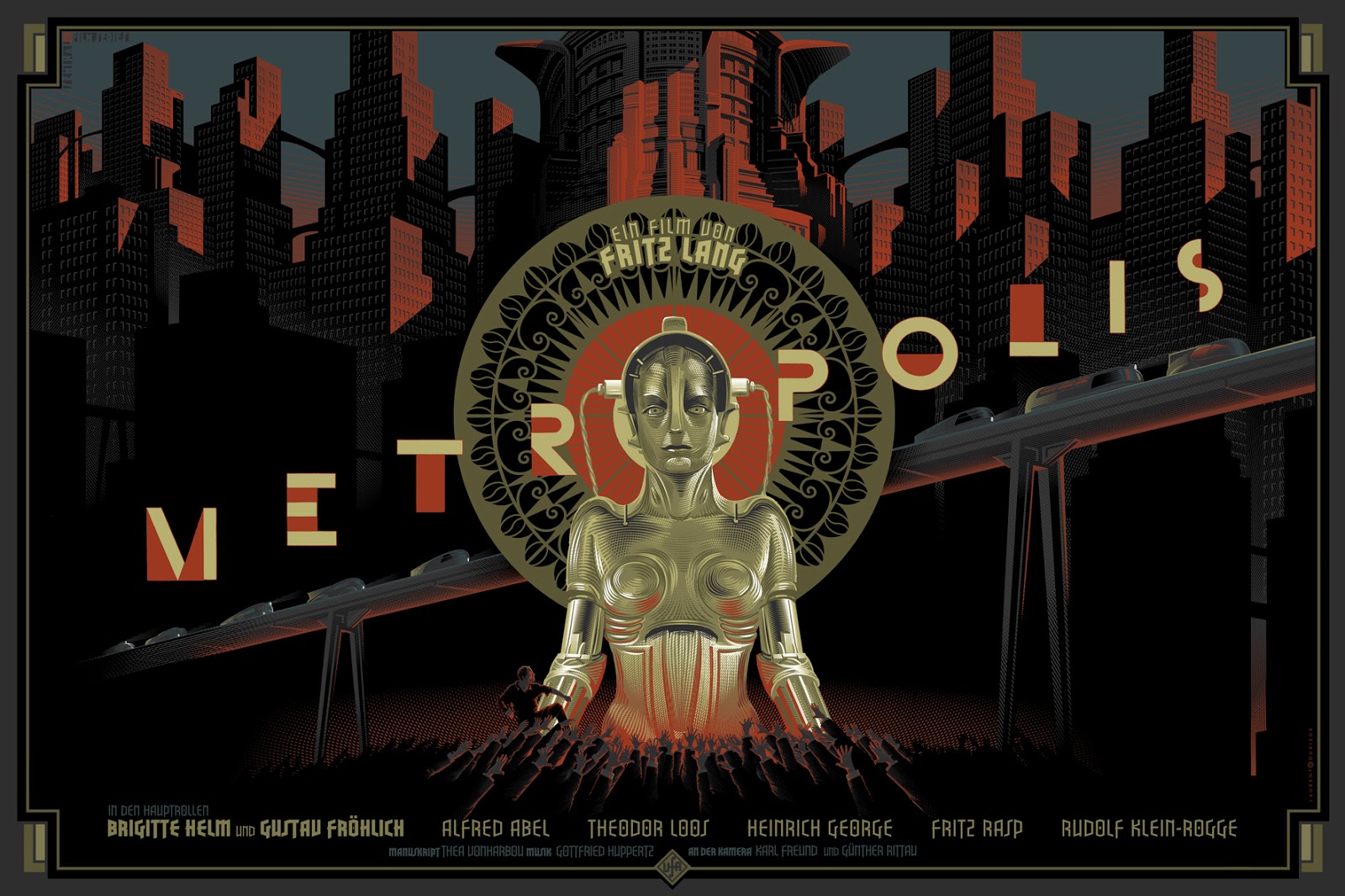 In the mid-1920s, when Nazi ideology was spreading all over Germany, cinema in the country was going through an extraordinary period of creativity. The great studios, such as UFA and Babelsberg, produced films that are considered classics. The genre we now know as German Expressionism was born around then and gave us films such as Dr Mabuse, M, The Cabinet of Dr Caligari and the world’s first sci-fi film, Metropolis.

Metropolis was released in Berlin on this day 90 years ago. It has since come to be admired and reviled in equal proportion. Its initial reception too was mixed – there are reports of some people applauding it and others booing it. The film was accused of pushing the communist line, but at the same time was much admired by Joseph Goebbels, Adolf Hitler’s minister for propaganda. The director Fritz Lang later came to dislike it, not the least because of what he felt were Nazi messages that had sneaked in.

Various versions of the film exist – the original was cut by the studio after release and the Lang version has never been restored – but nine decades on, Metropolis continues to fascinate us. To a contemporary audience, it will naturally appear old fashioned, but it still has compelling power to shake up the viewer. Seeing it 90 years on, it is difficult not to look at it through the prism of historical events of the time and see the incipient echo of rising fascism. The Nazi establishment loved the film; they were fully aware of the power of cinema – Goebbels later offered a job to Lang, which led to him escaping Germany the very next day.

On the face of it, Metropolis is a straight forward film about a dystopian society and the class divide. Set in 2026, it shows the wealthy – the forces of capital –living luxuriously in their high-rises while the poor toil underground to keep the machines running. A rich man’s son crosses over to the workers and seeing their abject condition, decides to help them. A mad scientist, who has created a robot fashioned after his lady love, harbours a secret plan to bring down the industrial empire.

After much trials, tribulations and misunderstandings, the son finally reconciles the capitalists and the workers. The mediator between the head and the hand should be the heart, says the film, imparting a message of optimism. This story could have gone in any direction, but Thea von Harbou, Lang’s then wife and scriptwriter, nudged it towards Nazi ideology rather than communism. This was no clarion call for revolution – this was about all sections of society working for a harmonious society.

What set Metropolis apart was the scale and the ambition of the production. Not just the sets – of looming towers (said to have been inspired by Lang’s visit to New York), of the machines, the laboratories and of Hel, the female robot – which were all grand, but the filming itself, that was done with great style and audacity, was designed to impress and awe the viewer. The boiler room, where the machines run, is massive, billowing steam and continuously running, as if to emphasise the monotony of the workers’ existence. Notice carefully and the machine takes on the form of a wide open, monstrous face, like a gigantic evil demon presiding over the robotic activity. In a supreme twist of irony, it is called the Heart Machine. It all adds to the sinister, brooding ambience of the film. The industrialist’s office is a huge room, with high ceilings and an imposing door, where those who want to meet him appear tiny and remote. The power equation is thus clearly established.

By the time he made Metropolis, Lang was already a famous and established director. He had made Dr Mabuse the Gambler and two films based on the Niebelungen, Wagner’s classic music opera. (Lang had also written Der Indische Grabmal (The Indian Tomb), a heavily Orientalist film that he was not allowed to direct then. He made his own version in 1959.) 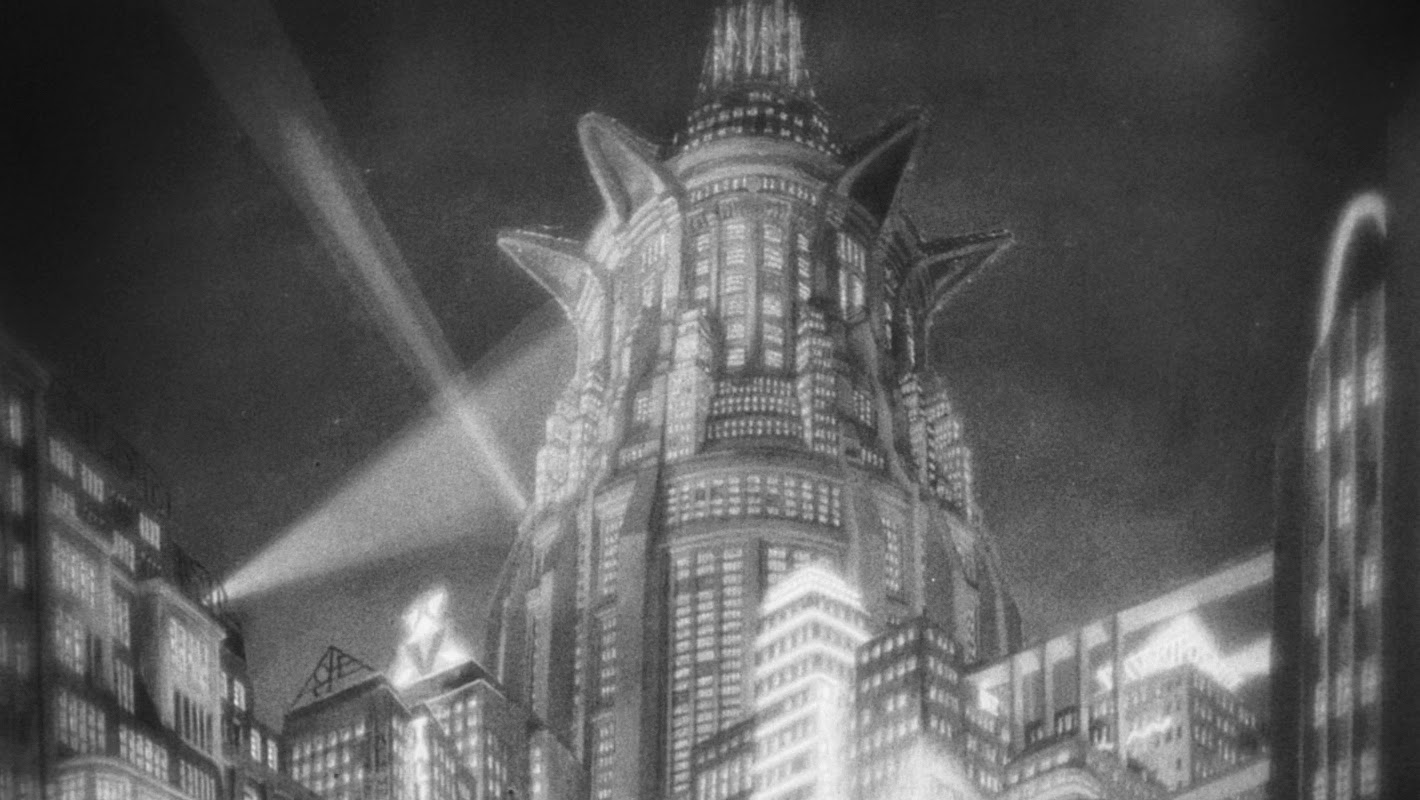 Set design of a skyscraper from the film Metropolis (1927)

Drawing heavily from the Art Deco and modernist styles, the city, as shown in the film, is meant to impress and dwarf the onlooker and the characters. The most impressive structure is the headquarters of the industrialist, which drew from the Tower of Babel, adding to the film’s Biblical sub-text, which was all the more emphasised when Maria, the girl, recounts the fable. The themes of capital, labour, fascism and communism are all effectively blended in the film, touching upon the major concerns of the time.

But, perceptive critics were quick to note that many of the themes so beloved to the Nazis had also slipped into the film. Thea von Harbou was apparently a Nazi sympathiser – they were soon divorced and she joined the party.

Siegfried Kracauer, the famous film German critic, who was part of the Frankfurt school, in his book From Caligari to Hitler offered up the theory that Metropolis actually promoted fascism. Analysing the end, in which the heart brings together the head and the hand, Kracauer said, “It seems that Freder has converted his father; in reality, the industrialist has outwitted his son.”

Kracauer had begun to notice that many popular films of the period were reflecting a particular mood – there were films about noble kings and a halcyon past but also films about malcontents and twisted personalities, such as Dr Caligari, who sent out his hypnotised slave to murder at night. Terror was in the air, as witnessed later in Lang’s own film M, about a child murderer. There were films that disturbed the mind, but also films that soothed, by recalling a mythical, perfect Germany of happy, golden haired people and often also by invoking a glorious past when good always defeated evil and there was firm moral order in place.

Were these films capturing a rising mood in the country or were they, inadvertently, preparing the citizens for what was to come? Were all the directors part of a Nazi conspiracy or were they, knowingly or unwittingly, making films that would gel with what the people wanted in the post-World War I era? Many of the directors, Lang included, fled to the US to escape the Nazis, so clearly they were not Nazi sympathisers. Yet, collectively, the films of the time had begun to reflect a societal mood. It is intriguing to speculate if social trends of a particular moment get translated into the cinema that is made at the time.

Applying that theory, what would a historian or cultural theorist in the future make of the mainstream Hindi films being made today? How will they ‘read’ a Dangal or any of the other biopics of sports stars and freedom fighters? How will they analyse the garish costume dramas about past valour of our kings and queens, the glorification of our mythical ancient past, the in your face hyper-nationalism that seems to be creeping into almost every film?

If Bhaag Milkha Bhaag, Rustom, Airlift, Neerja, Bajirao Mastani and Mohen jo Daro, to name a few, are anything to go by, India seems to want not just feel good stories but also sagas of bravery amidst odds with a generous tinge of patriotism and pseudo-nationalism. Biopics on Udham Singh, who killed the former Punjab governor O’Dwyer, and another on Rakesh Sharma, India’s first man in space, are in the offing. More often than not, the tone and treatment are triumphalist.

Films with downer themes are a no-no; the art films of yore, such as the ones Om Puri acted in, which focused on the underprivileged or the cruelty of the system, seem to have vanished. No one would dare make one, no one would be interested in seeing them. Urban themes are in, the village is out. What this tells us remains to be studied.

Films often mean different things at different times. Today, Metropolis is not just a film about Germany of the 1920s, but also an artistic and cultural artefact, a monumental breakthrough in cinema and a fine example of the Expressionist movement. Lang went to make his masterpiece M and then The Testament of Dr Mabuse before he fled to Paris and then onwards to Hollywood where he became one of the leading directors of the Film Noir movement, directing classics like The Woman in the Window and The Big Heat (and also a pulpy Orientalist film set in a mythical India, The Tiger von Eschanpur). In time he repudiated Metropolis, but the film remains a must-see for film buffs the world over.

The film can be seen online: