The individual experience of Dalit women’s lives is neither denied nor fetishized but used to see how social, economic and cultural structures produce her as an oppressed but equally argumentative subject. 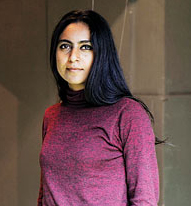 While watching the recently released Netfilx film compilation, ‘Ajeeb Daastaans’ / Strange Tales, it strikes one that  director Neeraj Ghaywan’s short – ‘Geeli Puchhi’/ Sloppy Kisses – is the only angry essay in a series that otherwise explores how love is interrupted and disfigured by sexual marginalisation, class prejudice and ableism. It stands out for its vivid and luminous rage.  We feel every beat of the film’s primary protagonist, Bharati Mondol’s repeated humiliation and torment on account of her caste, sexuality and gender. But Ghaywan’s film also gives us the rare opportunity to see her cunningly reconfigure it into an access route towards the possibilities of emancipation.

The film opens with the camera tracking Bharati as she walks across the factory floor dressed in blue overalls. Our first introduction to her is as a factory worker. Ghyawan’s mise en scene reverberates with a political charge from the very beginning. Industrial cylinders organised on the basis of colour flank Bharati as she makes her way to the assembly line. Ghaywan uses the contrast between the colours blue and brown to draw us into the tensions that are about to unfold.

Brown cylinders stand at a safe distance from the blue ones. As Bharati is shown manoeuvring a large blue cylinder, she sees the factory manager and a new employee Priya Sharma walk onto the factory floor from a distance. Interestingly, the camera frames the new entrants with a long row of brown cylinders in the foreground. Dressed in complementary tones, they become extensions of the brown – whereas Bharati and her fellow workers stay on the blue side.

Soon after, we learn that Bharati is Dalit, and from this moment on it becomes clear that the blue worn by Bharati and that which pigments most of the film is also the blue of the Ambedkarite resistance. A blue that many argue was chosen by the Dalit resistance because it represents the colour of the sky, a possible egalitarian expanse. This tension between the exploitation and containment of the blue collar worker and the prospect of her embodying the spaciousness of the anti-caste brilliant blue expanse is constantly kept alive by Ghaywan. In the course of the film, we learn that Bharati wants to move up from being a factory worker to her dream job, a data operator. Even though she has all the necessary qualifications, the job is offered instead to Priya Sharma, a naïve, under-qualified, conventionally attractive Brahmin woman. While expressing her anger and disappointment to Dashrath, a senior colleague, Bharati says,

“Why can I not get that job, because I don’t use make-up like her?”

He instantly reminds her

“No, because we are Dalits. Because your surname does not have Mishra or Sharma in it. We can be offered a desk to have our meals on, but they will never offer you a desk job. I worry that you may get singed in trying to reach a higher station. ”

Dashrath’s worry about the possibility of  physical and spiritual harm befalling Bharati is an uneasy reminder of the years of unnaratable violence faced by Dalit bodies and minds. The spectres of Hathras, Khairlanji, Kanpur, Una – all haunt the ‘singeing’ that he fears. This is also a significant moment in the film, because Bharati’s temporary misrecognition of her exclusion also becomes a reminder to the audience to recognise the operations of caste.

Dashrath’s seemingly harsh prognosis that even if Bharati did have the qualifications and looks, she wouldn’t be considered for the job because of her caste is confirmed later in the film. While Bharati is told that she did not get the job because she was not adequately meritorious, Priya Sharma in a moment of frank camaraderie admits that she barely knows the basics of accounting and impressed the factory manager by showing her knowledge of palmistry – a skill she has learnt on account of being born into a pandit /brahmin family. In the light of this knowledge, the venomous nature of merit based arguments and the ways in which they immobilize large sections of society are laid bare for us.

Ghaywan’s film also navigates the terrain of love and desire with deep sensitivity. Bharati is a queer woman, who is still mourning the end of a relationship. Priya Sharma too is queer, but unlike Bharati is also trying to fit into the role of a wife and daughter-in-law. Bharati instinctively recognises Sharma as struggling with her sexuality but also deeply conditioned by her dominant caste identity. As a way to protect herself from rejection she lies about her own caste. During their first personal encounter Sharma asks

“What is your name?”

“Your eyes are very beautiful Bharati.”

Here, a confirmation of desire is preceded by a confirmation of caste. Priya Sharma and Bharati go on to develop a tender romance. They are shown eating together, kissing, sharing stories of previous heartbreaks and childhood memories, enjoying non-vegetarian food –  breaching all rules of caste and patriarchy. However all this comes to a grinding halt when a distressed Priya Sharma tells Bharati that her family is pressurising her to have a baby and she is unable to feel any desire for her husband because she is in love with her. This is the second time Bharati misrecognises the situation – this time her inclusion.

Also Read: ‘Ajeeb Daastaans’ Review — A Mixed Anthology Bag With the Breezy and the Heavy Handed

Deeply moved by her declaration of love, she too tells Priya that she loves her and encourages her to embrace her ‘truth’. Further, she goes on disclose her Dalit identity in the hope that the enormity of Sharma’s love and desire for her will be enough to counter caste prejudice and in the process rid her of the burden of concealing her caste identity. Sharma instantly retreats. Bharati mourns yet another heartbreak and humiliation in silence. Ghaywan could have left us here, in a dark fractured world – where even the alchemic and vigorous force of desire fails to counter caste violence, but the brilliance of the film lies in him taking us through what happens after.

Also Read: Building a Feminism That Centres the Voices of the Oppressed

A quiet rage resurfaces in Bharati and she begins to work towards her dream job. However, she is too wise now to make appeals to the dominant caste on the lines of fairness and merit. In a cunning and deeply intelligent move, she finds a way to simultaneously manipulate Priya’s unsaid repulsion for her caste, her latent desire and repressed queerness, her imbrication within patriarchal expectations and the exploitative work culture of the factory – to cleave her way in. What makes Bharati one of most radical women characters ever imagined in popular cinema is not just that she is Dalit, queer and a worker all at once but that she no longer aspires for inclusion. The breaks she endures within her personal and professional life don’t cast her as a victim or a champion of narrow identity politics but as the leak that threatens to take over everything. A brilliant blue expanse.

The film is able to imagine re-distribution of opportunities and possibilities but without the condescension of the humanitarian burden of a universal ‘inclusion’ or the narrow prescriptive zone of identity driven politics.  At several points in the film, we see that Bharati resists being reduced to her biological and caste identity, and yet the structures that work against her are made only too visible as we go on. In the brilliant closing sequence of the film  we see her being offered tea in a separate cup in a Brahmin household; however, by this point she has already won. As she sips her tea, she also silently celebrates her victory in a milieu that has done everything to keep her out.

In her work on feminism and caste, Sharmila Rege asks us to imagine a ‘Dalit feminist standpoint’. As the name suggests, this is a location rather than an identity from where the structures of oppression can be observed and countered. Ghaywan’s film comes close to Rege’s formulation, where the individual experience of Dalit women’s lives is neither denied nor fetishized but used to see how social, economic and cultural structures produce her as an oppressed but equally argumentative subject.  It opens a space not just for the Dalit, but also possibly for the non-Dalit, to labour towards re-making themselves into Dalit feminists.