Nayak, Satyajit Ray’s Sensitive Portrayal of the Interior World and Insecurities of a Star

Uttam Kumar and Sharmila Tagore lend conviction to their roles, enhancing the enjoyment of the five-decade-old film. A still from 'Nayak'.

I don’t have a favourite among Satyajit Ray’s films, but Nayak is one I’ve seen many times. Although it’s among the few films for which Ray wrote an original script, the stardom of Uttam Kumar is in competition with Ray’s authorship, in keeping with the focus of the film as an examination of cinema itself.

Arindam Chatterjee (Kumar) is taking the train to Delhi for an award, having failed to get a ticket on a flight and seeking to avoid the press after a fight in a nightclub the night before. Journalist Aditi Sengupta (Sharmila Tagore), though she dislikes Bengali cinema, seeks an interview with Arindam for the magazine she edits, Adhunika. They strike up a deep connection as they talk and she realises that being a star is not what it seems. As they reach Delhi, she tears up her notes as reality will damage his stardom. He asks if she will write from memory and she says “Mone rekhe debo (I will keep it in my mind)” as she meets her father and Chatterjee is surrounded by his fans.

The film is deeply enjoyable aesthetically for many reasons – the sheer beauty of the leads, Kumar and Tagore, and their styling; the sensitive and convincing acting; the structure of the film; the striking images; and the fabulous train itself.

The film is on an old theme: life as a journey, finding the world on the train. Yet Ray’s attention to all the characters on the train is deeply engaging. All of them have some connection to the main story but each is a character study in him or herself and many of them have a view on cinema.

There is the sheer ghastliness of one of them, Haren Bose, with whom our hero shares his compartment. His wife and child seem too young for a man of his age and status; then we realise he’s expecting favours from Molly, co-passenger Pritish Sarkar’s wife, in return for helping the latter with his work. Sarkar is willing to encourage his wife to flirt with Bose but won’t let her pursue her dream of being in films. Bose thinks films are just another thing which show India’s backwardness, while Aghore Chatterjee is an old man who thinks everyone is lacking moral fibre.

The women on the train, apart from Aditi, are all film fans and adore the star who shares their journey and adopt a devotional attitude to him, regarding him as godlike, saying he is Krishna with his gopis.

The theme of mone rekhe debo (I’ll keep it in my heart) is also that we, the audience, have access to Arindam’s interior world, which even Aditi cannot reach. His dreams and flashbacks, only some of which he reveals to her, are framed by the journey made in the film.

Arindam has a nightmare where he begins by running around happily in piles of money but they turn into quicksand. His mentor, Shankar could save him but lets him go under. Later, Shankar reappears in another flashback as a man of the theatre who puts on plays for Durga Puja. He says that film actors are just puppets in the hands of others rather than artists.

Arindam’s flashbacks include a conversation with Mukund Lahiri, an actor who survived the transition to sound in cinema but not to realism. He raises one of Arindam’s greatest fears, that of failure and the crash that will inevitably follow reaching such heights.

Arindam is also aware that stardom means losing friends, as Biresh wants to mobilise Arindam’s stardom to rally striking workers but Arindam knows that this will damage his image and flees the scene. He knows also that women will let him use the casting couch, and the brawl mentioned at the beginning of the film was a fight he had with his heroine’s husband. This is recalled in another nightmare where the guests at a party are all wearing dark glasses as he had when he brushed Promila off on a phone call earlier in the film.

Also read: ‘Ray’ – a Tribute to a Master Filmmaker – Is High on Ideas, Low on Execution

Aditi’s work as a journalist is validated as the one who can penetrate his stardom, but she puts decency before her work as she sees behind Arindam’s star image to comprehend the real man, lonely and vulnerable as well as a kindly individual. She sees him in an almost suicidal moment after drinking and taking sleeping pills and quietly makes him go to his compartment before she will leave. 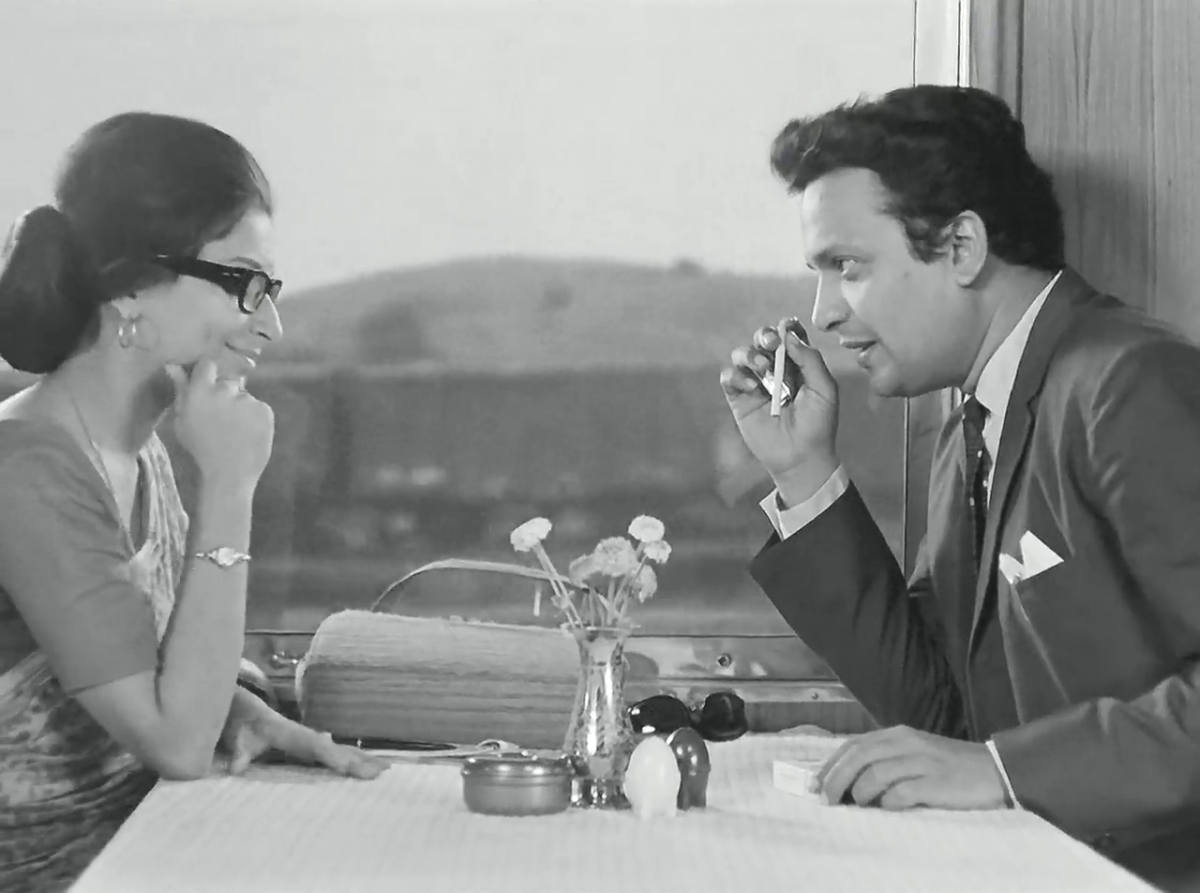 A still from ‘Nayak’.

Ray’s careful crafting and direction allow him to explore the concepts of charisma, celebrity and stardom at length. He was aided in this by having two great leads, Uttam Kumar the Mahanayak (‘Great hero’) playing the eponymous Nayak (‘Hero’) and Sharmila Tagore, his heroine who was now a star of Hindi cinema, playing the journalist. Each aspect of their characters in the film is carefully shown, from her dark-rimmed spectacles to his two-tone shoes.

Ray shows how we conflate the character with the star, confusing Arindam Mukherjee with Uttam Kumar, a person distinct from Arun Kumar Chatterjee (Uttam Kumar’s real name). Uttam Kumar was taking a risk playing the star, showing the ‘man behind the curtain’. Was it Ray’s stardom as a director that convinced him? No one else could have played this role; Ray’s other great hero, the late Soumitro Chatterjee, was not a star but a great actor whose roles in cinema have made him a legend.

Ray worked with stars but only as actors. So, the Uttam Kumar of Chiriyakhana (1967) was the hero but not presented as a star unless we take his character, detective Byomkesh Bakshi, while Ray always presented Sharmila as an actress rather than a star. Perhaps this was because her stardom was in her Bombay films, but Ray couldn’t work with Uttam Kumar in more than two films as his stardom in Bengali cinema was simply too big.

Ray’s look at stardom in Nayak is far more nuanced and layered than a celebrity, a person who is admired and adored but mistaken for the characters he has played and whom the audience feel they know as a real person. Arindam Chatterjee is more than just a talented, handsome and successful man who isn’t happy; he is a complicated figure of the Bengali man who is seeking his place in the world.

The question is why Uttam Kumar was such a big star in Bengali cinema and a major cultural figure, yet is not known beyond this world. Clearly such a beautiful, charismatic man, with the innocence of a child in his soft eyes and unruly hair, and a smile that could make the toughest academic melt, could have worked anywhere. Maybe he just didn’t want to, enjoying his huge success with a massive audience in Bengal.  No one has anything useful to say about Rajnikant not being a star in Bombay, so we can only speculate.

What made him such a huge star in Bengal beyond his looks and his talent? What did the figure of Uttam Kumar’s as a gentleman, a Bhadralok, mean to his audiences during those turbulent years in Bengali history?

The recent elections show the complex relationship between West Bengal and the rest of India, smoothed over in the ‘all Indian’ nature of the Hindi film. Nayak shows the journey from Calcutta/Kolkata to Delhi, from the former capital to the present seat of power. The star isn’t interested in the awards but wants to get away from the press, only to find a journalist who understands him. Note that these awards were not held in Bombay (Mumbai), the centre of the film industry. Nayak is about a more complex journey than that of an award-winning star.

A previous version of this article appeared in Daak Bungalow, a Bengali online publication.

Rachel Dwyer is a professor of Indian culture and cinema at SOAS, University of London.