Movie Review: 'Once Upon a Time in Hollywood' Explores the Effects of Fading Fame

The film has all of Tarantino's trademarks – breezy dialogues, gore and cinephilia. But it is, first and foremost, a fairy tale – seen through the eyes of a veteran who, in his heart, is still a 22-year-old cashier at a video rental store.

Brad Pitt and Leonardo DiCaprio in 'Once Upon a Time ... in Hollywood'. Photo: IMDB

Once upon a time, Rick Dalton (Leonardo DiCaprio) used to be a somebody: an actor, a star, known for flamboyant, black-and-white Westerns. But now, in 1969 – ignored by the film industry, dipped deep in alcohol – he’s hanging hard to what he had, transforming into a curious yet clichéd showbiz figure: a “has-been”.

Quentin Tarantino, the director of Once Upon a Time in Hollywood, shows the effects of fading fame, a loss that has crept through the gates of magnificence: Rick frequently halts while talking as if words, like his once ‘bountiful’ career, have deserted him. He appears unsure, lacks control, so much so that his longtime stunt-double, chauffeur-cum-helper and best friend Cliff Booth (Brad Pitt) looks more the person of authority.

Rick, though, is a perfect gateway to enter this world of subdued pangs and rambunctious cinema – and a sly possibility of reinvention. This is a movie set in and about Hollywood – and how time and history and ourselves, like memory, can be what we want them to be. Tarantino, among numerous other things, is known for breezy dialogues, gore and cinephilia – Once Upon a Time in Hollywood has all of that and much more. But it is, first and foremost, a fairy tale – seen through the eyes of a veteran who, in his heart, is still a 22-year-old cashier at a video rental store.

So the first thing that pops up while watching the movie is Tarantino’s love – or rather obsession – for cinema. For anyone who has seen even one Tarantino film, this shouldn’t come as a surprise (his dramas are crammed with movie references and homages – cinema, in the filmmaker’s world, is an object of desire, a sea of fascination, a weapon of destruction).

But given that Once Upon a Time in Hollywood is centred on a film star, Tarantino mines that opportunity like a film-famished geek. The movie opens with a Rick-starrer, 16-mm black-and-white Western, Bounty Law. Throughout the film, the aspect ratios shrink and expand (justifying the different movies-in-a-movie); characters watch TVs in homes, go to theatres to watch themselves on screen, beat a Hollywood actor (Bruce Lee) to a pulp on a film set.

Tarantino – fixating on inter-textuality, maximalism and irony – has always been a postmodern aesthete, but Once Upon a Time in Hollywood reveals something else, a fleeting touch of tenderness and sincerity; this is him embracing post-postmodernism. This is a sharp departure from his last two films – Django Unchained (2012) and The Hateful Eight (2015) – where he looked reluctant to challenge himself, seemed complacent to (almost exclusively) rely on his old tropes. But here, he digs deeper.

Consider an early scene, for instance, where Rick meets Marvin Schwarz (Al Pacino), a Hollywood producer, to discuss the possibility of collaboration. As they start talking, Rick seems to be in control, but slowly, Marvin starts dominating the conversation and the camera keeps locking Rick in close-ups, exacerbating his insecurity, and we see a broken man. This is vintage Tarantino, but with the reversal of end result. The pay-off here, unlike the filmmaker’s previous works, isn’t bloodshed or humour but vulnerability. With Once Upon a Time in Hollywood, Tarantino has found a new home. 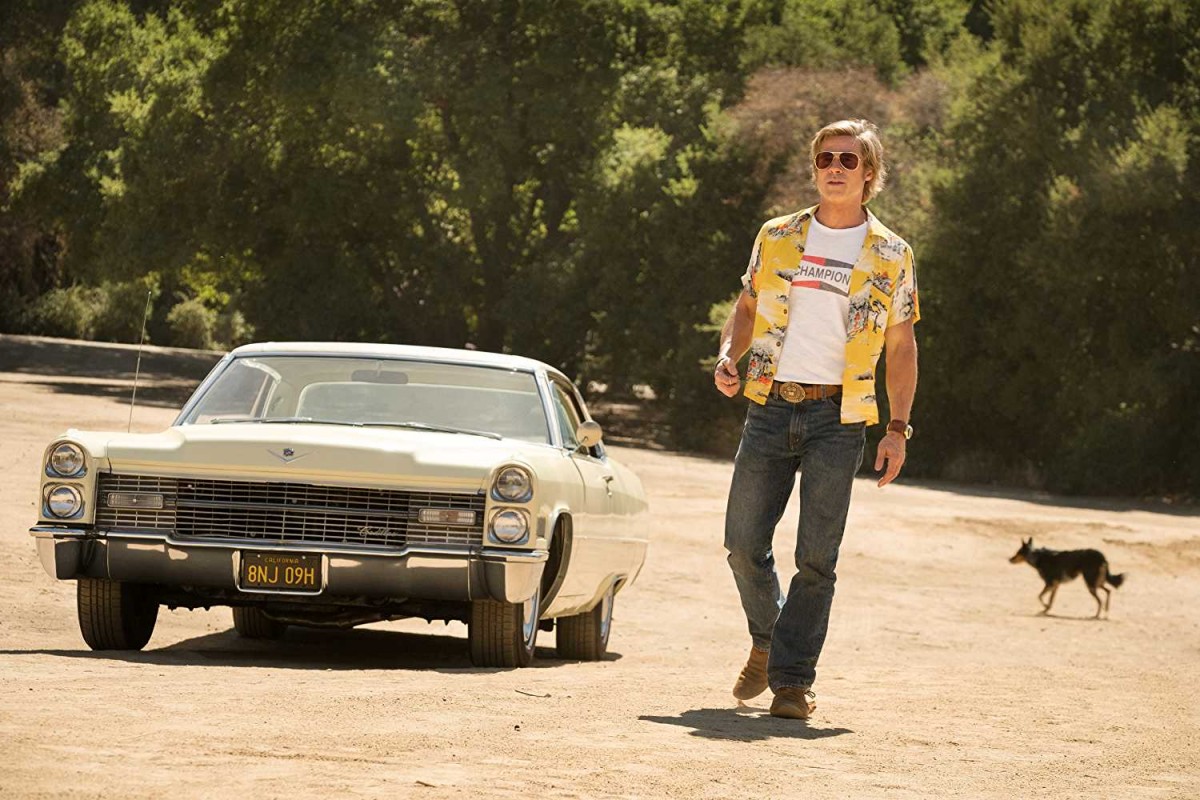 Brad Pitt in ‘Once Upon a Time … in Hollywood’. Photo: IMDB

The other part of the story is equally fascinating. Rick’s next-door neighbour is Sharon Tate (Margot Robbie), filmmaker Roman Polanski’s wife, a young, gorgeous actor, recently pregnant, who has just begun to fly in the endless Hollywood sky. We see her in parties, enjoying the good life; lounging in her home with Polanski and her ex-boyfriend (Emile Hirsch); watching her own film, The Wrecking Crew (1968), in a theatre, where cinematographer Robert Richardson films her in close-up, revealing something vital about her – she, preserving her own self-worth, gives the audience more credit than it deserves, thinking they’re laughing with her, not on her, a scene that wonderfully sways between latent sadness and hope.

And then there are the “f*#$ing hippies” – Charles Manson and his cohorts, one of them, a teenaged girl named Pussycat (Margaret Qualley), who befriends Cliff after a series of chance encounters. Margot Robbie in ‘Once Upon a Time … in Hollywood’. Photo: IMDB

All of this may not tell you something crucial about the movie: that how funny – and absolutely nuts – it is. Some of the scenes – such as Rick getting bullied by an eight-year-old ‘method actor’ on a film set – are charmingly absurd, bringing to mind the filmmaker’s finest work, Pulp Fiction (1994). It’s also quite evident, throughout the movie, that Tarantino is having a lot of fun, and the film’s infectious humour rubs on us (even an odd-lame joke, such as Cliff Booth being mistaken for “John Wilkes Booth”, feels welcome). Tarantino takes digs aplenty – at California’s counterculture, the self-absorption of Hollywood’s bit players, even Polanski.

Besides, he retains his strongest trait here: dialogues. A poet’s screenwriter, Tarantino’s lines are athletic and gymnastic marvels, underscored by pounding melody – jumping off the page, twisting, turning, outpacing each other, rhyming, winking at their own cleverness – and Once Upon a Time in Hollywood is a film that you can watch with your ears.

Tarantino also skillfully uses music to elevate our expectations and then twice-upend them. A Tarantino trope, in this regard, often involves mellifluous music set to gruesome visuals. At one moment, we see Manson approach Sharon’s house, as she’s grooving to a peppy track, we know what can happen but then Tarantino, going a step further, ultimately deflates the tension, which still makes you queasy, an example of a filmmaker looking inwards.

Impressive, consistent performances elevate the film, too. DiCaprio, playing the role of a man wrestling with himself, is at home here; Robbie constantly piques your interest, and Qualley – as a lost, bold teen who, in parts, is both naive and part of something sinister – is excellent, imbuing the movie with a pop vibrancy that is near-impossible to not like. But the best among the lot has to be Pitt. Tarantino films him with wonderful humanity – almost extracting revenge on Hollywood and life itself, given how stunt doubles have been historically treated across film industries – and Pitt pays him back by seemingly doing so little: laid-back, unfazed, a smile here, a punch there, all done with the precision of a Zen master who is open to tripping on acid.

After Death Proof (2007), Tarantino’s filmography has undergone a sharp change. He doesn’t just see himself as a director now but also a revisionist historian. He’s tackled weightier subjects in his last three films – the Nazis, the slavery, the post-Civil War era – and has, more importantly, used cinema to ‘rectify’ the inequities of history, implying that films can liberate us in all ways possible, that they contain all the answers. I don’t think so, and yet Inglourious Basterds (2009) remains one of my all-time favourites, and I appreciate the message – and the thundering artistry with which it materialised.

Something similar is at play in Once Upon a Time in Hollywood. Its climax is a gigantic subversion – mocking life, propping cinema up – and it, quite miraculously, works. In fact, it’s one of the film’s highlights. One school of thought may call it naïve (even ‘dangerous’) but Tarantino is on to a vital point here.

For someone who has been criticised for ‘glorifying’ violence almost his entire career, he shows how some of the most dangerous perpetrators in history look clownish in close-up, so petty, so irrational, so… devoid of engagement. He doesn’t attempt to examine or study or humanise them – what he does instead is troll them, slyly commenting on the nature of media and our unhealthy obsession with abhorrent social deviants.

But what makes Once Upon a Time in Hollywood even better is that this subversion is profound: it inches close to a life-affirming belief that maybe no one is really washed-up, that maybe there’s something to be said about second chances, that maybe if we wait long enough for the blinding sun to die, the night will come out in all its expanse and the stars will be allowed to shine again.