The nostalgia that the film evokes – a yearning, not so much for the past, as for a future that was betrayed in the past – has to do with a shared inheritance of loss. 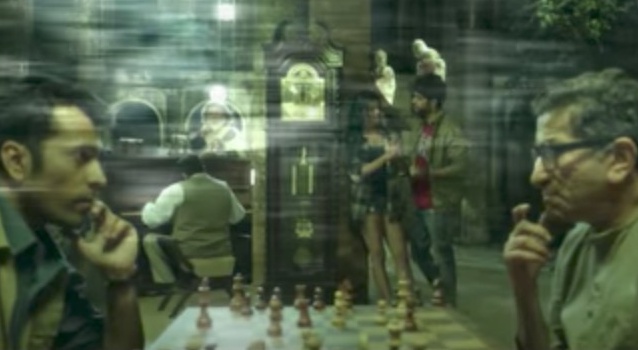 In a wryly self-reflexive moment in Anik Dutta’s Meghnad Badh Rahasya, a retired IPS officer (a cameo by Barun Chanda), alleged to have been sympathetic to Naxalites in the 1970s, refers, somewhat satirically, to Naxalgia – or the way in which the Naxalite movement of the late 1960s-1970s continues to haunt the collective imagination of the Bengali middle classes, 50 years after the Naxalbari uprising.

As many reviewers have pointed out, Meghnad Badh Rahasya itself is an expression of Naxalgia, stylishly wrapped in the form of a mystery set in the present. It contains elements of an urbane family drama, tongue-in-cheek political commentary and a morality play about personal and political commitment. Visiting Kolkata, Asimava Bose, a successful Bengali academic and novelist now based in Oxford, receives a mystery gift that unsettles him: a copy of Michael Madhusudan Dutt’s poem, Meghnad Badh Kabya, a re-telling of the Ramayana in which Ravana and his son, Meghnad, emerge as tragic heroes and victims of treachery rather than villains. A few days later, he disappears.

Parallels begin to emerge between the story of Meghnad’s slaying and Bose’s history as his second wife, Indrani and her filmmaker friend, Kunal, burrow into his past to solve the mystery of his disappearance. Just as Meghnad had been betrayed by a trusted member of his own camp, Bose’s college friend and comrade-in-arms in the Maoist movement of the 1970s, Indrajit (also another name for Meghnad), had been killed in a police encounter in 1971 after an associate disclosed his whereabouts.

Bose had escaped Indrajit’s fate by fleeing to England and to a life of success and privilege, seemingly light years away from his activist past. But the past comes back to haunt him – through recurring nightmares and the shadow it casts on all his relationships (visually evoked by the brooding colours and chiaroscuro lighting in scenes from Bose’s domestic life) and eventually in the person of Indrajit’s posthumous child, who, it turns out, holds the key to the mystery.

The film ends with this young woman revisiting the site of her father’s murder, rather than with Bose’s return or clues about what happened to him. Questions about Bose’s fate recede into the background as we watch her walk through the cavernous ruins of the mansion where her father had been hiding before his death (along with her mother, an activist who died in childbirth in a prison hospital) towards the spot where he was killed. The camera follows her at a distance, without showing us her face, but this reluctance to intrude on her grief only underscores its intensity.

An almost child-like figure dwarfed by the still-majestic scale of the ruins, she is accompanied on her lonely journey by a song (lyrics and tune by Debojyoti Mishra) that gives full-throated expression not just to her personal grief but to a more collective one as well. It wells up suddenly on the soundtrack, yanking the film away from the generic demands of the mystery (including a satisfactory closure) and the suave realism of drawing-room drama – and into a poignant encounter with the past and a future that never came to be:

Do you still stay awake in your sleep
Watching the stars march past in the sky? …

The road scorched by bullets
Where you let go of your friend’s hand,
Does it still come back
To haunt your emptiness?
These are dark times.
The rivers are still on fire…

No words were kept.
What words were there to keep?
The words float in delirium across the city.
Do you still think of changing times
When you see red flowers by the road?
Whose image do you trace, so desperately,
In the faded ink of old diaries?

The montage of images evoked by the lyrics, the elegiac tone of the musical accompaniment and singer Nikhita Gandhi’s soulful voice – gliding from the tremulous notes of melancholy to a crescendo of suppressed grief and back – meld into a cri de coeur (a cry from the heart) that tugs at your heartstrings, an impassioned torch-song for a dream deferred. In conjunction with the visuals in the last sequence, it sucker-punches us, catching us completely off guard and stripping us of our emotional defences.

As Indrajit’s daughter, her back turned to us, looks at the lake into which her father had fallen after being shot by the police – a scene visualised in a stark black-and-white flashback, as if through the lens of her imagination – we find ourselves face-to-face not just with a collective past but also with a present riddled with memories of loss and betrayal. The nostalgia or Naxalgia the film evokes is a yearning not so much for a hallowed past as for a future that was betrayed in the past. It is shot through with grief – for a lost generation, lost dreams, lost horizons of hope, squandered possibilities and the much-awaited turn that history did not take.

The impact the ending had on us – and on many of our friends who also grew up in left-liberal circles in Calcutta in the 1970s and the 1980s – has a lot to do with our shared inheritance of loss as members of the extended family of the Bengali Left, including left-leaning liberals as well as militant Maoists. For us, neither Indrajit nor Bose are fictional characters. They are more like an uncle, an older sibling, a cousin or the child of a family friend we had known or heard about: firebrand idealists, perhaps misguided but amongst the brightest of their generation, who had ended up losing their lives or their ideals or their best years in jail as the Naxalite movement of the 1970s died down to a smoulder. And their stories, in turn, brought back ghostly echoes from the left movement of the 1930s-1950s, which had been fuelled by the courage, idealism and sacrifices of our parents’/grandparents’ generation.

The leftist dream of a better tomorrow however, remains elusive. Indrajit and his ilk were betrayed not just by trusted comrades or by political allies or by a state-machinery that resorted to savage violence and extra-judicial killings in the name of democracy. They were also betrayed by the fanaticism and blind faith of a left leadership who sent – and continues to send – their young into losing battles. And in the long run, they were betrayed by the Left’s inability to own up to its own history of failure. It is, of course, hard to face the fact that the promise of freedom Communism had once held out for millions had been repeatedly and brutally squashed by the repressive regimes spawned by Communism in practice (in the former Soviet Union and eastern Europe, in Mao’s China, even in Castro’s Cuba). While Leftists are quick – and right – to decry rightwing authoritarianism and orthodoxy, there is still a widespread tendency, at least among the Left in India, to shy away from denouncing leftwing coercion and dogma equally stridently.

This kind of hypocrisy or denial, coupled with a tendency to unthinkingly fall back on Marxist orthodoxy, has robbed the Left of the moral and intellectual high ground it had once claimed. It is thus unable to mount any kind of effective resistance against the fascist forces of the right that are on the rampage not only in India but across the world, at a time when the need for the resurgence of a leftwing progressive front could not be more urgent. This makes the courage and sacrifice of Indrajit and others like him all the more poignant. They might be dead but as long as poverty, injustice, and oppression exist, their dream of a just society will live on. And Salil Chowdhury’s “Pathey ebaar namo sathi,” a classic Leftist anthem from the 1950s that is never sung in Meghnad Badh Rahasya but runs as a musical leitmotif all through the film and surges on the soundtrack as the credits roll, will continue to induce a rush of hope about the torch being taken up by another generation of dreamers:

Step into the street, mate,
We’ll figure out the way on the road,
In the teeming crowds, in the different paths,
We’ll find our desired destination…

Manishita Dass teaches film studies at Royal Holloway, University of London, and is writing a book about the IPTA movement’s impact on Indian cinema. Maitreesh Ghatak is Professor of Economics at the London School of Economics. He tweets @maitreesh.