Movie Review: 'Love Aaj Kal' Suggests Imtiaz Ali Has Given Up on Trying

The first thing that strikes you about 'Love Aaj Kal' is Ali's poor conception of love. 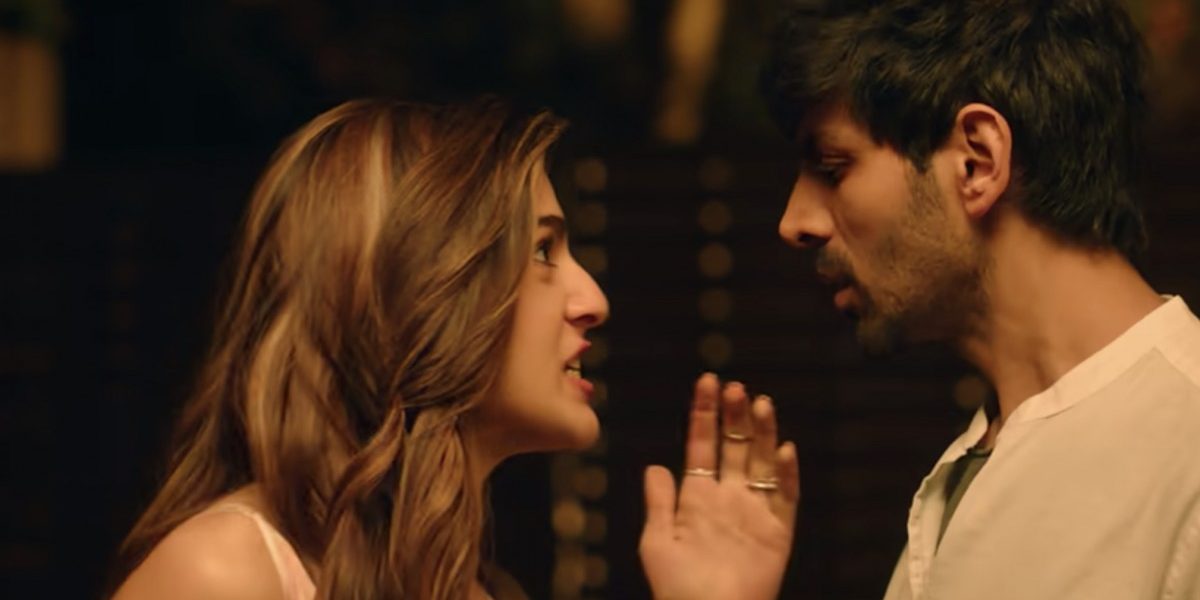 Sara Ali Khan and Kartik Aryan in a still from 'Love Aaj Kal'.

You now get the feeling that Imtiaz Ali is just faffing around – in a way no filmmaker should.

For the longest time, a joke about him was that he makes the same movie over and over again: a directionless man, a Manic Pixie Dream Girl, a literal and metaphorical journey of finding one’s True Self, end credits.

His 2014 drama, Highway, the best Bollywood film of the year, was based on an episode of the anthology series Rishtey (1999), written and directed by Ali. Then came Tamasha, whose tagline, prominently displayed on the poster like medals on the chest of a war hero, read, “Why always the same story?” It looked like an expression of condescension flung at the audience – the kind of arrogance perhaps expected from a great, eccentric auteur. The problem with Ali is that he’s neither great nor eccentric. (And not even an auteur.) Then came Jab Harry Met Sejal — referencing his 2007 movie in the title – of which the less said, the better.

With his latest release, Love Aaj Kal, Ali has managed to pull off a stunning cinematic robbery. He’s remade his own film. Same title – he didn’t even bother adding a 2! Same story, with (very) little changes. Same producer. Same songs: two numbers from the original resurface here with slight modification. It’s not as if the original, the middling 2009 drama starring Saif Ali Khan and Deepika Padukone, was the Casablanca (1942) of the aughts.

The first thing that strikes you about Love Aaj Kal is his poor conception of love. Everything here is segmented, an extension of the simplistic either/or world. There’s either love or sex. Career or love. Old Days or the New Age.

Veer (Kartik Aryan) and Zoe (Sara Ali Khan) meet for the first time at a bar. Sparks fly, they end up at his pad, make out, and just before they’re about to have sex, Veer says, “Don’t you think we’re underutilising this moment?” And stops. The implication is that he’s so into Zoe that he can’t have sex with her.

Also read: ‘Shikara’ Is a Poetically Told Tale That Somewhere Loses its Way

After this scene, Veer begins stalking Zoe. Equating stalking to love has become such a tired trope that it no longer elicits any feeling – not even disgust. Worse, we have no idea what made Veer fall so hard for Zoe. Ali shows no conversation between them, doesn’t even show what Veer saw in her. We’re simply expected to assume that Veer somehow has Intense Feelings for The Girl.

This kind of sloppiness, where the characters’ Feelings markedly alter without any credible reason, mars the entire movie. This worldview that prioritises emotions over people – disregarding reasons and individualities – is misleading, even dangerous. It’s not just simplistic but also belongs to worlds that thrive on monoculture and post-truth.

Which makes perfect sense, for Ali is a deeply conservative filmmaker in the garb of being ‘modern’. What’s more offensive about his films in general, and this one in particular, is not his conservative bent, but the fact that he postures so hard to be hip.

Later, Zoe takes a U-turn. Now she only cares for Veer, not even her career – so much so that she even declines a much-cherished offer. Veer, on the other hand, wants nothing. He’s the Manic Pixie Dream Boy, his only purpose in the story is to make Zoe realise her True Self. These are not people but thesis statements, and to hear them hold forth on Love and Life is the equivalent of watching a coked-up 20-something at a house party, saying “Bro” a lot, confusing banality for profundity.

Then there’s the gender politics. Ali has had a long history of conceiving female characters in narrow terms. And he’s only gotten worse with age. His idea of a ‘modern’ Indian woman is this: someone who makes the first move, says “Fuck”, enjoys hooking up and – surprise! – is Ambitious. You can almost imagine one of his story narrations with his assistants going, “So progressive, sir! So feminist, sir! So E-D-G-Y!” But again, look a little deep, and you’ll find out that for his female characters, love isn’t a feeling but a tool – a tool for domestication.

So Zoe’s aspirations make her lifeless and conventional. When she concentrates on her career and finds a job, she’s not really happy. Hindi films have peddled this terrible idea for long: that fulfilment can only come via romantic love – and that all other forms of love, including one for your career, make you less human. Veer, in contrast, is painted as some kind of an iconoclast who rejects job offers. This constant glorification of a certain kind of ‘lost man’, seen in every Ali film, has become painfully trite.

At one point, Raghu (Randeep Hooda), the hero of the story set in 1990, even tells Zoe, “Nasha hota hai yaar!” – “You know it’s risky” but you do it “because you have a heart”. I feel ya, Raghu: you’re just one “Bro” away from ruminating like… Rumi.

Love Aaj Kal has some incredible plot twists – people upend their lives in a matter of minutes. They hear voices in their heads, lash out, take irrational decisions. Instead of a love story, you suspect a mental health angle. Ali’s characters don’t need lovers as much as they need therapists. Or, well, Twitter accounts.

The high points in this film are so few that you can literally count them on your fingers. Khan brings a lot of spontaneity, verve and humour to a lacklustre role. Aarti Bajaj’s editing is consistently impressive. The first quasi-sexual encounter between Veer and Zoe – a moment shared by jumpy strangers – materialises via… jump cuts. When Raghu is telling Zoe his story, Bajaj often juxtaposes two frames separated by a soft boundary: a concise way to convey multiple stories. A song right after the interval, cut feverishly, is even more of an impressive achievement, distilling a lot of information in a short span of time.

As far as Ali is concerned, there’s one fleeting scene where you see some strains of vulnerability and feel something. A scene where Raghu remembers his past and reflects on his mistake of committing too early. It’s just a moment, though, and it goes as quickly as it comes.

There’s another moment though that stays with you longer. At one point, Zoe asks Veer, “Tum humesha stupid hi rahoge na?” To which he replies, “I can’t help it, Zoe. Main koshish karta hun.”

Are you even trying, Imtiaz?