The Caste Dimensions of Kangana Ranaut’s Onslaught on Bollywood

Kshatriyas, who never took to modernity, are now beginning to assert themselves politically and in the film industry. 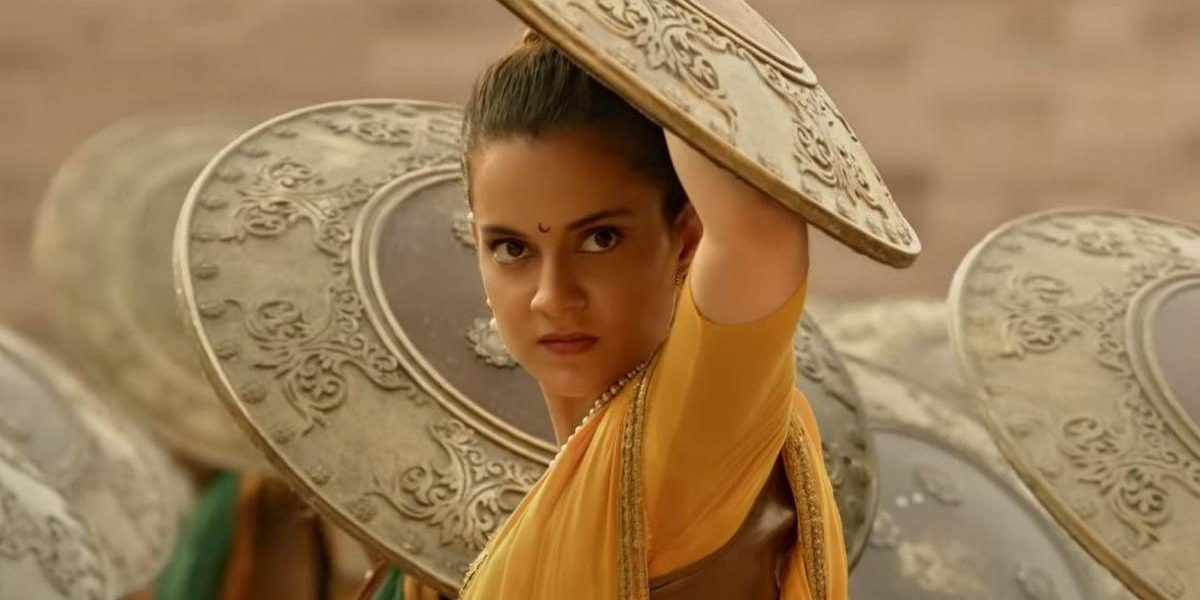 Kangana Ranaut in a still from 'Manikarnika'.

Sushant Singh Rajput’s suicide, Kangana Ranaut’s rebellion against the Shiva Sena government and also the so-called drug culture of Bollywood is not mere politicking – it has deep caste dimensions as well. The Indian media, particularly the English media, is trying to avoid this question or perhaps they are ignorant of it.

Sushant and Kangana are emerging actors in Bollywood from the Kshatriya community. Bollywood, unlike other regional language film industries, is controlled by Brahmins, Banias, Kayasthas, Khatris and a few Muslims who got out of the conservative controls of Mullahs.

Kshatriyas, as a historical ruling varna after independence, did not emerge as a modern, English-speaking and westernised community. It remained more conservative until the very recent past. Bollywood gradually emerged as a modern industry of English educated, bilingual – Hindi and English – speaking and writing operators with a westernised capitalist culture.

Right from the beginning, the Hindi film industry was imitating Hollywood in several entertainment and film production forms. It is quite regressive at its core, even if had pretensions of modernity, which was a good marketability factor. Most top actors and directors are well exposed to the west, though the producers may come from various backgrounds. It has been open to foreign-born men and women as actors and technicians from the very beginning. All these factors gave it a cosmopolitan dimension.

Brahmins, Banias, Kayasthas and Khatris took to the film industry swiftly, as they got reformed during and after the nationalist movement. With the RSS/BJP coming to power in 2014, there is a cultural conflict in the industry and quite a few of them took a strong pro-Hindutva stand as they saw the writing on the wall. Otherwise Bollywood culture was always in conflict with Hindutva culture policing. However, still many are uncomfortable with communalism, religious conservatism and culture policing.

The Kshatriyas remained outside this industry, as they were confined to their feudal Hindu culture. Their women are still today more male-controlled than the women of any other dwija community.

Kshatriyas fell from their social pedestal when they were reluctant to pursue English-medium education unlike the other dwija castes such as Brahmin, Bania, Kayastha and Khatri. This affected their political chances too.

Brahmins took to English-medium education and benefited – from Raja Rammohan Roy to Pandit Jawaharlal Nehru to Atal Bihari Vajpayee (and in between, Indira Gandhi, Rajiv Gandhi, Morarji Desai and P.V. Narasimha Rao) – the Brahmin domination was very visible in Delhi. From Banias emerged Mohandas Karamchand Gandhi to Rammanohar Lohia to Narendra Modi (with an OBC certificate). They have their roots in English education and their industrial capital accumulation (though Modi is not English educated, his support base of monopoly Bania capital is unparalleled). And from Kayasthas came Subhas Chandra Bose to Rajendra Prasad to Jayaprakash Narayan to Lal Bahudur Shatry to Jyoti Basu. Inder Kumar Gujral and Manmohan Singh, who became the prime ministers of the nation because of certain political circumstances that favoured them are from a Khatri background.

The most visible Kshatriya politicians were V.P. Singh and Chandra Shekhar who became prime ministers and both of them were not liked by media at all. Chaudhari Charan Singh (Jat) and H.D. Deve Gowda (Vokkaliga) were Shudra prime ministers who also did not have that sophistication and good English education. From that position, they represented the rural peasant economy and culture. On its part, Bollywood has not had too many Shudras and Dalits in high end operations of the industry.

What is interesting is that both V.P. Singh and Chandra Shekhar were pro-poor and Singh’s pro-OBC/SC/ST position is well-known. They were not leaders of Kshatriyas as such.

Till Yogi Adityanath emerged from a Kshatriya background by using the Ram mandir issue as his trump card, there was no strong leader among them. Yogi, with his in Hindutva robes as a saint (exactly like Vishwamitra, whom Brahmins opposed), reached the level of a commander of Hindutva forces. An example of the conflict between Kshatriya and Brahmin in UP was seen in the recent killing of gangster Vikas Dubey in an ‘encounter’.

Kshatriyas as a community are now organising themselves, moving away from a position of victimhood. They have formed a Sri Rajput Karni Sena, which protested en masse against the film Padmavat in which Deepika Padukone (a Saraswat Brahmin) acted. Now the Karni Sena has reached Mumbai to ‘protect’ Kangana, apart from the central police protection that she is provided, with Yogi has backed. Kangana Ranaut found taking a pro-BJP stand useful in standing up to the Shiv Sena. (Though Uddhav Thackeray’s family is a Chandriasena Kayastha Prabhu, but the regional party has a lot of support of the Marathas and also OBCs.)

Kangana, in her initial years, had said that she would not survive in Bollywood because of lack of fluency in English and her small-town roots. But she has, and now she has reached a stage where she can fight Rhea Chakraborty, who is part Bengali Brahmi,n and also attack a stalwarts like Jaya Bachchan (by birth a Brahmin, married to a Kayastha).

Kangana has taken an anti-Congress posture with a strong nationalist Hindutva image. She described Shiv Sena as a ‘Sonia Sena’.

In her 2019 film Manikarnika, Ranaut dons the role of Rani Lakshmibai of Jhansi. As a co-director, Kangana was able to distort the historical Lakshmibai into a reformist and feminist ideal of Kshatriya women. Though Lakshmibai was born in a Brahmin family, she became Kshatriya by marriage and Kangana cleverly used that in her portrayal.

Her foray into modelling and cinema was opposed by her family, unlike the families of Deepika Padukone and Priyanka Chopra (a Khatri) who encouraged their daughters to take up any career they liked. Kangana’s family is not exposed to western life-styles like those of Padukone or Chopra or Aishwarya Rai and Shilpa Shetty (both the well-educated community of Bunts).

Kangana Ranaut comes from a community which has a history of being ruling classes with great antipathy towards anything modern. The  Kshatriyas have no large investments in Bollywood, unlike other dwijas and Muslims. Her boldness comes from her present political location. Yogi Adityanath is now planning a film city in UP to undercut Mumbai’s importance. Ranaut too wants to undercut Bollywood’s monopoly as the national (Hindi) film industry. This is not a new road map for the whole film industry with a monolith, Hindutva-nationalist idea. This is part of their ‘One Nation One Cultural Nationalism’ project. Kangana fits the bill perfectly.

Also read: Security of Private Persons at State Expense Must Not Be an Act of Political Patronage

Kangana is an emerging heroine and producer with the backing of an entire community. The entire Kshatriya community is upset with Sushant Singh Rajput’s death, and it forced the Central government to investigate the death by sucking in Rhea Chakraborty. Again, Chakraborty was supported by Congress leader Adhir Ranjan Chowdhury in parliament by his open statement that she is a Brahmin from Bengal and hence being harassed. With Kangana also attacking Jaya Bachchan, things are becoming more and more murky.

Kshatriyas are strong supporters of the RSS because the only non-Brahmin head it had was Rajendra Singh (Raju Bhaiya), a Kshatriya, and it was during his tenure that the Ram Janmabhoomi temple issue was re-opened. The RSS cannot afford to ignore Kshatriyas in the organisational structure. They are beginning to make their presence felt. Kangana is a person to be watched, not just in cinema but in politics too.

However, as of now they are the weak link in the dwija social force in terms of exposure to modernity and English-medium education. Though historically they are big meat-eaters, some of them are turning to vegetarianism to fit into the RSS’s food culture. Interestingly, Kangana is said to have turned vegetarian in a filmy culture where Brahmins and Banias have become meat-eaters.

Sushant Rajput’s untimely suicide and Kangana Ranaut as a fighting heroine have made the right-wing media give more attention to the community. In Uttar Pradesh, Brahmins tried to promote Parushurama with the support of Samajwadi and Bahujan Samaj parties after Vikas Dubey’s encounter. Now it is Kangana all over.

Yogi Adityanath has organised the Kshatriya community like no other community in the past. Kangana’s surge can be seen as Kshatriya challenge to the Bollywood industry and the old hegemonic communities within the dwija camp in other fields as well.