The Dalit kids from slum areas remain the central focus of this remarkable film. 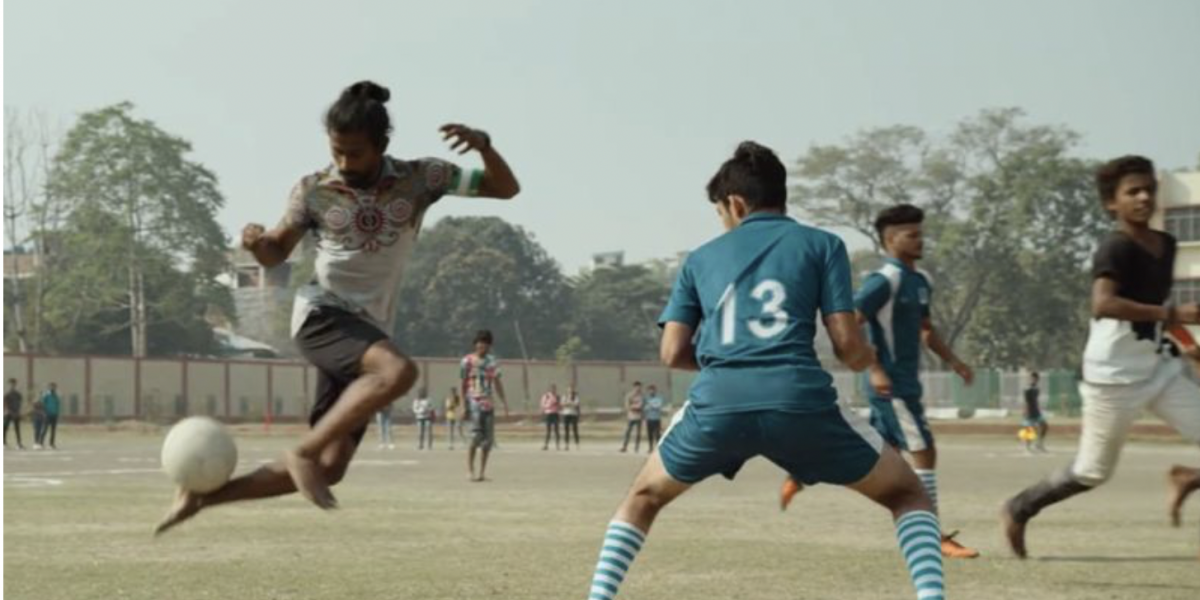 Jhund is not a sports film. Jhund is a film. Genres often misrepresent a film, reducing its scope and intention, and tend to fix the audience’s gaze and perception. Jhund is a story of slum kids who are introduced to the charms of football by a retiring sports teacher, Vijay Borade, played by Amitabh Bachchan. Borade’s character is based on Vijay Barse, a school teacher turned social activist, who introduced Slum Soccer in Nagpur in 2001.

Borade brings football to a Nagpur slum and dramatically changes the lives of its intense kids. He first notices the kids while getting caught in the rain as he is passing by the slum. The sudden rain creates an atmosphere of natural joy and romance for the kids who start kicking a plastic object.

It isn’t just their skill, but their spirit of life that catches Borade’s attention. It impresses him so much that he lures them with money to play the game. The kids are not initially impressed by the invitation. Everything makes sense to them only if it contributes to their economy. But the passion of football takes over, and soon economy takes a backseat. The kids are willing to play even without the money. Amidst the squalor, the ramshackle van and heaps of scrap lying around, the football drops into their patch of green like a magical object from another space. The kids take time to learn the grammar of football. The grammar of language is picked along the way, as we learn to speak and write. The spirit of grasping (a) language precedes (its) grammar.

The daily lives of the slum kids revolve around snatching, selling scrap and stolen goods. The economy of poverty is held together by activities and transactions that fall outside what is permissible by law and social contract. Reality is starker than how privileged people understand the world: the regime of social morality must suffer the contradictions it creates. To live outside the norms of law involves risks, and risk involves violence. This violence is not merely directed towards the outside world. The kids commit violence upon themselves in order to survive the contradictions between desire and livelihood. Humour and camaraderie are integral to the spirit that makes these kids overcome the irreconcilable constraints of life.

Borade does not feel overwhelmed by the edgy flavour of the kids’ humour and the unpredictable nature of his association with them. The kids in turn respond with reverence and a mutual sense of affection. They realise the old teacher is sincerely involved in trying to introduce something meaningful and redeeming in their lives. Borade explains to the kids the “scientific” law behind what makes an aircraft take flight. Behind that calculable force of science, however, is an incalculable force of the human spirit. That spirit is capable of magic and wonder. It is more intense in people who live difficult lives, arousing the spirit trapped in the logical acts enforced by poverty.

Snatching a chain needs skill. There is thrill in catching someone unawares. It is however caught in a logical act that is stifling. Every act reminds you of what you lack. Those skills get transformed with the football. The tricks that help you dodge opponents and put the ball into the net are not just delightful. They are redeeming because you are not committing a crime, you are not reminded of what you lack, but what you possess. It helps you break the drab reminders of existence. Football is capable of igniting a magical power to defy logic, and exceed your expectations. It helps the kids find their collective language of desire. The football in Jhund is the sublime object of desire. It works as a metaphor of magical emancipation. When Ankush ‘Don’ Mashram defies gravity to possess the ball in the air in his attempt to dribble past his opponent, he produces a moment of beauty.

The slum kids, predominantly comprising Dalits, have one, yearly moment of celebration during Ambedkar Jayanti. They draw a sense of pride from the three epic Marathi figures of Shivaji, Jyotirao Phule and Ambedkar. The festival connects them to their social identity and history. There is an old-world pragmatist among them, who refuses to donate money for what he calls “DJ music”. The festival does not transform their fate, but it registers their sense of identity. It marks their date with greatness in the calendar. The old-world pragmatist rises to the occasion and makes a generous contribution when the kids needed money to go to Tbilisi, in Georgia, for playing the Homeless World Cup.

Amitabh Bachchan does not dominate the screen by his presence. He is not the film’s frame of reference. Even though the film is inspired by the work of the character he portrays, filmmaker Nagraj Manjule focuses on the slum kids. Even in the court scene where Borade sensitises the judge on class/caste neglect and prejudice, he is not playing the hero but a facilitator for his team to find its place in the sun. Manjule extracts a remarkably restrained performance from Bachchan. The unforgettable characters of the film are the kids who never leave your sight, and stun you with their performances. Most of them are untrained: their lingo, their stylish and colourful clothing and hairdo, their mischievous simplicity, their hard life, and how they cope with daily vulnerabilities. The trepidations that Monika and her hassled father (a striking cameo by Manik Babulal Gedam, whose language is underscored by the fragility of his expressions), undergo to make a passport for the girl reveal how chance favours must intervene to help poor people to receive a stamp of legality.

A still from Nagraj Manjule’s ‘Jhund’.

Borade’s team manages to overcome the hardships and get their tickets to national stardom that comes with an international trip to play football. As the flight carrying the kids passes over their slum, the camera focuses on the wall segregating it from the neighbourhood, where it is written: “Crossing the wall is strictly prohibited.” The kids, with the help of their reformist coach, are catapulted to the national frame of imagination. Their national status however does not transform social reality. The film reminds the audience that in a caste society that outcastes people, there is a wall between the social and the national.

It is possible to take a leap into the national sphere that allows mobility, without any corresponding change occurring in the social sphere. The deep chasm between nation and society marks the dilemma of the political in India. Political reality is divided between the national and the social (which is also, inevitably, the local). The social apparatus is deeply reluctant in granting the slum kids a chance to elevate their condition by displaying their skill. The people who swear by talent refuse to recognise the same in people who do not belong to their own social class. This is class (and caste) jealousy. To make a point on plain economic disparity, the slum kids in Jhund play barefoot against the college team. Mohun Bagan played barefoot against the All-British East Yorkshire Regiment in 1911 (except one Bengali Christian player who had boots and a jersey). It’s been 111 years since then, and 75 years since India won independence.

Manjule reveals his intimacy with the subject. The sense of aesthetics that informs his craft is deeply imbued with exploring the nuances of marginality. Manjule does not simply sensitise the audience, but does something more: he invents an audience. It is a mark of great filmmakers.

Violence in Hindi cinema has been trapped for decades in masculinist overdose that started with the angry young man syndrome of the 70s, and aestheticised in new ways by filmmakers like Ram Gopal Varma and Anurag Kashyap. Violence is used in their films as a consumable item showcased by characters lacking any depth. Manjule breaks that hangover by introducing a social context, where the criminal is not reducible to his criminality, just as the human spirit can rise above social conditions. The film handles these complex issues by allowing the paradoxes of innocence to freely express its language through gestures and words.

Ankush can sharply aim the razor against a social adversary, be shyly in love with a Savarna girl, embrace the joy of football, and cry in an empty warehouse when faced with dejection. Ankush is not simply a character, but a boy representing social reality. This doubleness is part of Manjule’s cinematic imagination. We encountered it in Iranian filmmakers like Abbas Kiarostami and Jafar Panahi, where the formalist distinction between documentary and fiction is erased.

Jhund’s overall soundtrack is exceptional. The cacophony of the slum is continually playing in the backdrop. The rap and hip-hop by Ajay-Atul are high-voltage expressions of defiant energy and dreams. They translate the anger and despair of young people pushed to stealing coal from freight trains to earn for a precarious life.

Jhund has introduced a new grammar of filmmaking in Hindi cinema.