'Jagga Jasoos' is Beautiful but Confused

There’s a good film and a solid story somewhere in 'Jagga Jasoos,' but it can be only accessed beneath its layers of indulgence and confusion and ambition. 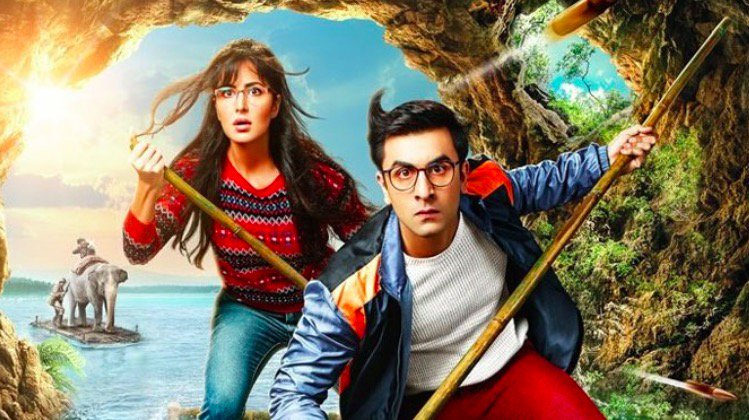 Quite early in Jagga Jasoos, starring Ranbir Kapoor and Katrina Kaif, filmmaker Anurag Basu lays out his thesis statement. Jagga (Kapoor), who is raised by a college professor, Bagchi (Saswata Chatterjee), has trouble speaking. He stammers, lingering on one word for so long that sentences exhaust him. Bagchi comes up with an idea: Jagga should make use of his right brain – which is “creative” and “mad” – and sing instead.

It’s a delightful little scene, hiding larger meanings, as here, an Indian father, bucking the convention, is nudging his son towards the arts. But its second meaning, Basu’s thesis statement, is more significant in the context of this film (and his previous, Barfi!, also starring Kapoor): That language – a shorthand for conventional communication (employed using words, sentences, phrases) – is not necessarily a gift and its absence, not necessarily a burden. (Here’s a toughie, a question asked by film critic and radio presenter Tommy Edison, a few years ago, “How do you describe the colour red to a blind person?”) It’s a philosophical line of inquiry, the efficacy and limitations of language, which was evident in Barfi! too; a love triangle, where the two characters who ultimate get together are those who can’t communicate conventionally.

The parallels between Barfi! and Jagga Jasoos are hard to miss. Besides sharing a lead and a motif, there’re other similarities too: they examine life’s misfortunes through a lens of humour and eccentricity, include an endearing father-son relationship (the mother figures are notably absent in both films), feature a good-natured bumbling cop, softly disrupt the narrative’s linearity. And, equally striking, both films, lensed by cinematographer Ravi Varman, depict a visually rich world – the kinds most Bollywood filmmakers display no patience or imagination for.

Barfi!, even with all the accusations of plagiarism (the nuances of which are out of the scope of this piece), still remains a film, whose world I’d like to experience, live inside. Jagga Jasoos is no different. Opening in Manipur’s Ukhrul, Jagga Jasoos is marked by a distinct visual language and whimsy production design (very Wes Andersonian, some might say). As evident in Barfi!, Basu has a thing for settings and objects; here too wonderful things happen with, and on, accommodative jute baskets, pliant lamp posts, brittle bridges. Static portraits become scenes; on-stage props become locations; characters walk from one scene to the next. There’s much interplay between pictures and video, stage and cinema, static and kinetic in Jagga Jasoos’ initial portion, and it keeps us engaged, asking us to get on board. In Jagga Jasoos, fanciful elements lead to shots of reality, prompting us to think, “How real is this film?” And it’s as if Basu can read your mind. For, at one point, when Shruti Sengupta (Kaif), a journalist, is telling Jagga’s story to a bunch of kids, one of them goes, “Is Jagga real?”

But if Barfi! was meditative, Jagga Jasoos, much like its eponymous hero Jagga, a detective teenager, is frenetic, centered on chase and revelations. In fact, so heightened is this film’s energy that, after a point, it involves its audiences in the same game its hero is committed to – the only difference, unlike Jagga, we are trying to unravel the film.

Jagga Jasoos is caught in a bog of its own making. Like Jagga, Jagga Jasoos is trying to find its own language to communicate. Its ruse – of making Kapoor sing, instead of talk (or stammer) – works, but only to an extent. And that’s so because Kapoor, that rare thing in Bollywood, a star who is also a brilliant actor, has to contend with the limitations of his character: he has to emote, for the most part, through songs. It’s a device that sounds good in theory – maybe even works on paper – but it doesn’t translate on screen with a lot of finesse. There are a few scenes where Kapoor comes into his own, affecting much by doing so little, but they’re few and far between. And then there’re structural issues that, again, arise from the film’s nature. Given that Jagga, much like Tintin, solves a series of cases, the film feels compelled to introduce, and showcase his, sleuthing. His first case, in particular, Jagga Jasoos and the Mystery of Clock Tower, doesn’t quite work, because it doesn’t exemplify his detective skills. Instead, this talky segment, marked by superfluous songs, hastily summarises the case, lacking stakes and intrigue. The second case, unlike the first, is related to the main plot, but it’s marked by insipid storytelling and, more importantly, doesn’t see Jagga as someone with remarkable ingenuity. The crux of Jagga Jasoos, Jagga’s third case, his quest for his missing father, comes to the fore only around the halfway mark, elongating its runtime.

To make things worse, things don’t get better in the second half. And it’s so because Jagga Jasoos is undone by its wildly inconsistent tone and pace. At various points, you’re not quite sure what to make of this film. The fact that Kapoor isn’t allowed to (conventionally) act – and Kaif, well, can’t act – robs the film of its emotional weight. Which is okay, for there are different ways to speak to the audience. But its next possible recourse, comedy, is a letdown, too, because the film isn’t particularly funny, either. It does have a pleasant vibe to it, but there’s nothing in there that elicits a meaningful emotional response. The genre pleasures, too, in a film like this – an adventure drama – are conspicuous by absence, which leaves you curious and dissatisfied. At one level, its plot contrivances, its delightful world, its nonchalant interpretation of threat, feels fine, because the film borders on the imaginative (the third story’s setting, Mombaca, is in fact a fictitious country), and yet, at another level, it is not, because this film wants to be ‘real’; it wants to be taken seriously. A subplot of the film is about insurgents in Manipur (and references similar other groups in the country); there’s a political song, Humko Usse Kya (How Does it Concern Us), commenting on our collective indifference, mentioning, among other issues, farmers’ suicides. There’s just too much going on – for the film’s own good – in Jagga Jasoos.

Ambition is valuable and impressive, and numerous Bollywood filmmakers lack that trait, but not when it’s saddled on a film like this, which wants to go its own way, find its own method. Beset by numerous delays, a film that’s taken more than three years to shoot, Jagga Jasoos, even after its release, is tied in its own knots. It’s a pity, because the film does get many things right (just take a beautifully realised song, Galti Se Mistake, a playful comment on masculinity, for instance). There’s a good film and a solid story somewhere in Jagga Jasoos, but it can be only accessed beneath its layers of indulgence and confusion and ambition. Jagga Jasoos tries, and tries hard, but it remains, at the most, an admirable failure. Maybe there’s some solace in the fact that at least its failures and frustrations are its own.