Some say that his use of the word 'spiritual' and invocation of the Bhagavad Gita mean that the superstar is planning to align with the BJP. 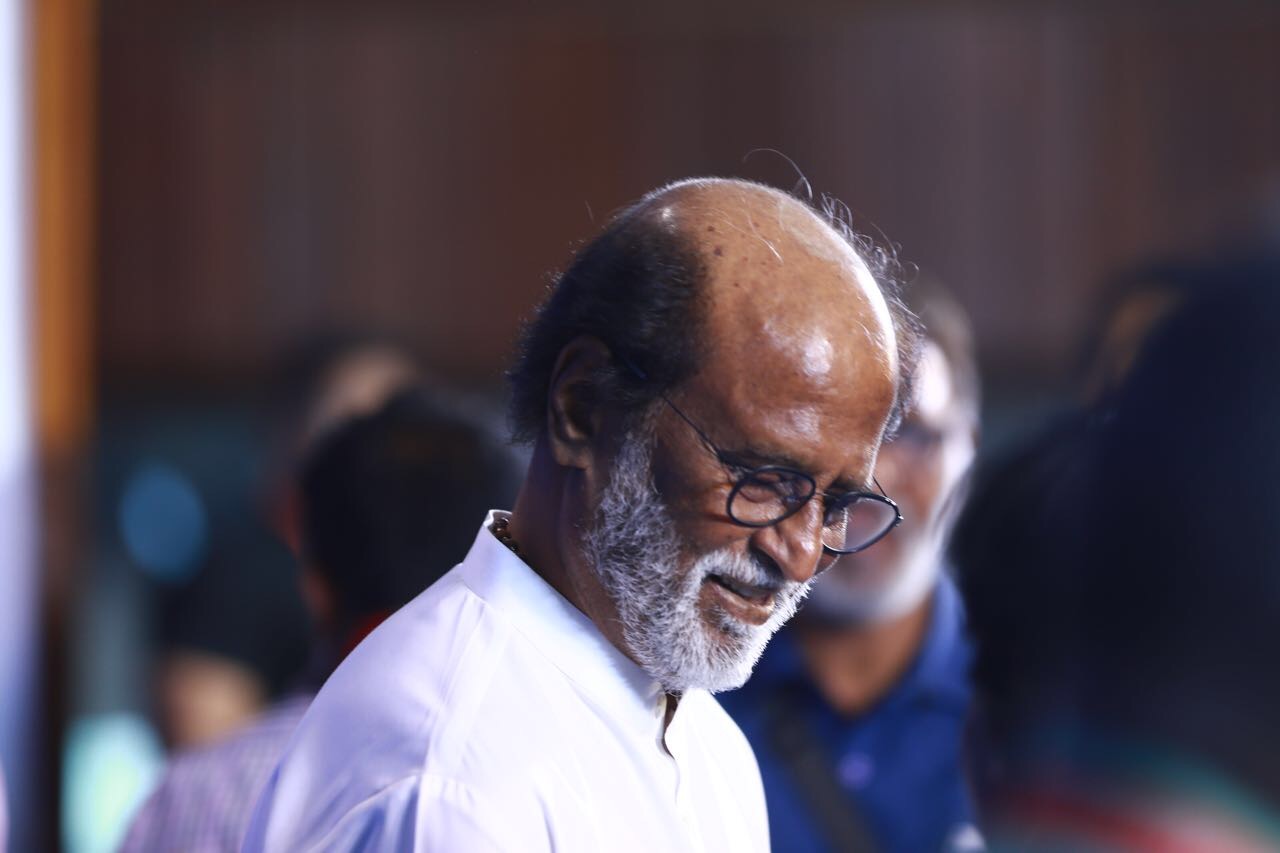 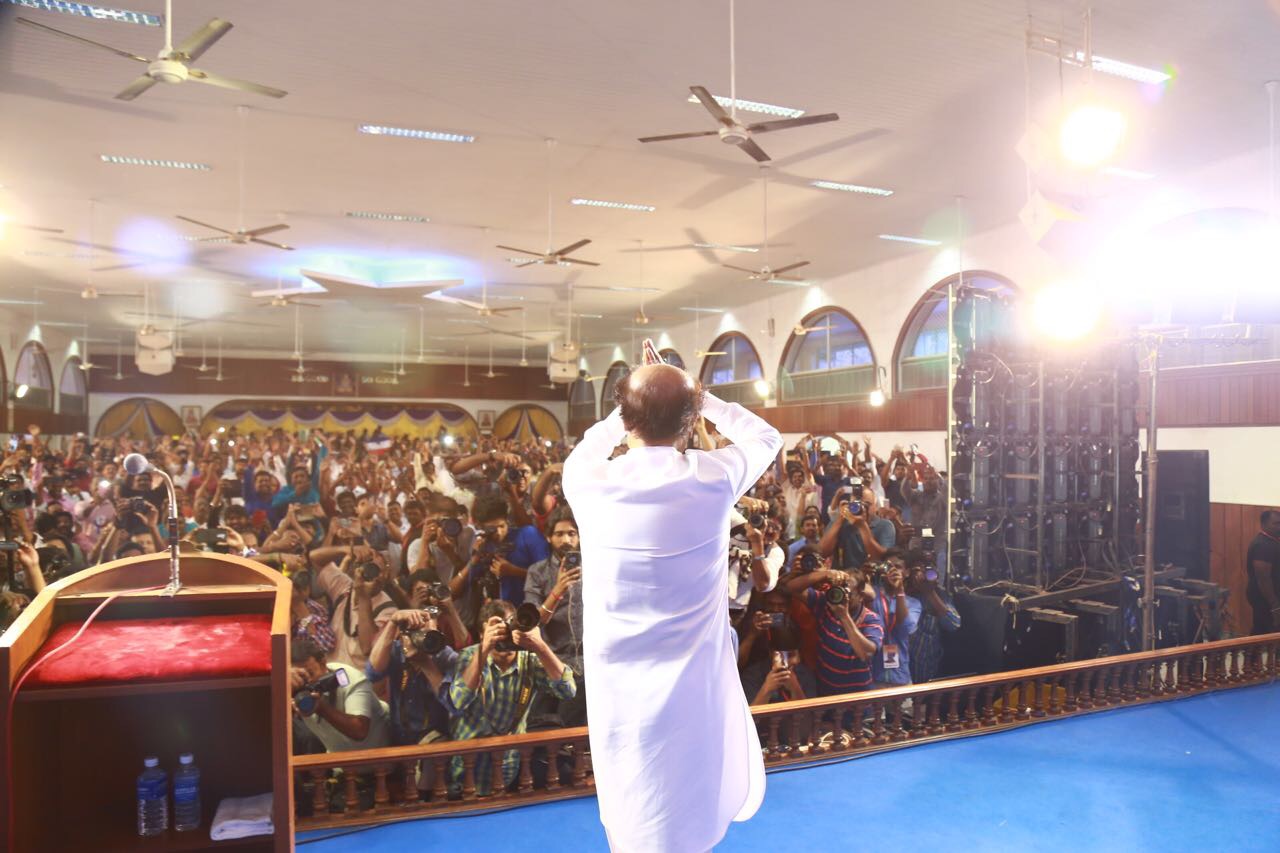 Chennai: “Let’s get to the point,” he says to the crowds that throng a quaint hall in the middle of Chennai’s Kodambakkam area. His voice reverberates across the hall, spilling onto the roads. If it is the voice of Rajinikanth, it must be met with crackers, screeching and hurrahs.

“Naan arasiyalil varuvadhu urudhi,” he says to raucous applause and cheers from the adoring crowd. Rajinikanth has confirmed that he will enter electoral politics.

Superstar Rajinikanth, fondly called Thalaivaa (leader), is a powerhouse, despite his weary, tired body. He takes to the stage and commands the audience, making a joke about his fear of the media. Rajinikanth said that it was time for political change and that he was entering the political arena now as he perceived a lack of governance in the past year in the state and also felt that democracy was being destroyed. “The political developments in the state over the past year have made us the laughing stock of the country,” he said. Rajini clarified – “If I were after power and position, I would have entered politics in 1996 itself. What I did not want at 45 years of age, would I want now at 65?” he laughed.

He added that his party would contest in all 234 seats in the next assembly elections in Tamil Nadu, at present scheduled for 2021, and that he would discuss the party’s agenda and strategy with his team. “No one needs to speak about politics except for me,” said Rajini firmly to his fans. “Let us not comment on other politicians or leaders.”

Rajini emphasised only two points during his speech. One was that of his not tolerating corruption. “We will resign if we do not deliver on our promises within three years,” he said. The other was a strangely worded phrase – “Jaadhi madham illaadha aanmiga arasiyal” – literally translating into “Spiritual politics without communalism or casteism”.

And this is what has set the cat amongst the pigeons, as far as the political fraternity is concerned. Political watchers feel that Rajini is the herald of the post-Dravidian era, the first would-be politician to speak openly of spirituality and religion. Tamil Nadu has, for the past six decades, been ruled by Dravidian parties, the Dravida Munnetra Kazhagam (DMK) and the All India Anna Dravida Munnetra Kazhagam (AIADMK), whose ideology is rooted in atheism and rationalism.

This phrase has also enhanced the perception amongst political analysts that Rajini and the BJP are flirting with each other. Political analyst Aazhi Senthilnathan says, “The word ‘spiritual’ in very normal terms can only be associated with a particular ideology, the pictures on his stage, the quote from Bhagavad Gita which he used in his opening lines, the invocation of late editor of Tughlaq magazine and political commentator Cho Ramaswamy – all point to the fact that he is associating with the (Bharatiya Janata) party, although subtly. It’s a disastrous move because he would only be a proxy for a communal political party.”

Other political parties are more cautious. “He has said that he will enter politics. He has not made his ideology clear. Unless he makes it clear, we cannot say whether his ideology is aligned to Dravidianism or against it. It is too early to decide,” says Avadi Kumar, spokesperson of the AIADMK. Kumar dismisses conjecture that Rajini could possibly be a pawn for the BJP. “Most say that the BJP is keen on piggybacking on Rajini and not the other way round. The BJP is trying its best to strengthen the party in Tamil Nadu,” he says.

This does not seem implausible, considering Tamil Nadu’s RSS ideologue S. Gurumurthy was quick to attempt ownership over the superstar soon after the announcement. “Rajni’s entry into Tamil Nadu politics will hopefully bring about tectonic changes in the 60 year old frozen Dravidian politics. His spiritual politics is nearer to Modi’s than to anyone else in Tamil Nadu or outside,” he tweeted.

But could Rajinikanth be the change that the people of Tamil Nadu seek? “Rajini’s brand of politics is not in tune with the overwhelming ideologies that the Tamil electorate subscribes to. He could be seen as an anti-Dravidian politician in that sense,” says Senthilnathan.

Manivannan also asks – “But assume he (Rajinikanth) says his politics is not Dravidian in a Dravidian population, then what does he represent? What is the post-Dravidian identity?” That is the million-dollar question that Rajinikanth is going to have to answer in the near future. 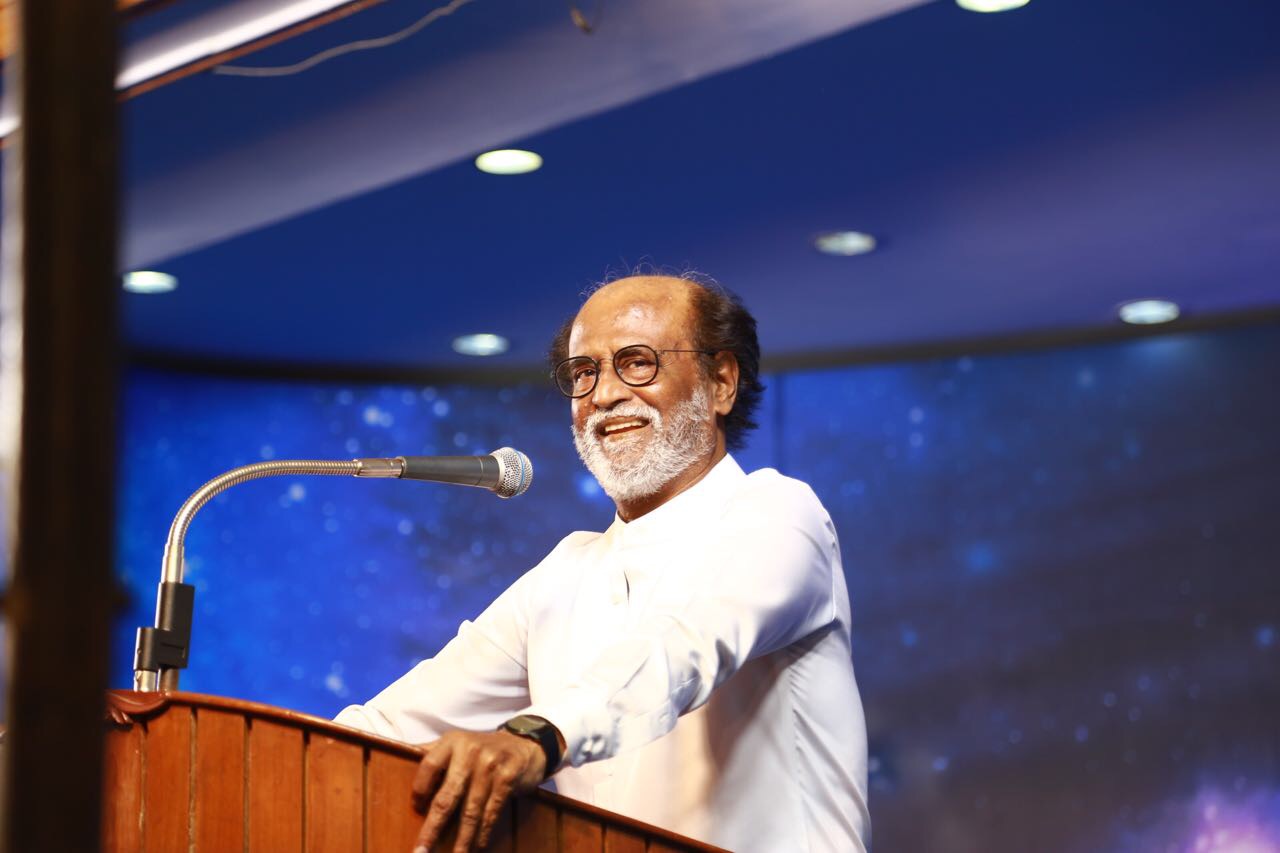 There has been, no doubt, a political vacuum in the state after the passing of AIADMK leader and late chief minister J. Jayalalithaa in 2016, especially with DMK chief M.K. Karunanidhi currently out of active politics due to ill health.

Rajinikanth appears to be making an attempt to tap into that perceived vacuum. “In the past year, there has been no governance at all in Tamil Nadu,” roared the actor on stage as fans cheered in a frenzy. And he has good reason to say so, although it has not been only one year of poor governance.

Unemployment rates had risen by 0.5% in Tamil Nadu in 2015-16 as compared to 2013-14, according to the employment and unemployment surveys conducted by the Union Ministry of Labour. Fiscal deficit of the state has risen to alarming levels and debt is at an all-time high.

“If he launches a political party soon and starts working for the elections, he may be able to manage 2-3% of the vote share in my view. These may be derived from the vote share of DMK, AIADMK and even the Congress. He could potentially make or break an alliance,” says Senthilnathan. “But remember, Chiranjeevi (former Telugu cine star and Praja Rajyam leader) was forced to merge his party with the Congress after three years. Sustaining a political party is difficult,” he warns..

Rajinikanth’s likely rivals are quick to dismiss even this role for the superstar. “Rajini will have to face much opposition and many losses. He may get some votes because of the impact of films. But he can never win,” says Nanjil Sampath, supporter of MLA T.T.V. Dhinakaran.

“We have seen many actors. We are not going to be intimidated. Let him first announce his policies,” says T.K.S. Elangovan, Rajya Sabha MP and a spokesperson of the DMK.

The 1990s were when Rajinikanth emerged as a formidable game-changer thanks to his massive fan following in Tamil Nadu. The first apparent instance of the superstar using this to influence the political course in the state was in 1996. Reports suggest that the actor was keen on campaigning for the Congress party if it ran alone in the 1996 elections, but dropped the idea due to the lack of enthusiasm shown by then Prime Minister P.V. Narasimha Rao.

When Tamil Congress leader G.K. Moopanar split from the party protesting its alliance with the AIADMK and floated the Tamil Maanila Congress joining hands with the DMK, Rajinikanth enthusiastically took their side. He famously said, “Even God cannot save Tamil Nadu if Jayalalithaa is voted back to power.” This, many believe, contributed to the AIADMK’s defeat that year. Many also point this out as a lost opportunity for Rajinikanth to have made an impactful political entry.

In 1998, the actor again extended his support to the same alliance, but with little impact. AIADMK meanwhile won 18 seats in the same election.

In 2002, Rajinikanth observed a nine-hour fast, leading a ‘people’s movement’ urging Karnataka to implement the Supreme Court ruling on releasing Cauvery river water to Tamil Nadu. The actor was spearheading a campaign to interlink the major rivers in the country, which he saw as a permanent solution to the issue. Notably, the fast was held a day after filmmaker Bharathiraaja taunted him for not participating in a protest organised by the film industry on the issue. Rajinikanth’s movement received massive support from the film industry and fans alike. But the actor maintained in an interview that he did not see himself as a ‘political leader or a statesman’.

When the BJP took up river interlinking as an agenda in the 2004 Lok Sabha polls, Rajinikanth pledged his support to the Vajpayee-led NDA, which had allied with Jayalalithaa by then. “I will vote for the Vajpayee-led BJP front in Tamil Nadu,” he had announced, adding that he would not ‘wrest the voting rights’ of his fans. But this time too, the actor’s support could not placate the electorate and the BJP-AIADMK combine could not win a single seat in the election.

In 2008, the actor participated in a rally organised to protest Karnataka’s stance in releasing water from Hogenakkal to Tamil Nadu. “It is a question of time and circumstances,” the superstar told his fans at a meeting the same year.

Rajinikanth’s meeting with Narendra Modi in 2014 had also sparked rumours of his political entry, though he quelled them by calling it a courtesy meeting. Since then, the BJP had reportedly intensified its efforts to rope the actor into its fold.

“He goes to meet former DMK chief Karunanidhi, former AIADMK chief Jayalalithaa, how does he talk about corruption? He enjoys the patronage of power. How can you bring corruption-free politics then?” asks Ramu Manivannan. To him, Rajinikanth’s vague statements on “spiritual politics” ring similar to a term coined by yesteryear chief minister M.G. Ramachandran, called Annaism – an amalgam of Gandhian, communist and capitalist politics. “No one,” he says, “wanted to question MGR and he was let off easily. But Rajinikanth needs to explain exactly he means.”

One thing is for sure. Thanks to Rajinikanth, religion and spirituality are no longer a bad words in Tamil politics.

Prathibha Parameswaran is a freelance journalist with The Lede in Chennai and has close to 15 years of experience in covering Tamil cinema. Divya Karthikeyan is an independent journalist based in Chennai.