It is important to look at how India's own film industry was filtering the stories of World War II through the prism of cinema.

Christopher Nolan’s film Dunkirk raised questions recently about the erasure of India from the war effort – any portrayal of Indian soldiers or reference to their contribution was noticeably absent. But even in India, the country’s role in the conflict tends to be overshadowed by the major events of the Indian independence movement that coincided with the war years.

Within this larger conversation about cultural retellings of the war, it is important to look at the how India’s own film industry responded and how it was filtering the stories of the war through the prism of cinema. 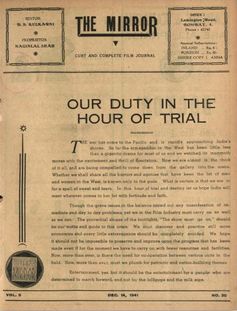 Editorials in film magazines such as The Mirror rallied the public to contribute to the war effort. Credit: National Archives

As an editorial in the December 1941 issue of weekly Indian film magazine The Mirror declared, the country’s film industry had a “duty in the hour of trial” to provide “entertainment for a people who are determined to march forward”.

Indian film journalism saw no reason to insulate its readers from the news of the war and looked at war reportage as part of its larger duty alongside covering the goings on of the Indian film industry and Hollywood.

A full-page illustration ran in the film magazine Picturpost in 1945 under the caption “Our War”, which depicted Indian civilians of both sexes marching behind a soldier, and proclaimed that: “when the Nazi gangsters let loose their war machine against the world, India took a proud place in the fight against aggression”. It also reminded readers that, despite the Nazi surrender, the war was not over until there was an end to hostilities with Japan.

The message of India’s solidarity with China and the Allies against the Japanese invasion was underscored in Dr Kotnis Ki Amar Kahani, directed by industry stalwart V. Shantaram. The film depicted the real-life experiences of five Indian doctors who volunteered to go to China as part of the medical mission during the Japanese invasion. Shantaram also starred in the film as the titular Dr Dwarakanath Kotnis, regarded as a war hero in China to this day.

The poster for the film, designed by renowned Indian artist S.M. Pandit depicts the Buddha, serene and still, standing amid the burning remains of war as a lasting image of hope and a reminder of historical cultural bonds between China and India.

The film refers to the medical mission as India’s “duty to help our neighbour” and depicts resistance against the war as a collaborative effort that could only be successful with unity among Indians – from the farmer reaping the crop, to the doctor volunteering at the front – a message with clear parallels to the nationalist movement against the British.

War and the independence movement

A five-minute progaganda feature called Face of India was commissioned in 1942 by the British government’s Films Division that would simultaneously highlight the Allies’ war effort and India’s role in it, reinforcing a positive narrative of the Empire.

The National Archives in Kew, London, have records of the multiple versions of the script which were drafted by British documentary maker and producer Alexander Shaw, who also headed the Indian government’s Film Advisory Board (FAB) which was tasked with making propaganda features in India.

Correspondence between officials of the Ministry of Information, the Films Division and the India Office reveal that no consensus could be reached on how the film could champion India’s role in the war without also addressing the growing civil disobedience movement in India against the British. In the end the film was shelved over fears that highlighting India’s role would only validate its right to self-rule. 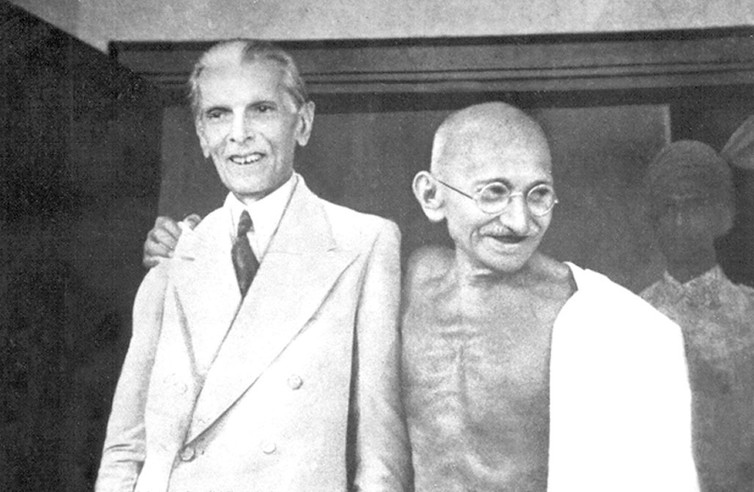 Gandhi, a hindu, and Muhammad Ali Jinnah, a muslim, were the focus of India’s independence movement which was at its zenith during the war years.

And there are the legacies that remain obscured in India itself, precisely because of the complicated legacy of the war within the history of India’s independence movement.

Born in Mysore, Sabu Dastagir, star of British productions such as The Elephant Boy (1937) and The Thief of Baghdad (1940), was not just the biggest Indian star in the world, he would also go on to be a distinguished war hero. Dastagir became an American citizen in 1944, joined the US Air Force as a tail gunner, and was awarded the Distinguished Flying Cross for his service.

However, Dastagir’s incredible cinematic and war legacy remains largely overlooked in the land of his birth, partly because of his roles in films such as Alexander Korda’s The Drum (1938), which was protested in India for offensive caricatures of Indians and was largely perceived as British propaganda.

His contribution to the Indian film industry remains a little-known footnote; Dastagir auditioned for a major role in Mother India (1957) – which would go on to become one of the most iconic Indian films of all time – and was turned down.

As these stories show, even in the midst of India’s own struggle against the British, the country shouldered its part of this momentous collective responsibility. The film industry in India chose to not be a mere spectator, instead seeking out a larger role for itself as messenger and ally in the global fight against fascism.

The importance of revisiting these stories is significant beyond the relationship between India and its former coloniser, Britain. Indian support for its Asian neighbours in their own struggles against fascist colonisation is also little remembered. India’s current relationship with China is presently framed through a border dispute in the Himalayas – but India’s wartime cinema shows that the bonds of solidarity are deeper and more lasting.

Shruti Narayanswamy is a PhD Student in Film Studies, University of St Andrews.

This article originally appeared on The Conversation.