How Tamil Filmmakers Are Making a Mockery of 'Social Consciousness'

Members of the cinema industry have only been constructing such narratives that will make it easier for film stars of the future to ascend into chief ministership.

Given the amount of inbreeding between politics and film, it is confusing that Pa Ranjith, an Ambedkarite, would allow Rajinikanth with his “spiritual” politics and his proximity to the Bharatiya Janata Party to play a Dalit Bahujan hero in Kaala (2018). Source: YouTube

It is widely held that the people of Tamil Nadu have a unique susceptibility to the silver screen. Not only confused outsiders, but also knowing insiders, wealthy enough to be detached from popular politics, have pointed this out as though it conclusively explains conclusively Tamil Nadu’s political present. This misconception, which is really a disguised way of calling a people “idol worshippers”, has made it as far the New York Times.

No one who has seen the fervour J. Jayalalithaa inspired can deny that we have a problem distinguishing between fantasy and reality. But who doesn’t? Fantasy structures reality; it is the basis on which we make sense of the world. The Dravidian movement realised this sooner than most and exploited cinema’s potential as an ideological weapon to mobilise the masses. It was through films like Parasakthi (1952) that the Dravida Munnetra Kazhagam was able to overthrow C. Rajagopalachari’s Congress government in the state.

From the beginning, these films glorified the movement’s leaders (Parasakthi ends with stock footage of Periyar, C.N. Annadurai and M. Karunanidhi giving speeches), staging calculated echoes between the way their imagined heroes acted and the way they acted themselves. To their credit, however, this was not pure self-promotion: they were genuinely committed to promoting the ideals of the self-respect movement.

This commitment disappeared with M.G. Ramachandran (MGR), whose rise to power represents the culmination of the method the Dravidian movement began to develop in the 1950 – of using cinema unto political ends. M.S.S. Pandian’s The Image Trap (1992) presents a detailed analysis of how MGR used film to attain and maintain power.

MGR’s example is the one current film stars with political ambitions (Rajinikanth, Kamal Hassan and Vijay) seek to emulate: promising in speeches that all that’s required to solve the people’s problems is a good and capable man while, on screen, they play good and capable men solving the people’s problems. Recently, Rajnikanth promised that he will rule as well as MGR did, although he has been trying to position himself as MGR’s successor since at least Sivaji (2007).

This is why – given the amount of inbreeding between politics and film – it is confusing that Pa Ranjith, an Ambedkarite, would allow Rajinikanth with his “spiritual” politics and his proximity to the Bharatiya Janata Party to play Dalit Bahujan heroes in Kabali (2016) and Kaala (2018, forthcoming).

In the same vein, Karthik Subbaraj’s next film, expected to release next year, will also star Rajinikanth and gives rise to similar wonderment.

Subbaraj used to work in the IT industry. He got the opportunity to make his first feature-length film through Nalaiya Iyakkunar (Tamil for ‘Tomorrow’s Director’), a reality TV show where his work displayed an unusual confidence with variegated, intricate plots. His first two films, the horror-comedy Pizza (2012) and Jigarthanda (2014), a film about the Madurai underworld, revealed a love of elaborate plots and a tendency to play with genre. His third film, Iraivi (2016), was no different in this regard but it possessed a darkness and edge the other two didn’t. It delights in the macho, in artfully staged gratuitous violence, but it is also shot through with a deep shame that points beyond the events in the film to the entire history of Tamil cinema. This was, Subbaraj admitted, an attempt to be a “socially conscious filmmaker”.

In more cynical hands, ‘social consciousness’ would have manifested as a monologue by a male hero, poised to deliver to grateful and admiring women the justice they have so long been without, laden with quotations from male national heroes (Subramania Bharati or Thiruvalluvar). In Iraivi, there is no cathartic resolution. Instead of drawing attention to its noble intentions, it dissolves them into its artifice. It is art, not propaganda. 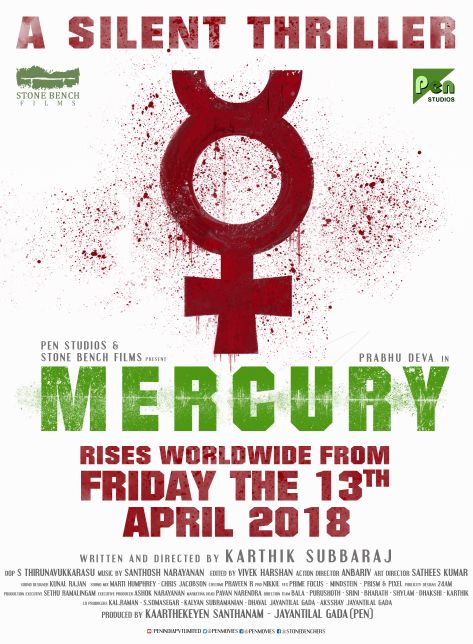 Subbaraj’s sound film Mercury was released on April 13, 2018. It is set in Kodaikanal, in a (not so) alternate future where the mercury factory, as well as the wider town contaminated with lethal deposits of the heavy metal, have been abandoned by its owner, Unilever. Mercury exposure has left the population hearing- and speech-impaired. The characters communicate with signs. The film focuses on a group of twenty-somethings – three men and a woman.

On a joyride in the hills late one night, the group accidentally kills a man, or so they think. The end credits inform the audience that the film is dedicated to “all victims of corporate greed”. Alongside the names of actors, producers, etc., viewers are presented with potted histories of other famous instances of corporate crime, including Bhopal and Minamata.

But this history of corporate crime only appears in the credits. In fact, even Unilever’s crime is barely engaged with. In the opening scene, the main characters are seen editing a video. Stills on their laptop show a stage. Mimes, violinists act and play in front of a black banner that screams “Stop poisoning us”. However, the first half is preoccupied with a romance between the woman and one of the men, and an accidental murder.

The film’s centrepiece film, a.k.a. almost the entire second half, finds the main characters lost in an abandoned factory (a sign above its gate says “Corporate Earth”), where they are being pursued by the man they thought they had killed.

But instead of thinking through its subject matter, the film has spent its energies thinking about how to maintain the pace and conventions of a thriller without dialogue. Subbaraj had only visual language to keep in suspense and shock his audience. He manages this with precise yet jolting cinematography and vivid and expensive set design. As a thriller set in a dystopian future, thrill is all Mercury has to do.

At the same time, dystopian fiction is not about imaginary futures in which the present is rendered barely visible; it is to distill contemporary crises out of their distractions and present them in more concentrated fashion.

We are inundated with stories of corporations exploiting the labour of entire towns and leaving them disease-ridden for generations. They show no signs of stopping, nor does it appear that they are being held accountable for their “corporate irresponsibility”. But to think about these events solely in terms of individual greed and callousness is lazy and risks perpetuating one of the more damaging lies that Tamil Nadu’s politicians have convinced their constituents of: that our material and social conditions are determined by the character of those in power.

They say that there is inequality and exploitation because the people in power are corrupt and that the system we have now would work if they had more integrity. The point of this lie is to keep the system that enriches the powerful untouched and, believing this to be the case, the people will push for “good” multinational corporations instead of fighting to be rid of them.

For Mercury to have been a seriously “socially conscious” film, Subbaraj had to have engaged with what systems or institutions that give corporations the leeway to act like this. Multinationals building factories in poor countries, where labour is cheaper and environmental law less stringent, isn’t a break with global capitalism; it is part of its structure. Subbaraj needed to have engaged with this structural aspect of the problem. He does not.

This criticism doesn’t apply to Subbaraj alone, but to all contemporary Tamil filmmakers. In 2016, Leena Manimekalai and Amuthan made the same point at an event held to discuss Visaaranai (2015), Vettri Maran’s film about police brutality in Andhra Pradesh. For all of its inescapable realism, they said, Maran hasn’t engaged with the demons that allow custodial torture and killing.

Tamil Nadu’s prevailing political orthodoxy mirrors the orthodoxy prevailing in our films. The latter tells us that everything that is wrong is so because those in charge are corrupt, selfish, callous. It tells us that all we need is a good and capable man in charge. And men who gave such speeches in the movies are starting political parties, giving the same speeches to crowds of fans and followers. Meanwhile, the institutions that are the real cause of the people’s suffering remain untouched. We desperately need filmmakers who can chip away at this logic rather than reproduce it.

Ashik Kumar is a writer from Chennai. He studies comparative literature at Columbia University.