How One Man's Efforts Made Colour Popular in Indian Cinema

Ambalal Patel was a pioneer and innovator in film processing who brought Gevacolor to India. 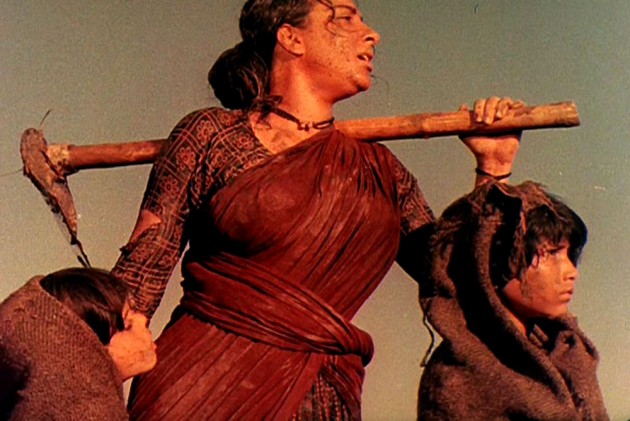 A still from Mehboob Khan's film Mother India, among the earliest films shot in Gevacolour

Soon after he had started Filmcenter Ambalal Patel realised he would also have to bring in the raw stock if he really wanted colour filmmaking to take off in India. In those days the monopoly for motion picture colour negative was with Eastman Kodak by virtue of the fact that they had been the first to develop and commercially market the first 35 mm colour negative stock: Eastman Color Negative film 5247, in 1950. A higher quality version, Eastman Color Negative film 5248, was developed and marketed in 1952. This was quickly adopted by Hollywood for colour motion picture production, replacing both the expensive three-strip Technicolor process and Monopack.

Before 1941, there was no colour stock; only colour processes like Kinemacolor (1908–1914), Technicolor processes 1 through 4 (1917–1954), and Cinecolor – all of which used one, two or three strips of monochrome film stock sensitised to certain primary colours or exposed behind colour filters in special cameras. Cinematographers used special cameras loaded with black-and-white separation stocks rather than colour negative. Technicolor was the first to introduce a colour reversal stock, called Monopack, for location shooting in 1941.

Ultimately it was a 35 mm version of Kodachrome that filmmakers began to use in standard motion picture cameras. Thus Eastman Kodak came to hold the monopoly for 35mm colour negative stock but it came at a price that was beyond the “small filmmaker” in India. Ambalal often said, “In this country when you say ‘film’, people immediately think Kodak. I am going to break that monopoly.” On his numerous travels abroad Ambalal had seen and studied the status of colour film. He knew that there were several alternatives to Kodak’s colour negative: Gevacolor in Belgium, Ferraniacolor in Italy, Sovcolor in Russia and Fujicolor in Japan. All of them were variations of the original Agfacolor which had emerged as a kind of war loot in the post-War years Agfacolor had originally been the German response to Technicolor and Kodachrome. Joseph Goebbels, the Third Reich’s Minister of Propaganda was a great admirer of Hollywood movies and examined them carefully in regular private screenings (sometimes with Adolf Hitler and his staff). Technicolor films then flooding the world markets made him realise that Hollywood feature films presented a threat to Germany’s internal market and that Hollywood’s dominance of colour film technology should be matched, at least if Germany was serious about entering in a cultural war with the U.S. and Britain.

Realising they were at least one year behind their American competitors, German technicians decided to steer away from Kodak’s approach to capturing colour images on film and invested in their own technology. Their work bore fruits in the summer of the same year, when chemical engineers of the Agfa company in Germany tested their new material Agfacolor at the swimming competition of the 1936 Summer Olympics in Berlin. It still took another three years––until July 1939––for the first Agfacolor film to emerge: Frauen Sind Doch Bessere Diplomaten (English title: Women Are Better Diplomats).

Gevacolor was the product of L. Gevaert & Co which had been founded in Antwerp, Belgium in 1894 by the famous Flemish industrialist Lieven Gevaert (May 28, 1868-February 2, 1935), who had committed himself to advance the status of the Dutch in Belgium. In 1920, the company was transformed to N.V Gevaert Photo-producten. During his numerous visits abroad Ambalal had visited the Gevaert Factory and Laboratory at Morstel, Antwerp, Belgium. He had seen the factory in its prime and again after it had been devastated by two major bombings during World War II. Ironically, much later in 1964, Gevaert would merge with Agfa AG to become Gevaert-Agfa NV and later Agfa-Gevaert NV.

So when he thought of importing film he began to negotiate with Gevaert for its Gevacolor stock. People thought he had gone mad to deliberately choose a film stock which, they thought, was inferior to Kodak. Gevacolor and other film stocks of its ilk were not without their problems. Even in U.K. where Gevacolor was being widely used it was. It was infamous for its instability and fading problems. The film was also fragile and heat-sensitive, which was a major problem in the typically hot climate of India. The film had to be stored in air conditioned rooms to protect it from deteriorating. The film had been tested under European climate and conditions and it did not always work in the tropical heat, humidity and brackish water.

Tests for Gevacolor began as early as 1950. Noted make-up artiste Ram Tipnis recalls that the Filmcenter technicians went all the way to Prabhat studio in Pune in order to test a long shot on Gevacolor only because the studio had many lights as well as generators. They also shot an outdoor close up in Pune. Tipnis seems to suggest that the outdoor light in Pune is stronger than the light in Bombay.

He also remembers that major tests for Gevacolor were carried out on the sets of two Filmistan films: Bombay Flight 470, which was being made with an all-British crew (released in the UK under the title Three Headed Cobra but never released in India) and Nagin (1954), directed by Nandlal Jaswantlal. While the first was to be in colour the latter film was only partially colour.

Ram Tipnis recalls that the first Gevacolor trial was done for a song picturised on Vyjayanthimala for Nagin. “Fali Mistry was the cameraman. We saw it the next day and it had a lot of yellow in it. So Mukherjee Saheb said let’s change the make-up and bring Jimmy Vining (who had earlier done the make-up for Kishore Sahu’s Mayurpankh and who was then doing the make-up for Bombay Flight 470). And because I really wanted to learn, I said okay no problem, let’s call him. On the third day, Fali Saheb came to me and said, ‘Tipnis we will do one more trial with Vyjayanthiji.’ But I told him, ‘But Mukherjee Saheb has said we have to call Jimmy Vining’. The large-hearted man that he was, Fali Saheb said, ‘No need, it is not your fault. It’s my fault. I took a little piece of film and went and developed, printed and corrected it. The make-up you had done yesterday was correct. Let anybody say anything, don’t listen to them. Just listen to me’. Do you know what had happened? There was a lot of yellow in Gevacolor so then Fali Saheb put filters and all that and reduced it. Therefore later we began to do pink make-up so as to kill the yellow.”

Recalls Tipnis, “[Gevacolor] film was very thin and had a yellow tinge. Being very slow, the film needed lots of 5 KW & 10 KW lights. If while shooting a 1% shadow was registered after exposing the film it would show up as a 10 % shadow.So, to avoid shadows, people would use very bright lights. But we soon realised that due to the bright lights the artists’ skin started burning and we needed to keep an ice box on the set and use Chamois leather.”

It was not as if there was no support from Gevaert in Morstel but the company had its own unique problems. Belgium,reeling after World War II, was slowly getting back on its feet. The country had lost so many of their young men during the War that there were no young employees. Men with expertise and experience had to be found to replace them. One of the first technicians to be sent from Gevaert was Walter Conix, a well-mannered gentleman – polite but ineffectual since he could never understand the Indian mindset. Filmcenter itself was facing teething problems and his inability to understand its requirements did not help matters. Besides, he was terribly lonely in India.

Conix did not last long and was replaced by Walter Seys who was a capable technician but a poor manager of men. His “Know-All” attitude was interpreted as patronising and it did not go down well with the Indian technicians trying to wade through the new technology. What made matters worse was his heavily accented English which was another impediment in communicating with the technicians and producers. To get him away from Bombay he was sent to Madras but to no avail. His behavior was always correct but somehow he rubbed people the wrong way.

Ultimately he returned to Belgium and was replaced by J.F.H. van der Auwera, a huge giant of a man, a chain smoker and a heavy drinker. He instantly fell in love with India and its people but his wife hated life in India and so, eventually she left the country and him! He was a casual haphazard dresser with a smile and a kind word for everyone. He quickly latched on to the mentality of the Indian producer who wanted everything yesterday – and, more importantly, tried to deliver the print for the Friday show.

He was not a formula technician but someone who loved machines. He would just roll up his sleeves and get down among the technicians to work on any bit of errant machinery. He worked manually, hauling machinery parts with his bare hands whenever there was a breakdown. This won him the love and respect of the people he worked with.

The first film he worked on was Mehboob Khan’s Mother India which had been shot on Gevacolor negative (but printed abroad by Technicolor). In fact, he is credited in the film (along with his predecessor Walter Seys) as Negatives Process Supervisor. His first independent film was Homi Wadia’s Zimbo (1958), after which there was no looking back. Every colour film made in India (and processed at Filmcenter) from then on carried his name either as Colour Consultant or Technical Advisor.

He literally worked on a hundred-plus films returning to his country in 1971. His last film credit was Reshma Aur Shera, released in 1972. A few years after his retirement he succumbed to a massive heart attack brought on by his immense weight, leaving behind several well-trained assistants and a grateful nation. Colour was well and truly entrenched in Indian films. Ambalal Patel’s dream had been realised though he was long gone and Filmcenter had lost its monopoly in colour processing with the setting up of Gemini Colour Laboratory in Madras in 1971.