High on Patriotism, Low on Artistic Freedom – When the National Anthem Played 37 Times a Day at IFFI 2017

When political connections matter more than qualifications or an interest in films to get a pass for the festival – it is clear who's calling the shots at IFFI. Ever since the International Film Festival of India (IFFI) moved to Goa in 2004, discussions have veered around the need for the country’s biggest and most extravagant film festival to have more autonomy, a weightier focus on parallel cinema and less of Bollywood. Just a few weeks into her mid-July appointment to the post, Union minister for information and broadcasting (I&B) Smriti Irani demonstrated little inclination for these concerns.

With the country caught up in the swirl of the engineered storms over Padmavati and I&B ministry’s trenchant stand on excluding S Durga from the screening list at the Goa film festival – despite the Kerala high court order – Irani ironically used Bollywood to strike back at the growing outrage over censorship.

The festival concluded last week on what would best be described as a deliberate ramp up of Bollywood glitz – a response most likely to actor Shabana Azmi’s call for a boycott of IFFI over Padmavati. From Shah Rukh Khan, who was at the opening event, to Amitabh Bachchan, Akshay Kumar, Salman Khan, Karan Johar, Katrina Kaif, Alia Bhatt – the list goes endlessly on – Bollywood’s A-listers scorched the red carpet in Goa like never before and even sat for a few media conversations.

“They’re here because of Smritiji,” a member of the Entertainment Society of Goa committee told The Wire when asked how much they were costing the state government which had picked up 75% of the Rs 24 crore tab for IFFI 2016. A former television actor and producer, Irani was best known for her presence in soaps like Kyunki Saas Bhi Kabhi Bahu Thi and the overwrought mythological series Ramayan on Zee TV.

But it wasn’t just the Bollywood deluge on the red carpet and the silence of its highest paid stars on Padmavati and the stonewalling of Sexy Durga – Shah Rukh Khan’s inaugural speech for instance sent reporters scurrying to the newsroom to figure out whether his rather innocuous comment: “…and no matter what your ideology is, storytelling and listening should be a familiar experience, which binds us all together, makes relationships stronger even in the face of dissent and discussion…” was actually a cryptic form of criticism of the controversies raging outside – that stood out at this IFFI. 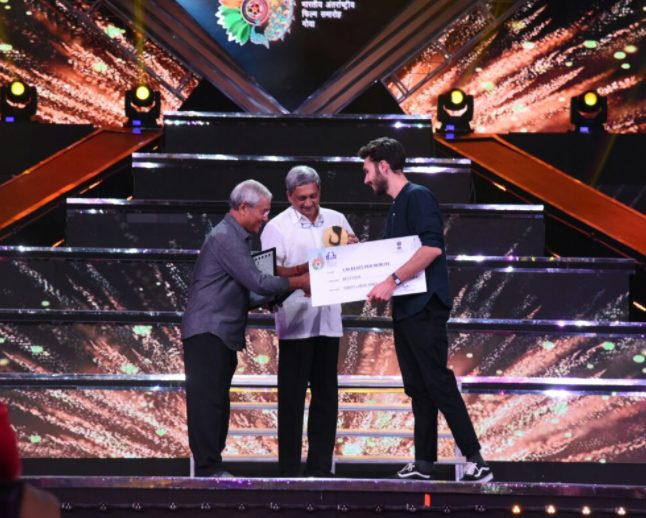 The incongruity of adhering to the national anthem mandate at an international film festival was never more apparent than when it played a record 37 times a day at the Goa fest. That many films a day – 37 at the festival’s peak – meant that many times delegates (some of them confused foreigners) were expected to jump to their feet, for fear of being prodded from behind or the side. In a few of the shows I sat for, ‘Bharat Mata ki jai’ followed the anthem. When the Supreme Court ruled on November 30 last year that the national anthem would have to be played before screening of films to instil the feeling of “committed patriotism and nationalism”, it had perhaps not considered the case of film festivals with an international audience.

IFFI had its share of good films and bad this year, with the bad frankly outweighing the good which reflected on the rushed decision by Irani to hand over the reins of the festival to the National Film Development Corporation (NFDC) just two months before the curtain raiser. The Directorate of Film Festivals, also under the I&B ministry, that had handled the event for four decades was relegated to a supporting role.

A whole retrospective, considered the meatier section of the festival, was wasted on showing nine James Bond movies – something one can catch every day on television – at a hefty cost to the IFFI budget. Among the outstanding films were the Oscar and Bafta nominated British director Sally Porter’s The Party, the Chilean film A Fantastic Woman directed by Sebastin Lelio and the Iranian Oscar entry for this year, Breath. Breathtaking in scope and the acting of its lead characters – half of them children – the film’s director, Narges Abyar, who travelled all the way to the India festival, was stranded in translation – the NFDC had made no effort to arrange an interpreter.

The number of domestic film enthusiasts in the Goa IFFI have grown exponentially over the years – probably something to do with easy mix of beer bars and films at the venue. But the vibe of the early years is clearly missing as foreign delegate participation thins out. Christian Jeune, deputy festival director of Cannes Film Festival told the Times of India he’d been left utterly unimpressed by politicians sharing the red carpet with the film fraternity at IFFI. Even though fully funded by their government, “there was absolutely no political interference” at Cannes, he said. The shoddy treatment of Malayalam filmmaker Sanal Kumar Sasidharan who made S Durga, and Ravi Jadhav who made Nude, shows who’s calling the shots at IFFI, where political connections matter more than qualifications or an interest in films to get a pass for the opening and closing events and films.