Anurag Kashyap, Dibakar Banerjee, Karan Johar and Zoya Akhtar have collaborated on another anthology – this time of horror short films. 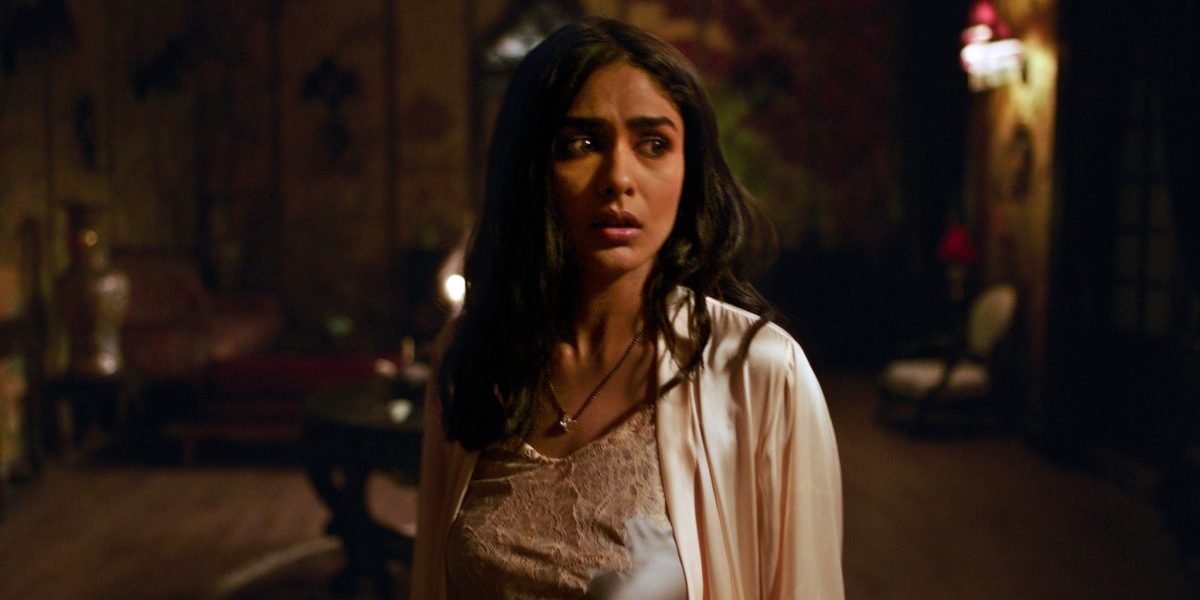 A still from 'Ghost Stories'.

Their earlier movies revolved around cinephilia and lust, while this recent release, as the name attests, deals with horror, a genre that Akhtar and Johar have not tried before – though technically neither have Kashyap or Banerjee, but at least their past films explored darker human psyches. It seems fitting, then, that Ghost Stories starts and ends with shorts by Akhtar and Johar: two ‘novices’ ushering us in and out of this world – a relatively risky endeavour in a film about fear.

Akhtar’s short, Nurse – opening with a scene comprising recognisable horror film tropes (an overcast sky, a woman standing alone in a vast landscape marked by distinct cawing, a hen dropping dead to the ground) – signals an amateurishly ‘spooky!’ intent, but soon relaxes to find a more natural rhythm. Here, we meet Sameera (Jahnvi Kapoor), a young nurse in charge of an elderly ailing lady, Mrs Malik (Surekha Sikri), who, battered by delusions, keeps calling out for her son, Armaan. He’s nowhere to be seen or heard.

Also read: In a Tumultuous 2019, These Four Hindi Films Brought Out Our Shared Humanity

Akhtar sets up compelling parallels between the two women: Sameera is attractive in the present, Mrs Malik was in the past. Sameera waits for her boyfriend, Guddu (Vijay Varma), Mrs Malik for Armaan. Both have suffered the consequences of familial abandonment.

Akhtar uses mirrors to depict these similarities. There are several scenes where Sameera sees her image – sometimes reflected in one, at other times in multiple mirrors. When she wears Mrs Malik’s brooch, and looks at her reflection, whom does she see: herself or her patient? Later, we see them sitting side by side, their images locked in a nearby mirror. Sameera and Mrs Malik have something else in common: the long, desolate hallway connecting their rooms.

Nurse is a story of morbid hope – of premonition – where Mrs Malik hears a doorbell before it’s rung, thinking it is Armaan (not too different from Sameera’s wish that Guddu will come to see her). The conceit of premonition is also built in the segment’s aural design: in several scenes, we first hear the sound and then see its accompanying visual. There’s also some cheeky wordplay (“Do you think I’m deaf” said by Mrs Malik sounds a lot like “do you think I’m dead”).

But despite these technical ingenuities – and attention to detail – Nurse, ending with a banal twist, doesn’t quite work. Akhtar has taken a small, affecting story and tried to force-fit it into the genre of horror. Somewhere between wracking the nerve and brushing the heart, her short loses its way.

Kashyap’s segment, Bird, is centred on a young pregnant mother, Neha (Sobhita Dhulipala), who babysits her nephew (Zachary Braz) during the day. Presumably by accident, the similarities between Nurse and Bird are remarkable. Both derive their dramatic mileage from a ‘failed’ childhood (Neha, we’re told, couldn’t be a good daughter; the karmic question, then, seems: is she even allowed to be a mother?), feature mirrors in key scenes, make frequent use of hallways and involve pain-alleviating pills.

Neha’s house has an attic, hosting a nest, a crow and a few eggs. Every now and then, Neha feeds the crow, in effect caring for the eggs. The parallels here, too, between the two ‘characters’ are quite evident: the stairs leading to the first floor seems similar to the small ladder attached to the attic. The crow, like Neha, is a mother-to-be. Neha, by caring for the crow, is trying to atone for her childhood sins. We appreciate the implication: the house is a nest, and Neha is the crow.

Many of Kashyap’s feature films work as excellent, isolated set pieces – where a good film form materialises with full force – but often fail to come together as a whole. The director, by that reason alone, should make impressive short films (and his piece for me, in Lust Stories, was the best of the lot). Bird, though, isn’t nearly half as impressive. You can pick and dissect, and be sporadically impressed by individual frames and stray strands of motifs. There’s enough ambiguity here to keep you guessing – is this a story of multiple miscarriages, of a distant oedipal bond, of a lifelong guilt – but it struggles to find a sense of cohesion. Bird, in essence, lacks an umbilical cord, continually connecting the audiences with the director: the filmmaker’s baby, as a result, is stillborn.

Banerjee’s segment, Monster, is more symbolic than Kashyap’s and is by far the best piece of the quartet. It opens to an anonymous man (Sukant Goel) – identified as “Visitor” in the end credits – entering a deserted countryside, Bisgarah (“Smalltown”). The place has just two survivors, both of them unnamed – “Little Boy” (Aditya Shetty) and “Little Girl” (Eva Ameet Pardeshi) – who detail the laws of the land. The Saugarah (“Bigtown”) people, Visitor is told, “ate the people of Smalltown”. To temporarily survive, the people of Smalltown began eating their own. The rules, as explained by Little Boy, are these: “If you move, you’ll die; if you speak, you’ll die; they don’t eat those who eat.”

A dominant society setting the rules for others, which, if not followed, can spiral into you getting lynched. These rules reduce people of Smalltown to non-people, worse than ‘second-class citizens’, who are forced to self-annihilate. The Bigtown people, in contrast, have become cannibals; moving zombie-like, they all look the same from a distance – a terrifying commentary on the perils of monoculture. (At the end of the film, we finally meet the ‘real’ people of Bigtown, who have nothing but disdain for Smalltown – especially Councilman (Gulshan Deviah), who asks Visitor, “Are you interested in history? Bigtown was once a touchstone mine. It was the capital of the state. We’ll be great again.”)

Monster is an excellent example of layered and symbolic storytelling. Using clever hints, Banerjee constantly sustains our interest. When Visitor enters an abandoned classroom, we see an incomplete map of India – with nearly its entire western coast, including Gujarat, erased – on the blackboard. In the next scene, Smalltown’s school principal is vomiting in the courtyard, standing near a tricolour drooping from a pole. A complex film, designed to inform by being obscure, succeeds not because it is difficult to understand, but because it invites multiple points of engagement and interpretations: it compels you to revisit the piece (a crucial element lacking in Bird).

Further, Monster has wonderful performances (Shetty, in particular, deserves praise for portraying a dubious boy with deceptive ease), even has flashes of humour and is marked by consistently impressive writing. It has some powerful visuals (especially of Visitor holding hands, begging for mercy from a bloodthirsty mob, which is disturbingly reminiscent of Mohammed Naeem, in Jharkhand, a few years ago). But a truly remarkable bit about this short is how it resists simplification, right till the very end, while still being riveting. We don’t even know its design: was it a dream or was it real? Perhaps a bit of both: a (bad) dream slowly becoming real.

Among all the filmmakers, Johar has perhaps had the most fun in the last two versions of this series. Unburdened by audiences’ expectations and producer’s demands – of making a blockbuster – he’s given himself space to breathe. His short in Bombay Talkies felt personal and poignant, while his Lust Stories piece was deliciously subversive and meta. Here, though, like Akhtar, he seems to be burdened by form, of making a ‘horror’ film, and as a result, his is the most trope-ey and disappointing segment of the lot.

Granny is about Ira (Mrunal Thakur), a young woman marrying an affluent man, Dhruv (Avinash Tiwary), who seems to have an unhealthy obsession with his (dead) grandmother. Dhruv needs her permission for everything; he wishes her good night, without fail, as a daily ritual. Even the housekeepers are in awe of the old lady.

Ira, quite justifiably, feels spooked and sidelined. It’s a very Rebecca-like set-up, the similarity finding echoes in story (replace the dead wife with the dead grandmother), characters (shifty housekeepers) and production design (a claustrophobia-inducing mansion). But Johar’s methods of invoking horror are painfully clichéd: characters shooting menacing glances, a door creaking open, the housekeeper standing with a flashlight held close to her face (even when the room is washed with light).

Johar gives us very little to hold on to, except brief flashes of meta commentary. I laughed out loud when Ira bursts into “fuck you granny” and, later, the granny returning the favour with, “Look at my fucking face.” A different decade, a different medium and an incredible amount of change: 2001, 19 years later, seems to belong to a different century now, when it was “all about loving your (grand) parents”.