Why It's Necessary to Remember George Reddy

George Reddy, murdered by right wing forces in the 1970s when he was only 25, remains an inspiration for thinking youth even today 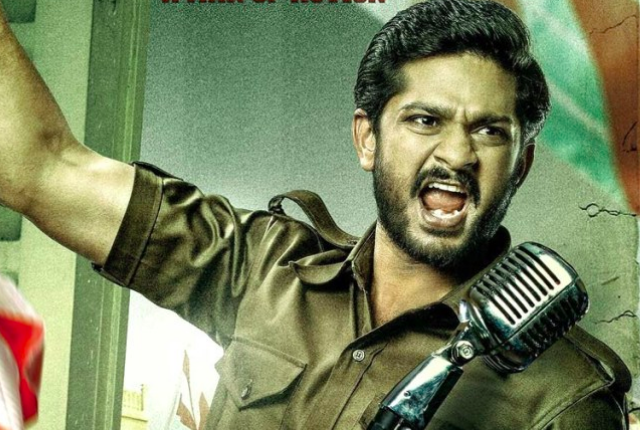 A detail from the poster of 'George Reddy'.

I watched the Telugu film George Reddy with a lot of curiosity.

It was released on November 22, 2019 and is based on the life of the famous Osmania University student leader George Reddy who was murdered by right-wing forces on April 14, 1972. He was a gold medalist in nuclear physics and was doing his PhD at the time of his murder.

A believer in pro-poor socialist ideas, he fought for the rights of the poor and women students, both on campus and outside. Within a short time he became a legendary figure. So much more the reason why pro-feudal right-wing forces got him murdered on the campus itself.

The film, produced by Sudhakar and directed by Jeevan Reddy captures the spirit of the times and his many ideas . The makers have skilfully recreated the Osmania campus of the 1970s.

Somewhat predictably, the Telangana wing of the Bharatiya Janata Party deployed its firebrand leader Raja Singh to oppose the release of the film. They tried various means, including approaching the court, but the release went ahead. It is now running well in both Telugu speaking states.

I was one of those people who were influenced by his serious academic scholarship. I joined my M.A. Political Science course in 1974, just two years after his brutal murder. The Arts College at Osmania University, where I studied, became the main attraction and stood as a symbol of the scholar’s activism, even though he was a student of physics. His college is slightly away from the Arts College building.

However, this Arts College was the centre of political discourses and activism, even though it was a testament to the magnificent Nizam’s feudal architecture.

The ideology of George Reddy endured among students and was unsurpassed by any other figure in the two immediate decades since his death. No teacher or scholar influenced the campus’s intellectual environment as he did.

How could a 25-year-old youth do that even without writing much?

His appeal lies in three things: 1) acquiring knowledge as a weapon, 2) using it for liberation of the oppressed within that short time, and 3) getting martyred by the oppressors’ men.

When very young persons stand for justice and display knowledge of uncommon values and stand for human equality, civil society looks at them with awe and disbelief. The feudal ruling forces around them see them as a danger. This is what happened in the case of Jesus Christ and so many more thinkers. Christ’s contemporary rulers and spiritual authorities got him crucified, though he did not use any violence in his fight for justice for the poor and oppressed.

Several decades later, another student in Hyderabad arose. Rohith Vemula did not use violent methods to fight for justice. He killed himself as Socrates did at a very old age. Bhagat Singh was killed and George Reddy was also killed.

The film has successfully transformed the story of George into a mainstream narrative that has captured the public imagination. It has contemporarised George’s budding socialist-revolutionary ideology into a pro-poor, pro-lower caste and farmer’s suicide campaign, with a heroic smattering of emotional fights with political, anti-social and casteist ideologies.

The anti-serious educational agenda of the state is an issue that plagues many campuses even today.

Mediocre and forces with a lot of muscle power within and outside the student populace thrive–George was a negation of all such forces, both in the realm of scholarship and in physical fights. The film captures that personality of George very well all through.

George Reddy in the 1970s and Rohith Vemula in the 2010s inspired thousands of students on the university campuses across India for similar reasons. George Reddy was murdered when he was just 25. Rohith Vemula hanged himself in protest against similar human oppressors on in 2016, when he was just 26. Both of them have something common in their socio-spiritual and cultural roots — the belief that oppression is unethical, anti-social and that they need to fight for justice.

Both George’s mother Leela and Rohith’s mother Radhika fed them on a deeply spiritual ethic.

Though the film used the ongoing farmers’ suicides to showcase George, in the 1970s, his family’s ethics of sympathising with the oppressed and poor was in tune with the socialist waves that were sweeping the world. The impressive Super Power status of Soviet Union in the Cold War period, the ongoing cultural revolution in China, the Cuban revolution under the leadership of young Castro and Che had a huge impact on him.

The pro-Vietnam and anti-American campus movements all over the world posited themselves as a significant mediator between democratic civil rights and socialist campaigns. Sharp intellectuals were getting drawn into serious classroom and library studies and street activities. George’s unusual energy came from that source. This energy of George inspired many of us. But not a single one after him combined both the spirits. Many of his followers went into the Naxalite movement and some took to serious studies achieving only partial success. No one of us made a great mark after him in any field, though a few of us attempted, in separate spheres.

Because few rare humans do such powerful things at such a young age, they are seen as miraculous beings. There is a spiritual saying that ‘God puts a different seed in exceptional humans’. Science, arts and morality operate through them.

Indian biographic heritage has hardly textualised the life of such exceptional martyrs. Indian cinema also is loathe to grow out of the maya of song and dance. A regional, small budget film took this experimental step.


What is very impressive about the film is that it has concentrated on George’s distinctive childhood. He took everything positive and humanistic from his mother and went beyond her imagination to follow his own instinct. The nurturing of that instinct socially, culturally and spiritually is very important.

From family to school to university, providing encouragement for that creativity, goodwill and intellectual rigour is very important. The Indian civil societal ethos has a tendency to kill such exceptional human combination, either by killing the entire persona or by killing the main spirit in such persons. Once that spirit is killed, one would not make history.

There is an ongoing attempt to see that such sharp minds do not come up on campuses.

Any conservative living environment, be it a family, school, university and so on, will not allow creative experiments. Those young people who want to experiment with new things need to rebel against anything conservative.

Rebellious minds need to be negotiated with, not suppressed. The nation will lose their game changing mental abilities if they are suppressed. Any young George budding in any corner of of the nation should be nurtured. To start with, this film should be dubbed into all languages for all kinds of audiences to see.

Social activist and author Kancha Ilaiah Shepherd is a political theorist who taught at Osmania University till 2012.