Review: 'Eeb Allay Ooo!' Is a Satire Whose Heart Beats for the Marginalised

Migrant lives can get dehumanized in a world that sees them just as machines. 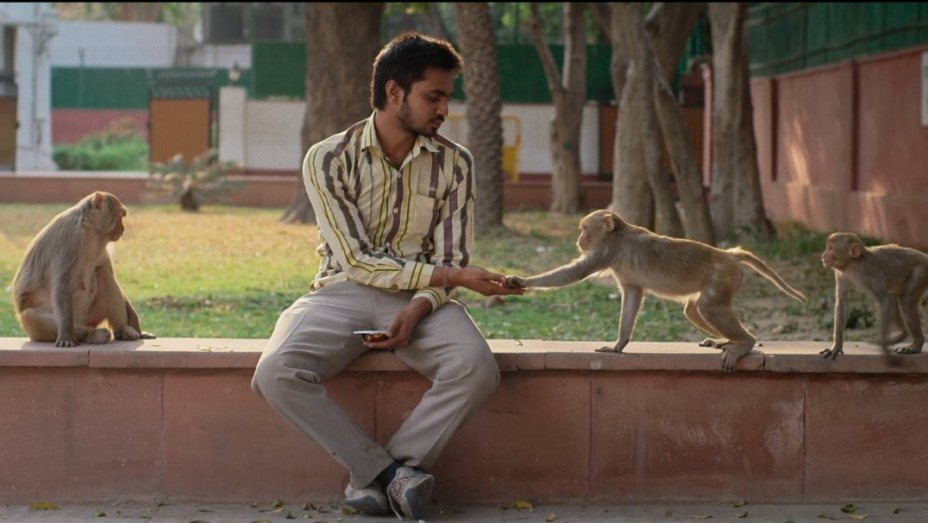 A still from 'Eeb Allay Ooo!'

A man and a monkey, in Lutyens’ Delhi. Man proposes, monkey disposes. The man calls, distracts, threatens: the monkey stays put. He jumps, squeals, shoos: no difference. It’s a live broadcast of different stages of grief. There’s denial and anger, despair and bargain. The man accepts and moves on; the money stays. It’s a bright afternoon, the country’s most hallowed corner resembles a jungle, where a man has become a monkey.

That man, Anjani (Shardul Bhardwaj), a recent migrant to Delhi, is just doing his job. He’s a professional ‘monkey repeller’, stationed outside government buildings – Rail Bhawan, Vigyan Bhawan, Nirman Bhawan – so that the sarkari babus can work undisturbed. In a democracy, all people are equal, but some more equal than others; In Indian democracy, though, not all people are even people. Prateek Vats’ debut, Eeb Allay Ooo!, which recently played at YouTube’s We Are One steaming event, sets up a fascinating, unsettling premise: it pricks Darwin’s theory of evolution.

Anjani got this job, because it was the only job available – and the only one he could do. He hasn’t finished school, can’t cook, can’t drive: he can’t ‘serve’ the city slickers in any useful way. His home state, presumably Bihar, had nothing for him, and Anjani has nothing for the city. That makes him uniquely homeless, a man resembling a milestone, a desperate in-betweener. The motif of transition – of constant movement and tiredness – runs throughout the film. Anjani takes long metro rides to work. Several scenes have shots of passenger trains moving past level crossings, carrying with them thousands of Anjanis: invisible people from an invisible nation.

Even though Anjani is the main character, Eeb Allay Ooo! broadens its canvas, telling the stories of his brother-in-law and sister: migrants turned settlers. His brother-in-law works as a security guard. The pay is modest, and a possible increment of Rs 1,000 means a lot for the family. But that comes with a catch, for he’ll have to own a gun – a condition that distresses his pregnant wife. The brother-in-law is where Anjani would like to be – well-settled, connected, married – yet Eeb Allay Ooo! shows the outcome of that success: less pay, limited upward mobility, casual dehumanisation by his boss. A life that keeps crunching him in a corner, a life where surviving is winning. Seen from that viewpoint, Anjani fighting with monkeys feels discomfiting; the binaries of his life – the chasm between expectations and reality, appearance and feeling – seem relentless and cruel.

Cinematographer Saumyananda Sahi depicts that contrast well. Anjani’s workplace, Lutyens’ Delhi, is captured through long and wide shots – admiring the country’s iconic buildings, Rashtrapati Bhavan and India Gate, from afar, exuding a sense of magnificence. His home on the other hand, which he shares with his sister and brother-in-law, is cramped; the shot lengths are longer here, making you as suffocated as the dwellers. The camera is a silent, inquisitive presence around the monkeys – following them climb electric wires, jump on ledges, stand on sheds – making this fictional feature cinéma verité.

Also Read: ‘Gulabo Sitabo’ Drifts Along, Picking Up Some Rhythm Only Towards the End

Eeb Allay Ooo! is primarily a funny, penetrating satire. The scenes of Anjani struggling with monkeys are underpinned by grave misfortune, but they’re overshadowed by absurdity and inanity. Further, the set-up – a hapless young man, the people in power, monkeys – provides ample scope for social commentary. At one point, you hear, “Raisina Hill is ruled by monkeys”, a dialogue that could be true one way or the other. Then, of course, there’s Hanuman. Unlike Anjani, some people outside the government buildings feed the monkeys, for they feel they’re serving the god. Worshipping gods but deriding people – a constant expression of Indian reverence and indifference, a reality so ubiquitous that it’s terrifying. It’s quite telling in fact that the current state of the country can be summed up in six simple words: ‘the government, god, and marginalised citizens’. Eeb Allay Ooo! circles around each one of them.

But the best and most affecting portion of the movie centres on Anjani navigating the city: asking people for jobs; hanging placards, listing his name and phone number, in front of houses; falling in love with a woman; exploring a softer side of the city with her. It’s a refreshing change, because our films treat the migrant workers the way we treat them: as service-providing machines; machines that should stay silent and invisible, machines that should work and evaporate. But Eeb Allay Ooo! cares, lifting the migrant from the trappings of political abstractions, dignifying his fight and making him a person. 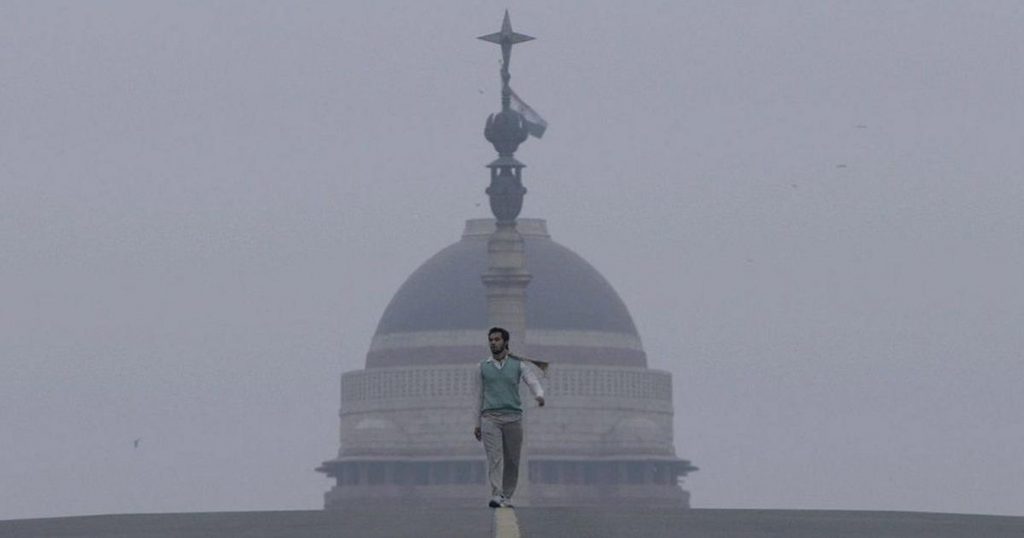 A still from ‘Eeb Allay Ooo!’

The movie is also a nuanced commentary on success. For a country battling the eternal postcolonial condition, success is often equated to escape – or any state that doesn’t suffocate or enslave. For the upper-middle class, that could be America; for the lower-middle class, that could be an Indian metropolis. Eeb Allay Ooo! understands this obsession with destination. Anjani’s sister feels proud that her brother does a “government job”, and in a way she’s right. It’s another matter altogether that Anjani loathes it and desperately craves another escape. The business of life then becomes a cyclical beast. Makes you shuttle from one place to another, no permanency, no solace; a person becomes a bus stop.

The acting is impressive across characters, but Bhardwaj’s performance is particularly memorable. He nails the grand and the minute: moments of mischief and curiosity, of sincerity and despair and desperation. There are so many Indian expressions – sentiments between sentiments – that don’t come on screen, because Hindi cinema mostly believes in a final product. But Bhardwaj’s vocabulary, mimicking the man he plays, is one of constant search; the result is spellbinding.

Eeb Allay Ooo! is a sharp condemnation of the Indian state, but it’s not angry or bitter. Those emotions are reserved for people who have agency, people who are considered… people. The movie instead offers disenchantment and dejection, wrapped in absurdist whims. Stranded between two jungles – populated by literal and metaphorical animals – the migrant worker is once more in a state of transition: the journey is a joke, the destination a cruel, consolation prize.