Director of Ka Bodyscapes, Denied Certification by the CBFC, to Move High Court

The film was denied certification because it has "sensitive gay scenes, use of derogatory words against women and vulgar dialogues". 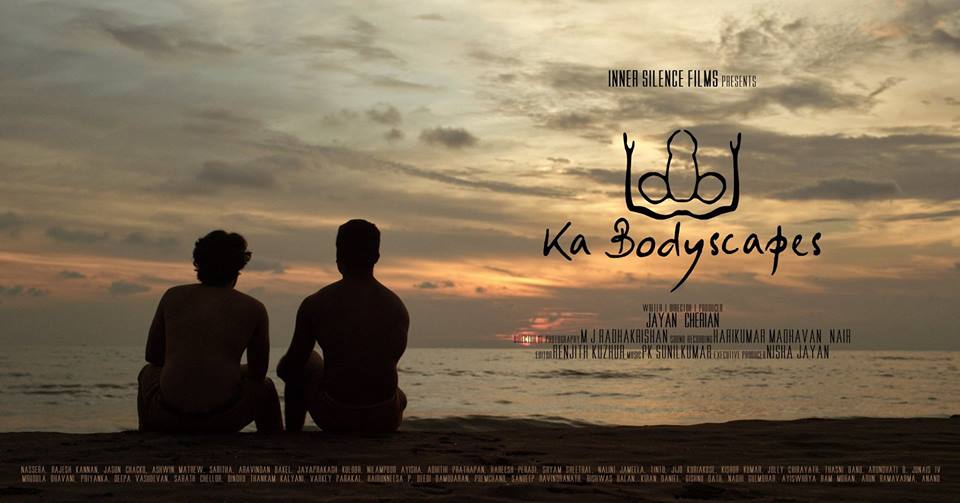 The Poster for Ka Bodyscapes The Poster for Ka Bodyscapes

The producer and director of the film Ka Bodyscapes, Jayan Cherian, has said that he will move the Kerala high court against the Central Board of Film Certification’s (CBFC) refusal to certify the public screening of the film.

Ka Bodyscapes, which is set in Calicut, follows the lives and struggles of three characters. Writing in Kafila, J. Devika describes the setting and characters as such:

Misogyny and homophobia have touched new heights in an ageing, middle-class-dominated society where growing Hindu right-wing mobilization, and the rise of predatory capitalism now erodes civil liberties of the young, men and women of all communities, and workers’ rights. In this bleak socialscape, three young people – Haris, a free-spirited gay painter; Vishnu, a rural kabaddi player from an upper-caste, conservative Hindu family and Haris’ object of desire; and Sia, a Muslim woman who belongs to a traditional aristocratic family, fast descending into penury and an activist who fights patriarchy in the family and the factory – struggle to find space and happiness. The film explores their quest for freedom and rebellion.

The film was denied clearance by the CBFC in April this year saying the film contained “sensitive gay scenes, use of derogatory words against women and vulgar dialogues”. At the time, the CBFC did not give Cherian a rejection letter; instead, it referred the film to a revising committee.

On July 25, Prathibha A., regional officer at the CBFC’s office in Thiruvananthapuram, wrote to Cherian, saying that the film was being refused a censor certificate because the revising committee “felt that the entire content of the Malayalam feature film Ka Body Scapes is ridiculing, insulting and humiliating Hindu religion, in particular portraying Hindu Gods in poor light. Derogatory words are used against women. The Hindu god, Hanuman is shown as coming in the books titled I am a Gay and other homosexual books.”

Responding to CBFC’s objections to the film, Cherian told The Wire, “We feel that CBFC’s decision is biased against the sexual orientation of the characters portrayed in the film and the LGBT community of Kerala who made this film possible with their support.  We believe that we have a right to make our films according to our artistic conventions, and we are not ready to take any editorial advice from the state. We are planning to move to the court to challenge the CBFC’s decision. It is unfortunate that CBFC is being used as a tool to propagate homophobia and sexual bigotry.”

Responding specifically to the CBFC’s claim that the film is misogynistic, Cherian added, “Ka Bodyscapes is a movie that severely critiques the misogynistic traits of our society and vocal against gender oppression. The movie has references to various struggles led by women’s right activists in Kerala in recent past. Several activists who participated in those struggles are part of our writing/directing team, and some acted in the film as well. So the CBFC’s claim of the movie being anti-women is baseless.”

Taking strong objection to the CBFC’s censorship of art and literature, Cherian said, “The CBFC states that we are showing Hindu god, Hanuman, in a bad light. It is not true, the central character in the film is a painter, in one of his paintings he portrays his lover flying with a heap of books, like the mythical Hanuman figure, carrying the mountain. There are many titles from gay literature among the books, and the face of the figure is clearly another character in the film, not ‘Lord Hanuman’. This is an original painting by artist M.M. Manjesh, who painted exclusively for the movie. It is surprising that the CBFC is offended by a painting and book titles shown in a film.”

This is Cherian’s second film. His first, Papilio Buddha, which explores Dalit agitation in the face of exploitation and displacement by the state, was also initially denied clearance by the CBFC. The CBFC relented and gave the film certification only after its makers agreed to mute a speech by Ambedkar and blur a few scenes.