Courageous and Pertinent, 'Kaala' Asks All the Right Questions

What the story lacks in writing, it makes up for in precise, controlled direction. 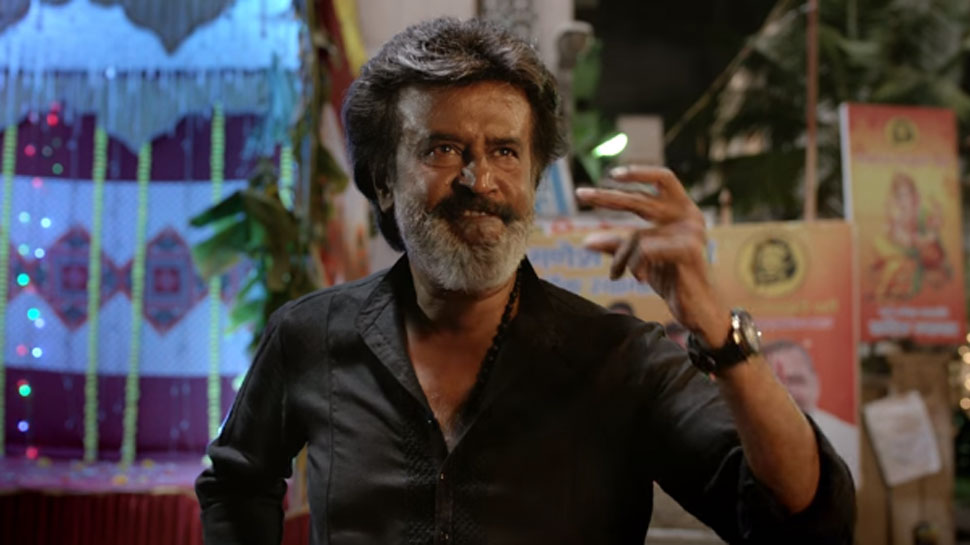 A still from the movie 'Kaala'.

Kaala introduces its hero, Kaala (Rajinikanth), a veteran “rowdy”, in a cricket match. His team needs two runs to win, and he’s on strike for the final ball. In nine out of ten Rajinikanth films, the star would have hit the ball out of the ground, securing a triumphant – and expected – win. But Pa. Ranjith’s Kaala is that tenth film, a truant amid frontbenchers. So Kaala swings the bat and the ball rattles the stumps. Kaala loses but Kaala wins, confidently implying that a film needn’t always serve the star. Because in a movie like Kaala, a political drama, which is most interested in probing the rigid structures of power – its codes, customs and aesthetics; all apparent yet somehow elusive – it is only fair, in fact essential, that its first line of inquiry should begin from the bottom.

The film opens to crowded bylanes of Dharavi, with a voiceover detailing the struggles of its inhabitants, the “urban poor”, who were jotted on the margins of the success story of Mumbai and just like that, with the flip of a page, forgotten. Numerous buildings will come up in Dharavi, its denizens are told, bringing modernity and prosperity to their lives. But its people don’t want a 225-square foot cell masquerading as advancement; they want their own freedoms. This kind of story, pitting the avaricious businessmen against the pauper slum dwellers, is not new to Indian cinema. But Kaala isn’t lazy to rely on the old tropes of an old story. Instead, much like its hero, it finds ways to recast the old, giving it fresh purpose and meaning – more importantly, a new identity.

It does so by first smudging the difference between the oppressor and the oppressed. In the battle between the slum dwellers and the builders, Kaala, quite obviously, supports the former, but his son Lenin (Manikandan) and his girlfriend Charumathi (Anjali Patil), who care for Dharavi and its people, see social benefit in the rehabilitation plan. Besides, Kaala’s ex-girlfriend, Zareena (Huma Qureshi), an NGO worker with relevant work experience, has been especially called for this project. The builder too, briefly appearing in a scene, isn’t a stereotypical baddie. He says that he’s taken all the permissions, adding that he too has a family to sustain. Ranjith allows his characters, no matter how small, to hold their grounds, asserting their wants and needs. Kaala comprises crests and troughs, like the fates of people in a metropolis; they are not flattened, or rendered inanimate, by the whims of a star.

Moreover, unlike most Rajnikanth actioners, here, the violence is restrained. Even in an early intense exchange between Kaala and the police officers, a big fat stick lying by his feet remains unused. It’s a smart decision; the anticipation of violence in a film like this feels more discomfiting than the violence itself. In fact, Kaala isn’t involved in a major fight almost till the first half. And when he does, Ranjith imbues that scene with poetic eloquence, with an umbrella assuming the role of a sword, the rain lashing hard on a Mumbai over-bridge. But even here, the filmmaker is alive to the rhythms of life. Shortly before the murders, Ranjith moves the camera backwards to show us the complete picture: ordinary people caught in traffic on a rainy day. Ranjith isn’t rewriting the rules of the game here; he’s just found himself a different playground.

Kaala’s villain, Haridev Abhyankar (Nana Patekar), a powerful politician, enters the film pretty late – not much after its hero reveals his dangerous side. And like all riveting dramas that can be understood through their dark hearts, Hari holds an important piece to this puzzle. He belongs to the Navbharath Nationalist Party, wants to make Mumbai “clean and pure”, has proposed a plan called Digital Dharavi, and is, quite crucially, always dressed in white. At one point, he is also accused of being fascist. Kaala derives its true power – its ability to question and unsettle us – from Hari, for he, unlike other antagonists, ticks all the superficial traits of a progressive politician.

The difference between who Hari (Abhyankar) is and what Kaala never will be – in fact never allowed to be – is the main source of tension in the movie. The conflict here is not just personal; it is local, national, generational – it cannot be erased or ignored or forgotten. The tension persists even in the absence of imminent conflict. It is in the way they dress: Hari in white, Kaala in black. It is in the walls of Dharavi, painted with pictures of B. R. Ambedkar. It is in the slogan of Kaala’s friends: “Jai Bhim”. It is there when Kaala is about to be served water at Hari’s house – you wonder about the type of glass, would it be stainless steel or a transparent glass? Even if Kaala is the worst of enemies, is he at least considered a person?

But the beauty of Ranjith’s precise, controlled direction is that he never needs to underline the obvious. It also rings true because much of our daily conversations about religion or caste – or any other imposed markers of identity – hardly bear their names; reality, whether pleasant or bitter, doesn’t need to be verbalised. But there is one inspired sequence where Ranjith outdoes himself, going full-throttle. It comes late in the movie where Hari’s henchmen, after having infiltrated Dharavi, are massacring Kaala’s friends.

This scene is intercut with a pooja at Hari’s house, where a priest is reading verses from the Ramayana. We’re told that when Lord Rama chopped one head of Ravana, another one came in its place. Cut to: one resident of Dharavi getting murdered but there’s always another one ready to fight. Earlier in the film, in a conversation with his granddaughter, Hari says, “Rama will kill Ravana – who can refute Valmiki after all?” Back to the pooja at Hari’s house: The priest continues telling the Ramayana story, saying Rama had to chop 100 heads of Ravana. Cut to: the massacre in Dharavi, each new murder giving rise to a new face, a new head – a new Kaala.

The writing, however (by Ranjith and K. Makizhan), could have been more polished, elevating the film to impressive heights. Kaala and Zareena’s animated backstory feels abrupt and clunky. The romantic subplot, involving Qureshi and Rajinikanth, fails to work, looking like a silly crowd-pleasing effort (mainly because the two actors lack spark, which could be attributed to the difference in their ages, which the film badly tries to overcome – by adding a few streaks of grey to Qureshi’s hair (no it doesn’t work)). The social media campaign in this film too, like nearly every other Indian film, goes ‘viral’, mobilising thousands of people – a highly convenient plot point that is neither original nor real. Some powerful scenes – such as the one between Kaala and Hari at the latter’s house – are let down by an abrupt suffusion of dialogues. Rajinikanth’s acting lacks the depth that makes a poignant scene memorable. Most songs seem shoehorned into the plot.

Kaala is sporadically uneven and marked by flaws. It could have immensely benefitted from a solid relook. Yet at the same time, it is courageous and pertinent, placing a star at the centre of its story, asking all the right questions, dislodging many prejudices. Indian mainstream cinema can be much more than a dumb list of stale stories, of jokes that punch down, of fading superstars’ egos, of needless jingoism, of the vanity and ignorance and arrogance of the privileged. If it can be done once, it can be done again. Kaala should walk into the sunset with a lot of pride and satisfaction – and a wink that suggests, “The unpacking of myth has just begun.”