Review: With Empathy and Finesse, 'Chhapaak' Makes a Human Out of a Survivor

Until now, a survivor of acid attack spoke to us through the flattening hammers of nonfiction. The liberating lens of fiction bringing to fore her personality and desire. 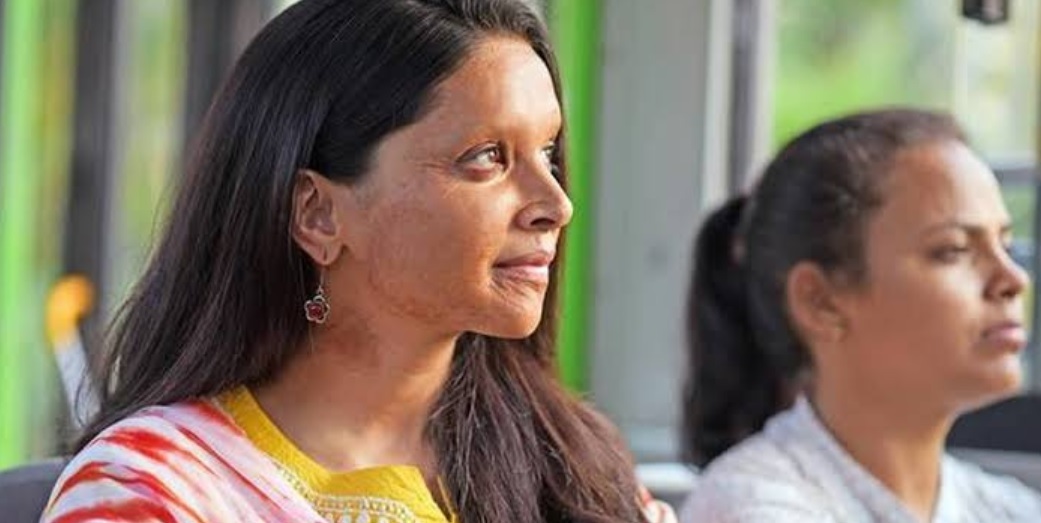 Deepika Padukone in a still from the movie Chhapaak.

Malti (Deepika Padukone) was 19, studying in 12th grade, when an acquaintance threw acid at her, disfiguring her face, disorienting her identity. That was 2005; the movie Chhapaak, directed by Meghna Gulzar, opens seven years later, when Malti is still trying to stitch her life. Her acid-stung face, even after multiple surgeries, shocks people, prohibiting gainful employment. Lumped under the category of “disabled person”, she faces daily discrimination. Malti is tired of shut doors; more than anything else – even justice – she wants a job.

Till now, a survivor of acid attack – helpless and hapless – spoke to us through the flattening hammers of nonfiction, the individual getting dwarfed by a social evil. But Chhapaak, the first Bollywood movie on the subject, sees her with the poignant, liberating lens of fiction, bringing to fore her personality and desire, disappointment and despair.

Chhapaak may not have a survivor (Malti is a fully realised character, defined beyond her grief and struggles), but it does have a ‘saviour’, Amol (Vikrant Massey), the founder of an NGO fighting to ban the sale of acid. Idealist, cynical, impassioned – and always dressed in a kurta – Amol is a joyless, crabby-type. Writers Atika Chohan and Gulzar have some sly fun at his expense: a hot-headed man who can’t help mansplain the importance of resilience and focus in the long battle against acid attacks to… Malti.

Based on the real-life story of Laxmi Agarwal, who experienced a traumatic assault and later turned to activism, Chhapaak didn’t seem to have a dense story befitting a feature film. But Gulzar finds layers: in an extended flashback, she reconstructs the incident and interrogates its details. The callous cops who indulge in victim blaming (“her phone is littered with numbers of boys”), a brief Rashomonesque situation where the needle of suspicion sways from one individual to another (much like Gulzar’s Talvar (2015)), the lawyer Archana Bajaj (Madhurjeet Sarghi) who figures out that the law itself – too broad for a crime this vicious and specific – is inadequate.

Chhapaak moves from macro to micro — from political to personal — with finesse and empathy. The acid didn’t just char Malti’s face, it also scarred her sense of self. Her parents hide her old photos, cover all the mirrors in the house; she tells them to do the same with her earrings and radio as well. But fighting one’s self is still easy, what should Malti do about the apathetic people – the kids in the nearby park who call her “ghost” or the insensitive male journalists who, like the cops, ask irrelevant questions.

Nothing comes easy to her: neither the unending surgeries nor the long-drawn court battles, especially for someone as impoverished. There’s always some trouble around the corner: the perpetrator, Basheer (Vishal Dahiya), keeps getting bail; her brother is diagnosed with a severe disease. As Chhapaak gains narrative steam, it unfolds a parallel story on the side: the perils of shaking the status quo in a historically hidebound society.

A competent first half, strong second

Gulzar cares for details – the transitions in her movies are well earned and hardly sloppy. Except for one bit of contrivance early on in Chhapaak, where Malti and Amol meet through an intermediary character, Alka. (A journalist and Amol’s batchmate, she meets him years later at a civilians’ protest and soon gets interested in Malti’s case – a character motivation that lacks a convincing reason.)

Further, the film’s first half, even though competent, lacks an essential affecting quality. A part of the reason comes from Gulzar playing safe: some tense scenes conclude – or change tonality – with a song playing in the background. She seems to be going for the lyrical, where bare-bones realism would have been more apt.

But Chhapaak finds its narrative and thematic bearings in the second half, where Gulzar ties disparate strands together. She dissects the perpetrators’ mindscapes: that such crimes are committed to maintain a perverse social order. (Most acid attack survivors are young women, wanting to study or advance in their careers.) By cutting to another flashback before the climax, the movie also becomes a story of transcending class barriers.

But most notably, Chhapaak subverts storytelling conventions by introducing a romantic subplot – between Malti and Amol, filled with muted, tender admissions – in the third act.

Padukone makes the movie all the more enjoyable. Her face quite unrecognisable for the most part, she emotes with her body language. As the years pass by — and she collects significant victories along the way, gaining confidence — we see and feel the change in her. There’s one aspect of Malti, though, that remains unchanged: when she smiles, her shoulders crunch and her eyes shrink.

A film without a famous male lead, where the heroine’s face is hidden under prosthetics for almost the entire runtime, tackling a subject that is mostly reserved for serious documentaries, Chhapaak is an unusual and significant Bollywood achievement.