Celebrating Satyajit Ray in Times of Rising Intolerance in Bengal

Irrespective of the election results, Bengal, which once prided itself in intellectual heritage and broadmindedness, has got mired in a vortex of narrow identity politics.

“Political consciousness can also mean to be conscious of the failure of our politicians,” Satyajit Ray said in a 1970 interview, when asked if he thought being political was a pre-requisite to be an artist. “Judging from the representations of modern-day politics that surround us, it is nothing but a sense of absolute disillusionment. Most importantly, people should be aware of the truth,” he said.

Curiously, May 2, 2021 marks both his birth centenary and the day of results to one of the most significant elections in his homeland since independence. At this juncture, it is worth having a relook at his persona – the quintessential Bengali with a global outlook.

Irrespective of the election results, Bengal, which once prided itself in intellectual heritage and broadmindedness, has got mired in a vortex of narrow identity politics ever since the rise of the Hindu nationalists a few years ago. In addition, the state has witnessed a rise of the ‘Bengali nationalism’ or ‘Bengali first’ approach.

Entering Satyajit Ray’s world may seem easier than for most other directors who have excelled in independent art-house cinema. Like William Shakespeare and Rabindranath Tagore in literature, he seems to have something for every age, mood, and reason. An instance where he captures the child’s heart and the intellectual’s mind is Hirak Rajar Deshe (Kingdom of Diamonds – 1980). A clever satire on Indira Gandhi’s emergency regime, this is a film whose rhyming couplets has been chanted during political agitations, and ridiculous impersonations of the Hirak Raja attempted by children for fun and play. 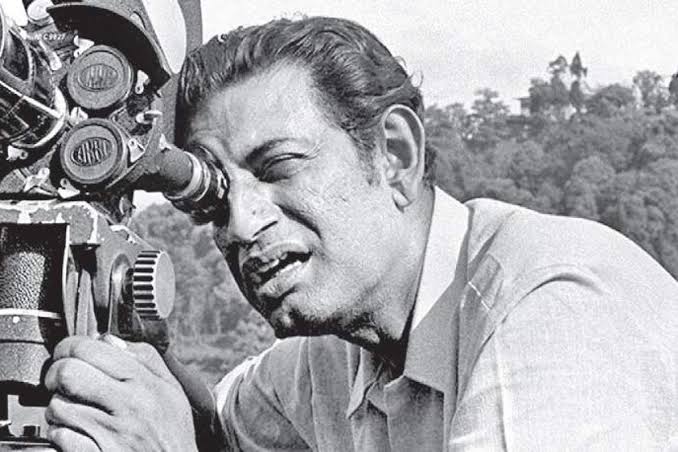 Satyajit Ray’s body of work earned him respect across the world. Twitter/@CinemaRareIN.

Unsurprisingly, the film, along with its dialogues and songs, had a profound impact on the Bengali-speaking intellectual audience, and featured as wall paintings across Dhaka (Bangladesh) after release. As the story goes, Hirak Raja holds his kingdom under a totalitarian daze, where he throws people into a ‘brainwashing’ (mogoj dholai) chamber that erases their will to resist or protest. He goes on to burn books and shut down schools on the following justification:

The scene has “as much bite in it as anything in Orwell’s Nineteen Eighty-Four,” Andrew Robinson wrote in Ray’s biography. As with Orwell or Huxley’s timeless dystopian novels, this Ray classic remains fresh as oppression changes hands and retains the same face.

In times where intolerance is celebrated as nationalist zeal, and Bengal sweats under the threat of having to align or perish, we are reminded of the pensive Charu (from Charulata, The Lonely Wife, 1964), who pens her first short story ‘My Village’ based on the rustic life of Bengal, that gets accepted to an elite magazine, out of bounds even for Amal, her handsome brother-in-law who initiated her into the creative journey. By this simple act, she forges the middle ground between her husband, Bhupati’s western erudition and Amal’s Bengali pride. She has used her newfound creative prowess to converge the national and the global consciousness, a revelation that defines Ray’s self-proclaimed favourite film, set in late nineteenth century Kolkata.

Ray was, as most critics agree, is a ‘global Bengali’. Often called as “the last glorious representative of the Bengal renaissance”, Ray had said in his 1989 interview with Pierre Andre Boutang that he had developed a Bengali style of filmmaking that was exclusively Bengali and not Indian. In his films, we see smooth transitions from Indian classical music to Indian folk music and Western classical music.

According to Moinak Biswas, a filmmaker and professor of film studies at Jadavpur University, even though Ray grew up listening to Hindustani and Western classical music, his original compositions, especially those for Goopy Gyne Bagha Byne was distinctly Bengali.

Over the years, Ray enjoyed being the cynosure of national and global attention, with almost all his films winning national and international awards at will. He drew praises from contemporary legends, including Akira Kurosawa who said: “Not to have seen the cinema of Ray means existing in the world without seeing the sun or the moon.”

Undoubtedly, Ray carried the legacy of his grandfather, Upendrakishore Ray Chowdhury, and his father, Sukumar Ray, both of whom are considered important personalities of the Bengal renaissance. The Brahmo Samaj to which the Ray family subscribed was a socio-reformist movement founded in 1828 by Ram Mohun Roy, who himself was well-versed in all major religions of the world and half a dozen languages. Built on progressive ideals that questioned idolatry, blind faith, caste discrimination and propagated women’s education, the Samaj emerged as a strong critic of the practice of Sati.

The Brahmo Movement along with Henry Louis Vivian Derozio’s overwhelming influence as a young, rational and irreverent lecturer at Hindu College that inspired a radical youth force who called themselves ‘Young India’, laid the foundation of what came to be known as the Bengal Renaissance in the first half of the nineteenth century. The ‘renaissance’ had a lasting impact on the Bengali social psyche over following decades.

Satyajit Ray possessed a Bengali pride that was inclusive and enriched by international influences – the very trait that made his films culturally centred in Bengal and universally well-received. In a documentary titled ‘Sukumar Ray(1987), he celebrates his father, the maverick genius, who created a quality of social satire, popularly known as ‘nonsense literature’, whose only parallel can be found in the works of Lewis Carroll.

A hilarious clip from Lakkhaner Shaktishel shows a nervous Rama initially pleased with a dream where seemed to have vanquished Ravana and later expressing concern alongside his brother and serenading troop of banar-sena when his spy comes back to report that Ravana is far from vanquished and is in fact headed their way with great pomp and show. It isn’t hard to imagine what BJP’s Jai Shri Ram-chanting, Hindu-Rashtra-seeking admirers would think of this gem.

According to film scholar Sanjoy Mukhopadhyay, what Ray identified with as a Bengali is a cultural modernity that signifies Bengal in the 19th and 20th centuries.

Also read: Satyajit Ray’s ‘Devi’: When It Was Still Possible To Interrogate the Primacy of Faith

Explaining how the filmmaker used Bengali signifiers across his films, he said, “The Apu trilogy is a microcosm of Bengal Enlightenment – a power of reasoning to reason everything with reason. Parash Pathar (The Philosopher’s Stone, 1958) was the only film that Ray did not send for an overseas screening. He stated that Tulshi Chakraborty’s body language in playing the role of a middle-class Bengali gentleman who becomes rich overnight was impossible to be appreciated by the West.”

While Ray maintained understated treatment in music, wit, characterisation and dialogue in his films, he continued to face criticism and attacks for not taking a stand, especially in the wake of the Naxalbari movement in 1970s Kolkata. We are reminded of Siddhartha in Pratidwandi (The Adversary, 1970) – the young, introspective, unemployed graduate who is thrown into a Kolkata he doesn’t recognise. In the extreme tension that ensues where he must ‘take a side’, his only answer is compromised corruption – a job far away from the city. The Kolkata Trilogy that also includes Seemabaddha (Company Limited 1971) and Jana Aranya (The Middleman 1976) seems to reveal a course of helplessness for the director as a non-partisan observer and the Bengali youth as a conformist.

In Mukhopadhyay’s words: “If you compare and contrast the Apu of the Apu Trilogy (1955 – 1959), with Siddhartha, Shyamalendu and Somenath of the Calcutta Trilogy (1970-76), you will understand that Ray is practically weeping at the abysmal Fall!”

Ray’s love for conflict-ridden and unresolved characters was often misunderstood, ironically enough by the educated and the intelligent. Moinak Biswas, recalls the time between 1967 to late 1970s when Ray was the veritable “bête noire” of radical Bengali critics. “In 1965-66, even his close colleague Chidananda Das Gupta accused him of being indifferent to a Kolkata that was burning,” he said.

Was Ray as apolitical as is popularly understood? “If you notice his films from that period (1970-76), you will see a strong social criticism which cannot be possible without politics,” Biswas said, adding, “For example, why would he make a film about the 1943 famine in 1973? Ashani Sanket (Distant Thunder) was Ray’s way of redeeming himself of the guilt he felt… he said he was bewildered and didn’t know how to react when it happened in 1943!”

Ray was critical of religious dogma. He had suffered a backlash from some Hindus for his film Devi, which these Hindus alleged had hurt their religious sentiments. Speaking on that episode, he said, “It dealt with dogmatism, it didn’t attack religion as such, but the extreme form of it. But people were writing in the papers that ‘Oh, because Mr. Ray was not a Hindu but a Brahmo, he is making such films against Hinduism.’ But they are stupid people, you can’t take them into account.”

In the run-up to Satyajit Ray’s hundredth birthday, the BJP has made him part of their Bengal promise. Should they win, the BJP-led state government will introduce an award honouring Ray’s memory, “as prestigious as the Oscar”. This is the same plan by which Netaji Subhash Chandra Bose, the militant patriotic braveheart who openly criticised Hindutva politics in his time, became their overnight inspiration. And Rabindranath Tagore’s poetry started suffering painful hiccups in Narendra Modi and Amit Shah’s campaign speeches.

The stage is set for Ray’s inimitable creation and the detective Felu Da’s comic accomplice Jatayu to exclaim: “Highly suspicious!”