Tandav’s case is a recent addition to a long history of Hindu audiences’ anxieties with the depiction of divinity in visual culture. 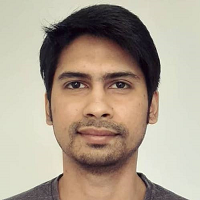 In the recent Amazon series Tandav, a college student named Shiva is introduced as the eponymous Hindu deity in a mock-mythological play. With the celestial sage Narada, he devises social media strategies to counter the increasing popularity of Lord Rama in contemporary India, while the on-screen audience of the play bursts into roars of laughter.

Real-life Hindu nationalists in India, on the other hand, were enraged by this satirical sequence. Soon this video clip was made viral on Twitter by Hindutva groups, influencers and their followers as evidence of the show’s ‘Hinduphobia’. The ‘profane’ prospect of a Muslim actor-activist, Mohammed Zeeshan Ayyub, caricaturing the deity intensified the social media agitation. In the following days, the show’s director issued a public apology, and the scene was removed from the series.

Despite that, multiple FIRs have been registered in different states against the makers of Tandav. The Supreme Court has declined the show’s creators any interim protection from arrest. When Mohammed Zeeshan Ayyub’s lawyer explained to the SC bench that he was only playing a character, Justice M. R. Shah reminded him, “You cannot play the role of a character which hurts the religious sentiments of others”. 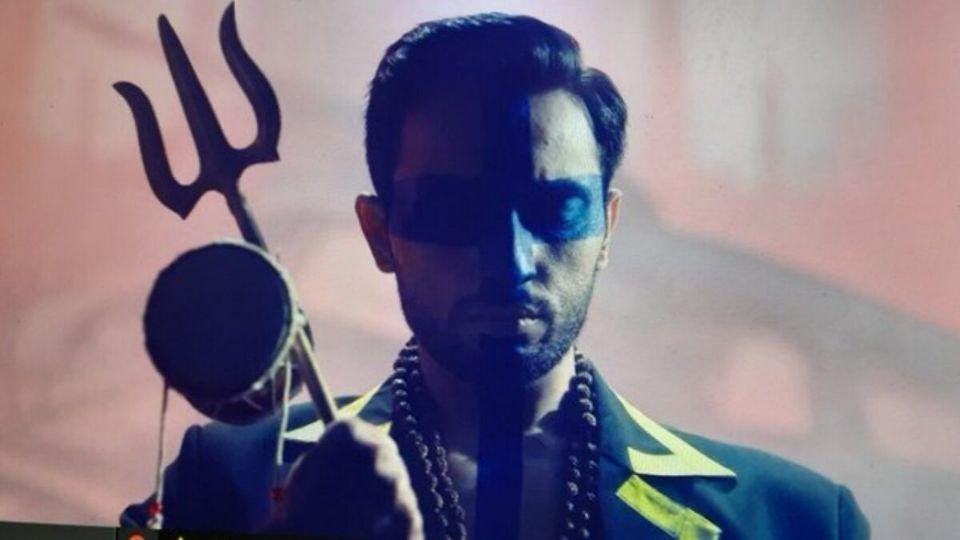 From ‘love jihad’ to ‘Urban Naxal’, a vicious vocabulary of hate against minorities and dissenters has powered the Hindu right-wing ecosystem in India. ‘Hinduphobia’ is a new American import into the Indian right-wing lexicon. The term has been coined by Rajiv Malhotra, an Indian-American Hindutva ideologue, and popularised by US Congresswoman Tulsi Gabbard. Hindutva groups in India and overseas have identified ‘Hinduphobia’ in four major sites – Muslim-majority countries in South Asia, anti-caste and Left politics in India, Western academia and Bollywood. These four sites reflect geopolitical, ideological, academic and cultural anxieties within the Hindu right.

Bollywood is presently undergoing a structural shift with the dawn of the digital. Over the top (OTT) streaming giants like Netflix and Amazon, as well as local platforms such as Hotstar and SonyLIV are reconfiguring Bollywood’s production, exhibition and distribution models. The COVID-19 pandemic has accelerated this transition by keeping Indian audiences away from theatres and largely restricting them to their phones, computers and smart televisions. The rise of religious nationalism in India under Narendra Modi has coincided with a boom in Internet consumption. However, OTT platforms have mostly promoted secular entertainment à la Bollywood and often pushed anti-establishment content. Despite its emancipatory potential, the ubiquitous visual representation of Hindu divinity in the colonial era raised alarm among staunch devotees. In 1921, a letter to the editor of the Times of India titled ‘Who Insults Hindu Gods?’, complained how “people of all races” could not only see Hindu deities on clothes, matchboxes, cinemas and sweetmeat shop boards, but also perform as Hindu gods and goddesses on stage.

While Hindu mythology paid great dividends at the box office, films with Muslim actors playing Hindu gods faced incessant agitation. During a screening of Bilwa Mangal in 1932 in Lahore, a group of Hindu men protested against the casting of a Muslim actor for the role of Lord Krishna and “tore the screen with a knife during the interval”. Some years later, a Bombay-based film magazine raised concerns about how the North Indian film press had interpreted Sardar Akhtar’s portrayal of Lord Krishna in the film Bharosa as “an insult to Hindu religion”.

With the post-Independence rise of ‘social’ films, the mythological genre largely faded into the background. Calls for stricter censorship for films based on Hindu deities were met favourably by the Congress government under Jawaharlal Nehru. There was an ulterior motive at play, especially in Madras, where a complete ban on the portrayal of Hindu divinity was seen as an opportunity to elevate the status of local ministers. The cantankerous Baburao Patel of Filmindia declared that “the Indian screen has mostly murdered our gods” and feared that “once the Hindu gods of mythology are destroyed, secular deities of the Congress can be installed on the vacant altars”. 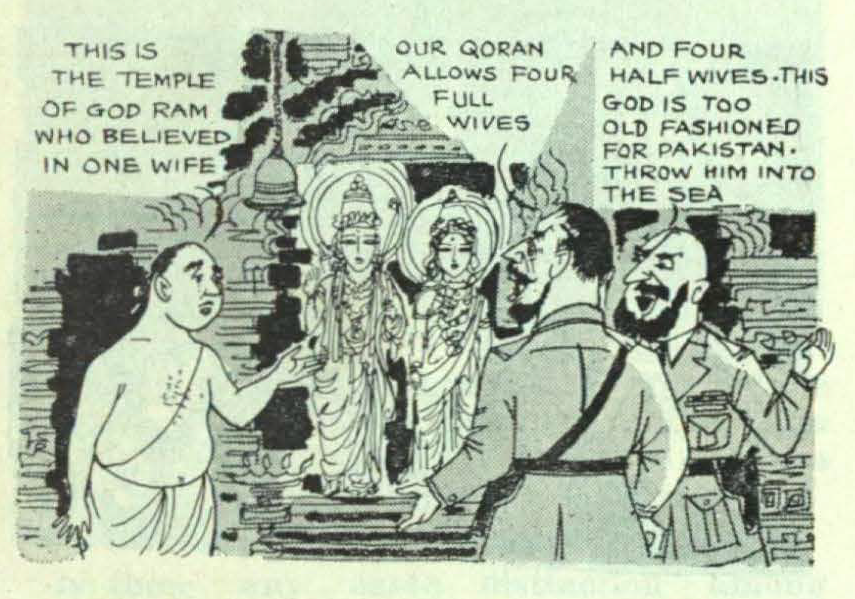 ‘Hinduphobia’ is a modern repackaging of anti-Muslim prejudices and anti-Congress sentiments that originated in the late colonial period and has taken root in the current Modi regime. The old cultural politics of hurt has resurfaced, only this time ironically ensconced in the liberal language of ‘phobia’.

Due to a few theatrical releases, the OTT platforms are bearing the brunt of this onslaught. Like Amazon’s Tandav, Mira Nair’s A Suitable Boy on Netflix recently came under fire for an inter-faith kissing scene inside a temple’s precincts. Last year, the Ministry of Information and Broadcasting brought all OTT platforms under its ambit. The increasing mob censorship of web content is likely to translate to more official forms of regulation as ‘Hinduphobia’ rears its ugly head.

Despite Bollywood’s liaisons with the BJP, the film industry’s privilege and popularity make it a soft target for rank political opportunists masquerading as warriors of the Hindu faith. Bollywood professionals, especially its Muslim stars, have been targeted by far-right Hindu groups like Shiv Sena and Karni Sena from time to time. However, with an unprecedented rise of media-manufactured hate, the film industry’s popularity has perhaps never been this vulnerable. Last year, the Indian news media’s crusade against Bollywood, in the wake of actor Sushant Singh Rajput’s death, became an underhanded tactic to divert people’s attention from the Modi government’s poor handling of COVID-19 pandemic. Online portals of unbridled disinformation and hate speech catered to similar political opportunism.

Bollywood is India’s biggest creative industry and recognised as a major influence on South Asian public culture. It remains immensely popular among Indian diasporas and has also been acknowledged widely as a soft power for India. Mining Bollywood films for ‘Hinduphobic’ content is therefore a strategic move intended to reorient both national and international Hindu audiences in the era of global streaming.

A right-wing leaning Twitter account, Gems of Bollywood, has decided to undertake this mission. It excerpts and annotates ‘Hinduphobic’ sequences from yesteryear Bollywood films as well as contemporary web content “to comprehensively bring out truth of Urduwood”, unmistakably a jibe at the secular workings of Bollywood, the unparalleled stardom of the three Khans, and the historical influence of Urdu writers in the film industry. 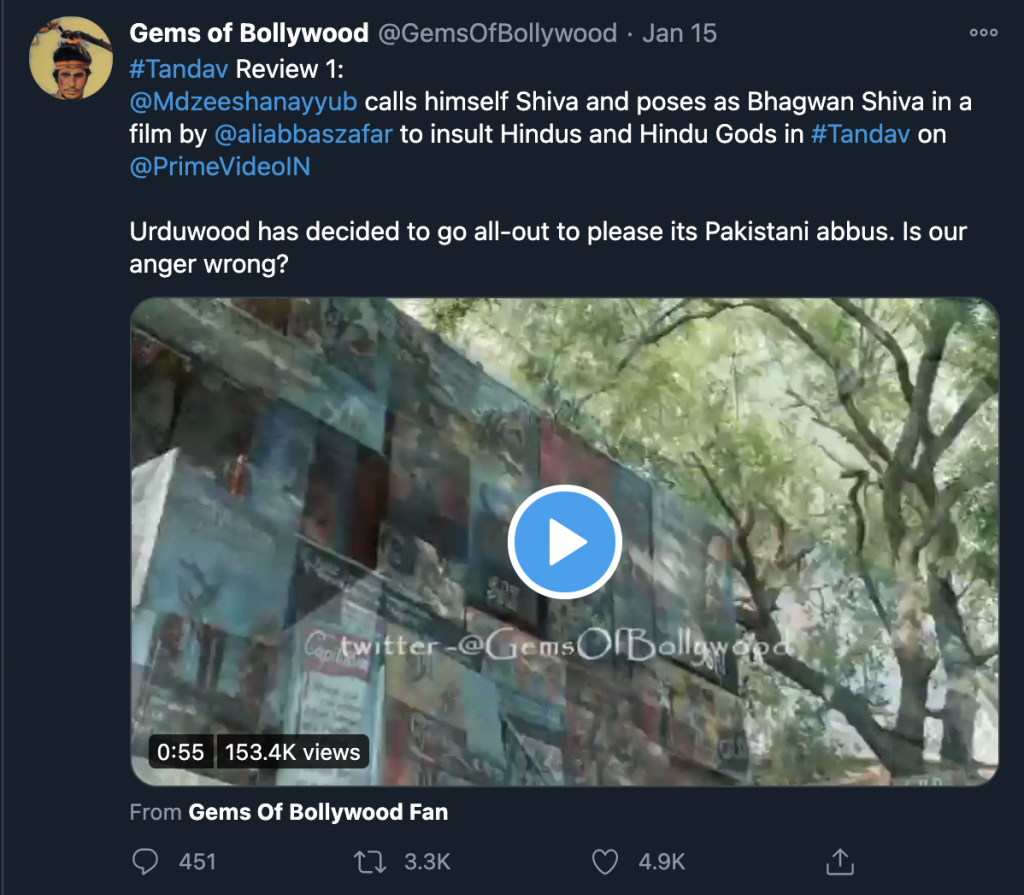 Gems of Bollywood’s painstaking curation could seem convincing to the converted but a Bollywood buff would find it laughingly embarrassing. Hindi films from the 1980s and 90s are retro reservoirs of cringeworthy content. Gems of Bollywood exploits films from this period in particular to mischaracterise Bollywood as an ahistorical and homogeneous underworld of ‘Hinduphobia’, rape culture, casteism and so on.

While the Twitter account with over 80,000 followers has dodged media attention so far, a fact-checking website has revealed significant bot activity on its posts, which may indicate a high count of fake followers. Gems of Bollywood repeatedly shared ‘anti-Hindu’ clips from A Suitable Boy and Tandav and its followers used the hashtags #BoycottNetflix and #BoycottAmazon respectively. Right-wing politicians in power pick up these cues and have bullied these streaming platforms with legal action for ‘insulting’ the Hindu faith.

The oft-heard phrase “Hindu khatre mein hai” (Hindus are in danger) has long indicated the minority complex of Hindus who constitute around 80% of India’s population. Allegations of ‘Hinduphobia’ weaponise such unfounded fears to attack influential institutions and industries that do not always toe the government line. Under a Hindu nationalist regime, the film industry’s long history of secularism from the Nehruvian to neoliberal era has become a threat to itself.

But charges of ‘Hinduphobia’ have not been levelled against Bollywood stars alone. Stand-up comedian Munawar Faruqui has been incarcerated and denied bail for jokes on Hindu deities that he was “going to” say in his act. The legal sway of such allegations is significantly greater against vulnerable artistes with less financial and legal muscle. As the term ‘Hinduphobia’ gains wider currency outside far-right networks, Bollywood and other cultural bodies that provide secular entertainment remain increasingly susceptible to the dangerous fictions of Hindutva.

Rakesh Sengupta is a film scholar pursuing his doctoral research on early Indian cinema in SOAS.

Note: This article was updated at 2 pm on February 4 to show that @GemsOfBollywood did not use the hashtags #BoycottNetflix or #BoycottAmazon, but its followers/supporters did.