India’s Big Bad Billionaires Are United in Their Arrogance, Entitlement and Disdain for Laws

Despite its flaws and lack of political context, the new series on Netflix is a much-needed breakthrough in documentary making. 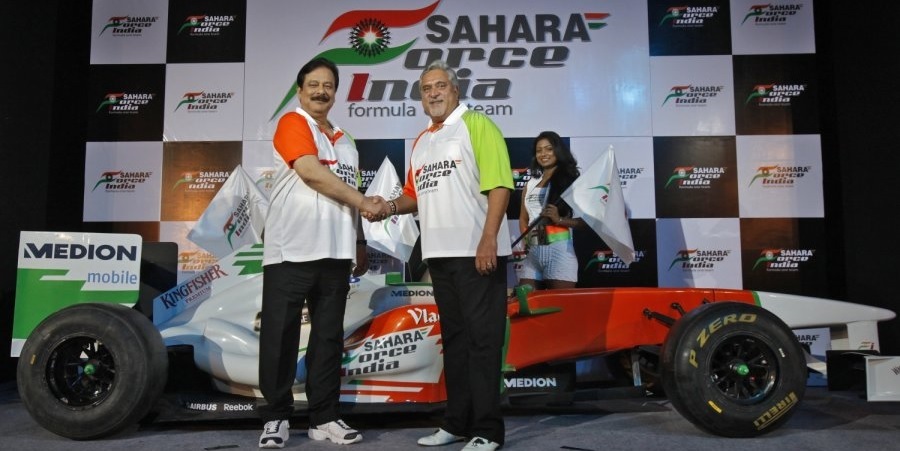 Somewhere towards the end of the second episode of Bad Boy Billionaires, on the fugitive businessman Nirav Modi, Manoj Kharat, a clerk in Punjab National Bank, says, “My life is over, I am half-dead anyway.” Kharat was the man who entered data given by his boss Gokulnath Shetty in the Fort branch of the bank, from where Modi’s empire was funded. The letters of undertaking kept on being issued from this branch, with no backing of collateral or security.

It was on the basis of these LoUs, totally amounting to an astounding $1.8 billion dollars, that Modi built a network of stores in New York, London, Hong Kong and Beijing, held lavish parties, bought top-end homes and art. The many models he signed up to show off his designs too were indirectly paid for by this bank and thus, finally by small depositors. The cream of Mumbai society attended his soirées where the champagne was flowing; no one really asking where he was getting the money from to expand so quickly. As we see repeatedly in this series, the cream of society – rich and dense – doesn’t ask questions, it just goes with the flow.

Kharat was jailed for three months – “It is another kind of hell,” he says. He is a mere footnote in this larger story of glitter and dazzle. There is every likelihood that he and his boss, middle-class office-goers – were never invited to those parties even though they were facilitating Modi’s illicit fortunes.

Each of the three released episodes in the series, on Modi, Vijay Mallya and Subrata Roy, show the stories of those who suffered the most while the men became richer and richer – small income men and women, trying to increase their modest amounts in the hope that it will give them a better life. Each of the stories is heart-rending.

But this is ultimately a series about the rich and famous. Netflix would never have bought a pitch about a series called Manoj Kharat, or for that matter, Punam Gupta, the articulate agent for Sahara’s chit funds – which was little more than a Ponzi scheme – who found it difficult to access the funds she had got her neighbours in a Mumbai slum to deposit with the company. But all three episodes have given a platform to the voices of those who have suffered a lot, while telling the stories of these scamsters – there is no other word for them. Sahara’s is the most interesting story, and the sharpest made episode, with Mallya following – for all his diamonds and the scale of the fraud, Modi is a dull, every day scamster. The documentary on him is in the same vein, being little more than a montage of his promotional films.

On the face of it, Mallya, Modi and Roy have little in common. The first one was to the manor born, and grew up with a toy Ferrari of his own; the second claimed a somewhat dubious family legacy of diamond dealing, and belonged to the clannish and closed world of Indian diamond merchants and the third, the son of a minor civil servant in a mofussil UP town.

But they were all united in their unbridled ambition, their self-belief and their conviction that rules were for the little people. They wanted to be the biggest, the richest, and most powerful – the constant invocation of ‘world class’ is most evident in Mallya and Modi’s case, where one wanted to create the best airline and the other a global luxury brand, as these were goals worth pursuing at such a cost.

Besides which, as soon becomes apparent, Mallya was a lousy businessman, changing his business model from low cost to one with first class seats and then went and bought Air Deccan at a ridiculously high price. He once went to the Airbus factory in Toulouse for a tour and at random picked up a few expensive planes, much to the surprise of his own CEO Alec Wilcox.

Modi thinks opening a store in New York, London or Macau or wherever makes him truly international – as sales don’t keep up with expectations and expenses mount, that dream turns to dust. Then it’s back to the dingy offices of the decidedly unglamorous Punjab National Bank for more unsecured money, to be obtained by shady means. 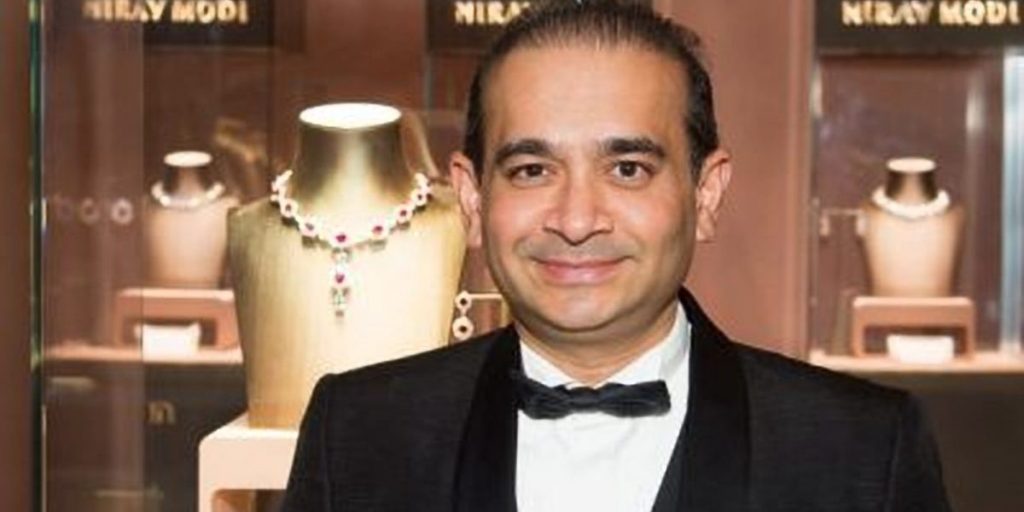 As for Saharashri Subrata Roy, a victim, like the other two, of hubris and arrogance, invoking patriotism and family values is his only answer to every question-that and the remarkable ability to believe his own lies that all the money (a full Rs 20,000 crore), has been returned to depositors as per the Supreme Court’s orders. He then continues to ignore the apex court and finally gets thrown into jail for over two and a half years.

Sahara was no ordinary business, it was a cult, with a million strong sales force, all dressed identically, all greeting each other with the Sahara salute – holding the right hand just above the heart. In one chilling scene, tens of thousands of men and women spread over an open ground in neat rows, sing the national anthem; it’s something straight out of Triumph of the Will, Leni Riefenstahl masterpiece documentary on Hitler’s speech. “He is divinity,” says Vivek Kumar, one of his ex-aides, his eyes shining with devout belief.

Then we are shaken rudely out of our stupor by the intrepid investigative journalist Sharad Pradhan, who followed the Sahara story for 30 years, getting frustrated when his stories were not published because newspapers were getting ads from Sahara.

As for Mallya, it becomes immediately apparent that this entitled tycoon never really had a clue that he was doing anything he was not supposed to do. He kept on hosting parties while his employees were marching in the hot sun demanding their wages. He continued to collect toys – yachts, an airline, a cricket team, formula-one racers and lavish properties. It was all on brand, you see. After all, he was ‘flamboyant’ and the ‘King of Good Times’ as his various fair-weather friends keeping reminding us repeatedly in the first 20 minutes of the film.

These friends still hung around with him even after his empire was collapsing, happily going to his parties to see and to be seen. After all, it was not their money that was being lost, was it? One socialite perceptively says – “no one asked where all this money was coming from.” Well, it was coming from the unpaid salaries of staffers, from the millions of small villagers and slum dwellers and from the public – the notion of ‘public money’ simply does not exist in the minds of these tycoons.

Mallya most of all seems oblivious to the pain he has caused people, especially his staffers – at least the other two have been to jail, and that is a kind of retribution even though the employees remain unpaid. Mallya has used every strategy to avoid being extradited from the UK, and so far has continued to stay on. But, going by the documentaries not one seems contrite, much less repentant. His son Sid too tries to explain his father’s high-profile lifestyle as being who he is and how it worked in tandem with the brand’s profile, but there’s not a trace of self-doubt. The film, as much as the entire series, is a straight-forward morality tale, reflecting not just ‘New India’ but the closeted world of the filthy rich who wonder what the fuss is about when they scam a bank here or con a daily-wage earner there. 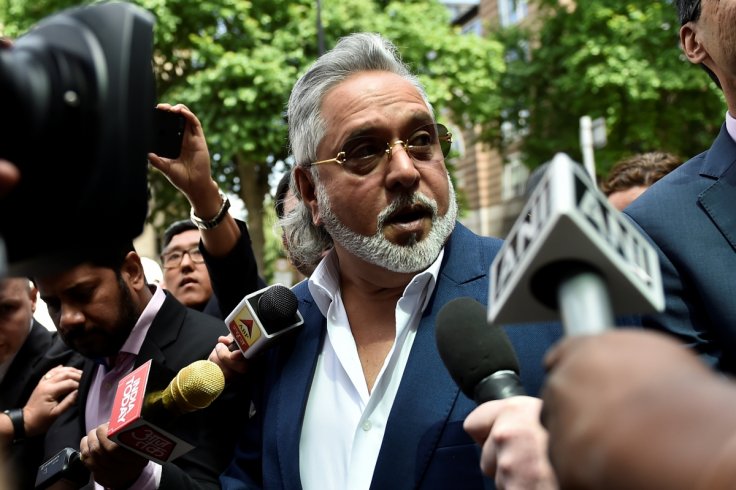 If there is one signal service this series has done, it is to completely expose the shallowness of the Indian elite – “Strip away the phoney tinsel of Hollywood and you find the real tinsel underneath,” a wit once said in the 1940s. Seeing the top stars of the day, families in tow, dancing at Saharashri’s sons’ wedding (cost, an estimated $60 million) shows that this saying is applicable even today.

If the series suffers from one big flaw – intentional, one thinks – it is the complete absence of political context, a stray mention of a leader here or there notwithstanding. It doesn’t tell us that Mallya was an MP from the Janata Dal (Secular) or that he left India for the UK during Narendra Modi’s rule, even as the new prime minister was boasting that he would go after the corrupt. Nor does it show the Nirav Modi in a group photo with Narendra Modi in Davos, or Modi’s praise for young Nirav’s uncle and mentor ‘Mehul Bhai’, also a fugitive diamond merchant somewhere in the Caribbean.

Sahara’s Roy too was close to UP and Delhi politicians and barring a visual of Atal Bihari Vajpayee and Mulayam Singh Yadav attending the son’s wedding, there is little else. It is as if all these three businessmen existed and operated in a political vacuum. Are the producers or Netflix being ultra-cautious? 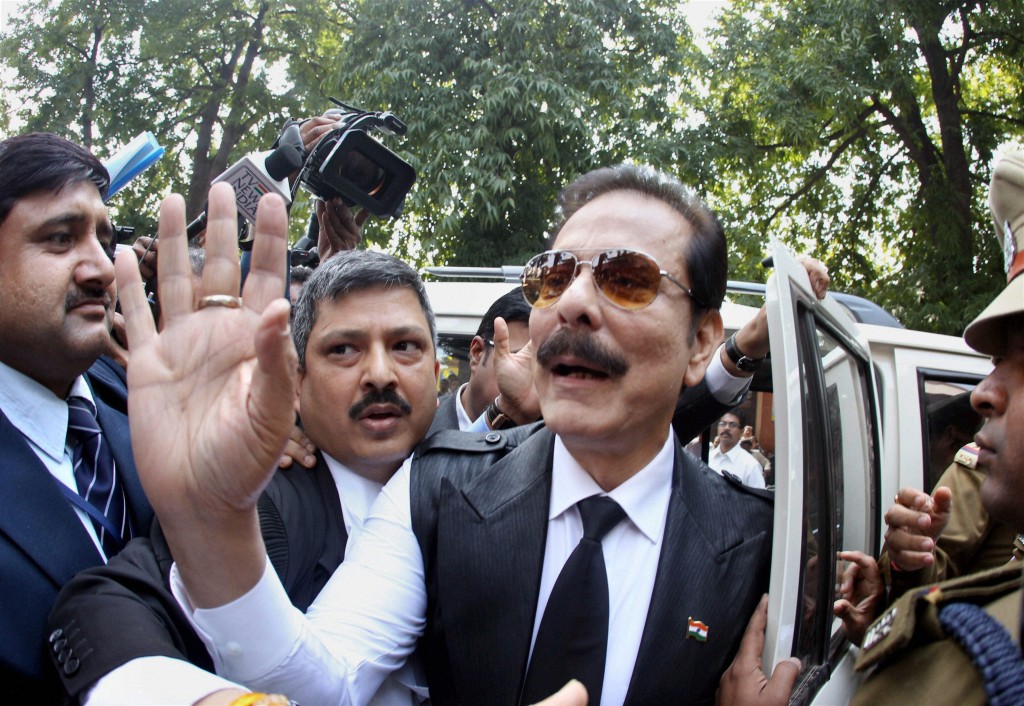 Subrata Roy arrives at the Supreme Court for a hearing in 2014. Photo: PTI/Shahbaz Khan.

Despite this, and though none of the films take any kind of open stand, the series is a milestone because Indian filmmakers have not made such documentaries on the corporate sector. Political documentaries, and some fine ones, have been made, and many human stories have been told, but the corporate sector has escaped scrutiny so far. Indian media has a shameful record of independent investigations into big business—the stakes are much too big. And there was neither finance nor platforms – so far – to show such films. These films have broken new ground and not in a ‘lifestyles of the rich and famous’ way.

The production values are of a consistently high standard, and the big budgets well spent. Some great drone cinematography brings a sense of perspective and scale such as shots of abandoned Kingfisher aircraft lying in some kind of storage graveyard for planes, or a man (purported to be Roy), on a scooter visiting villages in the interiors of UP in his early days. Along with multiple opinions on each tycoon, this enhances the viewer experience. The directors offer no opinion on the subject and there are no voice-overs, but one has to read between the lines.

One can only hope that there are more such documentaries in the offing, about businessmen who siphoned off public funds and owe banks in the billions – and still roam free in India – will be made. Their well-oiled image building, which has created a lopsided public perception, could do with a dent or two.