'Axone' Review: A Bit of North East in a Delhi Neighbourhood Where Racism Is a Regular Experience

Food is the central motif and metaphor of the film that explores migrants’ lives. 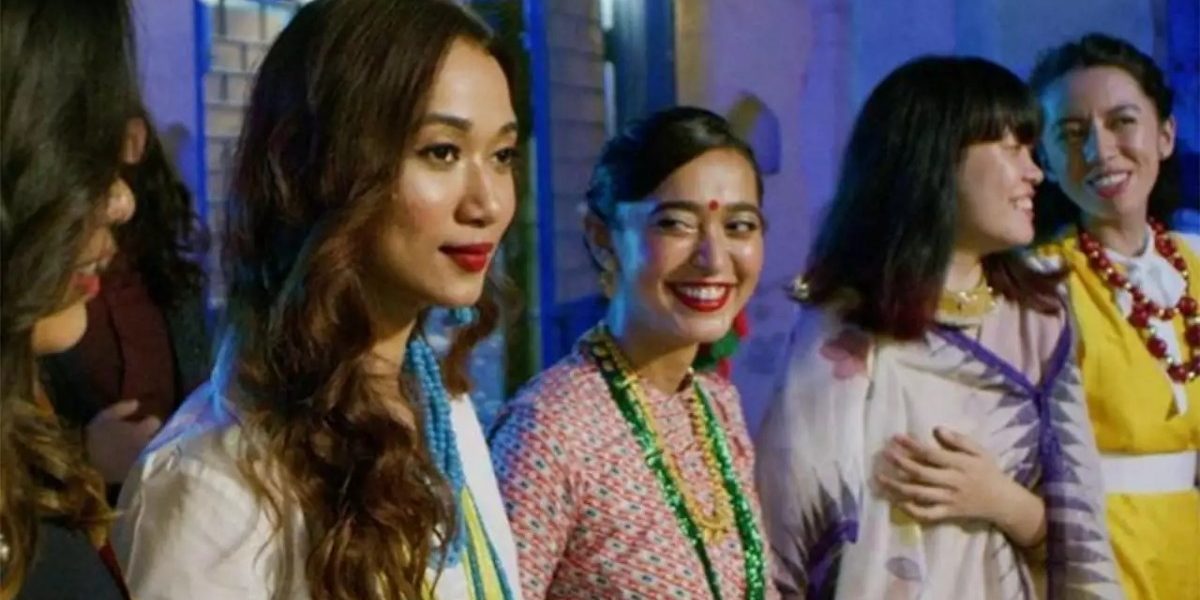 One of the scenes in Nicholas Kharkongor’s movie Axone shows a North Indian landlady (Dolly Ahluwalia) shouting at a group of tenants who are from the North East. “When you rented this apartment, I had told you can’t make that stinky food here, didn’t I?” she asks, demanding an explanation from the group who are making pork with ‘axone’ (akhuni), a strong-smelling delicacy in Naga cuisine.

The movie, Axone: A recipe for disaster, is a stirring satire which revolves around a day’s incident in the lives of a group of friends who are from the North East, as they try to cook and surprise one of their friends on her wedding day, and the various troubles they encounter while doing so.

The film gives a vivid representation of the lives of migrants from the North East in the cramped lanes of Munirka or Humayunpur, Delhi where the movie is shot. The cast comprises a group of actors who hail from the North East and are newcomers, as well as stars like Sayani Gupta and Vinay Pathak; Assam’s Adil Hussain also makes a special appearance. Various issues ranging from racial bias in subtle as well as threatening forms that the migrants have to encounter daily, intertwined with food, to the social aspirations of migrants, as well as agency of the migrants to exercise their right, are raised through the movie.

Kharkongor also very vividly, but in a non-moralising way, gives glimpses of mental health issues ranging from panic attacks to long-term trauma and stress, suffered by victims of racism in various forms. His own experience living out of the North East for decades and spending life in Delhi clearly adds up to the vivid description he provides in the film. Axone stands out because it is probably the first mainstream film that in Kharkongor’s own words, mixes North East Indian and North Indian narration, and in doing so it uses a unique medium – food – to explore concepts of social space and rights.

Also read: Review: ‘Eeb Allay Ooo!’ Is a Satire Whose Heart Beats for the Marginalised

Migration from North Eastern states to the metros has been prevalent since independence. A large number moves to Delhi. While kin and ethnic ties aid the migrants in creating a space for themselves in these alien cities, constant racial discrimination is a living reality for the population.

When out of their native states, the North East Indian community forms a space, more so an identity for themselves which allows them to survive by exercising their agency. The area where Axone is shot, Humayunpur, is one such space of shared experiences. Throughout the film, right from the start where the two girls Upasana (Sayani Gupta) and Chanbi (Lin Laishram) walk the dingy lanes with their gazes lowered, the racist and sexist slurs ‘Malai’ hurled at Chanbi, and the experiences of Bendang who faces severe post-traumatic stress, are examples of day to day encounters with racism which the migrants have to face.

Axone also throws light upon the peculiarities of a typical middle-class Delhi neighbourhood, with characters of Nani (Dolly Ahluwalia), Shiv (Rohan Joshi) and the landlord (Vinay Pathak) adding humour occasionally. Shiv emerges as a friend who tries to be helpful, but his occasional casual racism, which is not threatening, is also a reminder of the ‘otherisation’ the community faces.

Food becomes a shared experience for the migrants which creates a sense of place, as well as serves as a means to bridge intra-migrant tensions. Issues of intra-migrant differences within the North Eastern community-based ethnicity, are addressed. Upasana who is a Nepali, is often left out and reminded that she is not ‘Northeastern enough’ by her friends, but her looks also provide her a privilege; she is not stereotyped so often. Although she does not share the same native cuisine as the Nagas, it is food through which she tries to assimilate into the culture. Sharing food is portrayed as being central to friendships, at the same time variations among North Eastern food is highlighted, which also hints at intra ethnic differences. Upasana, for instance, cannot stand the smell of Axoni and is not used to having it as she is a Nepali.

The most important question that Axone raises can be understood through the concepts of place-making and ‘right to the city’. Eating outside is common in the area, and Delhi has a number of North Eastern food joints which have become popular among the locals as well, but eating out is relatively expensive, so cooking becomes important. Being able to cook their own food provides the migrants with a sense of home, who try to shape the space they operate in, in ways which create a sense of familiarity in an otherwise alien neighbourhood. 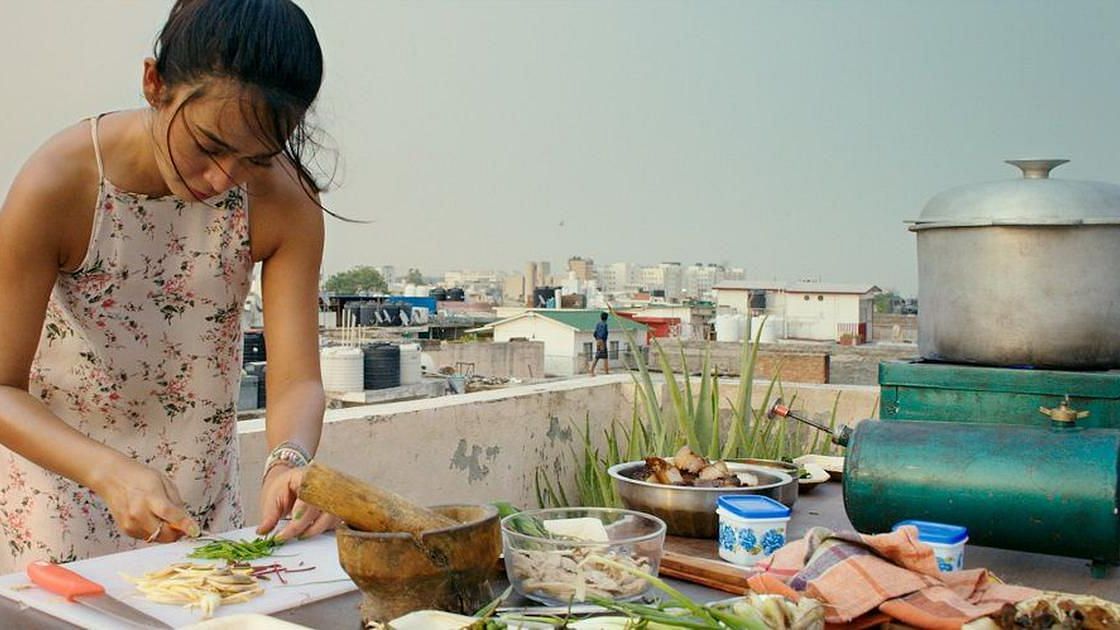 The question of private as well as public space arises throughout the movie, wherein the migrants who clearly own no or very little capital within the city, find it hard to demarcate spaces as private. Kharkongor, quite familiar with the neighbourhood has used long shots to depict this effectively. The scenes in the film where smoke from the axone pot rises up the dingy building and reaches all the other tenants’ through the windows is an example of this shared form of space.

On the other hand, Martha, a native of the North East married into a North Indian Punjabi household, has greater power in terms of exercising her rights. Martha’s son Jassi who has inherited her features, when subjected to a racist remark, doesn’t stay quiet and retaliates with abuses, something which the others who face such remarks daily ignore or smile at helplessly. Rich with experiences, Martha is better aware of the dynamics between the North Indian and Northeastern Indians, and knows what situations may create conflict.

Also read: ‘Gulabo Sitabo’ Drifts Along, Picking Up Some Rhythm Only Towards the End

“I hate this city… I’m only here because of you,” says Bendang to Chanbi who in turn responds saying, “You have created your own North East here.” There is a scene in Axone where the group of friends walk together, decked up in their respective traditional attires in the contrasting lanes of the neighbourhood, a collective assertion of rights.

The depiction of racism is limited to instances of individual racism. Axone does not make the system supporting the racism explicit; the city, the neighbourhood and the house are all part of the system. But it does highlight the reality in the way it is. Axone is surely not the flag-bearer of the anti-racism movement within Bollywood, but it is indeed a good start to understanding an issue from a perspective which is otherwise absent.

The characters feel real, not overly dramatic and one might relate to them in multiple ways, ranging from relationships, career struggles to commitment issues. Sayani Gupta stands out as the only non-North Easterner playing one – she brings life to the character of Upasana by mastering the accent and the role in general. The movie feels fresh but there are issues with the structuring of the film and one may find it dragging in some places.

Axone is a good watch to understand the daily struggles of those subjected to racism, and their interactions with other communities, spiced with humour and varied North Eastern culture, ranging from food to weddings.

Suparna Chatterjee works on food, urbanisation and its gendered impact, at the Ashoka Trust for Research in Ecology and the Environment (ATREE).