The film is full of In references about the film industry and the tussle between the reigning establishment and the maverick outsider, done in a video game style. 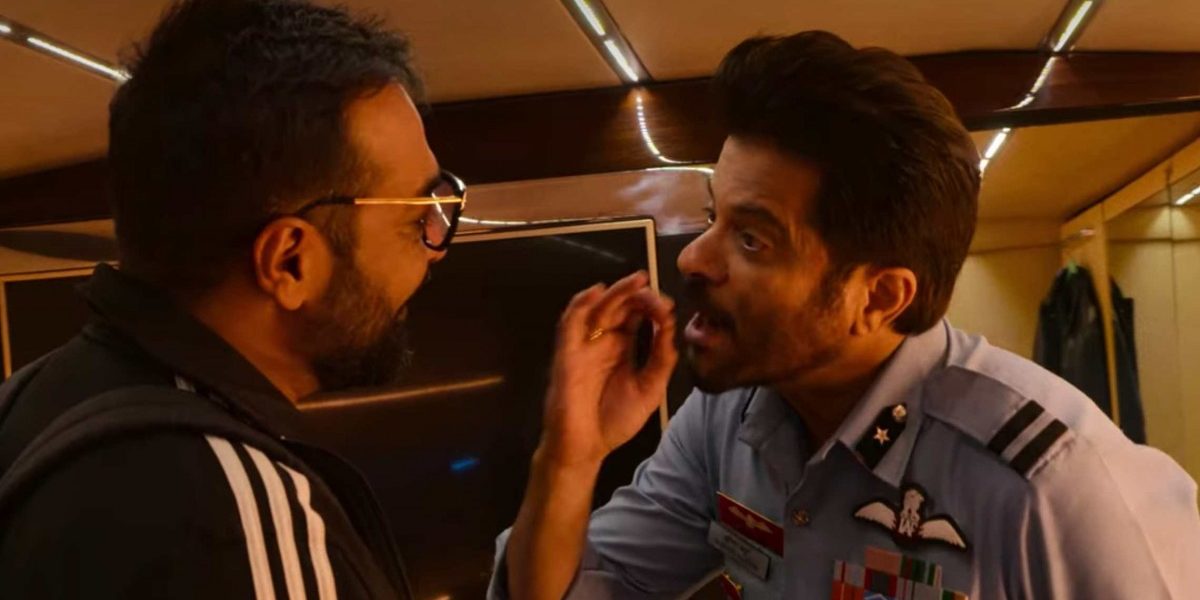 Anurag Kashyap and Anil Kapoor in 'AK vs AK'.

Anurag Kashyap is angry. During a panel discussion at the Mumbai Film Festival, he quarrels with Anil Kapoor. The filmmaker says the actor is past his prime, that he’s become irrelevant. Kapoor believes the director was never relevant. More verbal volleys fly – including who helms a film: the director or the actor – culminating in Kashyap splashing water on Kapoor’s face.

It is the kind of event that could well be true. Kashyap is known for his outbursts; ageing actors, once shining stars, are insecure. Yet what feels like fact is fiction in Vikramaditya Motwane’s latest, AK vs AK, streaming on Netflix. The aforementioned altercation becomes the film’s inciting incident. What follows is quite nutty. Kashyap kidnaps Kapoor’s daughter, Sonam, and tells him to find her before sunrise. His assistant, Yogita (Yogita Bihani), will follow and film him through the night. Kashyap has three conditions: no outsiders, no cops, and the camera won’t stop rolling.

It’s a kooky premise that doesn’t give you much of an option. If you reject it for its absurdity, then you’ll reinforce the film’s point. AK vs AK is the kind of movie that anticipates the audience’s reaction and flips it in the form of an in-joke. Indians adore their celebrities (unless they tweet something political), and AK vs AK takes that obsession and moulds it in the form of a video game.

Also read: ‘I Am Greta’ Is More Than an Impassioned Rail. It’s the Death of Teenage Innocence.

The film’s opening and end credits, styled in the form of gaming fonts, further that theme. The thriller sustains an animated mood as Kapoor intensifies his search; the large texts on the screen keep reminding us of the time left – “12 hours to sunrise”, “10 hours to sunrise”, “3 minutes to sunrise” – suspending us in no man’s land flanked by real and surreal. Like a video game, this is a story of one-upmanship. There are two players: one from the establishment, the other an outsider. AK vs AK, then, is a tussle between two camps, two filmmaking philosophies, two worldviews. An abducted Sonam is just a frivolous ruse; the real stake here is cinematic authority.

Like true meta filmmaking, this conflict has its roots in real life. It began in the mid aughts – the struggle between the dynasts and the outsiders: the former, growing up in Mumbai, making escapist fares; the latter, belonging to small towns, dreaming of realistic dramas. The former (literally) owned the means of production; the latter found it tough to enter the guarded enclaves. AK vs AK’s lead characters represent these worlds. Kashyap, who doesn’t belong to a film family, is the quintessential outsider, a restless rabble-rouser. Kapoor is, well, Kapoor, his lineage extending to Bollywood’s first patriarch, Prithviraj.

This is a film about power: the power to make a movie without interference, to realise a bizarre idea, to make someone dance to your tunes – the kind of power outsiders have been denied. But screenwriter Avinash Sampath disturbs the balance scale. Since Kashyap has kidnapped the actor’s daughter, he towers over Kapoor. Motwane, collaborating with Kashyap for more than a decade, is directing the real film. It is being streamed on Netflix, an over-the-top platform empowering alternate Hindi filmmakers, for which the directors made a web series, Sacred Games. In the world of smartphones and digital filmmaking, the film implies, the ‘New Bollywood’ is beginning to tilt the scales.

If these backstories interest you, then you’ll find AK vs AK fascinating, a story unfolding on two levels: one on the surface, like most fictional features, and the other a tier above, replete with meta references and self-aware winks. The conceit reminds you of a famous Anil Kapoor drama, Nayak (2001), a fact acknowledged by the film. (Kashyap wrote the dialogues for it.) There are references to a thriller, Allwyn Kalicharan, that Kashyap had pitched to Kapoor. (It never got made.) A large part of the movie is set on the night of Kapoor’s birthday, which is on Christmas eve. Kapoor’s real date of birth is December 24, the film’s release date. Then there are cameos, either physical or aural, by noted Bollywood figures – such as Nawazuddin Siddiqui, Boney Kapoor, Harshvardhan Kapoor and, of course, Sonam – that complete the loop of this loopy story.

There are nudges at the level of form, too. The film is shot with a handheld camera – quick pans, shaky movements – resembling ‘guerilla filmmaking’, the preferred shooting style of many independent filmmakers. Kapoor, who isn’t acting as much as ‘living’ a role, is leaning on “method acting”, a style foreign to most Bollywood stars. The locations, too, play along. We see Kapoor’s house, then Kashyap’s – there are shots of JP Road in Andheri West, a stretch known to many Bollywood strugglers, something that hardly finds representation in mainstream Bollywood. Kapoor often tells Kashyap that he’s gone nuts; to which he says, yes, how else do you expect me to behave in an industry that’s run like a mental asylum?

AK vs AK is a smooth, sharp blend of fact and fiction; it’s breezy and compelling. Motwane also slips in some commentary amid the chaos: that filmmaking is inherently cruel; that someone, somewhere is always paying a price; that the difference between the reel and the real can vanish in an instant, unbeknown even to a perceptive director. It struggles for a bit in the middle – failing to rise above its frivolity, sporadically sagging under its monotonicity – but another plot twist – and bang! – we’re right back. This isn’t a ‘deep’ film, and it doesn’t pretend to be. It’s very much a ‘masala’ fare, unveiling as a subversive F*#! you to the Bollywood establishment.

This is a movie that relies on its leads’ performances. Kashyap has always been a pleasant, engaging on-screen presence, and here, too, he’s no different. There’s a distinct ease to his performance that obliterates the distinction between person and persona (not that there’s much of a difference here). But the main revelation is Kapoor who is raw, real, searing. A role that has just one false note, when he lies bruised on the road remembering his negligence as a father, and several memorable flourishes, including one sublime moment where, in exchange of a crucial information, a wounded Kapoor dances to My Name is Lakhan in front of a crowd. It’s a scene that restores a crucial equilibrium: that no matter what, the paying public still ‘owns’ the stars. Kapoor acts with his heart and mind and body: a superstar stripped to his fundamental identity, a frantic father, a lost human.

Also read: ‘A Call to Spy’: A Sobering Look at War Without Exaggeration or Dramatic Twists

But despite some pleasant accomplishments, a meta film needs to be recognised for its essence: that it is an act of self-absorption – and so, the weight of that vanity becomes as important as the film itself. This thriller unfolds as a distinct divide between the hidebound establishment and the edgy mavericks. In the garb of nudge-wink-nudge moviemaking, there’s some deification of Kashyap and an evident disappointment about the celebrity, dynastic culture depriving Bollywood of trailblazing talents. There’s some truth to that, but Motwane also falls short of introspection.

‘New Bollywood’ has been around for the last-one-and-a-half decades, and the results are out for all to see: that, apart from a few exceptional films here and there, the movement hasn’t lived up to its vociferous promise. That, like mainstream Bollywood, many of its successes are laced with a disclaimer: that they’re good but good only for India. That it has become a victim of complacency and smugness, of lack of consistency and searing ambition. That this ecosystem, too, thrives on and rewards a feverish fanboy culture – the very culture that AK vs AK is trying to prick. It’s understandable why Motwane is insulated to this inherent tension, for he’s himself a character in that story.

It’s that extra step, that final lunge, that this film lacks. The real joy of watching a film centred on tussling protagonists is that it corners you to take sides. The eventual victory or defeat then becomes personal. But here, despite the film’s constant insistence, there’s not much to choose from. A great self-mythologising tale demands great heroes. But in Bollywood, true heroes are difficult to find when the camera stops filming.