The Fuehrer at the University of Jews

Why he was invited to a Jewish educational institution remains a mystery. 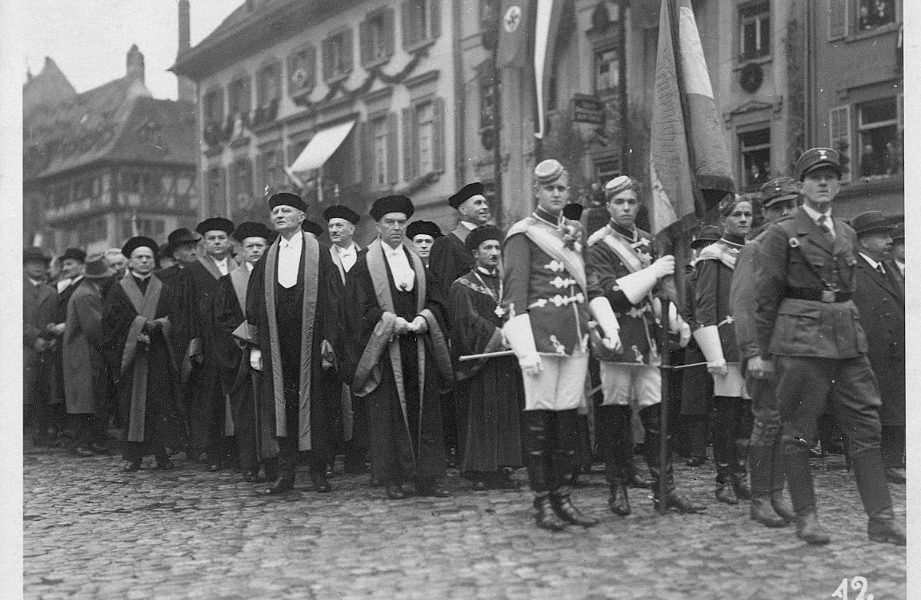 The pro-Nazi academic Martin Heidegger at the ceremonial procession for the opening of the winter semester 1933/34 at Freiburg University. [Representative Image]

It was the winter of 1934 or may be the summer of 1936 – the year doesn’t really matter as time and seasons are only a trivial premise of civilisation – when the Fuehrer was invited to the celebrations of the establishment of the Hebrew Jewish University.

Why he was invited to a Jewish educational institution remains a mystery. He, after all, had abhorred the Jews all his childhood and adult life. Maybe he hated Jews even as a foetus. The air was pregnant with rumours; some believed he was invited because the rector of the university wanted to be in the Fuehrer’s good books while others thought that he was insistent that he be invited and no one dare refuse the Fuehrer. The reason of invitation, like the season of invitation, wasn’t important.

The audience were all ‘virtual’, via the wireless. There were a few lucky ones who made it face to face with the Fuehrer. Even luckier were those who got a chance to sit on the podium. Three of these were worthy of note: the Rector, a Surgeon who was called Dr Pinnacle (he had assumedly reached the pinnacle of his academic career or so went the word), a Policeman (who remained unnamed) and a Rabbit, who sat inside a black hat similar to the ones which magicians have.

The Fuehrer was known for two things: his powerful oratory, and for pulling out a magic trick when least expected. The rabbit was supposedly placed on the podium by the Gestapo agent who had visited the university a couple of days before the Fuehrer’s address. A few wary Jews sat in the general audience too. Most were dressed in traditional attire while some wore black tuxedos with neatly crocheted kippahs sitting comfortably over their skulls. The rector, while introducing the chief guest, said that the Fuehrer’s leadership had ignited hope in the Jewish community. For those attending the function, ‘hope’ lost a little bit of its sheen that day.

The Fuehrer spoke with usual flair. He thanked the Jews and the university for giving him an opportunity to participate in their celebrations. It appeared that he too was a little surprised at this inclusion. As he briefly thanked the Jews and their university, the rector began to clap in excitement. Dr Pinnacle had higher to rise. His excitement was infectious and everyone else applauded although everyone else knew there were no stars to pluck. The policemen applauded. And the rabbit suddenly sprung out of the hat, excitedly clapping and hailing the Fuehrer. The Gestapo agent looked at him sternly and he retracted back into the darkness.

The Fuehrer began to speak. He spoke on the education of Jewish girls and how badly this needed to be amended. His eyes had a glint when he said so. The glint was visible to the rector and the policeman, because they applauded yet again. The rabbit also sprung out of the hat and clapped and clapped till his claps were the last to resonate in the big hall. It required the stern look of the Gestapo agent to silence him. The rabbit was wary of being pulled out of the hat by the Fuehrer. Every time he was pulled out, his long soft ears ached for a week. Clapping, he assumed was an easier task.

The Fuehrer praised the university for its illustrious alumni and reminded the audience of how the Jewish children should emulate these great men. Mention of children made some in the audience sick. Mr and Mrs Hoffman appeared particularly distressed. Their daughter was recently sent to prison by the Fuehrer’s men. They hated the Fuehrer. And so did Mr and Mrs Ackermann whose teenaged son was lynched by hooligans belonging to the Fuehrer’s party. His crime: wearing the Star of David on the wrong arm, or so went the rumour. Those were the years ripe with rumours of all sorts. Rumours and reality smudged like the colours on a painter’s palette.

By now, the Fuehrer was in great flow. There was never a moment of pause when he spoke. He only spoke what he thought was important for others to hear. To the attentive and weary Jews, he described how his ‘Cleanse Germany Movement’ had helped reduce the school dropout rate of Jewish girls. The audience got a little restless. It was difficult to decipher what was the achievement – Jewish girls, the Cleanse Germany Movement or the Fuehrer. Anyway, the applause went on. The rector and the policeman initiated all the applause and the other Jews followed cue. The rabbit too was enthusiastically clapping when needed.

The Fuehrer ended his speech after half an hour or so. His mesmerised audience clapped again and so did those on the stage. Dr Pinnacle stood up clapping and others followed. The standing ovation was impromptu, or so it appeared in the report filed by the Gestapo agent.

All of a sudden, the rabbit suddenly came out of the hat and started to clap and scream, “Liar, liar, liar! He’s a liar!” His clapping was even more enthusiastic and so was his voice. “He’s a liar! Go back you liar!” The poor rabbit suffered from an unknown psychotic disorder where truth and falsity simultaneously take over a mind. He was sure many had a similar illness but no one confessed to it. The whole hall was reverberating with thunderous applause. The din drowned the little rabbit’s voice.  He kept screaming till two muscular hands grabbed his ears and stuffed him back into the hat. The Gestapo agent was very angry, and his report spoke of the need to unmask the conspiracy behind the rabbit’s action.

The rabbit himself was buried alive in a rabbit hole with all his feet tightly tied.

A few days later, a placard appeared on the mound covering the rabbit-hole. It read:

The Fuehrer went back to his usual business. He soon forgot the visit to the university, and rabbit, but not the Jews.

(PS: Fiction is the work of imagination but in the times in which we live, imagination is no fiction)