For the Rohingya in Bangladesh's Refugee Camps, Living is Surviving

The lines in front of a truck of relief 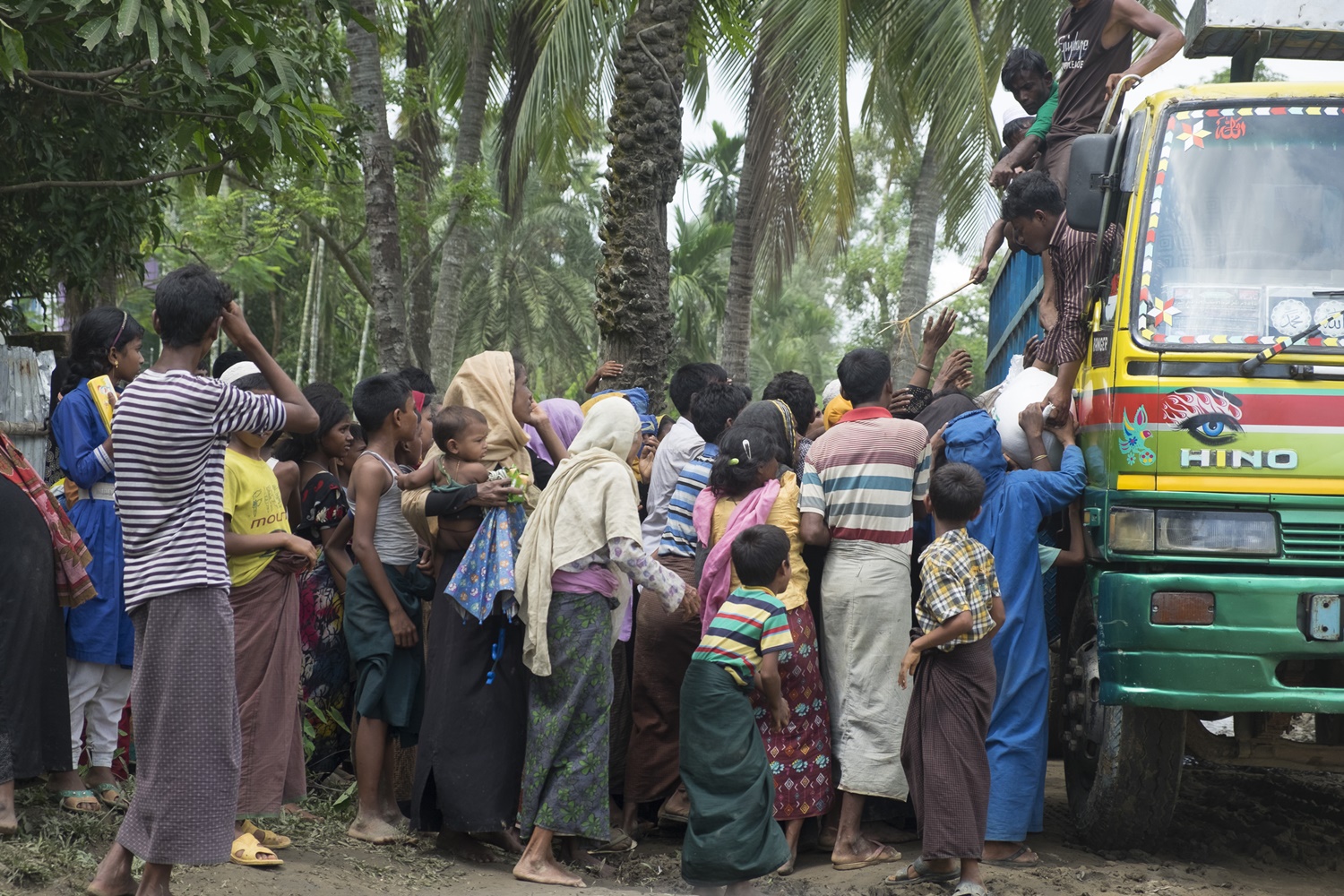 The lines in front of a truck with relief for the Rohingya. Credit: Parvez Ahmed

For Rohingya refugees, life inside one of the camps in the Southeastern part of Bangladesh is a cycle comprising four activities – eating, sleeping, defecating and waiting with baited breath to get minimal ‘fuels’ for the functioning of the first three.

Food and proper place to sleep are not easy to come by and suitable spaces to meet sanitary needs are even harder to find. People find themselves operating on sheer survival instinct, born of bitter necessity.

The camps are a grim colony, full of heartache and sickness. The largest one – Kutupalog – is surrounded by an ochre moonscape. Entering its perimetre requires a short hike through unkempt crude stairs carved out of hills. In the valley below, rainwater accumulates in viscous, muddy ponds.

Inside the camp – erected mostly on small hills which were once covered with vegetation – the labyrinths of makeshift dwellings, made out of clay, plastic and tarpaulin, is overwhelming. The grid of dirt (muddy when it rains) lanes in between are occupied by naked kids and underfed adults. 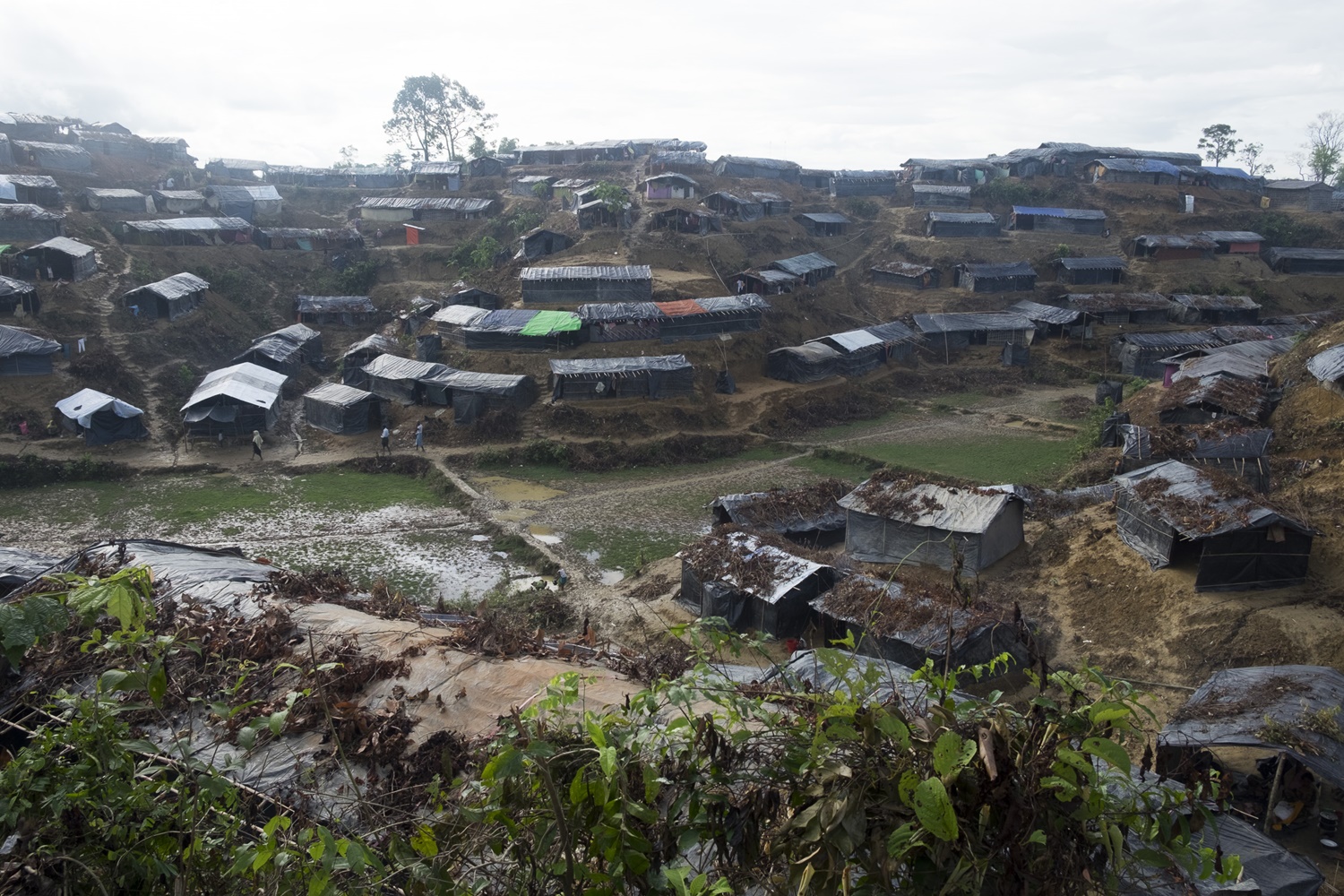 During the day, if it doesn’t rain, they sit on these lanes with vacant eyes. Each makeshift house is inhabited by at least seven or eight people. Inside, it’s boiling hot, since, on top of the hills, there is no filter between the scorching sun and the thin layers of plaster roofs. Outside at least there is some intermittent breeze.

For the uninitiated, the breeze seems ‘sort of unpleasant’ because of the stench it carries – stemming from sweat, unbathed skins, stale food, human feces and untreated waste of all kinds – but for 18-year-old Tahura, it’s a relief after a long night.

Each night inside the camp, Tahura has to make it through a near-sleepless night, as her three-month-old daughter – Amina – cries out of hunger. “I can’t produce enough breast milk as I don’t get much to eat or drink.”

Tahura’s husband was murdered by the Myanmar military forces. She fled from her charred village in Maungdaw district and waded through the marshland and paddy fields for three days to reach the Kutupalong refugee camp with baby Amina. 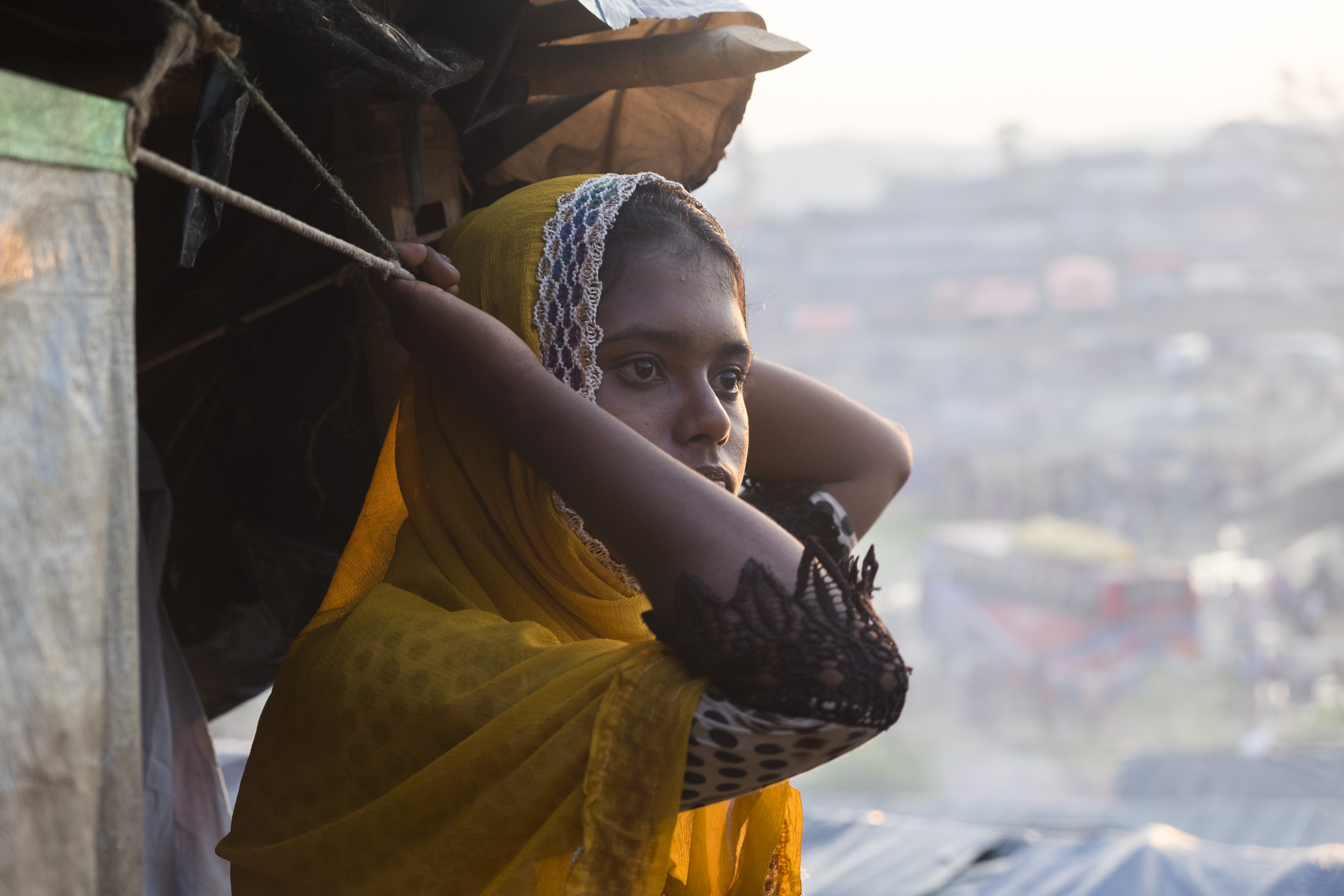 By the time she arrived, caked in filthy paddy muck, Kutupalong was exploding with hundreds of thousands like her. Fresh arrivals were usually directed to the camp’s perimeter, a place where refugees must sculpt their own shelter out of mud and plastic sheets.

Building such a shelter was not possible for Tahura so she had to share one with six others. “I fear they feel annoyed with Amina’s constant crying at night.”

There are other problems for Tahura after nightfall. The nearest toilet is a bit far from her shelter. She needs to trudge down through a hill and then climb up through another one to reach it. She cannot venture such an arduous walk in the dark holding Amina. Besides, late at night, when others sleep, she cannot ask anyone to keep Amina. So she sits tight the whole night. 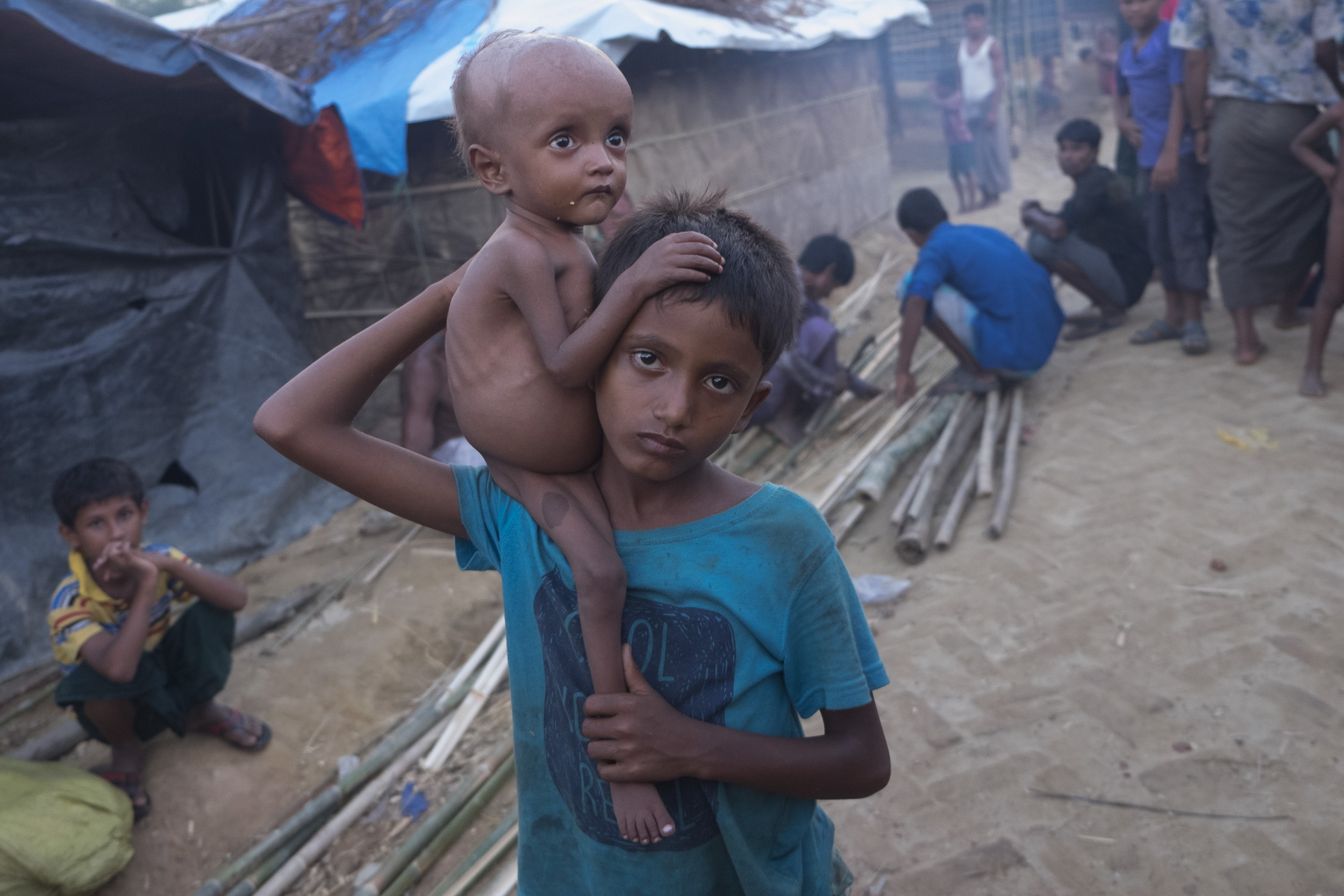 Malnourished children are a common sight inside the camp. Credit: Parvez Ahmed

For the last few days, Tahura has been suffering from severe lower abdomen pain, which the doctors in the camp suspect, is the result of severe constipation and urinary tract infection. The discomfort of the mother’s malnourished and dehydrated body is transferred to the child.

“I have heard from others that in some lines (relief distribution lines), they give baby milk. I don’t know which one it is,” Tahura said in a strange nonchalant voice, “The lines I go to only give biscuits, water, rice and lentils.”

With her starving three-month old daughter, Tahura barely indulges in cooking a hot meal with the rice and lentils that she gets. “Besides, where will I get the firewood for cooking?” she asked. 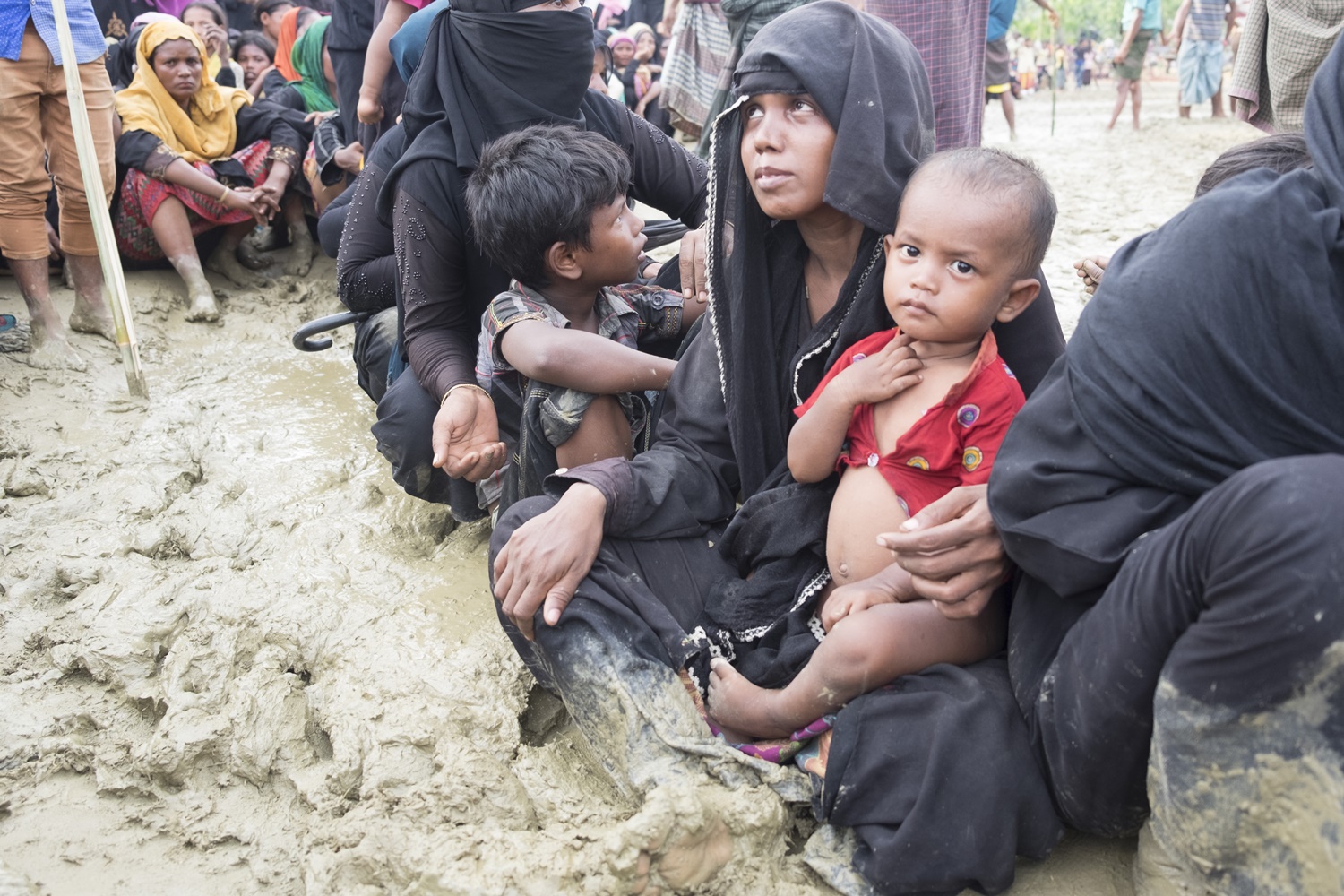 Rohingya women and children in a long line for relief. Credit: Parvez Ahmed

Inside the camps, dry firewood for cooking is a difficult thing to find. A prolonged rainy season in Bangladesh makes heavy rain a regular thing even in October, making things worse for the Rohingya refugees.

“We have been sitting on our relief of rice and lentils for two days. My wife cannot cook as there is no firewood,” said Idris Ali, a refugee in Kutupalong. Ali, who arrived in the camp with his wife and two small children said, aside from rain which makes all the trees nearby wet and soggy, the refugees in the camps are given instructions by the district authorities not to cut trees.

This is because the camps which are constructed on hills by cutting trees are at the risk of landslide due to heavy downpour. In June this year, more than 150 people had died from landslides in the same Chittagong Hill Tracts region after heavy rain continued for some days. To stop such incidents from happening again, the district administration of Cox’s Bazaar has put restrictions on cutting further trees from the hills near the camp.

Ali however, barely has any time to consider ‘far-sighted’ matters like landslides due to deforestation. For him, the need for firewood for cooking is immediate.

“It would be better for us if we were provided with cooked food that we can eat. Without firewood, rice and lentils become useless,” said Ali.

Some relief organisations distribute cooked hot meals to the refugees in different camps. Turkish Cooperation and Coordination Agency (TIKA) have been distributing cooked meal – rice, lentils, chicken curry with potato to around 16,000 refugees since mid-September. 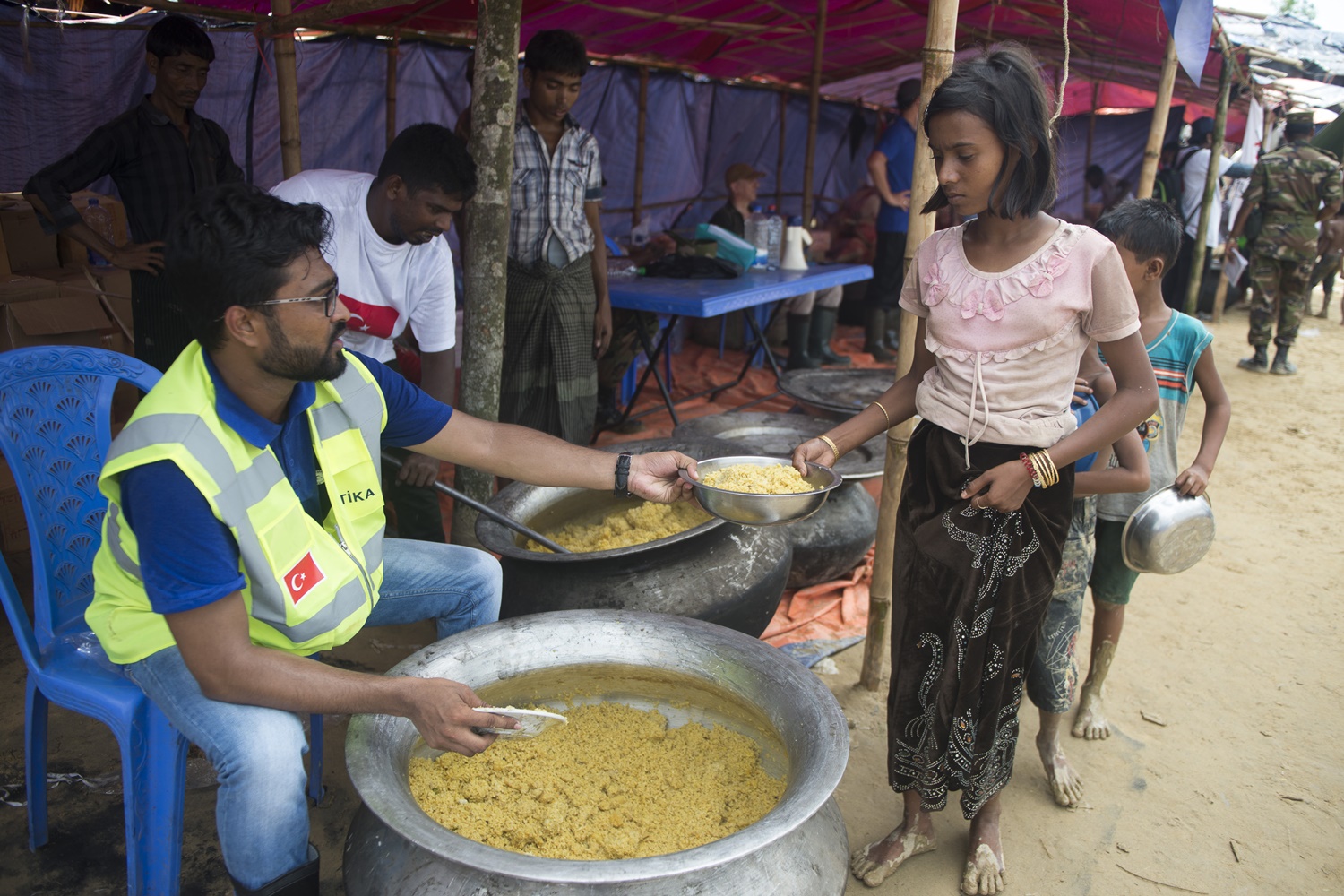 Kazi Awal Hossain, a coordinator from TIKA said that these food are given only to children and women. “They are the most vulnerable ones.” The Turkish government has plans to double the size of the kitchen but “the refugees keep coming and it will be impossible to provide meals to all of them.”

The Cox’s Bazaar district administration has also been serving cooked meals with the funding from the government’s exchequer at 12 different spots in Kutupalong and Balukhali camps since September. In each spot, meals for 2,000 people are being served.

Also read: Finding Hope for the Rohingya in Unexpected Places

Additional Executive Magistrate Khaled Mahmud, who has been heading the district administration’s Rohingya Cell said the number of these kitchens “is far lesser than what is needed” but they are running them in their effort to overcome this crisis. “The kitchens will operate until all refugees are brought under a relief programme,” said the magistrate.

Meanwhile, access to clean water and sanitation facilities remain severely scarce despite aid and assistance from the Bangladesh government and a large number of NGOs and aid agencies. The speed and scale of the Rohingya tide is superseding the flow of aids. Due to the scarcity of proper toilets, a large number of Rohingyas are defecating in close proximity to the water supply. Tests reveal that some water sources are contaminated with coliform bacteria. 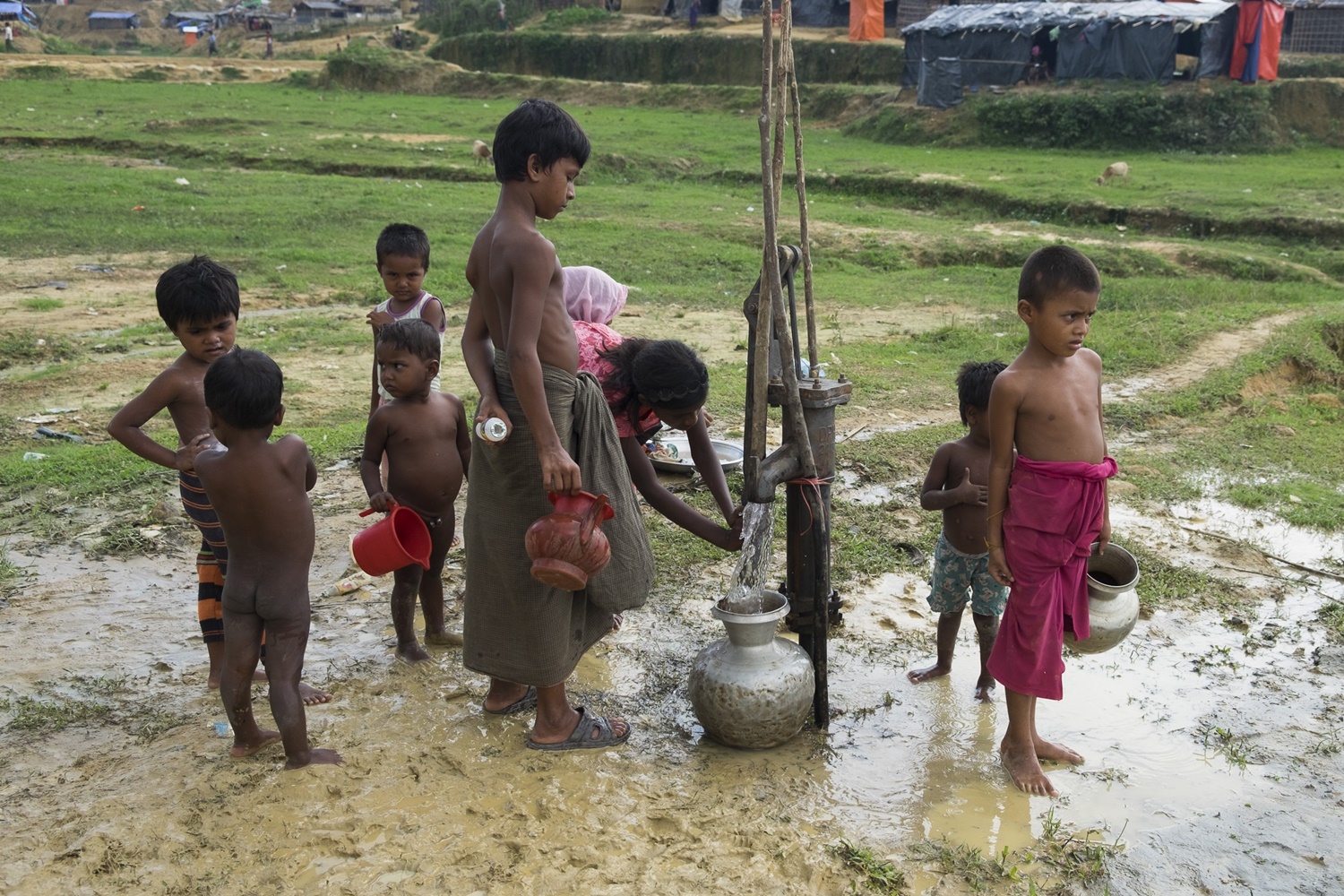 A tube well in the camp. Credit: Parvez Ahmed

Taimur Hasan, Assistant Public Health Officer of the UNHCR said the number of diarrhea cases is on the rise in Kutupalong and Balukhali camps since the beginning of September. UNHCR has opened three diarrhea treatment centres with 80 beds since October 2 but the doctors and volunteers inside have been overwhelmed with the number patients.

“Unless these refugees get access to safe drinking water and sanitation facilities, there is a chance of having a cholera outbreak here,” said Hasan.

Different organisations including Brac, Wateraid, Gonoshasthyo Kendra have constructed over 600 toilets in different camps but that number seems minuscule in front of the number of refugees, which is over 700,000.

To address the water and sanitary crisis, the Public Health Engineering Department (PHED) of the Bangladesh government has plans of constructing a total of 1,200 sanitary latrines in the refugee camps. A total of 700 such toilets have already been constructed.

Rokonuddin Khaled, Assistant Engineer of the PHED, Cox’s Bazaar, said the rest of latrines will be constructed by the end of October. The PHED has also dug over 500 shallow and deep tube wells for providing water. It has plans of digging up to 1200 tube wells.

Like others, Khaled too said that these numbers seem small in front of the large number of refugees. “I am in no position to talk about our government’s policy but I believe these all are just temporary measures taken to tackle the immediate humanitarian crisis.” 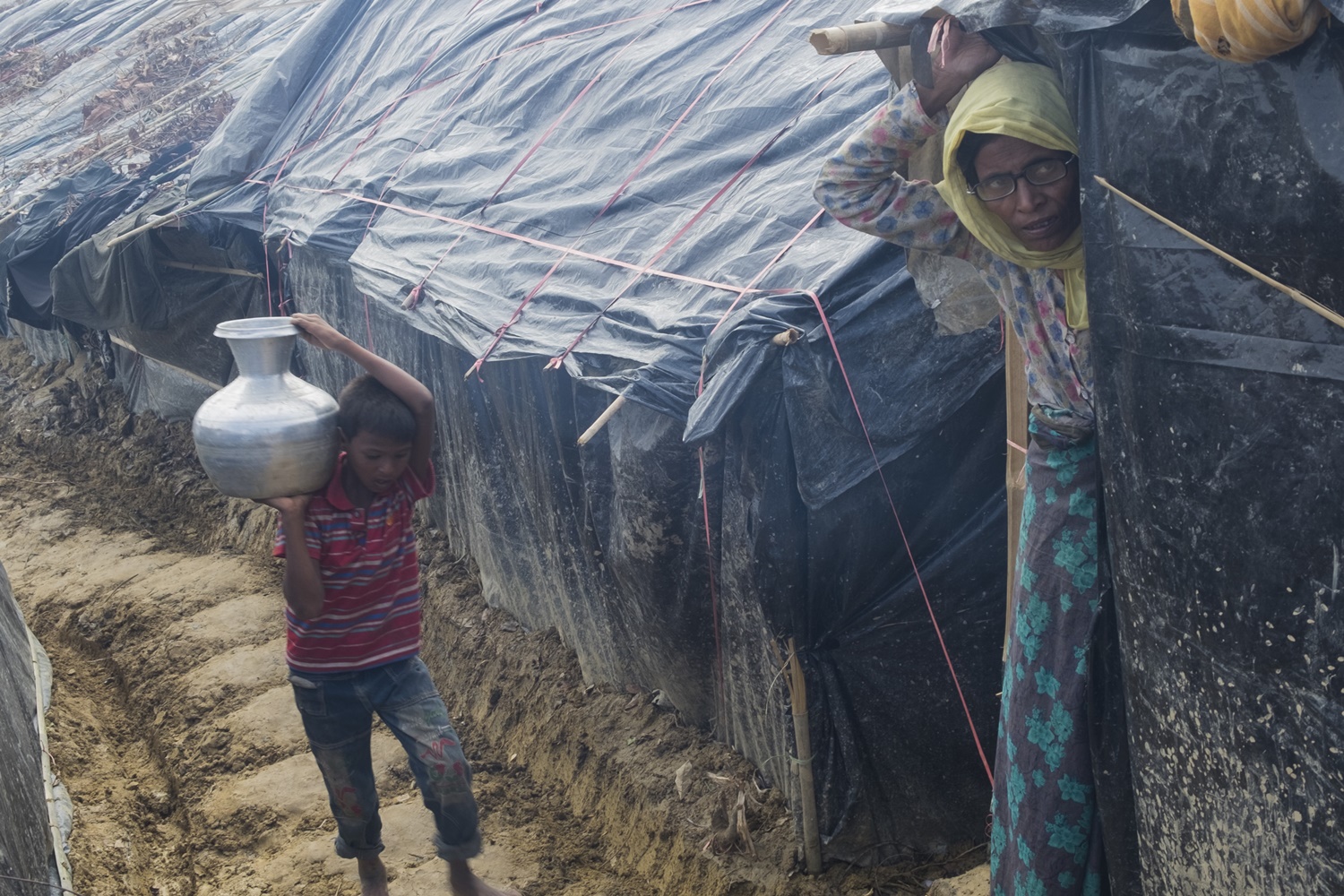 There seems to be no long term solution in the offing. The Myanmar government said on October 2 that it would take back the Rohingya refugees who entered into Bangladesh after August this year. The Rohingya in the Bangladeshi camps however have no confidence on the current Myanmar administration.

Nurul Absar, an elderly refugee in Kutupalong believes he will be killed if goes back.

“They (Myanmar military) burnt my home and killed my son. I was spared  but I have seen what they have done to others. I have no wish to go back there. Here, I am at least safe in the camp.”

The diplomatic channels of Bangladesh are trying to reason with their counterparts in Myanmar but they too know that the repatriation process will not be easy. A.H. Mahmud Ali, the foreign minister of Bangladesh, said the condition based on which Myanmar will take back the Rohingya refugee is ‘unrealistic.’

During a meeting at a state guest house with foreign diplomats and representatives from different countries on October 9, the Mahmud Ali said, the repatriation of Rohingya based on the 1992 Joint Statement is not possible since “the situation of 1992 and the current one are totally different as half of the Muslim villages in the northern Rakhine state of Myanmar have been burned down and are still being burned.” 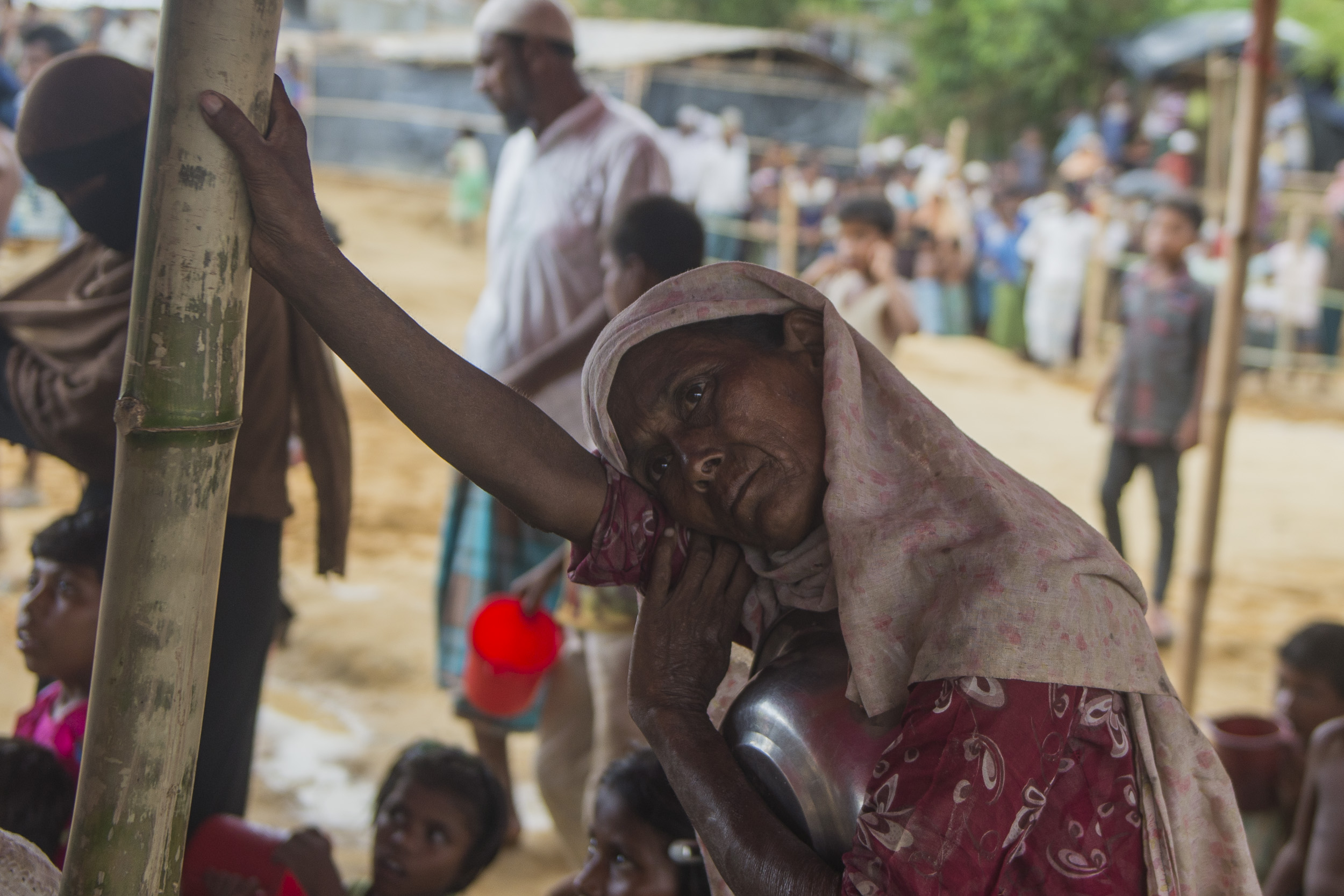 A Rohingya woman in the camp. Credit: Parvez Ahmed

Meanwhile, sensing the futility of sending back the Rohingya to Myanamr, the Bangladesh government has taken a decision to construct one massive refugee camp. The proposed camp will be the world’s largest, dwarfing Uganda’s Bidi Bidi and Kenya’s Dadaab, which each house around 300,000 refugees, according to the International Organization for Migration.

The plan – to combine the sprawling Kutupalong and Balukhali camps, as well as fold in surrounding makeshift settlements and eventually relocate Rohingya from more than 23 informal camps along the border to the new zone  may seem a logical way to provide services to such a large population.

Md Ali Hossain, deputy commissioner of Cox’s Bazar said, managing scattered camps across the region is a difficult task. “If we can bring all of them under one huge camp, then it will be easier for us to cater the needs for the Rohingya refugees.”