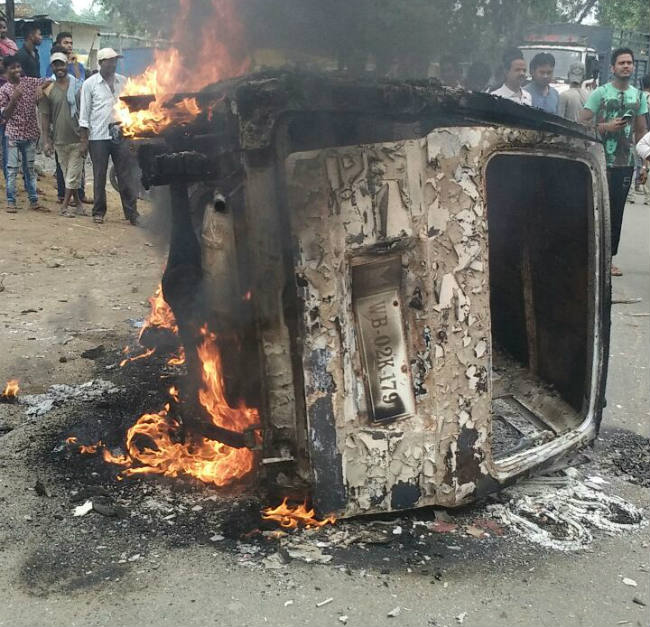 The burnt van which was being driven by a Muslim man accused by thugs of carrying beef. Credit: Prabhat Khabar

New Delhi: Even as Prime Minister Narendra Modi broke his silence Thursday morning on the recent lynchings the country has witnessed in the name of the cow, vigilantes in the BJP-ruled state of Jharkhand have claimed another victim.

A man accused of carrying beef was beaten to death around 9 am on Thursday in the Bazaar Tand area of Ramgarh district, Prabhat Khabar reported.

A group of people stopped him and brutally attacked him, the sources said. His van was set on fire too.

Police personnel rescued him and took him to a hospital where he died during the course of treatment.

It is not clear if the “banned meat” survived the fire and whether the police will insist on forensic analysis of it, as their counterparts in Uttar Pradesh did in 2015 when Mohammed Akhlaque was murdered near Dadri over suspicions that he had stored beef in his fridge.

This is second such case in Jharkhand in the last three days. Earlier this month, another man in the state, Ainul Ansari, was attacked on suspicion of carrying beef.

In Giridih district, a mob thrashed a person and set on fire his house after a cow head was found.

(With inputs from IANS_