As the Ayodhya agitation gained ground, non-BJP parties were too busy with their electoral concerns to notice its significance. 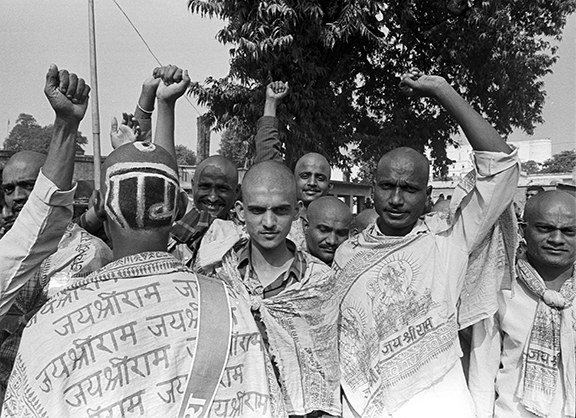 Note: This piece was originally published on December 6, 2017 and is being republished on November 8, 201.

Ever since I wrote my first piece in several years on the Babri Masjid demolition a few weeks ago, I was gnawed by the sense that it was not enough to blame the Sangh parivar and P.V. Narasimha Rao alone for the events that legitimised the Bharatiya Janata Party (BJP), “political outcasts” before the agitation that changed the fundamental characteristics of Indian polity. But what are other parties guilty of? The list of parties whose role in allowing the Ram janmabhoomi agitation and the Hindutva idea to gain such a stranglehold on the Indian polity begins with the Congress party headed by Rajiv Gandhi  and is followed by all parties ranging from those in what eventually became the Janata parivar, regional outfits and even the main communist parties. However, given the fact that none of these parties directly participated in mobilising support for the agitation or exhorted their cadre to assemble at Ayodhya on various occasions, what can they accused of?

Last week, as part of a quarter-century-old practice started by the American Dialect Society, dictionary.com selected the word ‘complicit’ as its ‘Word of the Year’. The selection was done because of the phenomenal increase in the number of people who looked up the word this year. This word, which means “choosing to be involved in an illegal or questionable act, especially with others” was chosen for reasons that are significant not just in the American political context, but also summarises the role of all political parties besides the BJP in making legitimate the idea which propelled the agitation for the Ram temple at Ayodhya in place of the 16th-century mosque.

The ‘success’ of the Sangh parivar’s Ayodhya agitation had its origins in two primary causes. First, when the demand for a temple in place of the mosque was first voiced in the early 1980s and an outfit called Ram Janmabhoomi Mukti Yagna Samiti (RJMYS) was formed in April 1984, it was dismissed with a laugh.

India at that time was beset with militancy in Punjab and had little time for what it felt were marginal groups. One such group, the Vishwa Hindu Parishad-backed Dharam Sansad, a motley assembly of Hindu priests, evoked little political interest when they were allowed use of the government-owned Vigyan Bhawan for two days. At the end of the conclave on April 8, a nearly 1,000-strong gathering of sadhus thumped the tables when the charter of demands was read out. It asked the government to “restore” the three shrines in Ayodhya, Mathura and Varanasi to Hindu society as the issues were a “cause of great anguish”.

Of the three shrines, the demand for the one at Ayodhya was prioritised and the RJMYS was established to spearhead the agitation for its pursuit. The decision had come at the end of an almost year-long process involving the Rashtriya Swayamsevak Sangh leadership, who worked with an assorted group comprising former Congress leaders of significance, religious leaders from Ayodhya and most importantly, Mahant Avaidyanath, then a Hindu Mahasabha leader and now known as the spiritual guru and predecessor of Yogi Adityanath. In hindsight we know the Ayodhya issue was picked up after a conscious search for the right emotional issue but the political adversaries of the Sangh parivar were completely oblivious to the concerted effort.

Also read: Twenty-Five Years On, India Has Still to Live Down the Shame of the Babri Masjid’s Demolition

The second failure of the secular forces was that when the demand for the Ram temple was voiced, these parties concluded that the agitation had no future because the idea was too obscurantist and would not ring a bell with the majority of Indians, who were considered by established political parties as “inherently secular”. It is worthwhile recalling that the BJP at that time was still a fledgling party with little or no legislative presence in most states. The energies of almost every political party – barring the BJP – at that time was to cobble up another united conglomerate to fight the Congress party. Anti-Congressism was the credo of non-Congress parties and they had little knowledge about the intricate arrangement within the Sangh parivar and the long-term plans being drawn.

It is not that centrist parties, the Congress and even the Left had no idea of the linkages between the BJP and the RSS. The Janata Party government, after all, had collapsed in a heap a few years earlier, principally on the issue of dual membership of the former Jana Sangh members. The bogey of the RSS was not unknown in Indian politics but throughout the 1980s, as the Ayodhya agitation gathered ground, other non-Congress parties allowed their political decisions to be motivated by attempts to build another broad anti-Congress combination.

On the other side, the Congress party under Rajiv began pandering to both majority and minority communal forces. The 1980s was the decade when the influence of religion began to be felt in politics more than ever before. Yet, the primary concern of all secular and democratic parties was more in the realm of immediate electoral issues, instead of being bifocal with an eye on the future character of politics.

The 1989 elections saw the dramatic emergence of the BJP – it increased its presence in the Lok Sabha from two to 85. The election was preceded by two significant developments within the anti-Congress, non-BJP parties. First, the Lok Dal, Janata Party and Jan Morcha merged to form the Janata Dal. Second, the formation of the National Front comprising the Janata Dal, Congress (S) and regional parties – the Telugu Desam from Andhra Pradesh, the Dravida Munnetra Kazhagam from Tamil Nadu and Asom Gana Parishad from Assam – was announced. The BJP decided to retain its distinct identity.

Leaders of the newly formed Janata Dal and those from the regional outfits did not comprehend why the BJP refused to merge with the other parties – the Sangh parivar was by now clear that with the Ayodhya agitation securing significant support from the people, it was important for the BJP to separately pursue its long-term ideological agenda. In its myopic quest to defeat the Congress, leaders of the Janata Dal and other constituents of the National Front entered into strategic seat adjustments with the BJP on one hand and Left Front parties on the other.

The V.P. Singh government too was supported by the BJP on the right and the communist parties on the left. This made the BJP a legitimate political party and it was able to end its isolation. The collapse of that government, followed by the fall of the Chandrashekhar government and the consequent 1991 Lok Sabha polls, saw the political isolation of the BJP once again. While in 1989 the party contested 225 seats, securing a vote share of 11.4%, in 1991, after its decision to go it alone, it put up candidates in 477 seats. This poll marked the emergence of the BJP as the second largest party both in terms of number of seats (120) and in terms of vote share (20%). The years in between 1991 and 1995 marked the continuation of the phase of the BJP’s seclusion. When the party realised that it would not succeed in further expanding its social base on its own, it made a strategic leadership change – propping up Vajpayee as its prime ministerial candidate and relegating the hard-nosed L.K. Advani to the background.

The move was a success, as this was just the kind of excuse that centrist parties were waiting for and in 1998 the BJP formed its first successful coalition government with a large number of non-Congress and non-communist allies. The Left Front leaders by now realised the grave error they made by providing the BJP with legitimacy, but by then it was too late. The stability of the second NDA government between 1999-2004 confirmed that the BJP had emerged as one of the two ‘natural’ parties of governance. Significantly, while the NDA government did not pursue the three contentious issues central to the BJP’s agenda – construction of the Ram temple, abrogation of Article 370 of the constitution and introduction of a universal civil code – and instead adhered to the mutually agreed National Agenda of Governance, the party did not abandon its core issues. Despite the party declaring that the issues could be taken up only when the BJP had a majority of its own, coalition partners remained in government without giving scant thought to gains that the BJP would make by heading a coalition.

As the political narrative has developed, after a decade long setback between 2004 and 2014, the BJP has emerged as a stronger party. This time the party has a majority of its own and though there are coalition partners, their leveraging capacity is lower than during NDA-I. The tactical use of soft Hindutva by the Congress in the ongoing polls in Gujarat suggests that even the Congress has now become directly complicit in making the Hindutva idea more socially acceptable. The 25th anniversary of the demolition of the Babri Masjid is an apt moment to acknowledge how every party played a key role in securing greater acceptance for the Sangh parivar’s ideology of cultural nationalism. The tragedy is that while the so-called secular forces may celebrate a possible upset verdict in Gujarat, there will be little decline in the stranglehold of the Hindutva idea. However harsh this may sound, it has to be accepted that though the BJP was out of power for a decade after 2004, it bounced back with a vengeance due to the inability of the Congress and other so-called secular leaders to reverse the ideological gains made by the BJP and its affiliates in the parivar.