How Dams Deprive the World's Rivers of Sediment

River-borne sediment is trapped behind the world’s large dams, depriving areas downstream of marshes and wetlands, which act as buffers against rising seas. 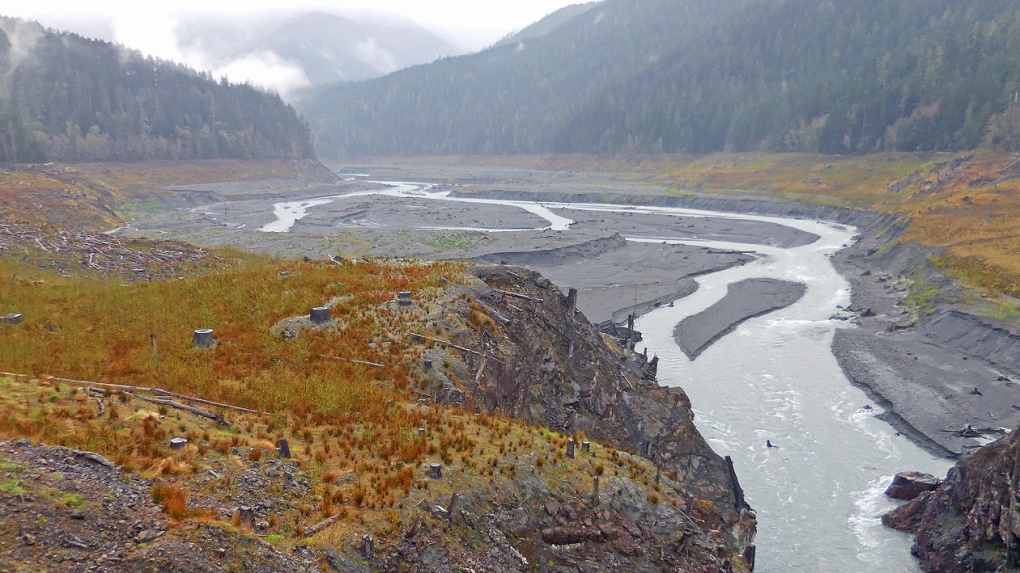 Vegetation is returning to this Elwha River valley in Washington state after two dams were removed. Credit: Olympic National Park/Flickr

In September 2011, after 20 years of planning, workers began dismantling the Elwha and Glines dams on the Elwha River in northwestern Washington state. At the time, it was the largest dam removal project in US history, and it took nearly three years for both barriers to be dismantled and for the river to once again flow freely.

Over the course of their nearly century-long lives, the two dams collected more than 24 million cubic yards of sediment behind them, enough to fill the Seattle Seahawks football stadium eight times. And since their removal, the Elwha has taken back the trapped sediment and distributed it downstream, causing the riverine ecosystem to be rebuilt and transformed. Massive quantities of silt, sand, and gravel have been carried to the coast, resurrecting a wetlands ecosystem long deprived of sediment.

“We’ve seen a big expansion of coast landforms,” says Jonathan Warrick, a research geologist with the US Geological Survey who studies the after-effects of the dam removal. “The beach is 500 feet offshore from where it used to be and there is this brand new wetland complex that has developed behind the beach.”

Scientists are now beginning to fully appreciate the life-giving effects of sediment, which some researchers, as well as people who live along waterways, once viewed as a malevolent force that choked the life out of rivers, streams, and wetlands. Now, as global warming steadily melts glaciers and polar ice sheets, quickening the pace of sea level rise, scientists say that a severe shortage of river-borne sediment – most of it trapped behind dams – will increasingly be felt along the world’s coasts.

“Ten or twenty years ago most wetlands scientists in most places viewed sediment as a negative,” says Richard Ambrose, a marine ecologist at the University of California, Los Angeles. “Too much sediment would come in and bury the marsh. Now people realize sediment is a resource, and we need it to keep up with sea level rise.”

Billions of cubic yards of natural river-borne sediment are trapped behind the world’s 57,000 large dams and countless small ones. This is material that otherwise would have been swept by river currents downstream and to the coast, where it would help build up marshes and other wetlands to act as a buffer against rising seas. Now, experts are searching for ways that this trapped sediment can be liberated and made available again to the rivers and estuaries to mitigate the loss of wetlands.

“Sediment allows coastal habitat to grow, adapt, and maintain itself while sea levels change,” says Robin Grossinger, a senior scientist with the San Francisco Estuary Institute, which is working with agencies and conservation groups to increase the extent of wetlands in the San Francisco Bay from 50,000 acres to 1,00,000. “It’s almost like it’s the food – the nutrients, minerals, and vitamins – these systems need to grow and adapt, and we are starving them of that.”

Scientists have for decades understood the impacts of engineering and flood-control projects on the US’s largest river, the Mississippi. Before the US Army Corps of Engineers began radically altering the Mississippi’s natural rhythm of seasonal flooding, the river was so rich in transported sediment it used to create its massive delta that it was called a “land-making machine.”

But an elaborate network of levees, floodgates, and drainage canals have created a situation in which much of the Mississippi’s sediments are no longer allowed to flow over Louisiana’s coastal marshes and wetlands. Deprived of the river’s land-making capabilities, southern Louisiana has lost 2,000 square miles of land and 20% of its wetlands since the 1930s. Officials are now planning to build sediment diversion projects that mimic the natural flood cycle so that sediment and freshwater can rebuild and sustain Louisiana’s coastal wetlands. 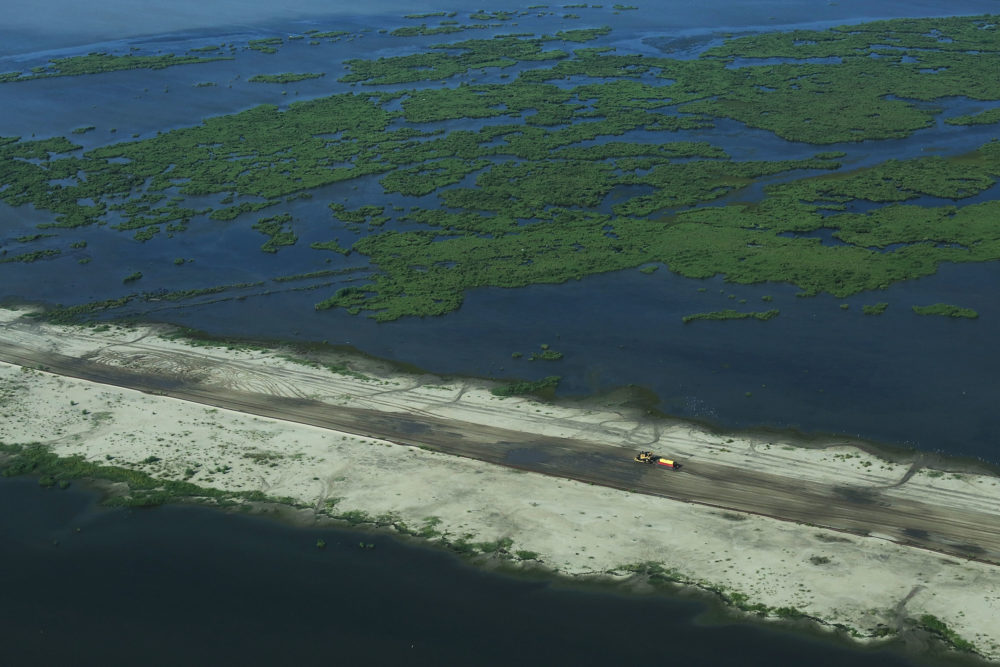 A similar appreciation of the role that dams play in robbing rivers and wetlands of much-needed sediment flows is now moving to the forefront of ecological studies and river engineering. The need to restore sediment flows to coastal environments has become more urgent in recent decades as development, agriculture, aquaculture and other human activity has destroyed or badly damaged about two-thirds of the world’s wetlands. Some 90% of the wetlands in San Francisco Bay are gone, and 75% of the wetlands in southern California have disappeared. Some restoration projects are now underway, but sediment – and an economically efficient way to deliver it – is urgently needed.

Wetlands – including marshes, sea grass beds, estuaries, and mangroves – are remarkably rich and productive ecosystems, providing nesting habitat and nurseries for fish, birds, and other wildlife. According to the US Environmental Protection Agency, a third of the threatened and endangered species in the United States live solely in wetlands and half of them spend part of their life in a wetland environment.  And wetland soils also have some of the highest amounts of stored soil carbon of any ecosystem. Studies also show that the sediment that has gathered behind the world’s dams is a significant source of methane, a greenhouse gas much more potent than CO2 that seeps from organic material into the atmosphere.

Researchers around the world are now searching for solutions to transport more dam-captured sediment downstream in rivers. Dam removal is becoming increasingly common. Across much of Europe – especially Spain, the UK and Sweden – hundreds of small dams and some large ones have been removed in recent years.

There are, however, ways to restore the flow of sediments that do not involve dam removal. Sometimes sediment is simply dug up and moved or channeled around the dam in pipes or sluices. Bank stabilization structures can be removed in the river sections where sediment is needed so that more sediment can enter the river and flow downstream.

“It’s a tricky issue,” says Warrick. “There’s probably a unique best answer for each river, based on what type of river, how much sediment, when the sediment moves, the natural cycles and what the dam does. Every dam works differently. Some are used for flood control, some for power generation, some for water distribution. There’s not one answer for all this.”

Numerous other efforts are underway to help make needed sediment available for wetlands. The salt marsh wetlands of Jamaica Bay were replenished with sediment from the dredging of New York-New Jersey Harbor, for example.

Part of the answer, says Brett Milligan, an assistant professor of landscape architecture at the University of California, Davis, is changing the way we think about sediment. To that end he and colleagues formed the Dredge Research Collaborative and created DredgeFest, a series of conferences around the country attended by scientists, government officials, conservationists and the public to raise awareness about the essential role of sediment in ecosystems. “It’s something people don’t see or think about,” he says. “DredgeFest is a way to raise awareness and look for solutions.”

Rather than consider sediment a waste product, Milligan would like people to think more about a “sediment-shed” – akin to a watershed – “and how this precious resource can be utilized,” he says.

Ambrose is working on a five-year project that is restoring the wetlands near Seal Beach Harbor in southern California with an experimental technique called “thin-layer sediment placing.” During the first year, contractors sprayed a slurry of sediment with a firehose across 8.5 acres of marsh at risk of inundation. Over the next four years, researchers will see how well the vegetation comes back thanks to the sediment.

“With some marshes you’ll be able to give them this boost and their natural processes will help them enough to allow them to keep up for a long, long time,” says Ambrose. 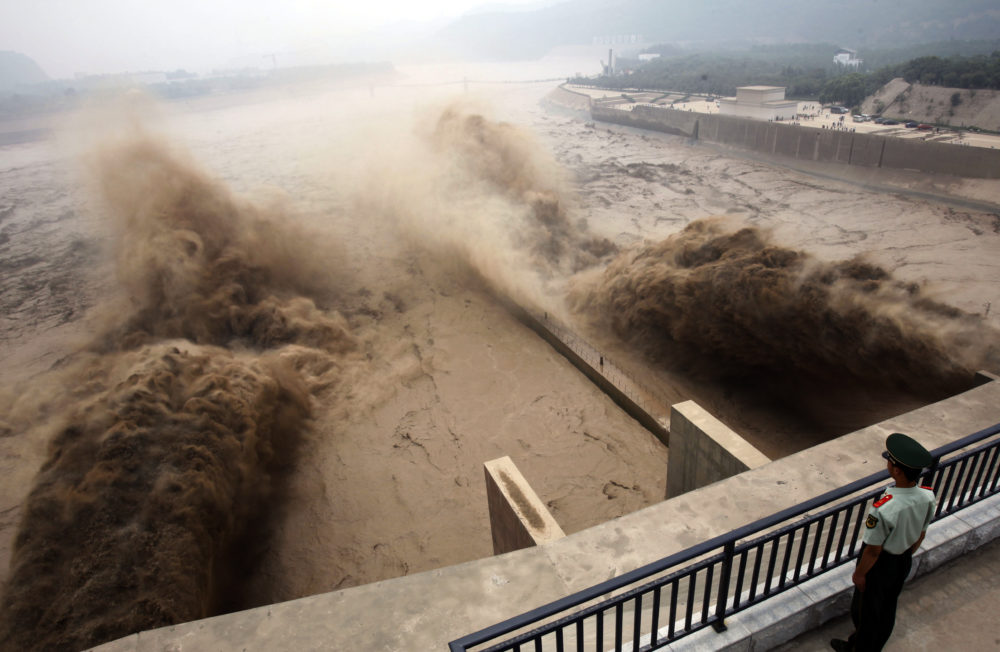 Around the world the search is on for ways to restore sediment flows.

In the Netherlands, engineers use something called a ‘sand machine’ – a massive manmade peninsula built of sand – that allows waves, wind and tides to more naturally build up beaches along the coast, in part to protect the sea from claiming wetlands.

The Xiaolangdi Dam on China’s Yellow River – so high in sediment it carries three times the amount of sand, silt, and other material once transported by the Mississippi – has specially built portals that allow sediment to be discharged downstream from the dam to prevent flooding and increase the capacity of the reservoir. For up two weeks each year, massive amounts of both clear and sediment-filled water is flushed below the dam to allow it to flow down the river

In the San Francisco Bay area, one experiment with dredged sediment will harness natural forces. “We want to see if there are ways that the sediment dredged from the shipping channel could be strategically placed in parts of the estuary where it could be moved by the tide to the right place, where it could become mud flats and beaches and marshes,” says Grossinger.

In the long run though, sediment replenishment projects can only do so much. Sea levels are projected to rise this century by three to six feet, and possibly more. Under such a scenario, vast areas of wetlands and coastlines are likely to be inundated, regardless of efforts to restore sediments to these ecosystems.

“When we are talking about 2100 or 2150 it’s quite possible that no marsh will be able to keep up with a natural sediment supply by that time,” says Ambrose. “A lot of wetlands are probably going to disappear.”

Jim Robbins is a veteran journalist based in Helena, Montana. He has written for the New York Times, Conde Nast Traveler, and numerous other publications. His latest book is “The Wonder of Birds: What they Tell Us about the World, Ourselves and a Better Future”.

This article was first published on the Yale Environment 360 Blog.