China's actions have brought about what it should be trying to deter, i.e. closer India-US coordination. This means the decision was taken at the highest level in China for larger strategic reasons, not just tactical military convenience.

This article is the second of a three-part series on the past, present and future of India-China relations. See also Part 1 .

The India-China relationship has been through a crisis in 2020. The June 15th incident in the Galwan Valley, which claimed the lives of 20 Indian soldiers, and subsequent firing incidents, the first bloodshed in 45 years, followed an unprecedented build-up of the People’s Liberation Army (PLA) along the Line of Actual Control (LAC). In eastern Ladakh, the PLA moved forward into areas previously under Indian control, and has been preventing Indian patrols from accessing patrol points that they consistently visited in the past in Depsang, Hot Springs-Gogra-Kongkala, near the Galwan river and around Pangong Tso.

What China did in April-May by changing the situation on the ground, shifting the LAC, and preventing Indian patrols on territory hitherto controlled by India was a fundamental and consequential shift in behaviour, a successful salami-slicing manoeuvre. Because India’s initial response was non-strategic, we were forced to cede ground, and now face a fait accompli.

Both deterrence and strategy had failed. By occupying territory on the Indian side, China put the onus of escalation on India if it wishes to restore the status quo. India considerably increased her deployment along the LAC in response to the Chinese military moves. In a delayed and partial response on August 29-30, 2020, India occupied some heights south of Pangong Tso on our side of the line. The government of India, for good reasons, seems unwilling to risk the wider war entailed by either vertical escalation (mounting major operations to evict the PLA) or horizontal escalation (to other sectors or to the maritime domain, for instance).

India, and China, both now say that they wish to negotiate a solution to this crisis. But each defines the immediate solution differently: India as China withdrawing to restore the status quo as it was before May 2020; China as India withdrawing from present (changed) positions and disengaging, leading then to de-escalation, the creation of buffer zones, and, finally, to the negotiation of new confidence-building measures (CBMs).

China has tried for some years to freeze present Indian force levels and infrastructure on the border, thus baking in the present asymmetry in China’s favour. She has now used that asymmetry to change the situation on the LAC in her own favour. Before 2020, India resisted this. Denying China the ability to do so again, (and again), would require a very different Indian Army posture on the border – a strategy of deterrence by denial rather than by punishment, preparing not only for the big conventional conflict that may never come but for multiple small salami slicing manoeuvres by this adversary. 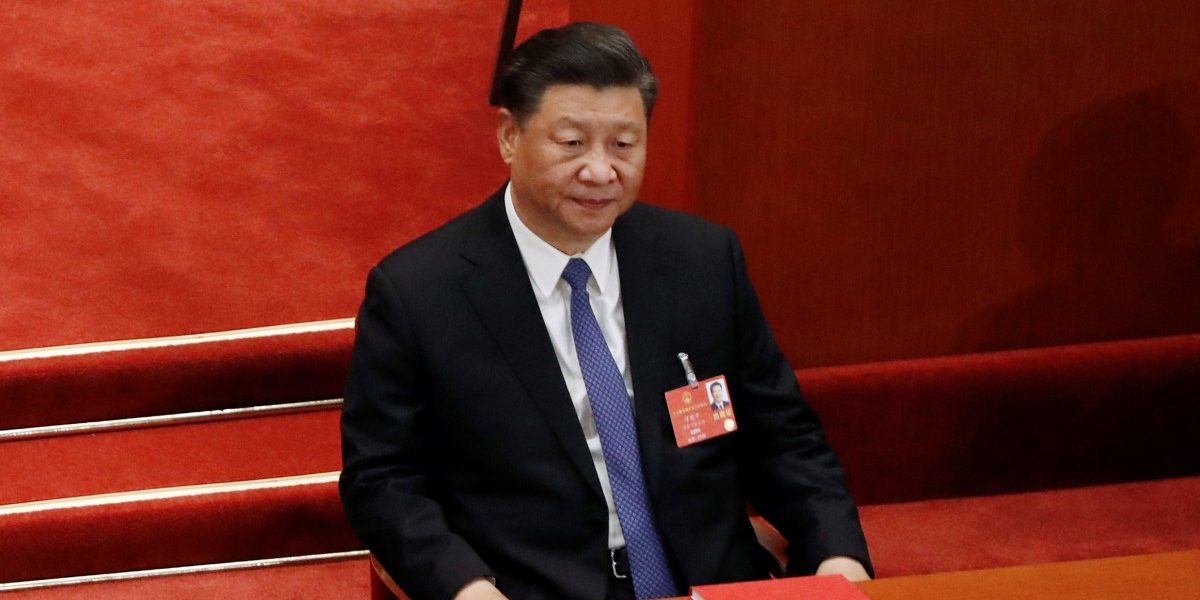 Chinese President Xi Jinping attends the closing session of the National People’s Congress (NPC) at the Great Hall of the People in Beijing, China May 28, 2020. Photo: Reuters/Carlos Garcia Rawlins

Judging by deployments and infrastructure that the PLA is putting in place in Tibet, and matching Indian responses, it will be a long haul before the pre-April status quo is restored, if at all. India has limited tactical options to restore the status quo without risking a more general conflict, and will now have to rebuild the deterrence that has clearly been lost. Unlike past confrontations and face-offs, the framing of the crisis by China as a sovereignty dispute — rather than as a border dispute which would be solved by give-and-take — makes it harder to settle. It also suggests that for China the issue is not just about the LAC or its clarification but is part of an attempt to exercise control up to its claimed boundary, and also serves larger political goals.

The big question: Why?

Why have India-China relations come to this pass despite Prime Minister Narendra Modi and President Xi Jinping meeting 18 times? For me, both our military and political strategy need to be rethought. I say so because militarily we lacked warning of what the PLA was doing, and were unable to deny them territorial gains at India’s expense. Clearly, a political strategy that relied on frequent high-level summitry, economic interdependence and engagement, and regular dialogue and communication to keep the peace has not worked.

The Modi government had been careful after 2017 not to offend China’s sensitivities on Tibet, the Belt and Road Initiative (BRI), and in its framing of the Indo-Pacific strategy. It had refrained from calling out China for occupying the Doklam plateau after the face-off in 2017. By acquiescing in China’s gains on the Doklam plateau and not responding to her political moves after 2016, we may have led China to conclude, rightly as it turned out, that India would not choose to mount a major military operation risking a broader war to prevent or reverse Chinese salami slicing in Ladakh, and that China could achieve her tactical goals and surprise at the same time. If we were to acquiesce again now, we would be reinforcing that lesson in Chinese minds, making deterrence even harder to restore. John Lewis Gaddis notes in his 2019 book, On Grand Strategy, that one of the most difficult challenges in national security policy is deciding when and where to draw a defensive line against expanding hegemonic adversaries. Once you draw that line, he warns, you must “be able to watch smoke rise on the horizons you once controlled without losing your self-confidence or shaking that of allies.” 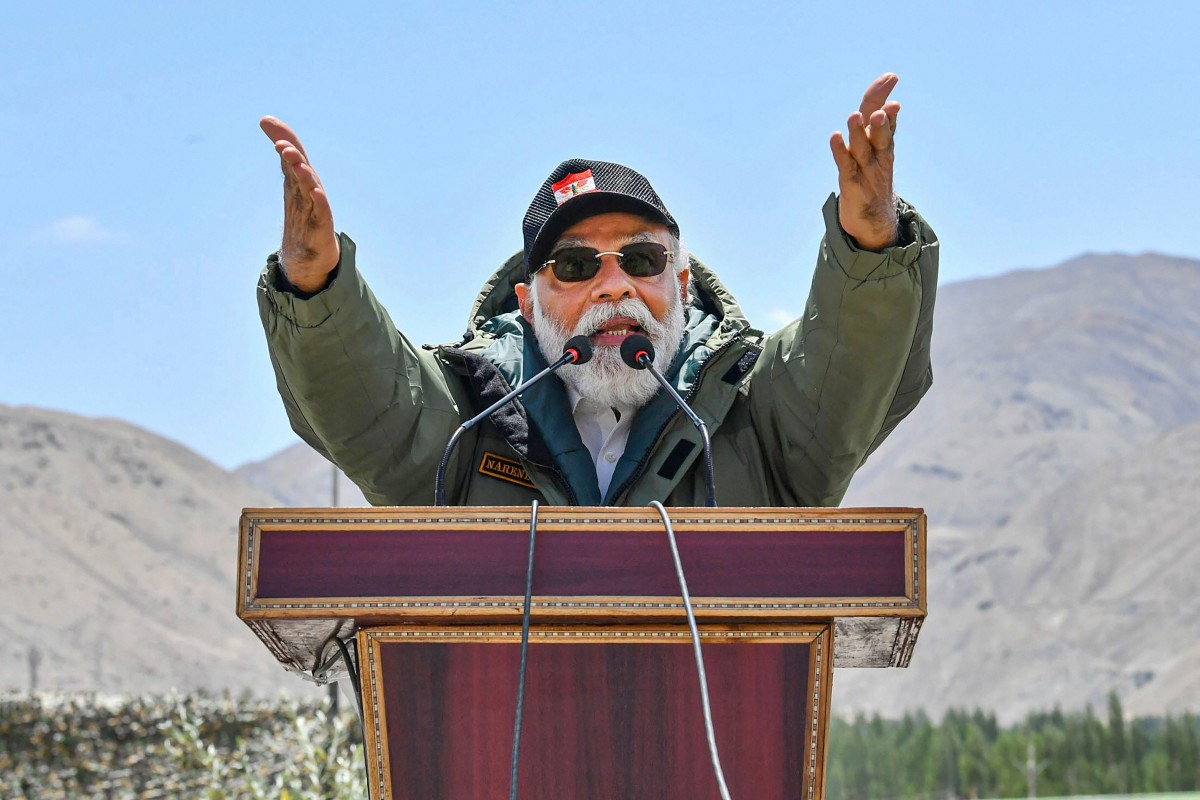 China operates abroad on her perception of the relative balance of power, both in history and since the founding of the People’s Republic of China (PRC). China was a loyal camp follower of the Soviet Union until Nikita Khrushchev indicated weakness by opting for peaceful coexistence with the United States and de-Stalinisation in 1956. China went along as a tacit ally with the US until her perception of US decline after the global financial crisis of 2008 when she struck out on her own assertive policy abroad. Hence the significance of how China read India’s responses to Doklam and thereafter.

There are tactical and operational reasons at play on the Chinese side. For about two decades, India has been building infrastructure along the border in an attempt to catch up with China’s buildup and the much easier access to the border that China enjoys on the Tibetan plateau. For instance, new roads like the Darbuk-Shyok-Daulat Beg Oldi road, the operationalisation of advanced landing grounds near the LAC, and other steps have improved Indian logistics. India raised two new mountain divisions in 2010 and approved a new mountain strike corps in 2013. Chinese moves this year could be explained as attempts to straighten and push the LAC westward to dominate, to take the heights, to cut off Indian forward deployments, and to isolate sub-sectors in the event of a conflict. If these considerations led to the Chinese actions this spring, they would indicate a much more significant role for the PLA in high-level decision making in Xi’s China.

But tactical military considerations are not a sufficient explanation for China breaking bilateral treaties and agreements reached with India since 1993, changing the rules of engagement that have kept the peace for 45 years, and the adverse — from China’s point of view — political consequences that could have been anticipated. Nor do they explain the timing of Chinese actions, or why China is simultaneously asserting herself across the board in Asia — in the Senkakus, on Taiwan, in Hong Kong, in the South China Sea, with Australia and so on, and her new “wolf warrior” diplomacy. A newly powerful China has less soft power influence internationally than at any point since the Great Proletarian Cultural Revolution (GPCR). A Pew poll out in late July says that only 23% of Indians look at China favourably. Chinese actions have actually brought about what China should be trying to deter or avert, namely, much closer coordination between India and the US on China.

What China hopes to gain

This, therefore, has to have been a decision taken at the highest level in China for larger strategic reasons, not just tactical military convenience. If I were to put myself in Chinese shoes, I would speculate that the potential strategic advantages to China of what she did this spring and summer in Ladakh were that:

Since the immediate trigger for the crisis is the change in Chinese behaviour, we must also look for explanations in China itself, in its internal stresses and leadership, and in its perception of the outside world.

India must now deal with changed Chinese behaviour not just on the border and against India. China now practices omnidirectional “wolf warrior” diplomacy. The Chinese Embassy in New Delhi even tries to tell the Indian media what it should and should not say. China is much more assertive in its dealings with the world. 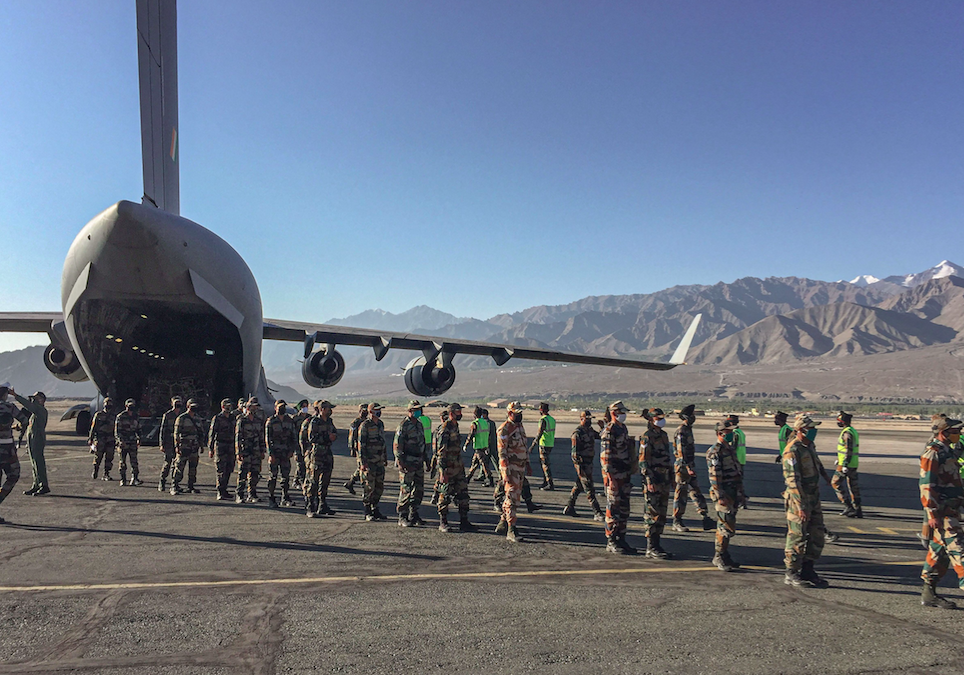 An Indian Air Force transport aircraft C17 brings essential supplies to an army base in Ladakh on September 15, 2020, as the security forces gear up for winter amid tensions at the LAC. Photo: PTI

China is in the midst of a triple transition or learning: For the first time in China’s history, she is both powerful and dependent on the rest of the world for commodities, energy, technology and markets; she is trying to become a maritime power for the first time in her history; and, she is entangled in disputes all along her eastern, southern and south-eastern periphery (but not the north!)  Her ethnic nationalism and authoritarianism are both a strength and a weakness. Lee Kuan Yew once said that he thought China would not achieve its goal of surpassing the US as a global power because the US can draw on the talents of the entire world and recombine them in diversity and creativity that is not possible with China’s ethnic nationalism.

Also read: When it Comes to China, India Needs to Up its Deterrence Game

Today China displays both great confidence and a sense of victimhood. As vice-premier and politburo member Liu He said recently that “bad things are turning into good ones,” referring to China’s success in suppressing COVID-19 and in recovering growth in the economy in the last quarter. The global pandemic and economic crash have left China relatively better off than other major powers, which are internally preoccupied and diminished. China too has suffered considerable loss of reputation and economic harm, but less than the others. However, the US election campaign has probably been seen in Beijing as final proof that China-US contention is now structural and that their relationship is turning increasingly antagonistic, despite economic co-dependence.

Besides, the worsening global economic prospect makes China’s Dream harder to attain, both economically and by promoting other countervailing ethnic nationalisms around China. All in all, it could be a combination of Chinese hubris, awareness of a deteriorating external situation and hard times to come, and internal leadership and economic stresses, all at the same time which might explain China’s recent behaviour which shades between assertiveness and aggression.

Misreading the external situation, where there is really no existential threat to China, and overestimating China’s ability to shape the international environment could go together with elite dissension, resulting in the assertive and confrontational China that we see.